This year at Tesla's annual shareholders meeting the conversation went pretty much as we'd expect, with teases of some upcoming products, muttering about negative media coverage and plenty of confidence from CEO Elon Musk. Specifically, he responded to speculation that Tesla is having trouble meeting sales targets by saying that "I want to be clear, there is not a demand problem." According to the company, 90 percent of sales for the Model 3 are going to people who aren't reservation holders, and later on during the event Musk indicated Tesla still isn't thinking of running advertisements.

Noting that electric cars introduced recently still don't have more range than the original Model S when it launched in 2012, Musk said that it won't be long before Tesla offers an electric vehicle capable of going 400 miles between charges. 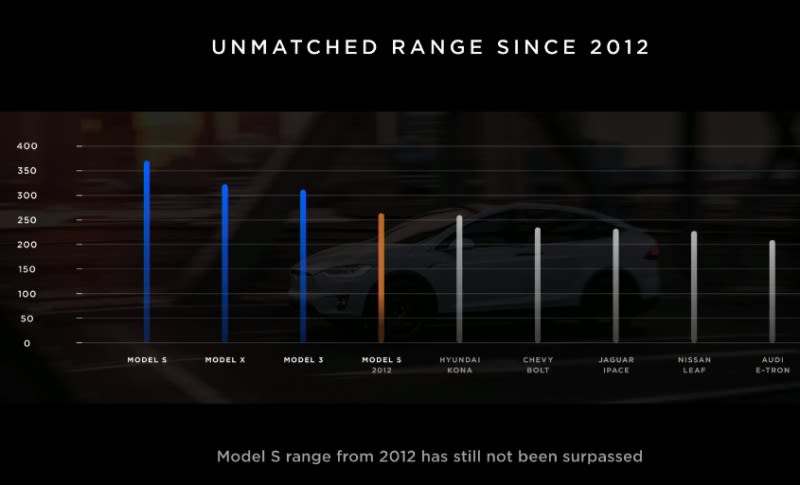 Among the anecdotes revealed during Musk's speech or in response to questions from investors, we heard that Tesla plans for the Model Y crossover to be "vegan" and free of animal products like leather, even though making a heated steering wheel without it has been tough. Of course, the Model Y is just one of several products in the pipeline, and along with the Tesla Semi, the CEO mentioned Tesla's pickup truck project.

The company has Ford's F-150 in its sights (which is probably why Ford is working on electric models of its own), and Musk called it out as a "great truck, and top selling vehicle in the US." The "Cyberpunk truck" hinted at on a slide is being designed to "meet or exceed an F-150 -- if the F-150 can do it then a Tesla truck should be able to do it." He also said that if "you're driving it down the road, it will look like it came out of a sci-fi movie" and called it "the coolest car I've ever seen." While the Model Y is still on track to launch in 2020, the company hopes to unveil its pickup truck toward the end of this summer.

Finally, in response to one of the last questions of the evening, Elon confirmed the company does have a design for a "submarine car," that could turn up as a show car at some point, even though the market for such a vehicle would be "small but enthusiastic."

In this article: Cyberpunk Truck, ElectricVehicle, ev, gear, model 3, model s, model y, pickup truck, shareholders meeting, submarine car, Tesla, Tesla Semi, transportation
All products recommended by Engadget are selected by our editorial team, independent of our parent company. Some of our stories include affiliate links. If you buy something through one of these links, we may earn an affiliate commission.