Where ‘The Outer Worlds' gets its sense of humor

In The Outer Worlds, there are specially bred swine called "cystypigs." You find them in a factory farm near Fallbrook, a smuggler's town on a distant planet. Maybe you climbed through the sewers and emerged face to ass with one, or entered through the front door for a sweeping view of their pens. But there they are: swine coated in bulbous, meaty tumors that swell up, drop off and are ground and canned to be sold commercially as "boarst wurst." As one in-game ad says: "You haven't tried the worst until you've tried boarst wurst."

Megan Starks was part of the team that authored this sick scenario. A senior narrative designer who holds an MFA in creative writing, she pens plot-lines, dialogue, characters and even item descriptions at Obsidian Entertainment. After writing for dense RPGs like Tyranny and Pillars of Eternity II, she's now working on the developer's latest ambitious universe, set in a hyper-capitalist dystopia run by competing corporations. You'll roam frontier space colonies covered in wild flora and fungi as well as wilder humans. It lands October 25th on PS4, Xbox One and PC.

What truly makes the new title appealing is its rich world and absurdist sense of humor. "Leonard is much more of the darker philosophical emotional impact-type humor, and Tim is a little more upbeat and kind of that Futurama style," said Starks. "It's blending the two together that creates the unique sense of humor in The Outer Worlds." 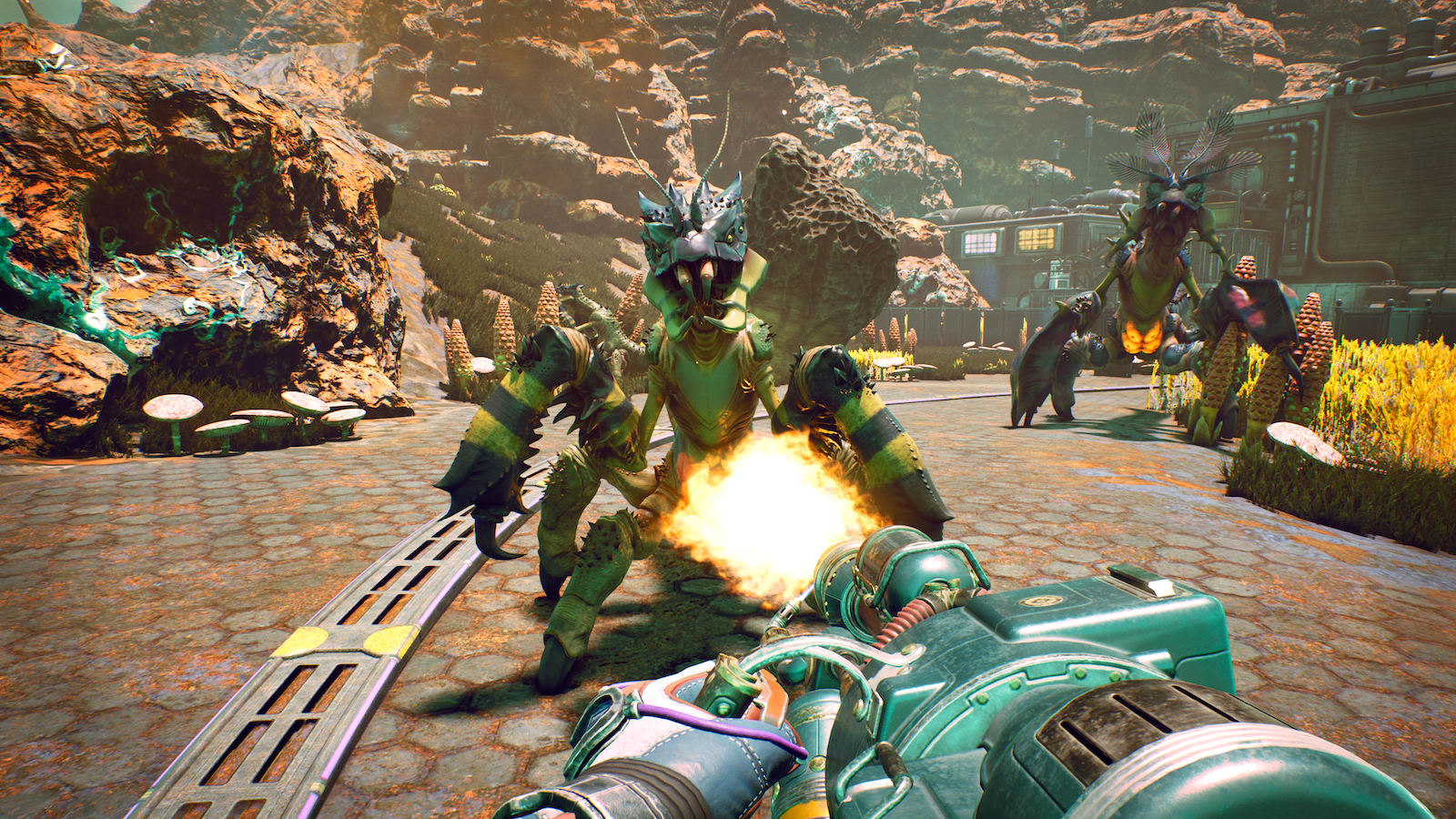 Starks cites the TV show Firefly, the film Brazil and the Coen Brothers as part of the team's inspiration. David Williams, lead systems designer at Obsidian, said Wes Anderson films like The Grand Budapest Hotel and The Life Aquatic with Steve Zissou lent their whimsy.

The juxtaposition of dark apocalyptic moments and biting satire made New Vegas feel like a living world a player desired to inhabit. From observing gameplay at E3, The Outer Worlds has the same allure, right down to the puns and quips. It doesn't just tickle you for escapism, but it creates levity in a potentially grim world in danger of taking itself too seriously.

Part of the fun comes from the protagonist -- you -- subverting the rules of a rigid, corporate world. "The player is not trapped in the same oppressive system that other characters in the game are, because you're coming from outside of the colony," Starks said.

What Starks brings to the writing team skews towards the darker, violent side of the comic spectrum. "Part of why I got hired was because I usually play chaotic-evil in RPGs," she said. One example: A smarmy character in The Outer Worlds' Fallbrook that either wants to con you or recruit you in his con. He keeps winking your way. "You can basically punch him in the eye," Starks said. "If he does it again you can punch him in the other eye." 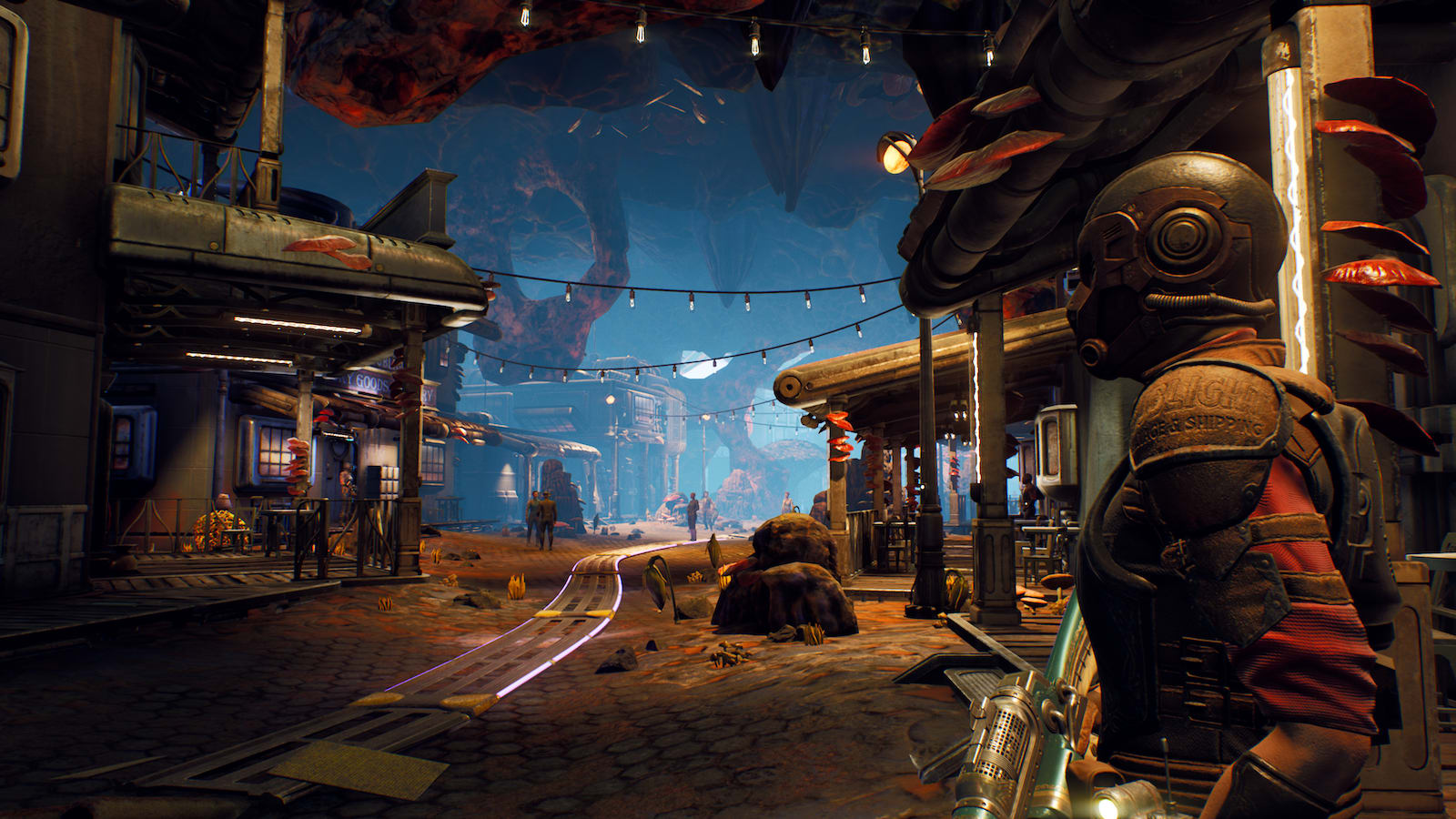 The town of Fallbrook

Starks also wrote Clive, the creepy owner of the mutated pig slaughterhouse, who calls himself "the boarst king." Starks said she thought it'd be "funny" to make him a serial killer who's probably also a cannibal.

In the game, you have the option to disguise yourself as an employee and enter through the factory's front gate. You tell the guard you lost your keycard, and she responds that this amounts to two infractions. Earn a third and you're sent to have "dinner" with Clive.

When you eventually find the boss in his office, he's spattered with blood and preparing his meal. "I was just killing... some time," he says. Threaten to murder him -- the original mission you've been sent on -- and Clive will try to cut you a sweet deal for changing your mind: a lifetime supply of boarst.