The best weapon in 'Cyberpunk 2077' is a glowing orange garrote

The future is multifunctional.

Nanowire is the Swiss Army garrote of the future. The glowing orange thread is simple yet multifunctional, slicing through skin, muscle and bone like a whip. Or, it flings from the wielder's wrist like an electric snake to jack into the side of someone's head and hack their brain to bits.

Nanowire is one of the latest weapons revealed in Cyberpunk 2077, the new game from The Witcher studio CD Projekt RED. It's due to come out on April 16th, 2020, complete with Keanu Reeves in the supporting cast.

No one outside of CD Projekt RED has actually played Cyberpunk 2077 yet, but it's made a significant appearance at E3 for the past two years. Developers sit down in a packed, dark theater on the second floor of the Los Angeles Convention Center and play through a 50-minute chunk of the game, live, narrating the experience as they go. 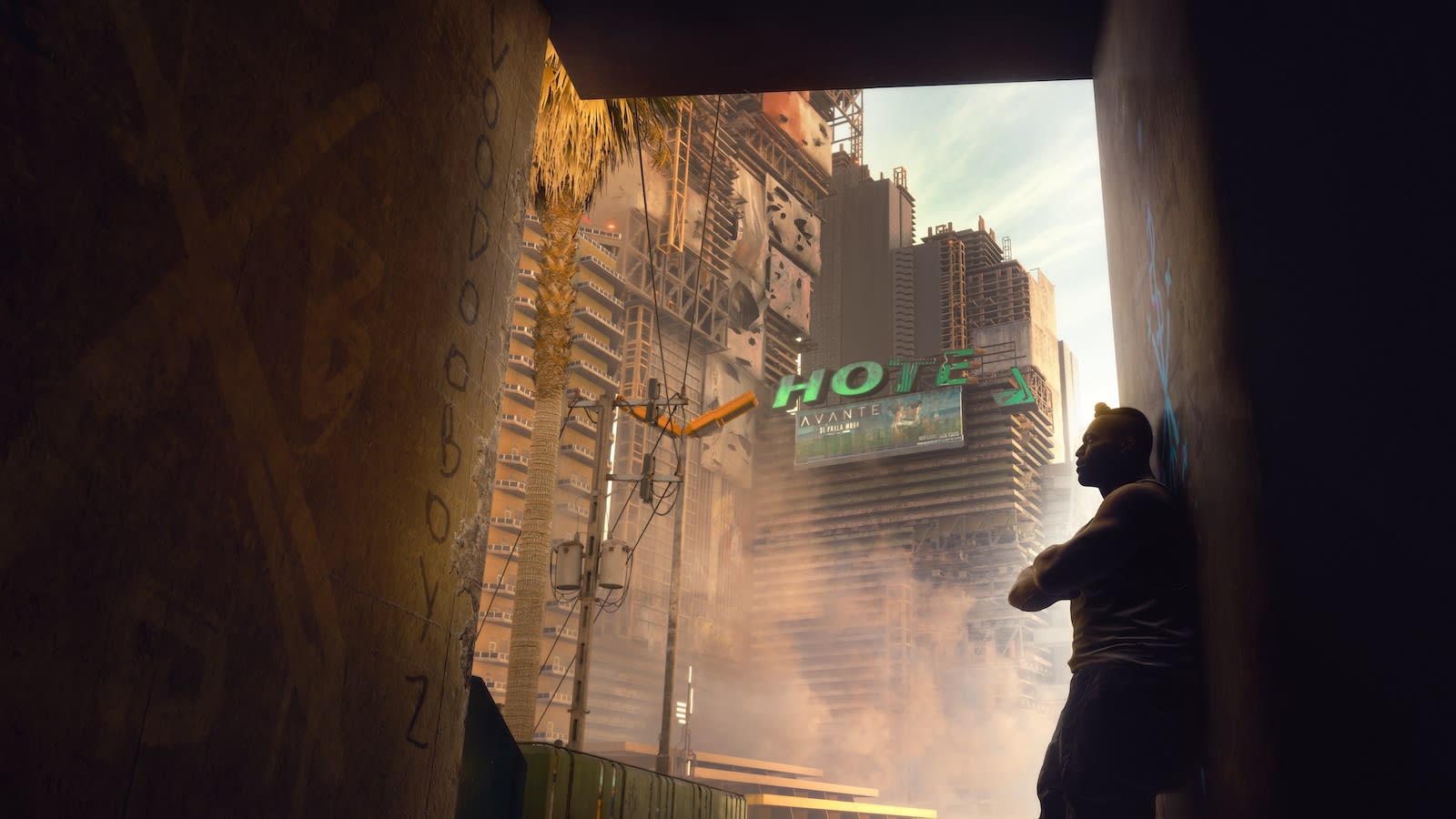 This year, the demo kicks off deep in Night City, a transhumanist mecca between San Francisco and Los Angeles. V, the customizable protagonist, is picking up a new mission to infiltrate a dilapidated compound on the edges of society. The area was once destined to be a paradise resort town for the ultra rich, but the global economy crashed and every corporation pulled out of the project. Now, the towering concrete hotels and malls sit in clouds of dust, windowless and draped in ripped banners. Even the police have stopped coming here.

V meets up with Placide, the interim leader of a gang that controls the unregulated, unincorporated city. They walk past makeshift food stalls and hang-out spots, with habitants talking amicably to Placide along the way. The gangs of Night City may be brutal, but some of them are pillars of support in their communities, developers remind the room.

Placide and V talk, revealing rich dialogue trees that change depending on which specialty players choose to equip. This V is a Netrunner, which grants him special hacking and tactical abilities, and he comes from a corporate background, meaning he has additional conversation options in white-collar situations. Neither of these skills help him with Placide, who hacks into V's brain so he can monitor the mission in real-time.

V is tasked with taking out the Animals gang, a group of bulbous, muscle-obsessed bodybuilders and fighters who use the latest technology to bulk up. As a Netrunner, V sneaks around the compound, stealthily taking down lookouts and hacking his way past groups of Animals. His patience pays off. V observes a room for 10 seconds or so, and then remotely takes control of a boxing robot, making it punch an Animal in the face so hard that he falls to the floor, bleeding. He spots someone preparing to use an electronic bench press and hacks it, crushing the muscly dude beneath in a spurt of blood and gurgles.

He didn't have to do that -- the entire game can be completed without killing anyone, developers said.

The entire game can be completed without killing anyone.

Sasquatch is the leader of the Animals, and even in a hideout filled with gargantuan humans, she's clearly ultra-powerful. A glowing purple substance sloshes around in a tube on her back, granting her extra strength as well as immunity to damage and pain. V shoots out the tube, dodging swings of her giant hammer, and takes her out with a few rounds of his rifle.

In fights with hordes of Animals in subsequent rooms, V uses offensive hacking techniques -- he takes over a turret, making it shoot Animals instead of him. He hacks Animals' robotically enhanced limbs, making one pull a grenade on himself. And then he pulls out the Nanowire, flinging it across the room to connect with an enemy's head, frying his brain. That same wire shoots out like a whip, too, flaying and sliding through limbs like butter. 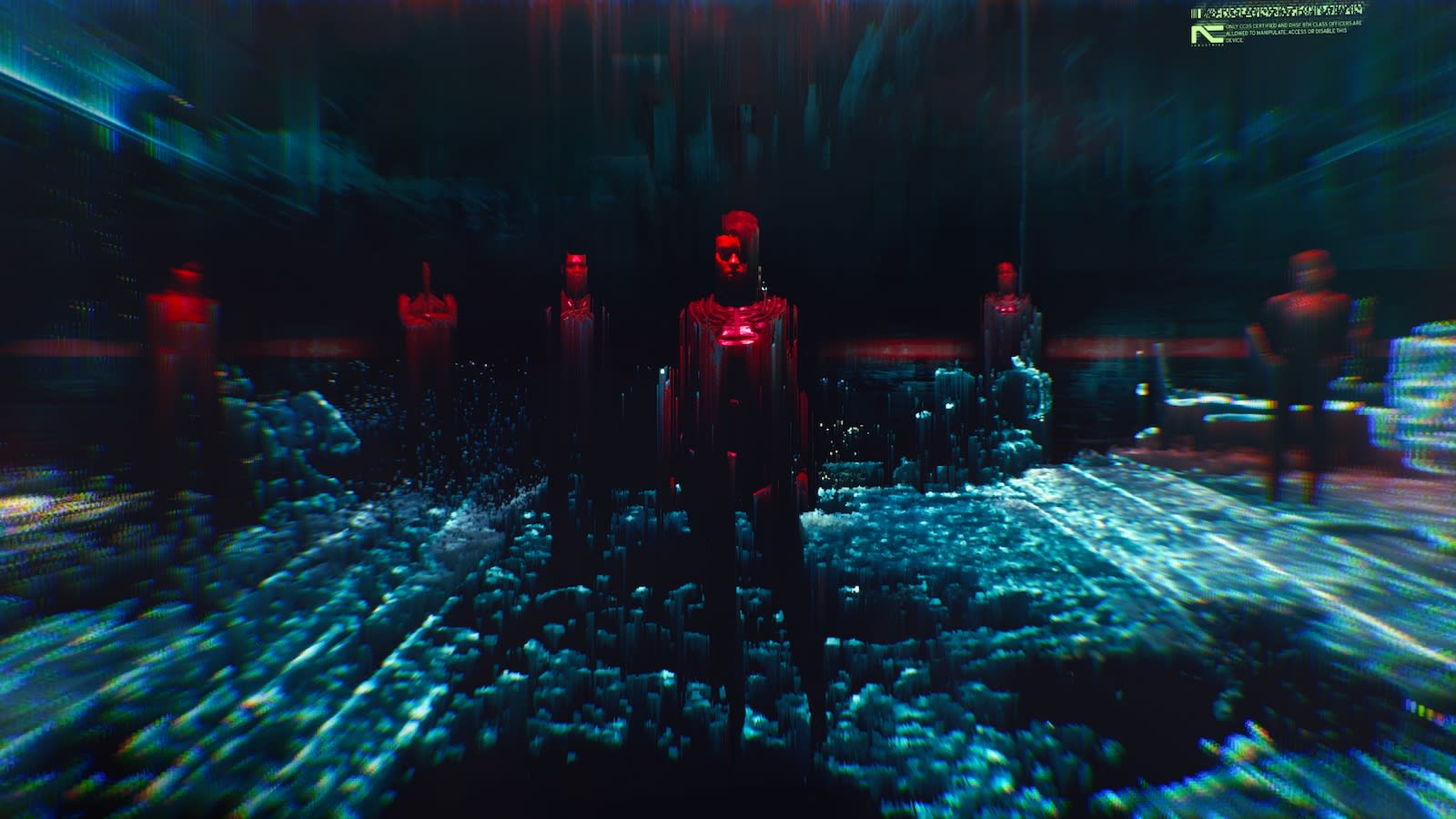 Throughout the demo, Keanu Reeves' freshly revealed character, a cyber ghost whose image glitches in an out of focus, provides snarky commentary and charmingly aloof vibes. The 50-minute peek closed out with V sinking into an ice bath and plugging directly into cyberspace, transporting her consciousness to a black void striped through in neon blue and red, vague forms of people darting from place to place in rapid glides. There, she's introduced to the black wall, a mysterious point in the 'net that has claimed the lives of every traveler who's stepped beyond. Apparently, V is going to be the first explorer to return.

I've seen two hours of Cyberpunk 2077 at this point, and one conclusion rings out loud and clear: This game is dense. These contained slices contain dozens of layers of customization and control, from skill trees to upgrades to individual dialogue choices, allowing players to craft a tailor-made tour through Night City. For now, though, the only way we've seen Cyberpunk 2077 is how CD Projekt RED wants us to, with carefully scripted playthroughs in a shockingly reactive and living world.

All I'm saying is, when I'm in control of V, I'll use the Nanowire a lot more.