In 'John Wick Hex,' time is the most precious commodity

Mike Bithell, the creator of John Wick Hex, is showing off the game for the first time at E3 2019, in a mirrored room at the Hotel Figueroa that feels ripped right out of The Continental. In his game, every time a player chooses to shoot, the miniature version of John Wick fires two rounds, because, after all, John always double-taps in the movies.

He also manages his ammo meticulously, counting his shots and fully emptying a magazine before reloading. So, that's how it works in John Wick Hex, too -- players have 15 bullets, and if they reload before firing them all, those leftover rounds are lost forever. Even the way John moves in the game, viewed from top-down in a saturated, comic-book style, comes from working directly with the films' stunt coordinator, JoJo Eusebio.

"There's a move in the game where you're pushing people around. There's never a shot in the movie where anyone actually does that, because in a movie, a five-meter push-back isn't the most interesting. But in a game, it makes sense. And working out how to make that work in a John Wick game was interesting -- literally turning to JoJo with cubes moving around and saying, 'We need something for that.' And him saying, 'Stand up, let's go.'" 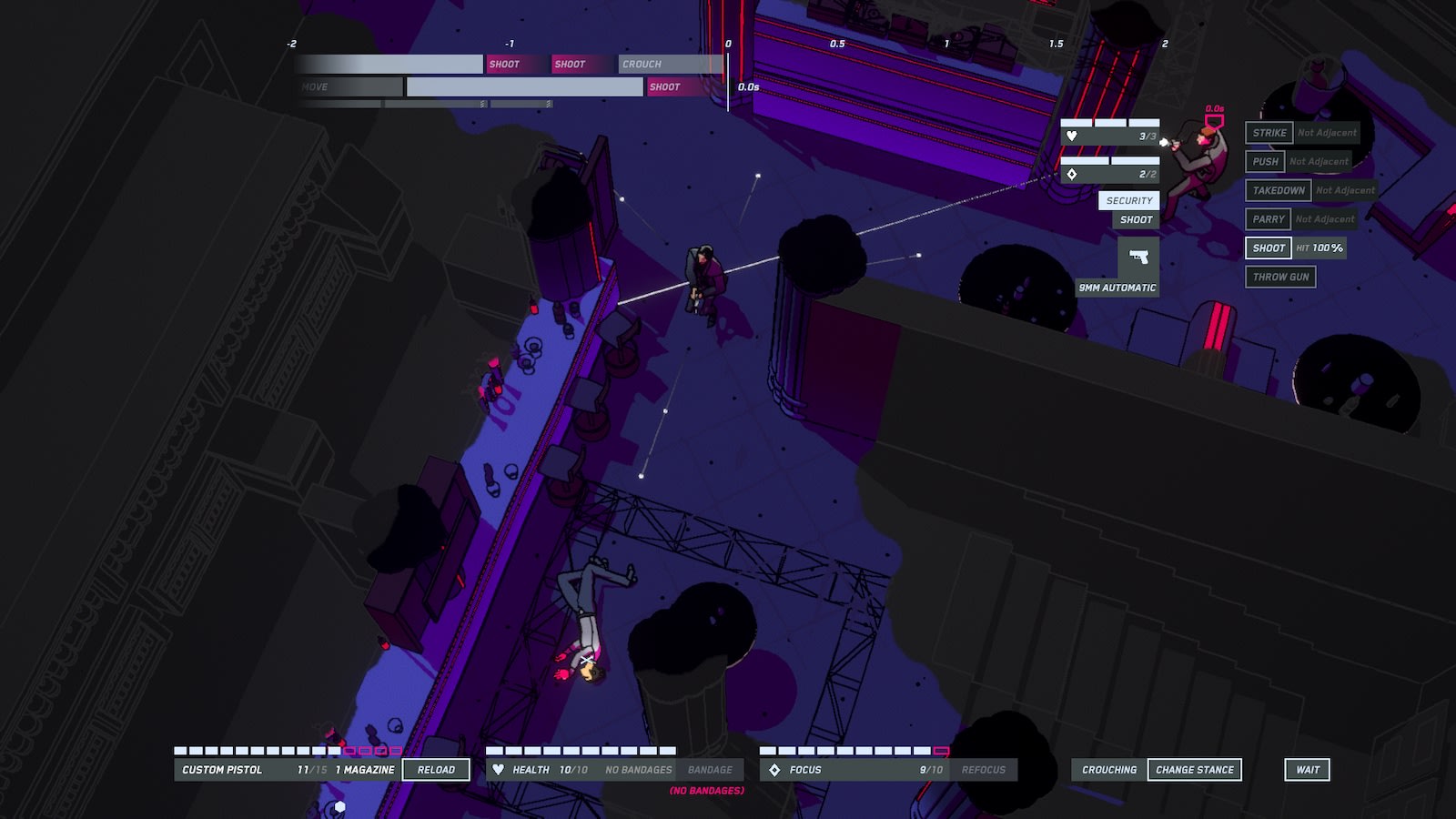 John Wick Hex is a top-down strategy title on a hexagonal grid, though it ditches the genre's expected mechanic of turn-based combat. Instead, John Wick Hex is all about time management. John's moves are broken down by the millisecond, as are his enemies', and players pick his next action by comparing his projected time with the coming attacks from sneaky foes creeping around corners. A series of bars stretch vertically across the top of the screen, displaying the time information for each on-screen character in a manner that should be familiar to anyone who's edited video or multiple audio tracks.

The end result is a stylish and smooth tactical experience with a rich array of actions to take at any given moment. Crouching, for instance, allows John Wick to roll and steadies his gun, boosting his chances of landing a shot. Alongside health and ammo bars, there's a Focus meter that allows players to parry incoming shots; it runs down as things get hectic, tempting players to spend some time -- the most important commodity in John Wick Hex -- replenishing it in the middle of a fight. 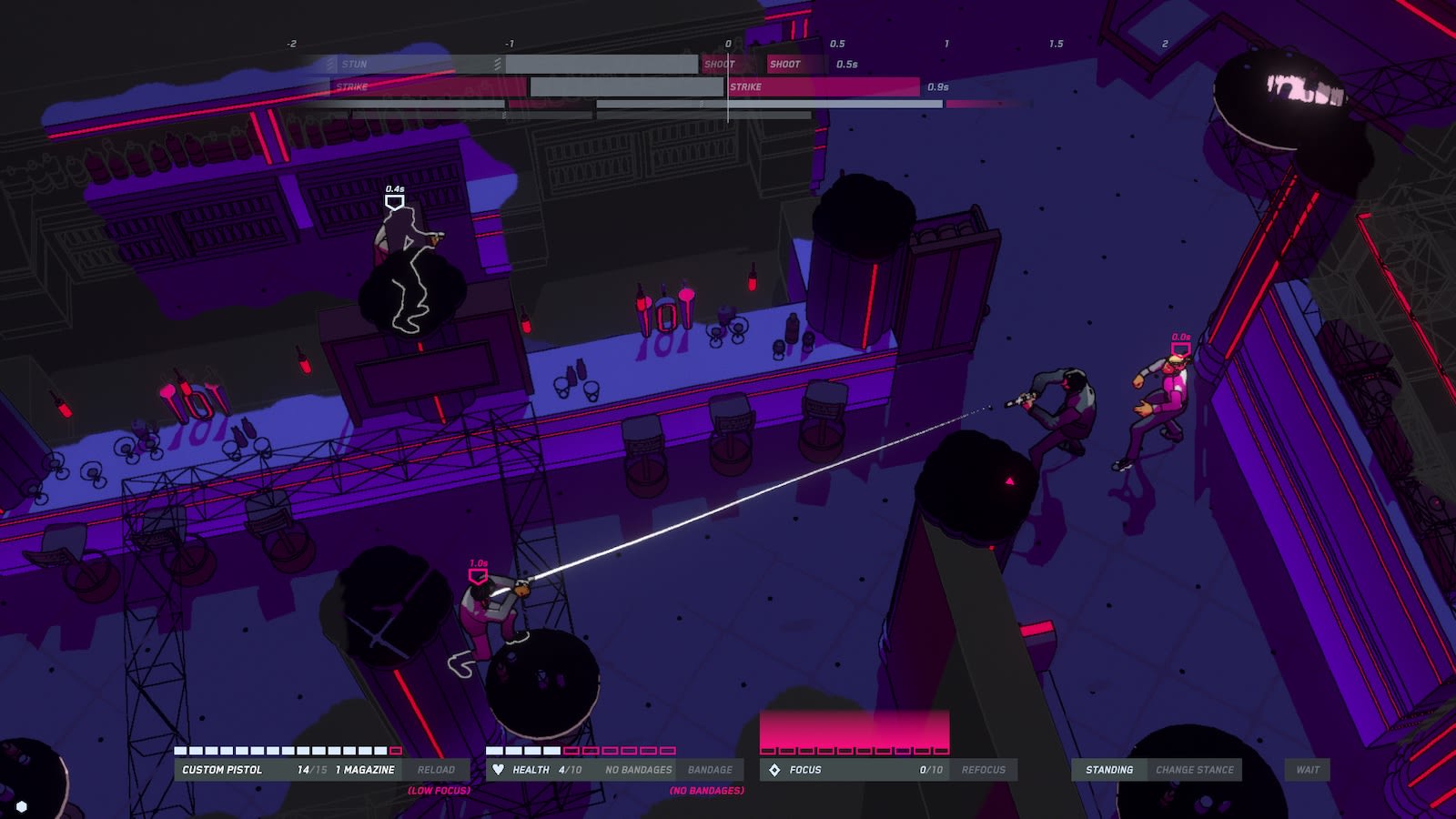 The millisecond-based twist on the strategy formula stemmed from a conversation with executives at Lionsgate, the studio behind the John Wick films. Bithell was showing off an early, turn-based version of the game to producer Jason Constantine, who asked, "Why is John Wick waiting his turn?"

"I literally was in a big Hollywood conference room and I was bringing up videos of other strategy games, going, 'This is the genre, this is how it works,'" Bithell said. "And then just this moment of horror -- I bet it crossed my face but it definitely was inside me -- just like, 'I'm an idiot.'"

John Wick Hex doesn't have an official release date just yet, but it's heading exclusively to the Epic Games Store before hitting other platforms, including consoles.