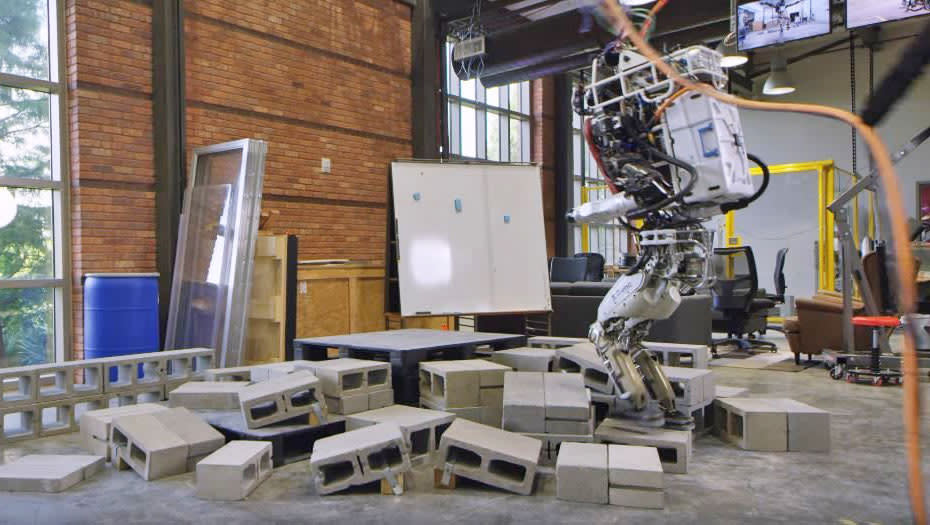 Some of the biggest challenges for machines are tasks that are simple for humans. From mathematical puzzles like the famous traveling salesman problem to combining inputs from various senses, there are many functions that us dumb humans excel at but robots or AI struggle with. But robots are catching up at last, judging by this new video of the humanoid robot Atlas.

When Boston Dynamics created the Atlas robot for a DARPA challenge in 2013, it could walk but its steps had to be determined by a human operator and inputted through a user interface. The robot has been considerably improved since then and has shown an impressive degree of agility, but it still had a tendency to fall when walking. Especially when a surface is uneven, it's hard for legged robots to calculate where to place their feet to keep their balance upright.

New software now from the Institute for Human and Machine Cognition (IHMC) lets Atlas walk with a human instructing it. The software surveys the environment using the robot's sensors and segmenting it into sections. Each section is then interpreted into a series of polygons to create a model of the environment, so the robot can plan out each of its steps to get from its starting point to its goal.

This means Atlas can cover both flat and rough terrain and squeeze between narrow spaces. This is important for the aim of aiding in disaster areas, in which fallen rubble makes it difficult for traditional rescue services to get access.

Another robot developed by NASA's Johnson Space Center, called Valkyrie, has a similar trick up its sleeve, planning only a few steps ahead as it moves. This means it can adapt to changes in its path or goal very quickly.

Combining the two insights from both Atlas and Valkyrie, robots can now walk over flat ground, stepping stones, stairs and piles of cinder blocks. It looks like robots could be acting as first responders and delivering packages sooner than we thought.

In this article: Atlas, Institute for Human and Machine Cognition, robots, tomorrow, Valkyrie, walking robot
All products recommended by Engadget are selected by our editorial team, independent of our parent company. Some of our stories include affiliate links. If you buy something through one of these links, we may earn an affiliate commission.