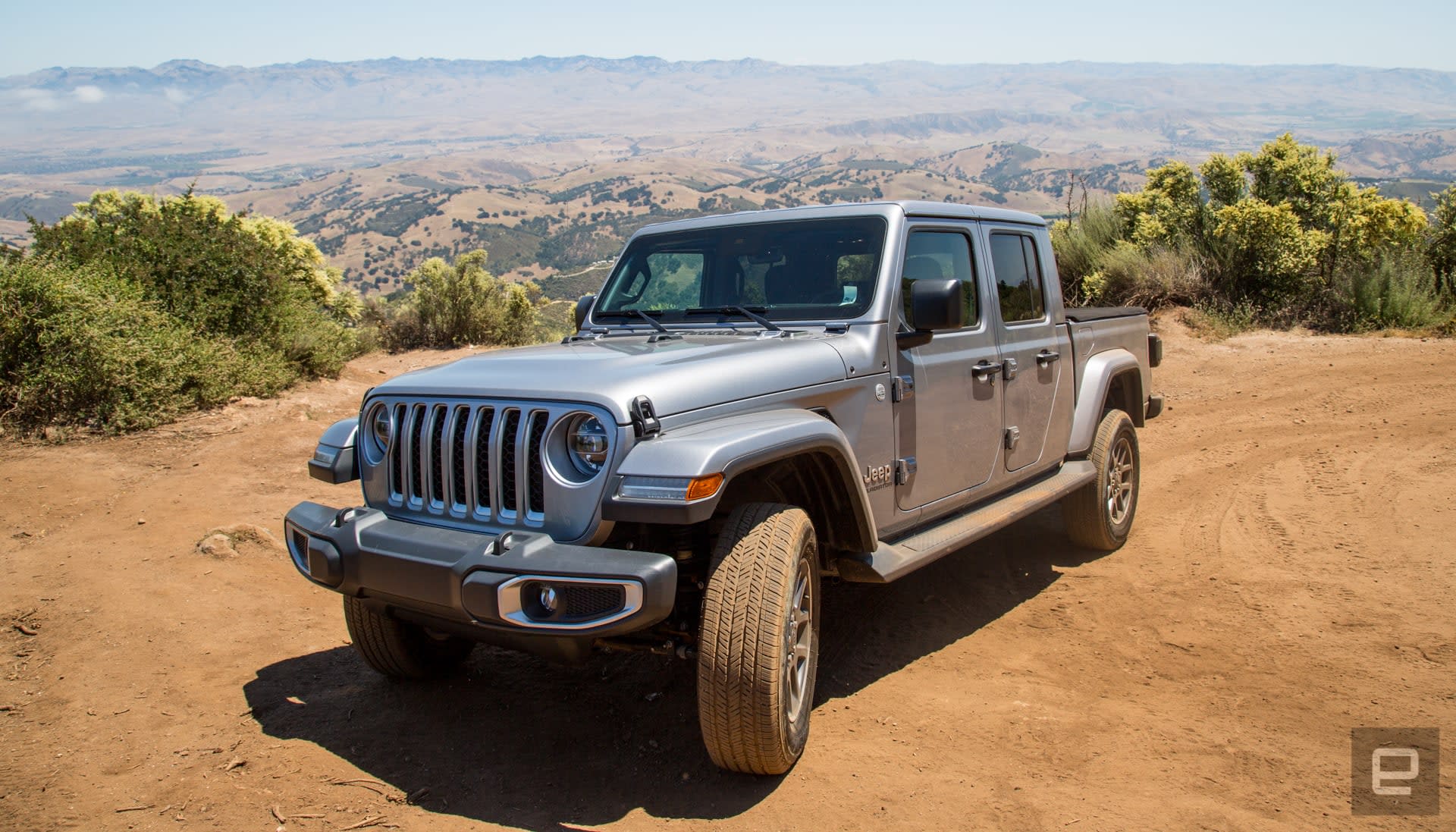 The Jeep Gladiator is for truck buyers craving adventure

A classic gets updated with modern tech amenities.

Running alternative life scenarios is fun. In one reality I did well in high school and used my experience in FFA (Future Farmers of America) to major in agricultural science at Cal Poly San Luis Obispo. In that timeline, I move to Hawaii and use my horticulture degree to work on a pitless avocado. In that alternate universe, the $33,545 Jeep Gladiator fits into my life like a well-worn, clay and fertilizer-stained glove. Alas, it does not fit in my current urban existence. But that doesn't stop me from enjoying what it is, what it can do, and the sheer ridiculousness of it. 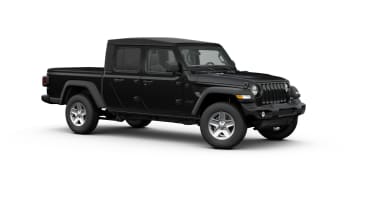 The Gladiator is essentially a Jeep Wrangler with a bed strapped onto the back. That's really it. Yet, that Jeep pedigree immediately gives it off-road credibility. During my tests, I found it to be capable on both dirt and asphalt. But it's not for everyone.

The true mark of a Jeep is its ability to drive over stuff. Even with a bed attached to it, the Gladiator made short work of the offroading trials I subjected it to. It handled deep ruts, rock accents and descents and generally had no problem crossing paved paths. I will note that I did not push the vehicle to its limit. But I did drive it on steep, rocky terrain that most owners will never encounter. All you hardcore off-road folks out there, get yourself a Wrangler -- the shorter wheelbase makes it a more capable boulder-crawling machine.

That said, the Gladiator is available with the same "Rubicon" trim level off-road package, which includes a front-facing camera to help navigate trickier terrain and a front sway bar that electronically disconnects for more articulation over very bumpy or rocky segments. Sadly, I didn't get a chance to test that version of the Gladiator. But the Overland edition (along with the rest of the lineup) has 11.1 inches of ground clearance and can drive through up to 30 inches of water. So, yeah, it's more than adequate for most drivers looking for a little adventure. 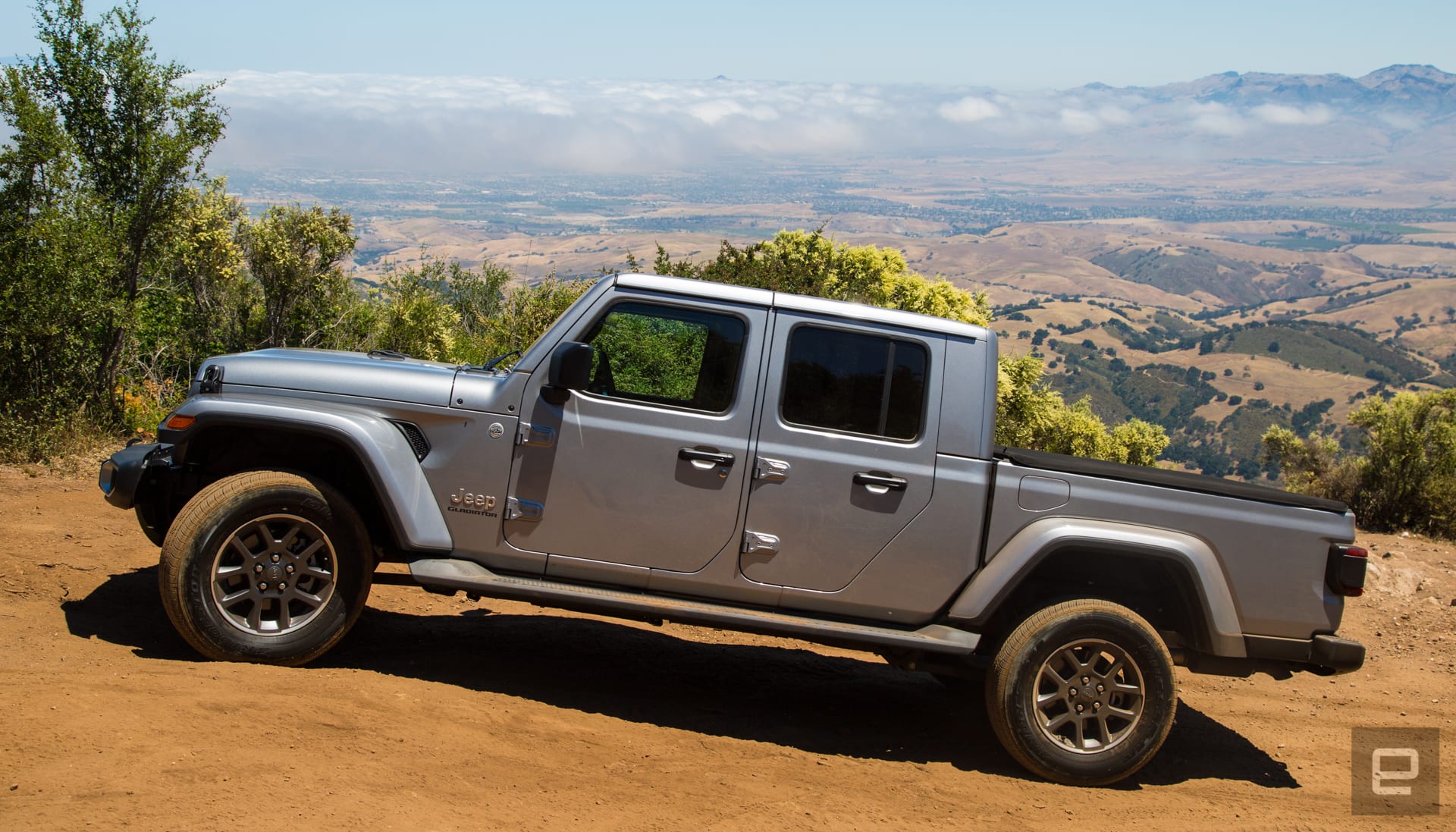 While driving offroad is a great way to spend the day, the reality is most Gladiators will be cruising highways and mall parking lots. In that respect, the Gladiator reminds you it's an SUV rooted in the 1940s. And, much like a Harley-Davison, it's never going to stray too far away from its past. Fortunately, it's been updated to offer many of the tech features people come to expect from a modern vehicle. For example, it has adaptive cruise control, which is on par with most mid-range vehicle systems on the market. In my tests, it handled cut-ins without issue and solidly tracked vehicles on the highway. But it doesn't have lane-keep assist. In fact, the steering is actually pretty loose. Which is exactly what you expect from the Jeep, but those new to the brand might find it lacking compared to other trucks.

That's the overarching theme of the Gladiator. For everything that's fun and exciting, there's a caveat that requires a certain type of driver who will overlook it for a chance at adventure. For example, it's a convertible. You can get it with a soft-top or hardtop. Awesome right? But for the hardtop, you don't have anywhere to safely put those panels other than the backseat if you decide to go topless while driving. You can also remove the doors and windshield. Which is amazing. But it's a bit of a pain and, like the hardtops, you need to plan ahead and remove them before going out for a drive.

Of course, all those removable cabin parts lead to more road noise while driving. It's not a deal-breaker, but it's definitely noticeable. I was able to have conversations without yelling, but if you're the type of person who's become accustomed to the near-silent interiors of modern vehicles, you're in for a surprise.

Fortunately, the interior is comfortable, not to mention roomy for a truck. I had no issues with leg or headroom in the front or back seats. The seats aren't what you would call luxurious or plush, but while driving five hours on the highway and five hours offroad in a single day, I didn't experience anything more than the usual fatigue you'd feel while driving a truck. 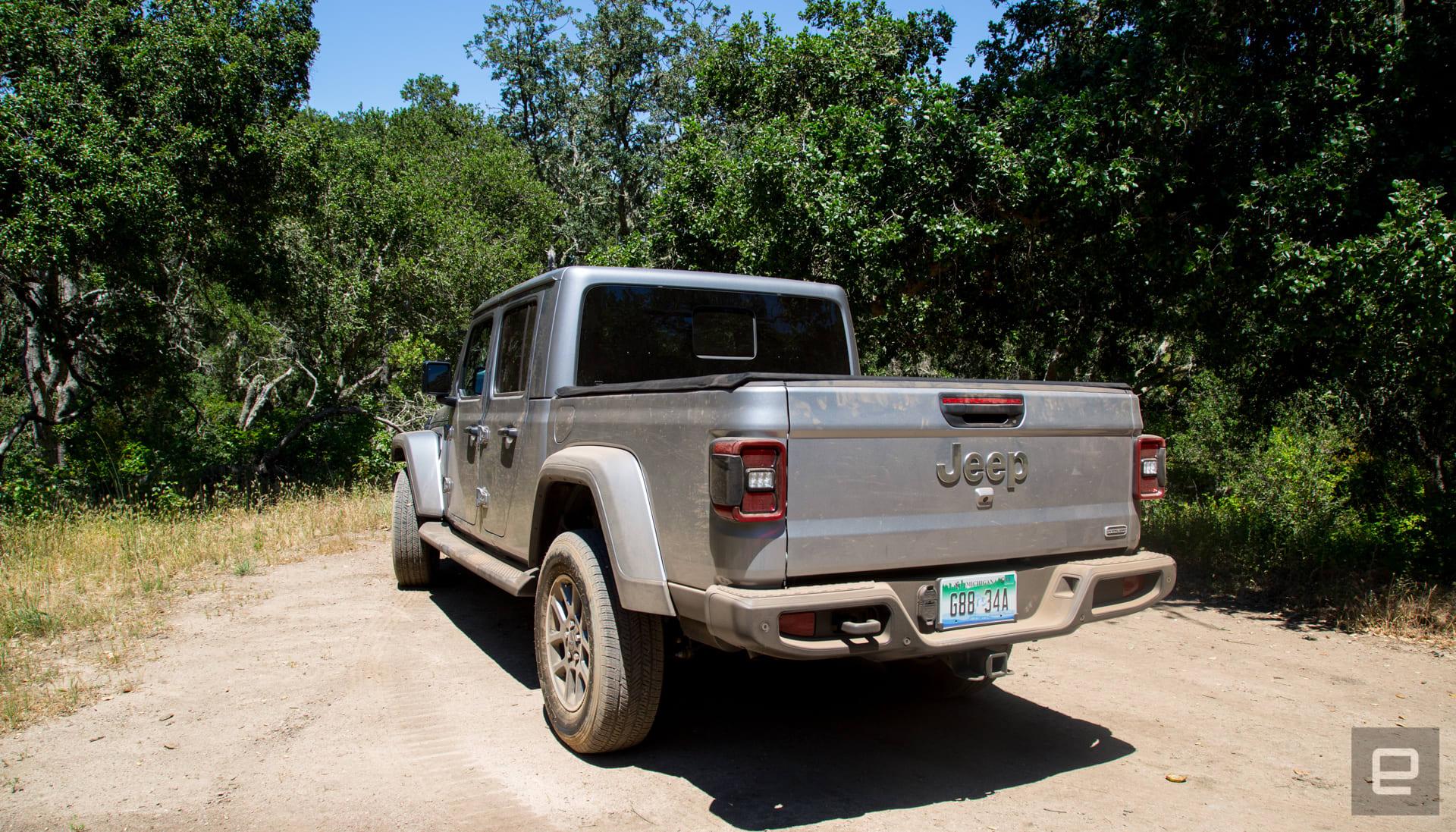 What's nice is that the cabin still has that Jeep flair while incorporating current technology. There are optional heated seats, it has enough USB ports for all the passengers to keep their phones charged, dual climate control is available, and the infotainment system supports CarPlay and Android Auto.

The infotainment system itself is better than I expected, thanks to some fun flourishes like pins that enlarge when you do things like turn up the volume. I didn't encounter any noticeable latency while using it, either. The mapping feature is adequate, but I suspect most folks will just use Waze or Google Maps.

Regardless of how you get to your destination, the rear seats hold some interesting little surprises. Like an optional $300 Bluetooth speaker that resides behind the passenger-side back seat. It's always charged and ready to go. If you end up taking all the doors and top off, there's a hidden storage area under the rear seats. It comes standard, but you'll have to pony up some more cash to convert it into a lockbox. I suggest doing that for peace of mind. 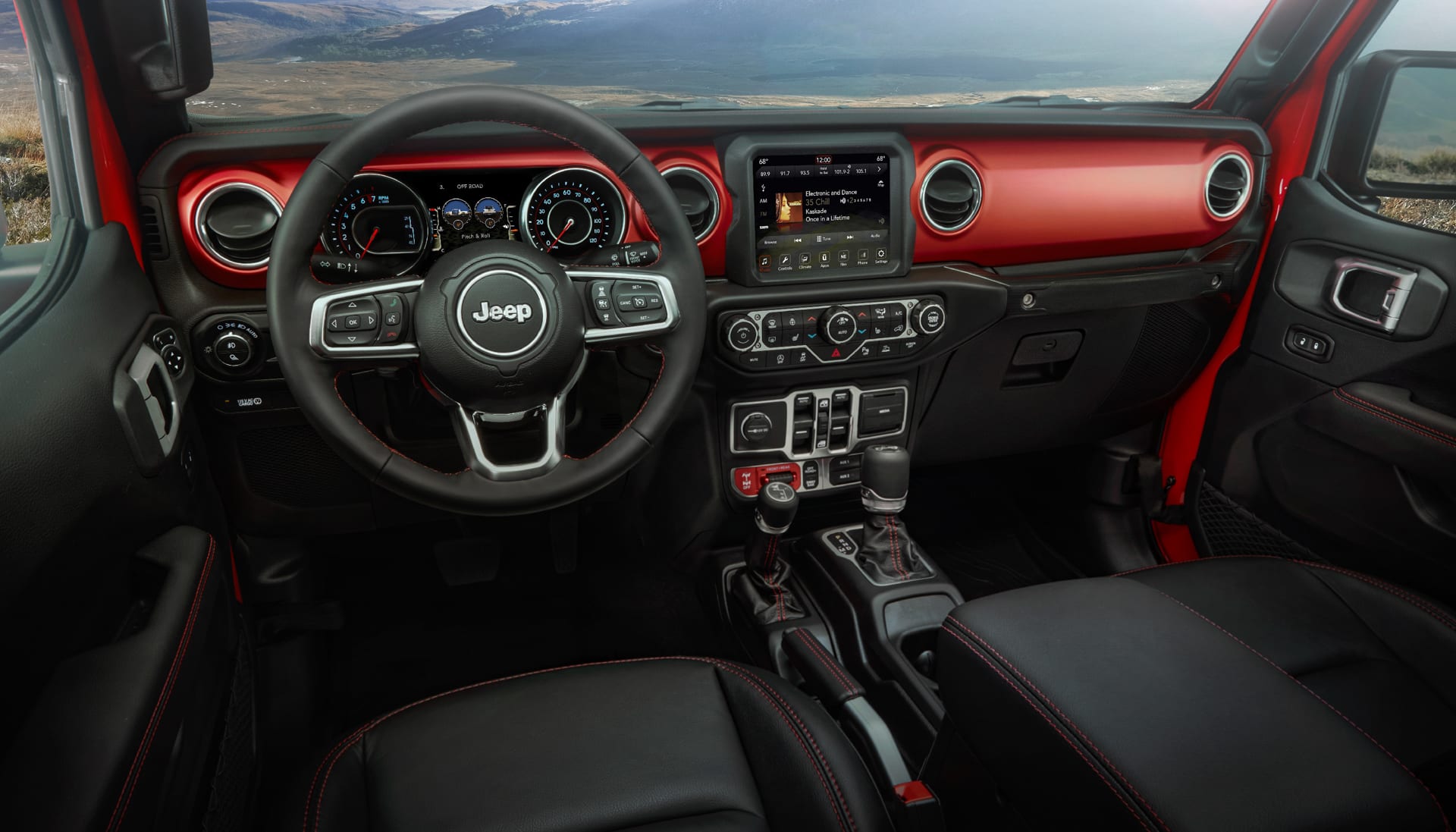 In fact, the Gladiator's $33,545 starting price can quickly skyrocket. It comes standard with a manual transmission. That's cool for folks like me, but most people want an automatic, and that'll cost you an additional $2,000. The hardtop? That's another $1,200. As you move up the trim levels you start getting into luxury-SUV price ranges. You can spend up to $62,000 on a Jeep truck if you want.

Yet, according to a recent report, buyers don't seem to mind: The average Gladiator is selling for about $56,000. People apparently love adventure. Or at least the opportunity to partake if the chance arises.

What is consistent through all the trim levels is the engine. A 3.6-liter V6 powerplant that pushes out 285 horsepower and 260 pounds of torque. I was never wanting for power while on-road or off. It had enough torque to get up steep inclines on the dirt and up San Francisco's hills. Getting to speed from an onramp wasn't an issue, but it's also not built for speed. It's essentially a rectangle on wheels and should be driven accordingly.

The eight-speed transmission also performed admirably both on-road and off, and it was nice to see that Jeep has left the manual shifter in the vehicle for toggling between two- and four-wheel drive. Sure, it takes some getting used to, but there's a sense of accomplishment once you master it. But again, some people will find it off-putting when so many vehicles on the road either have a button to do this or if the car even does this automatically. 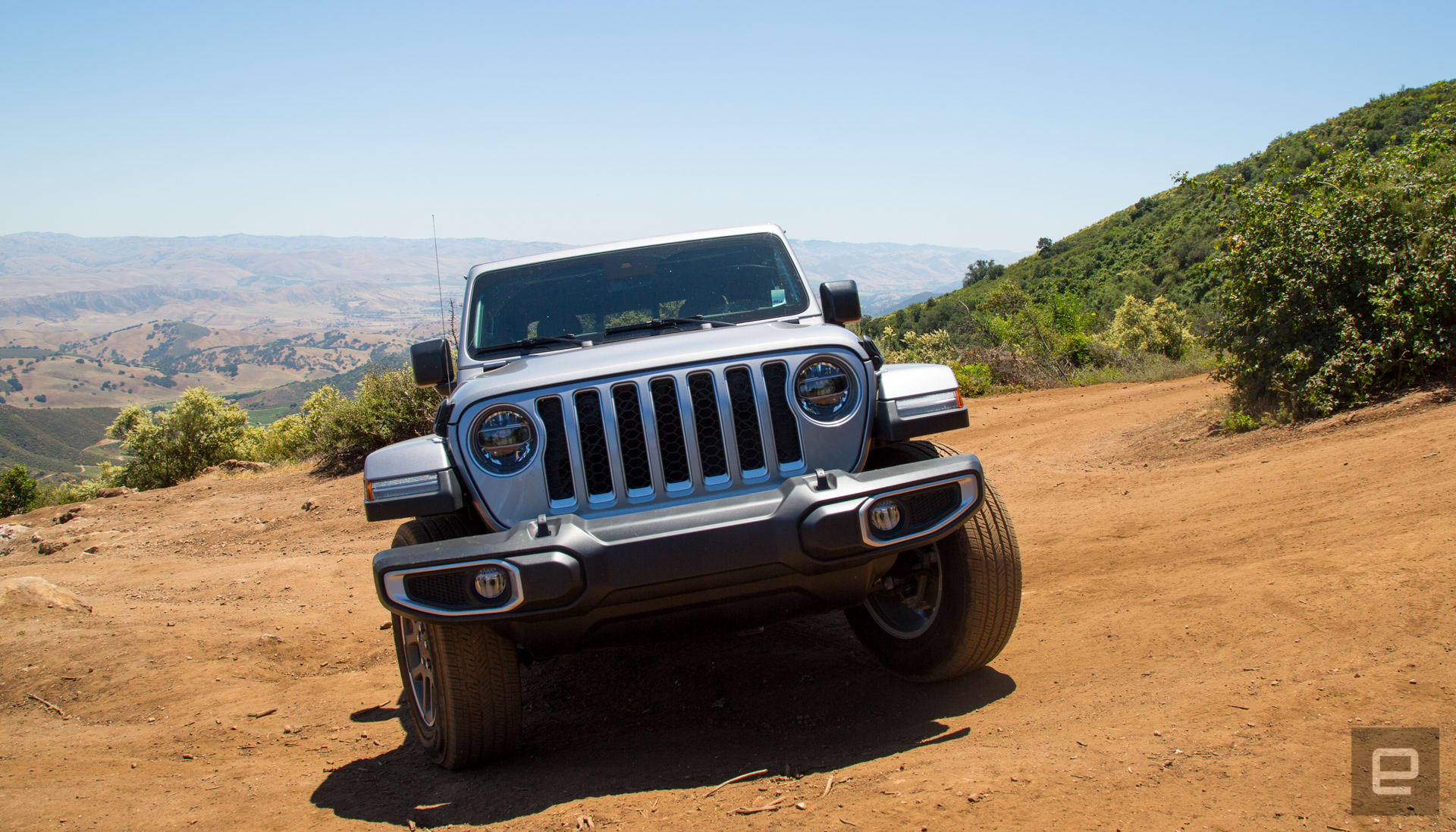 All of this give and take makes the Gladiator an odd beast: You'll either love its capacity for adventure or you'll be annoyed by its quirks. Plus, there's no way you're going to ever take off those doors. Updated tech might smooth out some of the ruggedness of the Gladiator, but again, it's still a Jeep. Which means the Gladiator will be an exciting, enjoyable vehicle for some shoppers (like myself). To others, it will seem like an overpriced beast with far too many features they'll never use. Adventure is great, but it doesn't always come cheap.