Boosted made its name by becoming the de facto electric skateboard. When rumors emerged that the company was working on a scooter, I had mixed feelings. I worried Boosted might bring out a me-too product and, well, scooters tend to be a little dorky. When the $1,599 Rev was finally revealed earlier this year, I was proved wrong (at least about the first part).

The Rev is clearly inspired by San Francisco, the city Boosted calls home. Most garden-variety scooters offer somewhere between 250 and 500 watts of power. At the high end, that's enough to get you up some pretty decent inclines, but you'll feel every slow, meandering yard. The Rev offers a whopping 1,500 watts.

As a reminder, the range and top speed of the Rev are good, but not radical. While 24 mph is quick, plenty of rival scooters can keep up. The 22-mile range is also generous, but not significantly better than cheaper options. It's how you'll get to that top speed that makes this thing so much fun.

The good news is that the claimed three-hour charging time means replenishing those watts will be fairly quick. (Some lower-powered scooters can take as long as five hours.) Even better, if you have a current-gen Boosted board, it uses the same charger.

There aren't many truly portable scooters. Yes, most ones you can buy (rather than rent) fold down to a manageable size, but "manageable" isn't the same as "convenient." The Rev tests the definition of manageable. At 44 inches long, it's comparable to a typical scooter, but at 46 pounds, it's almost double the weight of something like the Segway Ninebot series or Xiaomi Mi.

Can you lug the Rev up stairs? Yes. Will you want to? Not very often. But, if your commute is light on obstacles where lifting is required, you'll be fine. Either way, you'll soon forget about that once you're riding it (more on that in a moment). 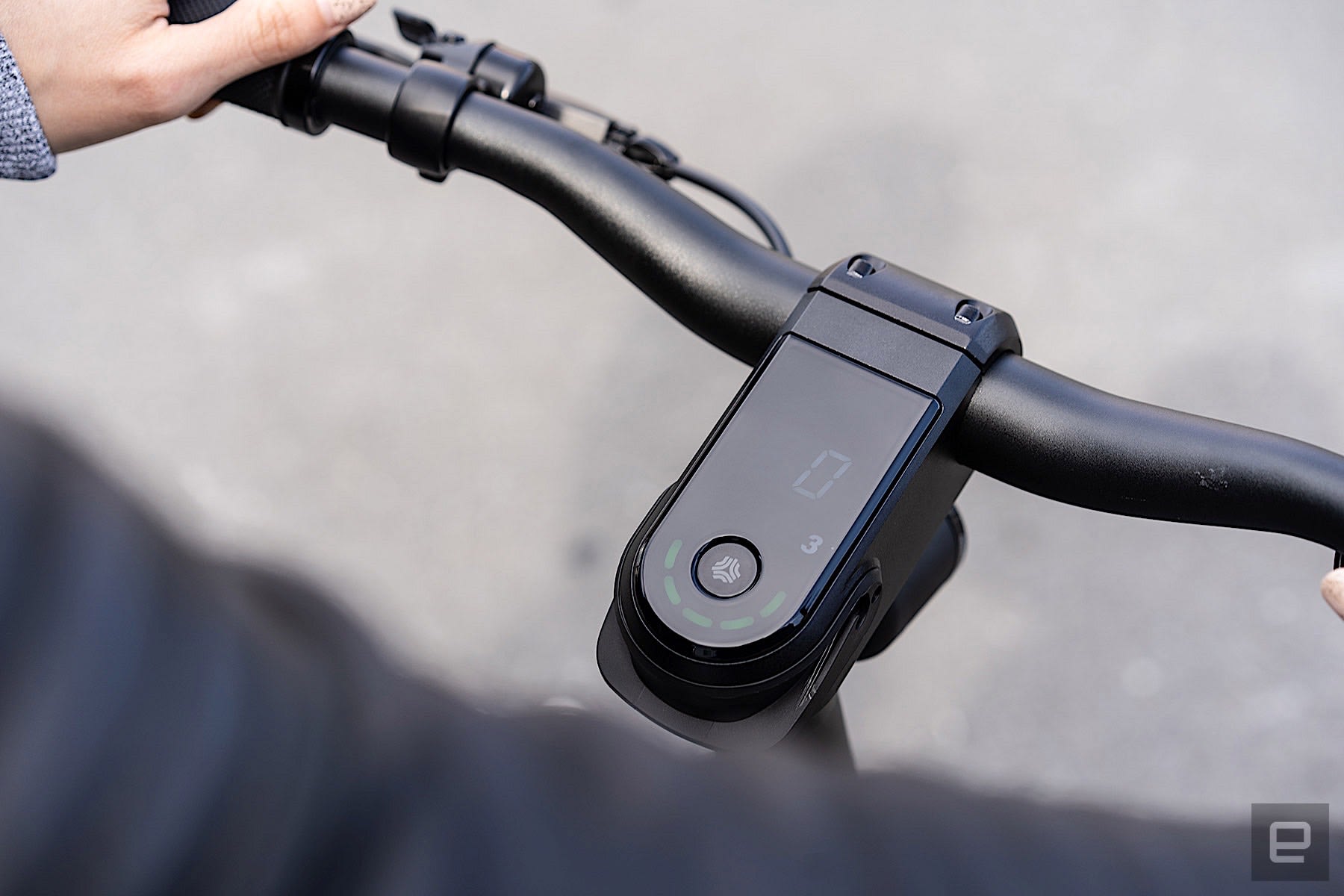 Not only is the body on the large side, but the wheels are also. Some scooters have puny little discs with solid rubber, but the Rev has chunky 9-inch air-filled tires. They're designed to take lumps and bumps in their stride, and they definitely do this. I've ridden on some pretty dilapidated roads here in Oakland and San Francisco, and on a scooter with smaller wheels, you feel every eye-rattling pothole. The Rev seems to glide over them so you never have to worry about being ejected from your ride.

In fact, the Rev rides so confidently that I soon started wondering how far I could push it. I took it for a spin at a large park on the edge of San Francisco Bay. Most of the pavement there is smooth or slightly rough -- no problem for the Rev either way. Once I adjusted to how fast this thing accelerates (hint: It's fast), I started to wonder if it might be able to tackle some light "off-roading." I'm talking trails through the grass with light dirt and pebbles -- not mountain-bike terrain.

The answer is: The Rev eats these up too. I'm pretty sure Boosted doesn't recommend it, but scaling the small hills via grassy trails carved by humans was a cinch. Likewise, a gentle dirt track posed no problem, even with a few twists and turns. The Rev just loves going forward.

It also loves going upward. Or, uphill, rather. This is where that 1,500 watts really comes into play. I already mentioned that, compared with more-pedestrian scooters, the Rev positively leaps up hills, but it bears repeating. Boosted officially lists the Rev as being capable of 25% inclines (for reference, the Xiaomi Mi is rated for 14%). So it's fair to say the Rev will tackle a lot more of San Francisco (and therefore most other cities) than many of its rivals.

For me, the real surprise was how little the acceleration seems to suffer, even uphill. From a cold start, half-way up a modest incline, I still felt like the Rev was pulling me up like a tractor. When I did the same thing with a 500-watt Uscooter, it got me to the top, but barely at walking speed.

We get it, it's powerful. But despite all that muscle, it's still elegant to ride. The materials and design feel high-end, and the folding mechanism makes a satisfying sound when you click it into place. The handlebars are comfortable to hold, too, while the minimalist speedo/display between them (and lonely power button) are as functional and discreet as you could want.

The accelerator might be a little different than what you've seen on other scooters. Instead of a paddle, the Rev has a knurled disc embedded on the right side. Rest your thumb against it and push forward to "go" and pull back to brake. It doesn't take long to get used to, though I initially felt like I preferred a handlebar brake. Which is good, because the Rev also has one of those -- it's a little "softer" than pulling back on the accelerator, but good for moments when you instinctively grip with your left hand. There's a third braking mechanism too: Place your foot on the rear fender to slow down more gently. If you can, get used to using the primary electric brake, as that's regenerative, so will help you eke out a little more battery life. 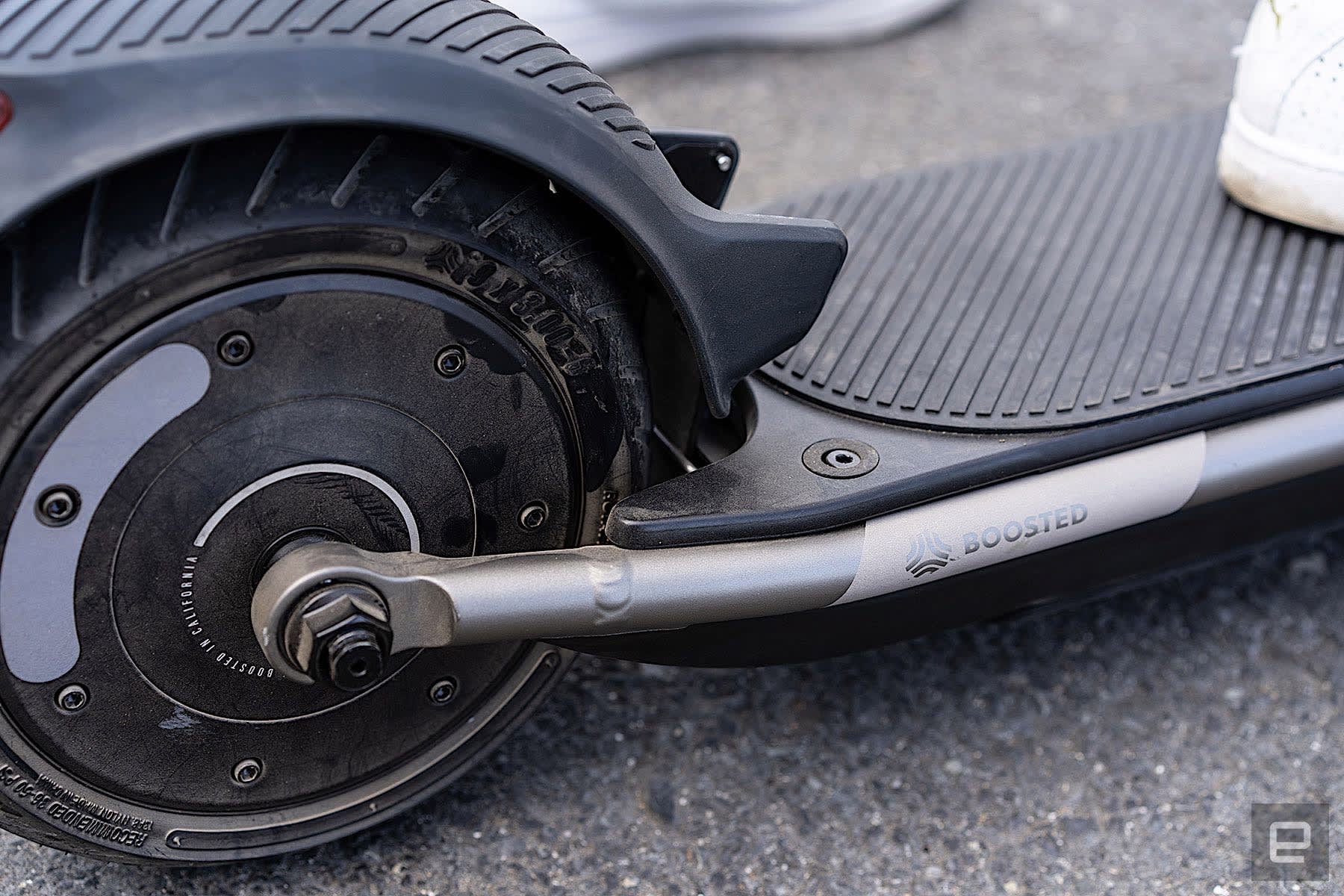 Another nice touch is the companion app. It's the same app that owners of Boosted boards will already know, but it's a simple way to see how much juice you have left or total distance covered without having to clutter up the onboard display.

All told, the Rev has three ride modes (slow, medium and fast, basically), which makes it easier to get used to the aggressive torque. Or good for limiting your speed if you want to preserve battery or ride more cautiously. Changing modes requires three quick presses on the power button (again, a move Boosted board owners will be familiar with).

One of the reasons scooters have become popular as a last-mile solution is their versatility. They can ride on the road as easily as the sidewalk, where permitted. With the Rev, I'd actually say it's really meant only for the road. Its extra heft and power (and lights) make it comfortable around traffic, but likely a pest to pedestrians. That's no doubt what Boosted had in mind anyway, but it bears noting.

The flip side of this is, if you're hoping for a scooter that's as good for riding to the store as it is the commute home, you'll really need to factor in the Rev's weight and size. I wouldn't want to haul this around Walmart, or leave it outside, although you might feel less bothered by it than I do. It's also not the most convenient thing to store in an apartment (I don't have a lot of space), but again, this might be less of a concern for you. But leaving it by the doorway is going to be a challenge no matter what space you have. Lugging it to a more convenient storage space might get old fast.

But then Boosted describes the Rev as "vehicle grade." Seen through this lens, it makes more sense. If you were eyeing up a gas-powered scooter (the motorbike variety), the Rev suddenly seems light, affordable and much more convenient. The Rev will tackle most commutes that you might do on a sit-down scooter, with all the above perks. It's only when you compare it to a smaller, more affordable electric scooter that the limitations become apparent.

Either way, wherever you go with this thing, you'll really enjoy the journey. It's loads of fun, and likely a great solution for many. But it's also a little excessive in everything from price to weight to portability. Which would be a shame for those who merely wanted a more lightweight solution from a brand they already love.