Petcube's Bites 2 and Play 2 are smart speakers in disguise

Unsurprisingly, most smart-home gadgets are fairly human-centric. But what about all the furbags that live with us? Don't they deserve a little slice of the connected dream? Petcube certainly thinks so. The company has two pet-camera products, the Bites and the Play. The former lets you sling treats at your cat or dog, while the latter has a laser allowing you to "play" with them remotely. Both models have just been refreshed, with a few interesting upgrades: a wider camera view (180 degrees, up from 138) and Alexa baked in. They're available starting today.

Of the main upgrades, the new, wider camera view is probably the most useful. As cute as the pet-friendly features are, ultimately the Petcube is for humans too -- it doubles as a home-security camera. And while you can "call" in and speak to your moggy, you can speak with your family members too -- and are more likely to get a response. Being able to see more simply makes the Petcube more useful as a home camera.

Right now, the difference in field of view isn't enormous, as it's limited to 160 degrees. I'm told an update will come later in the year to unlock the full 180 degrees, at which point you'll be able to "look" up/down and left/right a bit more. Even as is, it allows me to see more of my living room, which is enough for me to know whether my cat is sleeping in one of the corners that I couldn't see before. The camera itself is also better quality: It's still 1080p as before, but there's clearly been a general image upgrade, too. It's still not going to give your phone a run for its money (unless your phone is 5 years old), but it's a definite improvement over the original Petcubes. 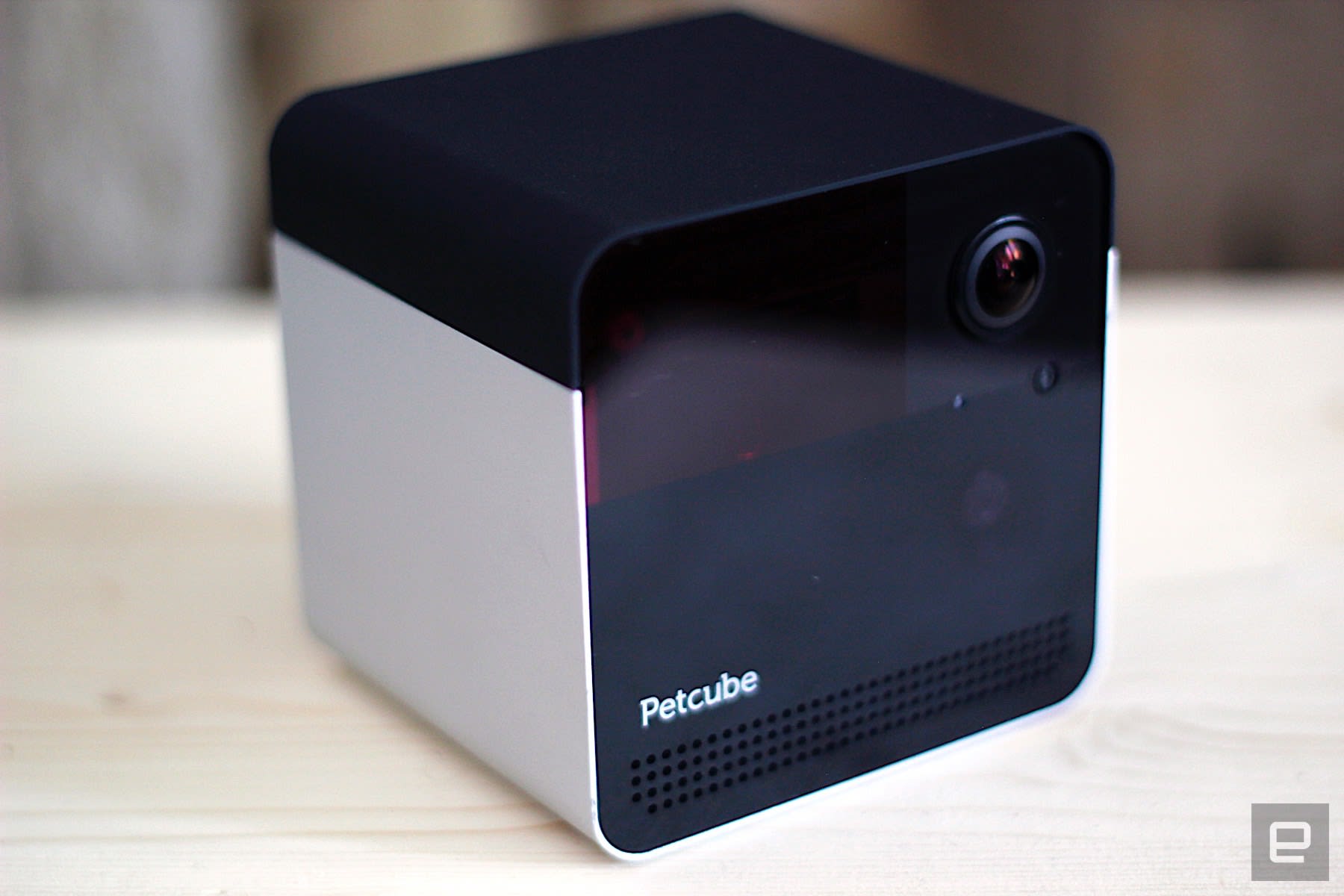 The addition of Alexa, on the other hand, is more interesting. Again, for us humans, it adds quite a bit more functionality -- making either of the new Petcubes a basic smart speaker. Yes, you can play music through these things, but you probably don't want to (they're not designed for that; the speakers aren't high fidelity). For non-music tasks, though, they'll do most things that an Echo would, like turn smart lights on and off, tell you the weather and so on. To bolster the Alexa functionality, these new models also include more microphones, so they can hear you from farther away or over background noise. There's also now support for 5GHz WiFi.

There is, of course, a Petcube-specific Alexa skill, which you can use to make your device sling treats or tease your cat with a laser. It's nice that you can do this without having to fire up the app, as that can take a little time to connect to the camera, by which point the moment (or your pet) might have passed. You can, of course, do this remotely via the Alexa app, too, but there's not much point in that when you can just as easily do it via the Petcube app (and see the video feed at the same time).

I've had the original Petcube Bites for a while. And, as much as I like it, Naoko (my cat) isn't so sure. For the most part, she's happy to ignore it. But when it throws treats, the internal mechanism makes a whirring noise that startles her. That surprise is then followed by some kibble being unceremoniously launched in her direction, causing her to scarper (though she'd soon come back to retrieve the bounty). Likewise, if you use the "voice call" feature, she gets confused; being able to hear her owners, but not see them, clearly blows her tiny feline mind. 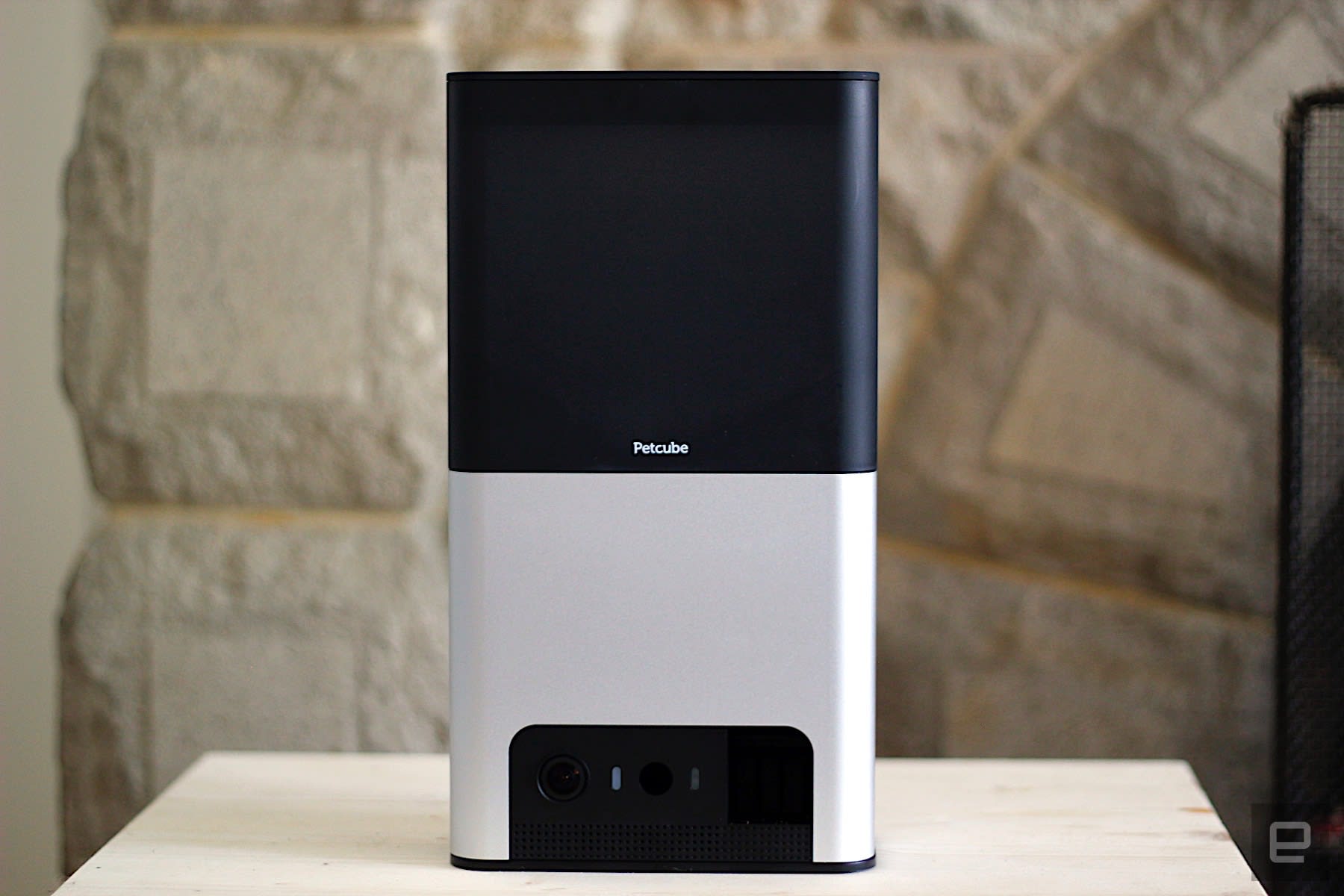 The Bites 2 ($249) has a new mechanism and makes much less noise. It also throws the treats a little more elegantly. The original basically spat them out, often launching a few. The new version gently tosses one at a time. The unit is also a lot smaller than its predecessor. The original was about the size of an Xbox One, whereas the Bites 2 a few inches shorter and narrower -- like someone zapped the original with a shrink-ray. It feels better suited for the modern home.

I have to say, though, that the Play 2 ($199) is much more Naoko's speed. No whirring noises, and she's one of those cats that are very responsive to lasers (and reflections from your watch, or any other moving light). The Play 2 remains about the same size as the version it replaces (roughly 3 x 3 inches) but has a sharper, more modern design. It also has an improved laser pointer for more fluid interactions.

I actually feel a bit bad playing with my cat and the laser (not just Petcube's -- any laser pen). The moment she sees it, she's obsessed and dashes around at full speed trying to catch it. Of course, she never can, and it bothers me that it's bothering her. But at the same time, as far as I can tell, she loves the chase and I feel good that she's being active, as she's otherwise pretty darn lazy. Given that I leave dry food out for her every day, the Play 2 makes much more sense for us.

All in all, the updates here are a good balance of useful and playful. It's good to see the Petcube line grow beyond a simple camera that interacts with your pets. And that the camera itself is higher quality and able to see more. The addition of Alexa might feel a little gimmicky at first, but it does bring an extra dash of "smart" to your smart home, and possibly serves as a good introduction to Alexa if you don't already own an Echo. If you do have an Echo, it could still bring the Assistant to a new room in your house. The pets end up everywhere, after all.