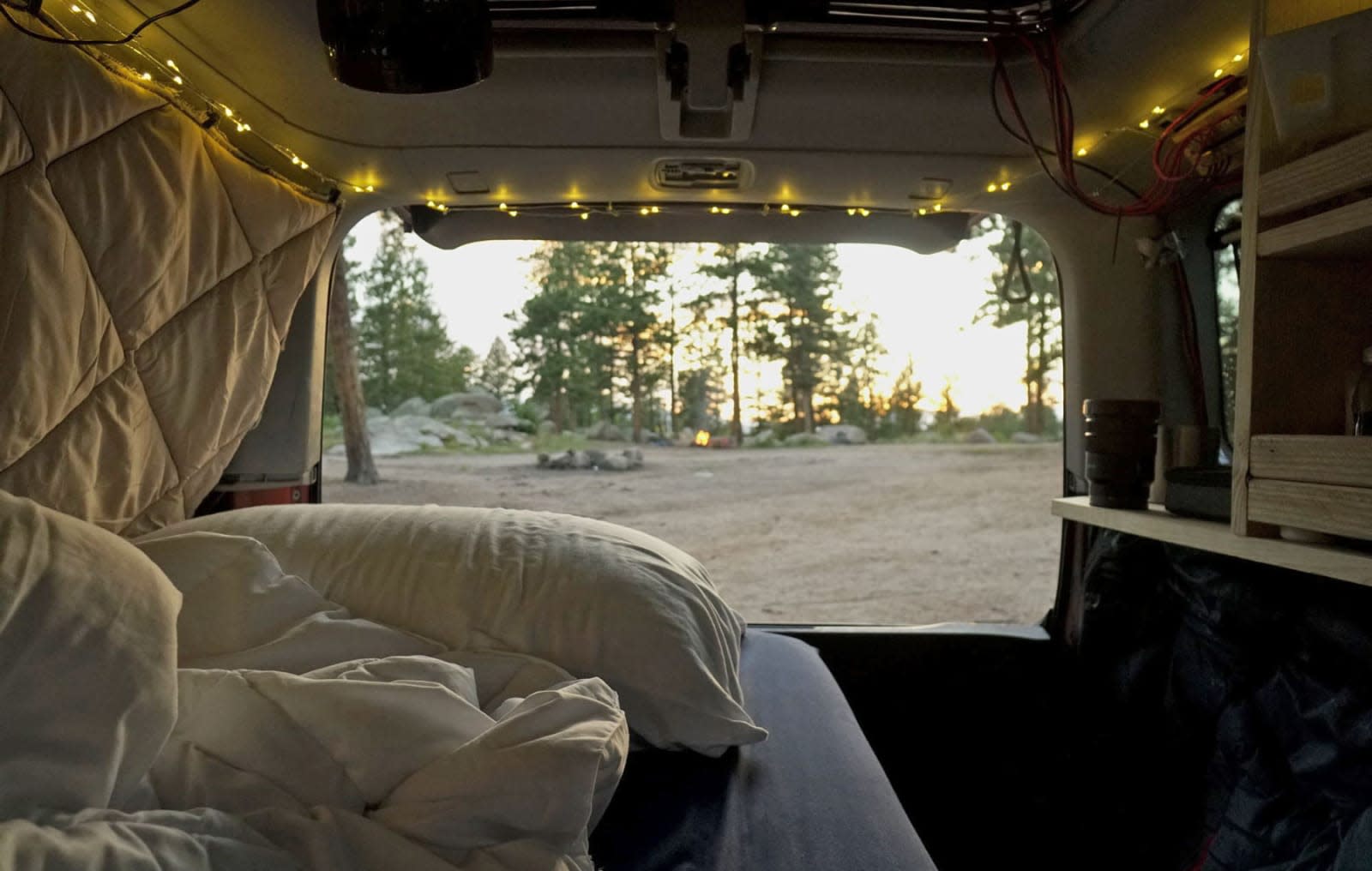 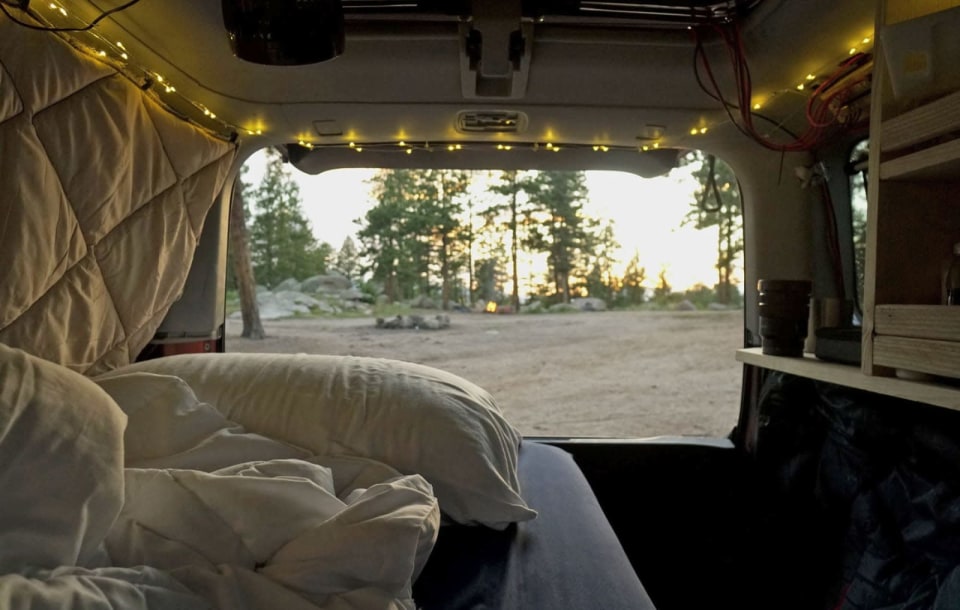 Earlier this year I was infected with the #vanlife bug. Well, more like the #overlanding bug in my case, but I've been camping and working from the road for over a month now. I get to soak up this country's natural splendor and scurry after Slack notifications.

But be warned, would-be digital nomads, this is no walk in the (national) park. I need a lot of gear, like solar panels, batteries, a refrigerator, cell boosters and tons more to make it happen. Here's what I took on the road for my first month (and why). 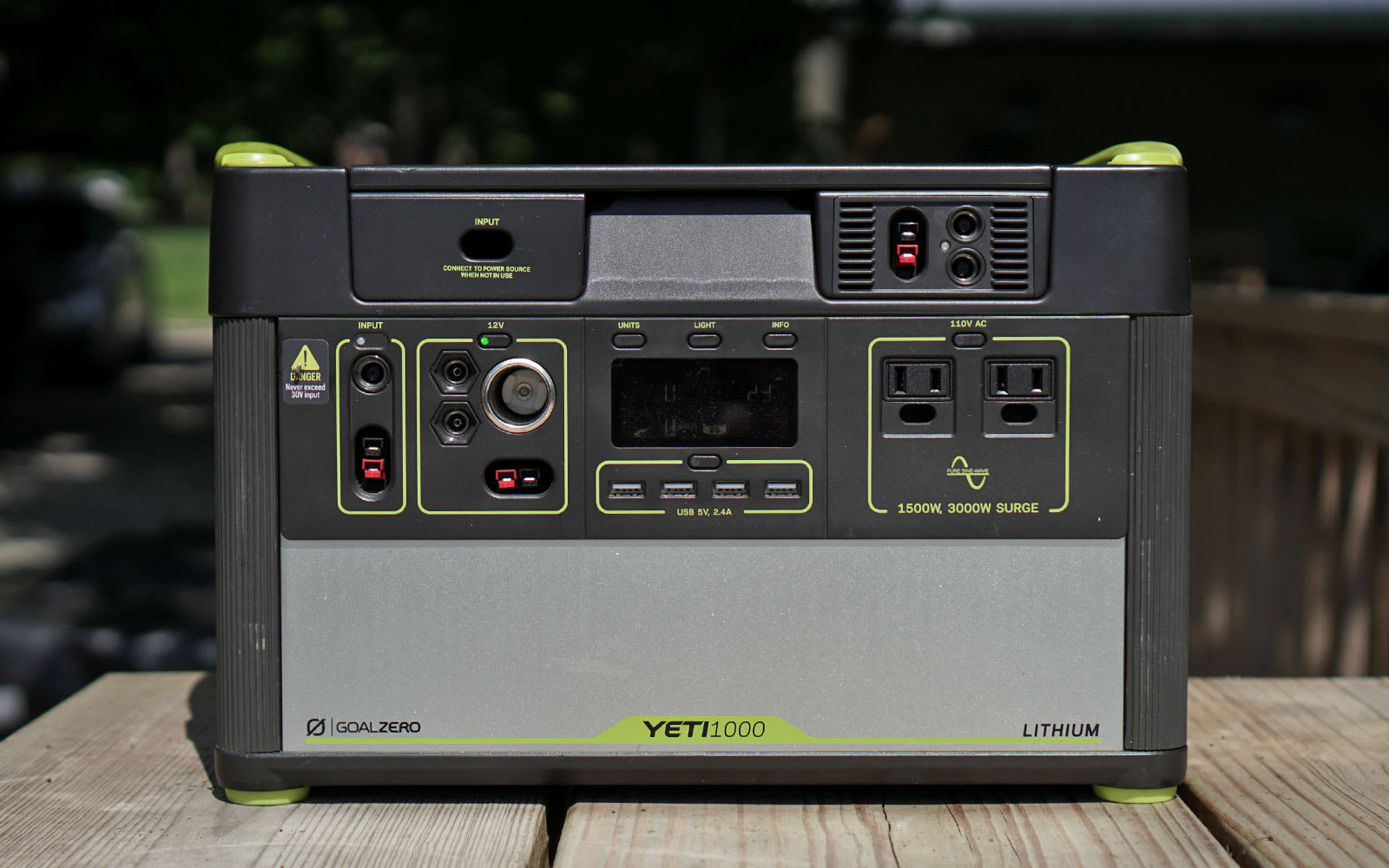 When you're on the road for weeks at a time, you need to store a lot of power. My MacBook Pro charger needs 100 watts of electricity per hour, so the Goal Zero Yeti Lithium 1000 was an ideal size, providing around 10 hours of consistent charging.

But the laptop isn't the only thing that needs power. Consider the rest of the gear on this list: the fridge, the booster, the GoSun oven. That's a lot of juice. So I needed a battery that could handle bringing in a lot of power while simultaneously putting out just as much, if not more.

That's ultimately why I decided on the Goal Zero. The charging circuitry can handle the 220 watts I have coming in from the solar panels (see below) while sending out 100-150 watts without breaking a sweat. The EcoFlow River ($539) can only handle 110 watts coming in, and the Anker Powerhouse ($500) can handle even less at around 100 watts of input.

There's one other perk to the Goal Zero battery: expandability. The company recently released its Yeti Tank ($399.95) system, and each tank adds 1,200 watt-hours of capacity. But surely there is a downside? Yup, it's the price. The Goal Zero Yeti Lithium 1000 is $1,099 just to start, and the aforementioned tank accessory adds another $399. That may be a big outlay, but if you want to work on the road in, say, states that don't have desert-tier levels of sunshine, it's a must-have. 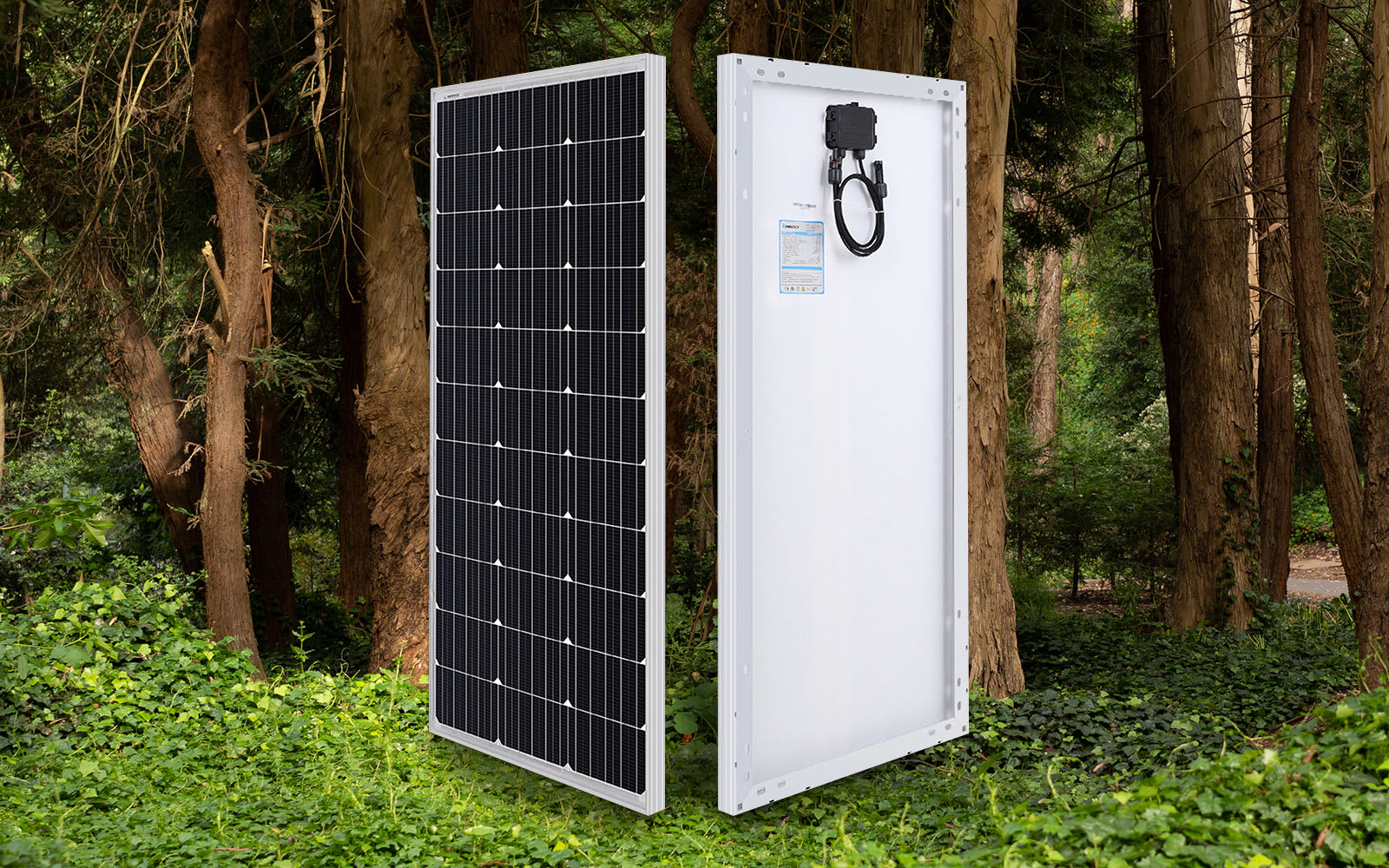 I considered all kinds of solar panels when I was building out my car, and I'm glad I decided on Renogy's 100-watt option. A lot of people with full-sized vans use flexible solar panels (160-watt, $255) glued to the roof, but I was spooked by all the reports of them cracking from the wind. Renogy's panels are real outdoor panels that you might use on the roof of a house or with a ground mount, and I've found them to be extremely reliable even after bouts of pouring rain and high-speed winds.

Right now I have three of them: two mounted on the roof and one that I scoot around as the sun moves from east to west. The most power I've gotten out of these panels on a blistering day in the Nevada desert was around 250 watts, though 220 at noon is more common. Unfortunately on cloudy days, like the many that I experienced in Colorado, three panels weren't enough. I considered myself lucky to get 50 watts per hour on many of my days at Grand Lake. After a while, my Goal Zero got down so low that I couldn't charge my laptop, so I had to leave.

Pro-tip: If you're working on the road with a thirsty 15-inch laptop, you're probably going to need more than three panels on cloudy days. 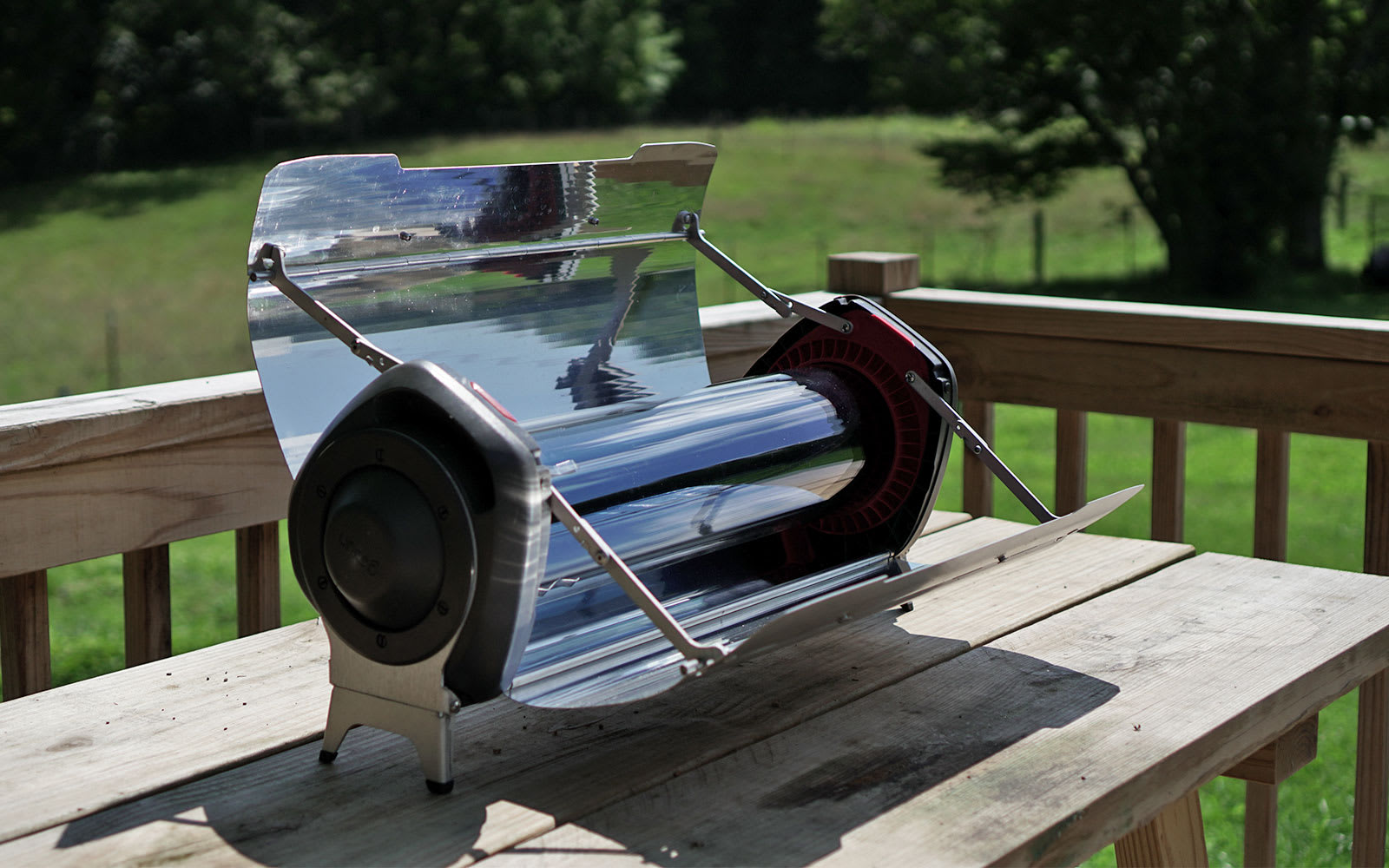 Camp cooking is pretty much dominated by butane and propane stoves, and they're great. (I have one with me.) But surely there's a way to cook that doesn't require chemical fuel? In fact, there is: GoSun has been making solar ovens for several years now, but its new GoSun Fusion can also tap into battery power in the evening with its built-in heating element.

I tried both solar and electric cooking, and the first thing to know is that cooking in either mode is more like braising than using a traditional oven. Moisture and heat get trapped in the glass vacuum tube, making it great for stews and even baking. It's not like cooking with a pan on a propane stove, that's for sure. Think slow-cooker.

More important to me, though, was the efficiency of electric cooking. I was able to cook two servings of a chicken and vegetable dish using only 20 percent of my battery, which may sound like a lot but that's mind-blowingly efficient when compared to a 1,000-watt hot plate or microwave. The only downside? Electric cooking took about two hours. 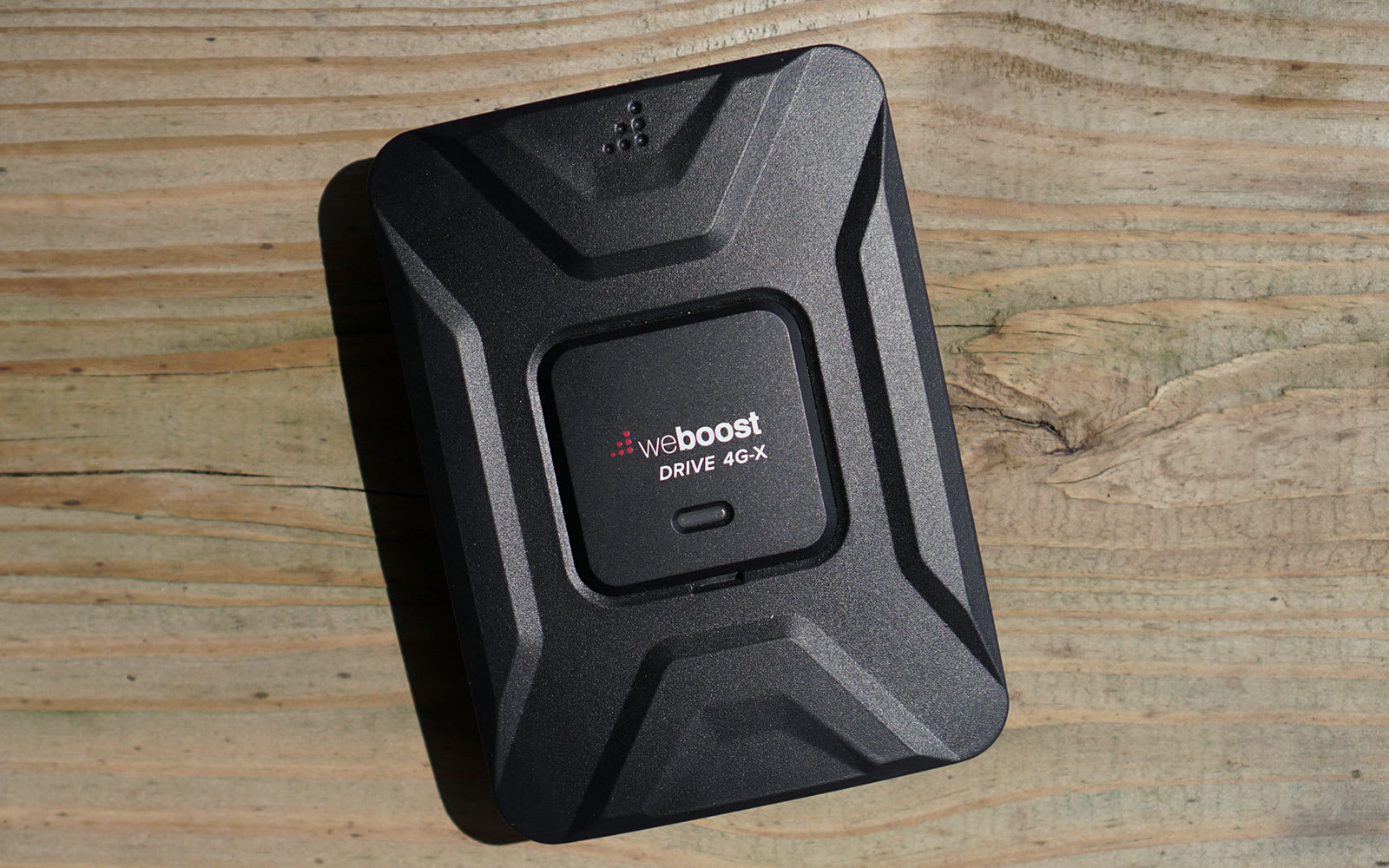 National parks and wildlife areas are breathtaking, but they're not renowned for having great cell coverage. Mercifully, you can amplify your signal with a cell booster. There are two major competitors, weBoost and SureCall, and they both offer a range of solutions depending on your situation. For mobile (in-car) boosters, WeBoost has the Drive 4G-X ($450) and SureCall has the Fusion2Go 3.0 ($362).

In the end, I opted for the Drive 4G-X, mostly because weBoost has a whole ecosystem of products, like the OTR (which stands for "over the road") antenna that's currently lifted well above my car.

I'm happy to report that the booster does actually work. Once you switch it on you get about 20dBm of increased signal or roughly one or two bars. Without dragging us back into the iPhone 4 era discourse over what a bar actually is, two more of them is a lot. Will the WeBoost increase your overall speed? Not really, maybe a little bit in the right circumstances. It's more about range and stability. I've noticed that the weBoost is helpful in maintaining a strong, consistent signal, which is crucial for video calls.

Admittedly $450 is a lot of money. I got mine on eBay used for just over $260, so set up that saved search and keep your eyes peeled. One other thing I've noticed about the WeBoost: This thing gets shockingly hot, but apparently that's not a problem. My 4G-X kept on boosting even in the 103-degree desert heat, in fact. 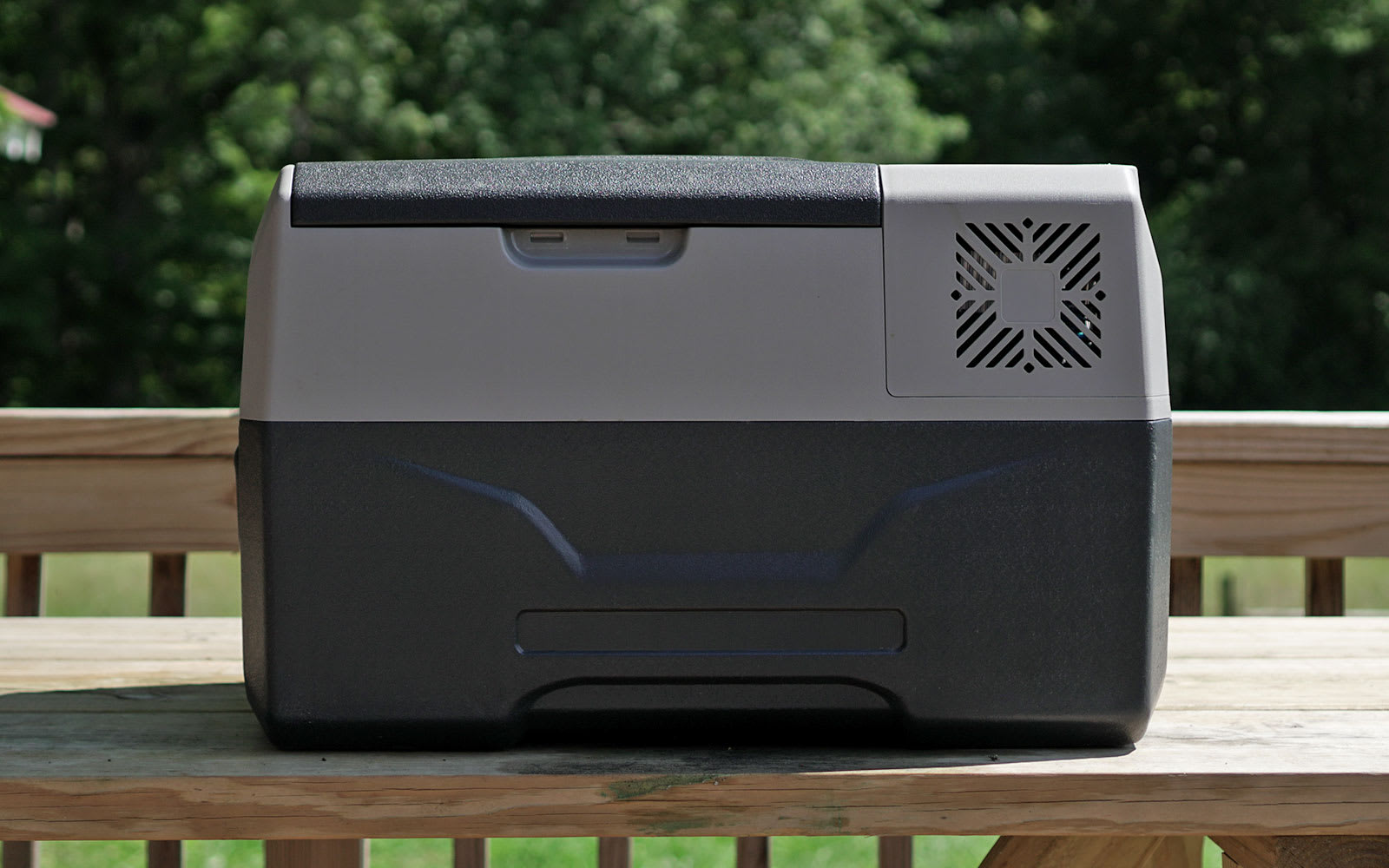 You might be surprised to learn portable refrigerators are actually very expensive. I certainly was. For keeping food cool in your car you essentially have three options: regular old insulated coolers, thermoelectric coolers, and portable fridges with compressors.

You can get high-quality coolers like the Yeti Roadie 20 ($200) that don't use electricity and will keep food and drinks very cold with a bag of ice, and for people going on weekend trips, I think this is really the way to go. Thermoelectric coolers such as Igloo's thermoelectric models (40QT, $163) are the midway point, price wise, between standard coolers and compressor fridges at $100-300, but I would personally avoid these. They need a lot of electricity and can only really keep food and drinks about 40 degrees cooler than the ambient temperature.

According to Reddit and the mountain of YouTube videos I watched, Dometic and ARB make the best compressor fridges. Unfortunately, I couldn't afford them, as Dometic's 28-liter fridge normally costs $830 and ARB's is over $900.

Luckily a company named Alpicool makes a similar fridge with a compressor. I went with the 30-liter CX30 ($279), and at a third of the price of the competition, I bet you're wondering how well it works? Well, great news: It actually did fantastically in my testing. I was able to keep food under 40 degrees even in the 103-degree Nevada desert heat (though at a higher power draw). Not bad! And it was able to do that for a week at a time.

It's tempting to go with as big a fridge as you can afford, but if I could do it again, I would have gone with the 20-liter model ($239) as a solo adventurer. I had a six pack of beer, a small bottle of vodka (for camp cocktails, obviously), two pounds of lunch meat, many hot dogs, three apples and even a dozen eggs in there at one point, and I could probably fit more. 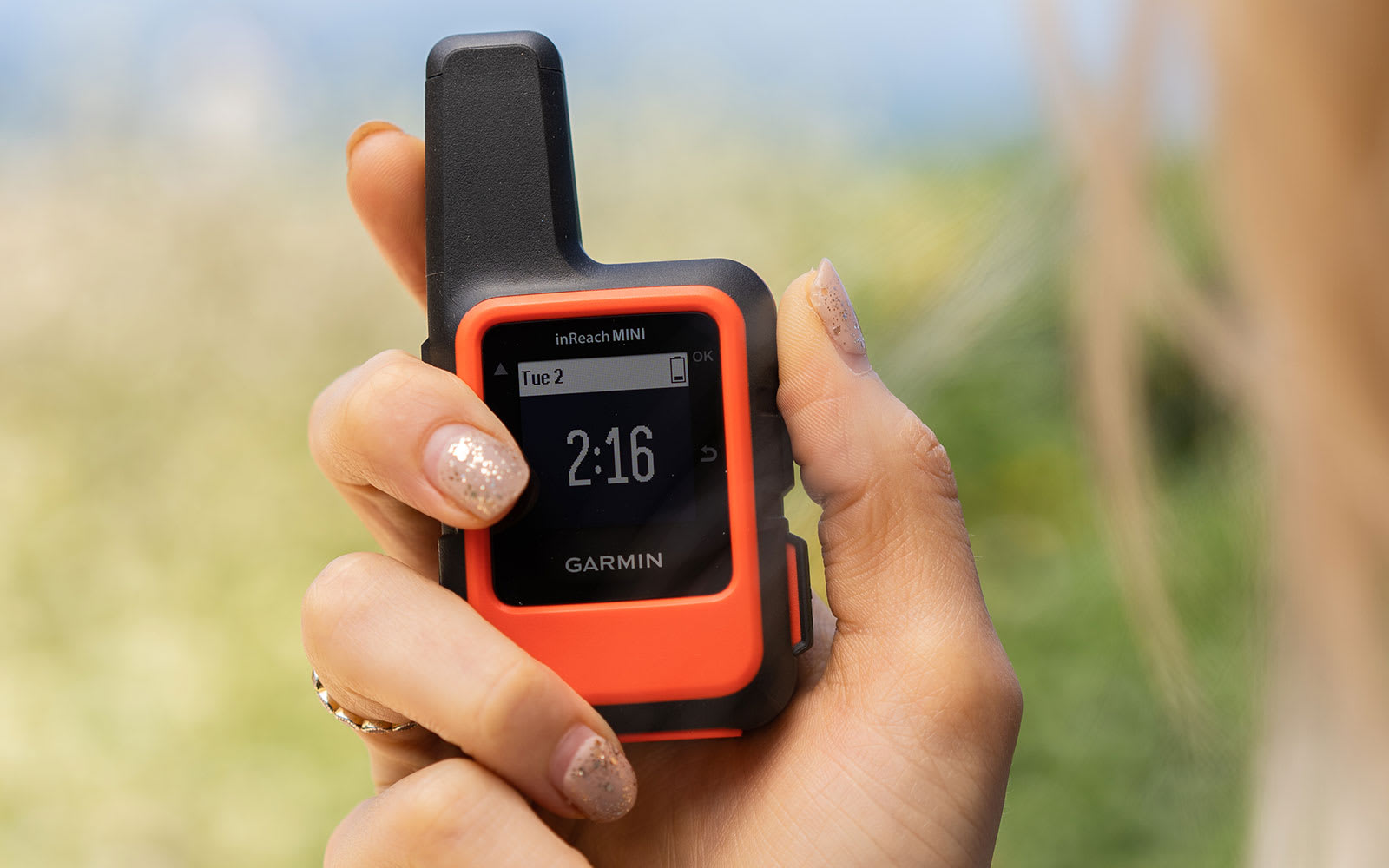 I wanted to try the Garmin InReach Mini on this trip because there have been a number of times where I've been completely out of range of cell signal on forest access roads and it would be nice to be able to get help if the car got stuck. But it was clear almost immediately that these satellite communicators are overkill for my purposes, and they're obviously geared toward a totally different set of outdoors people.

In my naivete, I assumed that the InReach Mini's SOS function worked sort of like a smartphone, where the SOS button is essentially a shortcut to message your emergency contacts. Instead, Garmin partners with a service called GEOS where a human serves as a go-between that contacts the right rescue team depending on where you are and what you're doing. This sounds fantastic for an Antarctic expedition, but it's a bit much for getting stuck in the mud coming out of Rocky Mountain National Forest.

Of course, you can still use satellite texting to get yourself out of a pinch, but that's where the experience of using the InReach Mini started to crack for me. Because of its diminutive size, the Mini almost requires a smartphone to operate. You can type out messages on the Mini, but with just three buttons to work with you certainly wouldn't want to, so the alternative is to connect to it over Bluetooth and use Garmin's Earthmate app.

The app (at least on Android) is bad but not terrible; the real sticking point was the speed. Everything that involves hitting the satellites takes several minutes, which in and of itself isn't a bad thing. However, if you have your phone in your pocket and you venture out of the Mini's Bluetooth range during that lengthy transmission time, things get a little glitchy.

Again, this device clearly isn't positioned at me, but I feel like it could be if the system weren't so finicky. I was hopeful that Garmin's Explore program for Windows might let me type things out old school on my laptop, but it's only for firmware updates. At $340 plus the pricey satellite subscription, the InReach Mini is definitely for someone cooler and wealthier than I am, but it is an option for safety-minded people who don't mind waiting a bit.

Extended overlanding, car camping, boondocking, or vanlifing? Whatever you want to call it, it has been an enriching experience because it's forced me to really understand the amount of infrastructure that I need to get by in the modern world. I get a huge kick out of the notion that I collect all the power I need for a day with my solar panels, or that I can drink water right out of the Colorado River using high-tech filters like the Sawyer Micro ($27.95), or that I can connect with anyone as long as I have a clear view of the sky.

But a lot of times things go wrong. At Stillwater Pass in Colorado I had so many cloudy days that I could only barely scrape together enough electricity to get my work done, so I'm adding 200 watts of solar panels. Sometimes the LTE where I'm at isn't quite stable enough, even with the booster, so I'm switching from an omnidirectional antenna to a high-powered directional one.

Every day is a new chapter in my self-imposed conflict between man and nature, and honestly, the gear I have with me puts me in the winner's camp on most days, but not every day. And that's what makes it fun.

If you've got any camping gadgets to recommend or that you'd like us to test, leave a comment below. Or you can send me a suggestion on Twitter. Happy trails! 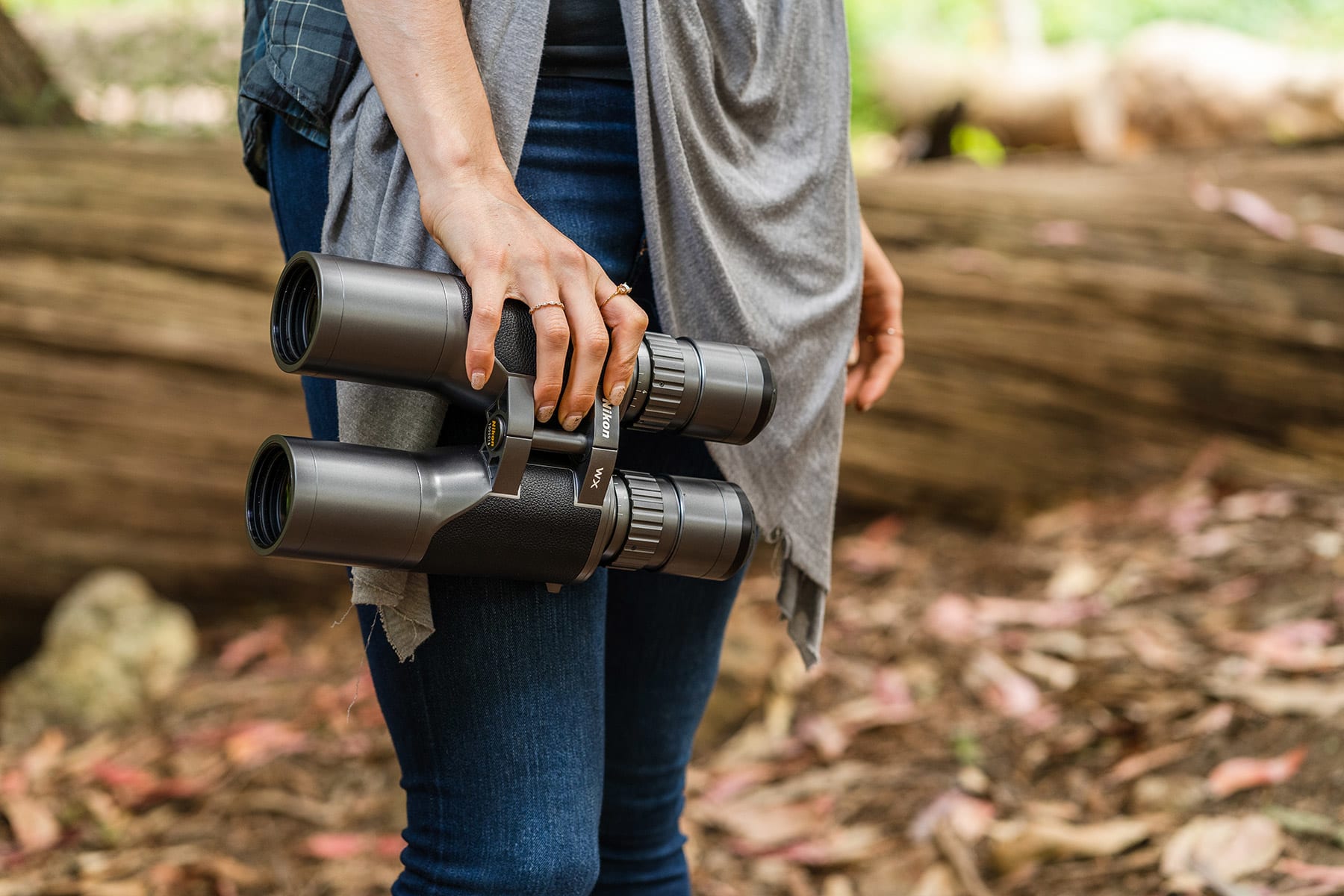 In this article: 4G-X, alpicool, boondocking, car camping, CX30, engadgetoutdoors2019, gadgetry, gadgets, garmin, gear, goal zero, gosun, gosun fusion, inreach, overlanding, thebuyersguide, vanlife, weboost, vanlyfe
All products recommended by Engadget are selected by our editorial team, independent of our parent company. Some of our stories include affiliate links. If you buy something through one of these links, we may earn an affiliate commission.