They have a cushioning system designed to adapt to individual foot strikes.
E. Alvarez|07.25.19
@abcdedgar

Nike has developed a new shoe technology for both casual and every-day runners. Today, the sportswear giant is taking the wraps off of Joyride, a responsive cushioning system designed to adapt to individual foot strikes and offer high levels of impact absorption as your feet hit whatever surface you're running on. Nike says the idea with Joyride is to "make running easy" and give you more personalized comfort, which is made possible by thousands of tiny, energy-packed beads that form the shoe's midsole. You can get a great look at them in the Joyride Run Flyknit pictured above, the first Nike sneakers to feature the visible and colorful beads.

The company told Engadget its Joyride tech has been in the works for around 10 years, and it believes that with it runners will have the "most cushioned ride we've ever been able to deliver." That's saying a lot for Nike, which already has some of the best running shoes out there, including the ZoomX Vaporfly, Pegasus Turbo and Epic React. With the Joyride Run Flyknit, Nike says its hope is to appeal to elite runners as well as people who may just be starting off. As such, durability was also a key focus during the development of the sneaker, and Nike says a cushioning system with over 450 miles showed "no concerns" in the wear-and-tear department. 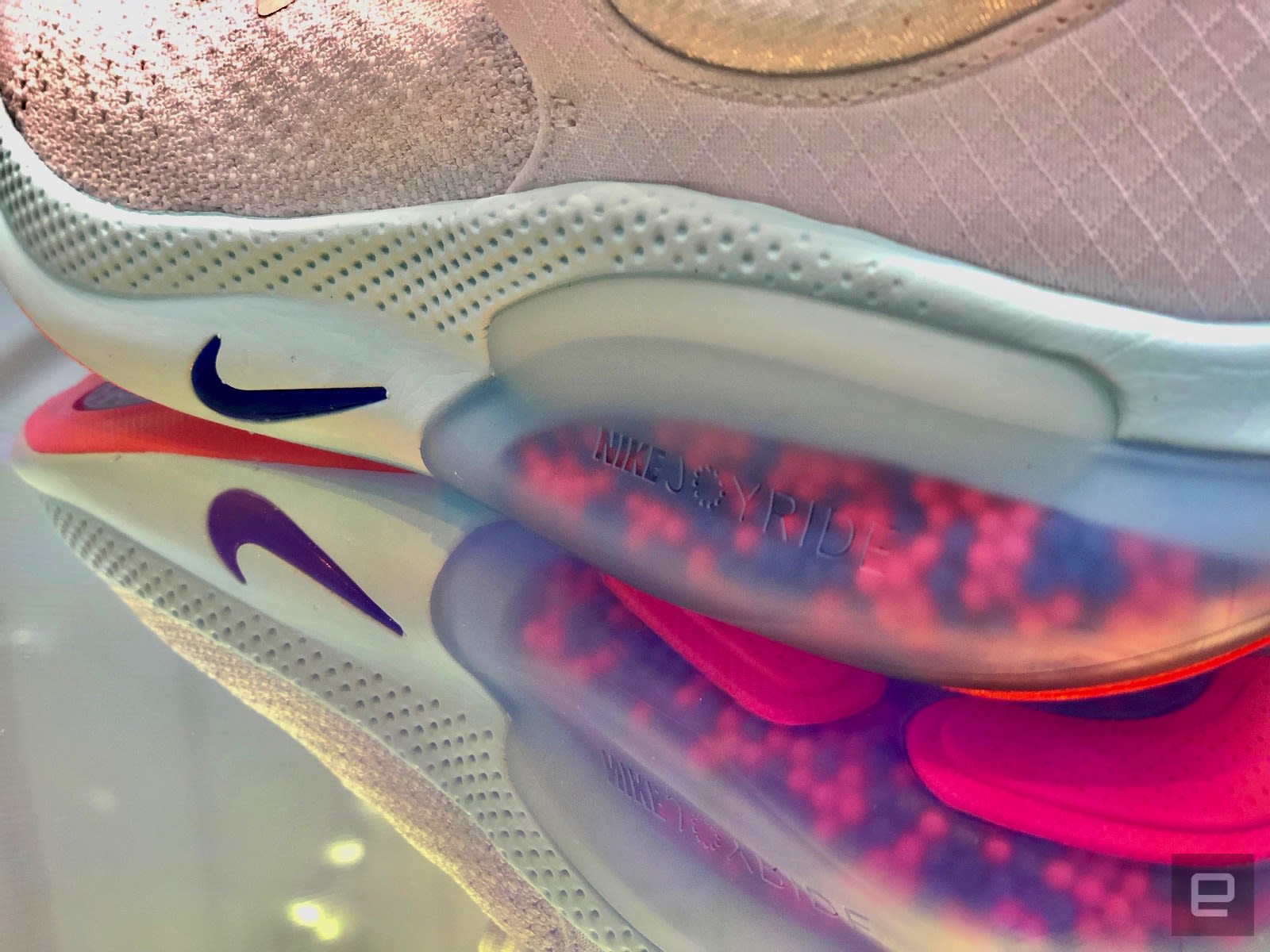 Adidas, Nike's main competitor, does have the Ultraboost for its part -- which I often describe as feeling as if you're walking on a soft, cushiony pillow. With the Joyride Run Flyknit, Nike has created something similar, if not better. And since these shoes don't include a sock-liner, you feel the thousands of tiny beads conform to your feet as soon as you put them on, since there's only a thin piece of fabric between them and each foot. That should help maximize performance, Nike says, since Joyride has the ability to adapt to every runner differently.

The technology, which is similar to Puma's NRGY beads from 2017, does bring up a major concern. And that's the fact it can contribute to more plastic pollution in the world. "Nike is committed to creating a more sustainable future and protecting the future of sport," a company spokesperson told Engadget. "Like all athletic footwear, Joyride can be recycled through Nike's Reuse-A-Shoe program and transformed into new products." Still, what could've made Joyride better was if the beads featured biodegradable materials, or anything else that would be more sustainable than plastic.

Nike's Joyride Run Flyknit will launch globally on August 15th for $180, although Nike Plus members have the chance to scoop them up earlier, on July 25th. That said, these won't be the only sneakers to don the Joyride technology: Nike is also working on women- and kid-specific models that are going to have the bead-filled cushioning system, some of which you can get a sneak peek of in the photo gallery below. Those other models are set to drop later this year.

Update (7/26/19, 3:50PM ET): This post was updated with a statement from Nike about the use of plastic beads in Joyride.