Samsung is one of the few remaining companies to still be making higher-end Android tablets, so it's nice to see the company show up with a new one this year. The newly-announced Galaxy Tab S6 follows up last year's Tab S4. Like its predecessor, the Tab S6 is a 2-in-1, designed for those who need to get work done on the go. To that end, Samsung focused on a few principles -- a portable, thin and light design, powerful guts and helpful multitasking software. After checking out some early models of the Tab S6, I must say, I'm pretty pleased with the changes Samsung has made since the S4.

Let's start with what Samsung gets right. The Tab S6, like its predecessor, has a thin and light design that manages to still feel premium. The tablet measures just 5.7mm deep, compared to the S4's already-slim 7.1mm and houses a 10.1-inch Super AMOLED display that looked bright and crisp during our hands-on. I also really liked the new color options -- rose blush and cloud blue -- that are attractive and eye-catching yet still look classy.

Where the company really needed to improve with the Tab S4 was its keyboard, which I complained about heavily in my review. Samsung must have noticed because it made a real effort to enhance the Tab S6's keyboard case, which you'll have to pay an extra $179 for.

The biggest change here is the addition of a trackpad. Hallelujah! No more prodding the screen to carefully select a cell on your spreadsheet. The touchpad makes the keyboard feel more like the laptop replacement Samsung wants you to think the Tab S6 is. Plus, it makes the experience more complete -- not having a trackpad on a keyboard cover is like sleeping in a bed without pillows. You can do it, but it just feels like something's missing.

During my hands-on, the trackpad was responsive and easy-to-use, despite being a tad small. I was relieved to see that two-finger scrolling and zooming gestures worked, too. Samsung also thankfully came to its senses and removed the redundant button next to the Tab S4's space bar that was dedicated to bringing up the software keyboard. In its place, we get an Fn hotkey to toggle a row of functions in the top row, including a shortcut to launch the DeX desktop mode over Android.

I've complained about DeX before -- it's not a very powerful replacement for a true desktop OS and often loads mobile versions of things like Google Docs. Plus, on our demo Tab S6, DeX mode took a few seconds to launch and a few additional seconds to return to regular Android. But at least it lets you run multiple windows side by side or on top of each other, just like you would on a laptop. It's no Chrome OS, but it's a good-enough stand-in if you're not too demanding.

The keyboard case also has a built-in kickstand that props up the tablet at a variety of angles and was easy to adjust. When you're not trying to type an email, you can detach the keyboard part of the case and leave the kickstand -- to relax into watching a YouTube video, for example.

On the whole, though, this case is slightly odd and bears explaining. It's made of two pieces -- the kickstand half and the keyboard half. The latter connects to the tablet via pogo pins. As for the other half of the case, the top third of it attaches magnetically, with a groove to accommodate the S Pen. Below that, two strips of very sticky foam run down the middle of the case to glue the cover onto the tablet. The adhesive is so strong that it took a great deal of strength and finesse to pry the cover off the tablet, so it's something you won't want to attach lightly.

Speaking of attachments, this year Samsung decided to stow the S Pen in a groove carved into the Tab S6's back. It latches on magnetically, and charges when it's in the cradle. You'll see a battery indicator when you've placed the stylus in the dock. 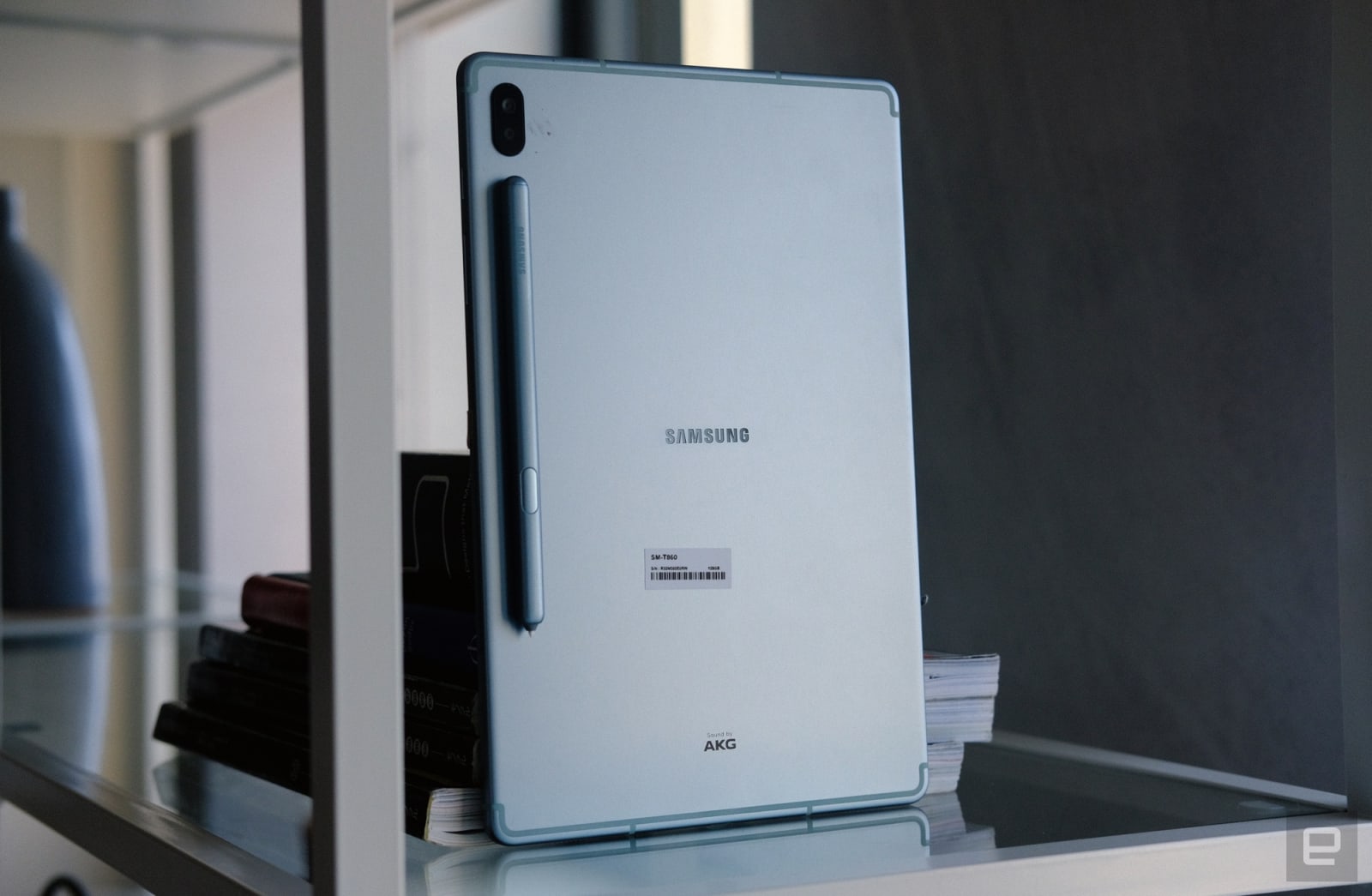 Like it did with the Galaxy Note 9, Samsung added Bluetooth capabilities to the S Pen here, turning the stylus into a remote control. But the company didn't stop at simply replicating the feature -- it added gestures to make it more useful. In addition to clicking and double-clicking the button to control stuff, you can also press and hold while flicking your wrist up, down, left or right to trigger more actions.

I tried holding down the button and flicking the S Pen upward with the camera app open on the tablet, and the device switched from the front to the back camera. Swinging from side to side switched between modes like Portrait, Pro and Auto. You can customize these gestures via the tablet's settings, though some, like pressing the button to snap a photo in any camera-based app, are universal. Pushing the button in a media player will pause your music or video, while the same action advances to the next slide in PowerPoint. Samsung is opening up this gesture part of its SDK to developers today so we might see more apps make use of this soon.

As impressed as I was by the new wand-like gestures (swish and flick, am I right, fellow Harry Potter fans?), I'm not yet sure how useful this feature will be in the real world. The S Pen itself continues to be an excellent tool for digital art, thanks to its sensitive and fine nib, as well as its comfortable, intuitive design. 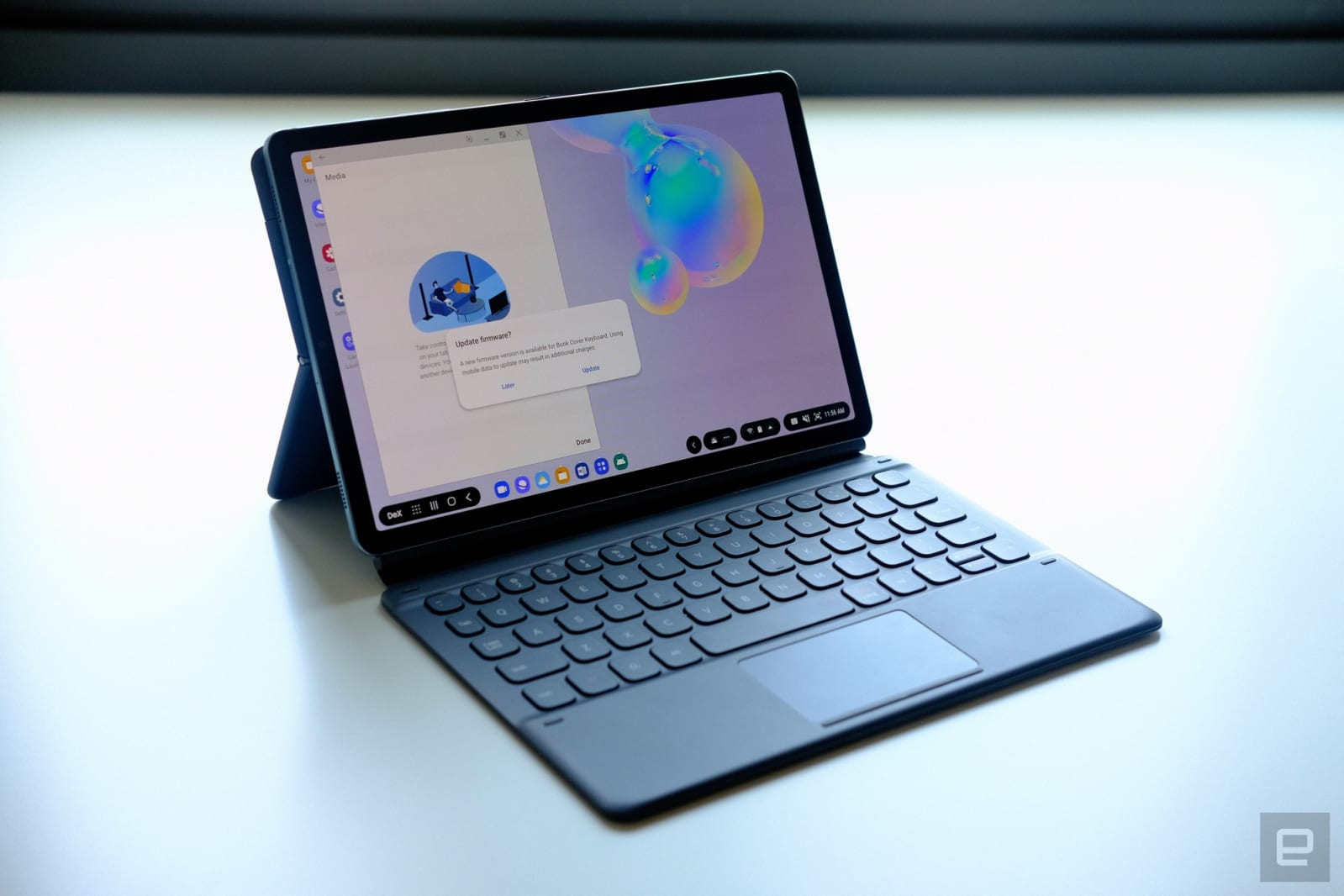 Samsung says that 86 percent of people who bought the Tab S4 were using the camera app "regularly." Because of these stubborn heathens, Samsung decided to upgrade the Tab S6's camera, giving it the first dual-lens setup on the company's slates. In addition to the primary 13-megapixel sensor, you'll get a 5-megapixel ultrawide option that can see up to 123 degrees. That's the same angle as on the Galaxy S10, and is about as wide as the human eye can see. Upfront, you'll find an 8-megapixel selfie camera that you can use for face recognition to unlock your Tab S6. You can also use the optical in-display fingerprint scanner here to log in.

Despite packing a Snapdragon 855 chipset, the Tab S6 doesn't use an ultrasonic in-display fingerprint reader that most phones with that CPU use. Samsung explained that this is due to the size of the screen, and said the speed between the two systems shouldn't be noticeable. We didn't have enough time to test this out, so I can't vouch for that -- stay tuned for our review to see if this claim holds true.

The Tab S6 will be available from September 6th at $649 for the base model, which offers 6GB of RAM and 128GB of storage. You can upgrade to an 8GB/256GB configuration for $729 should you need the extra space. For now, the Tab S6 looks like a nice, dainty device to take on your flight and get some work done. But I'll need to wait until I can perform a full review to tell whether it's good enough to execute serious multitasking; if that's what you're looking for, save your money until we find out.