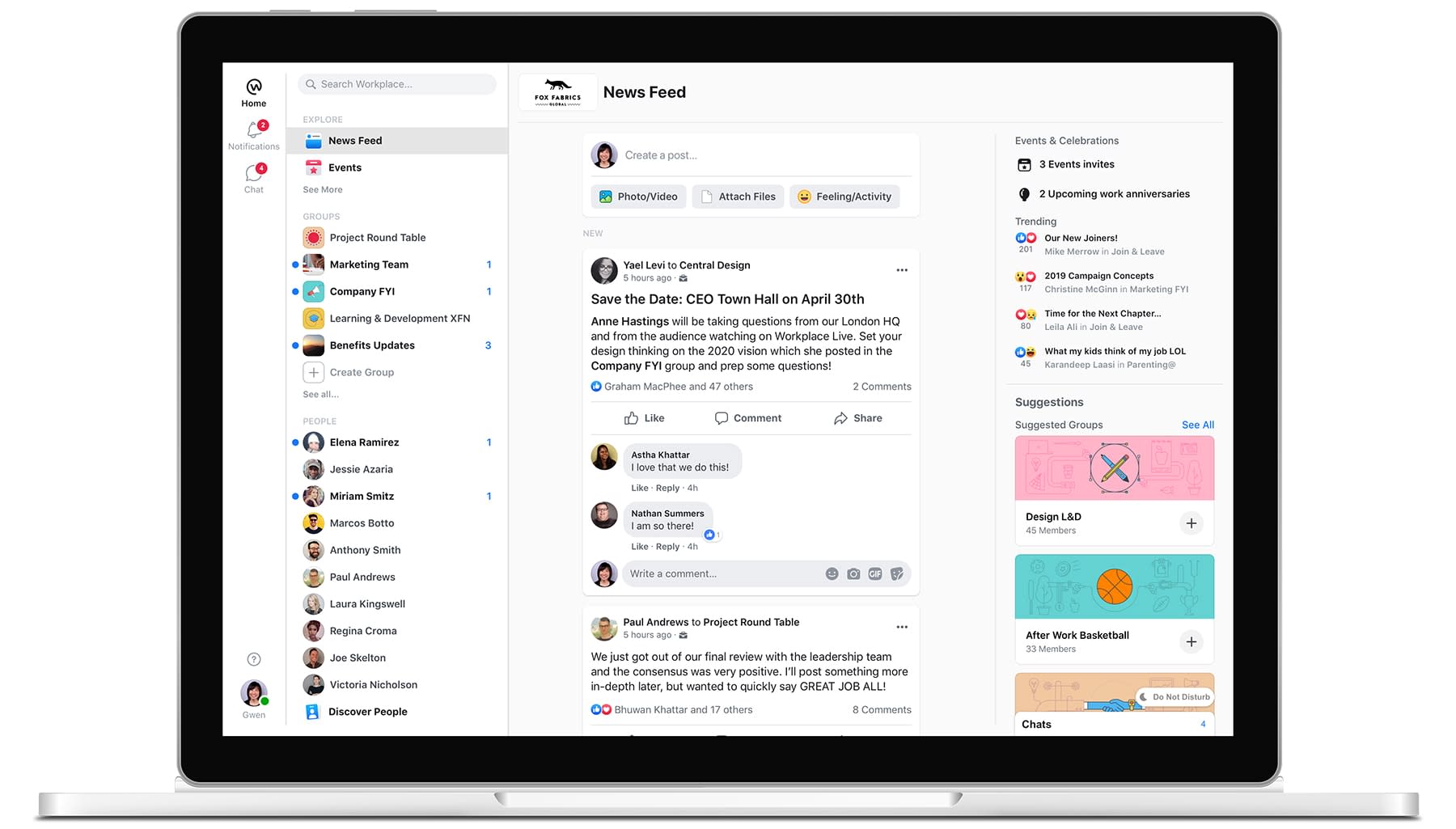 The company is taking a different approach to enterprise chat.

For the longest time, Facebook and its various technological tendrils, including WhatsApp and Instagram, have been a popular time killer at work. They're the sites and apps you flip to on your lunch break or when you can't stand looking at another Excel spreadsheet. Facebook, predictably, isn't content with filling these gaps in productivity. For the last few years, it's been pushing a version of Facebook called Workplace, which helps employees chat, collaborate and generally get stuff done.

It has, for the most part, looked and functioned just like Facebook. That was its biggest selling point, in fact -- the globe-spanning popularity of the social network meant that almost anyone could use it with minimal training. Starting this month, however, Facebook is taking a risk and rolling out a redesign that, well, makes Workplace a little less like Facebook.

The company teased the visual overhaul during its F8 developer conference in April. The biggest and most obvious change is the new navigation bar on the left-hand side of the screen, which now has three large circular icons: home, notifications and chat. Clicking on these will reveal a bunch of relevant shortcuts in a second slightly wider column.

Why the change? Well, the 'classic' Facebook design had a few drawbacks for enterprise customers. Almost half of them were using the old notification experience -- a tiny area in the top right-hand corner of the screen -- to figure out what they should be looking at next. Users would then click through or, more often, move their cursor to the left-hand rail to select the appropriate group or work chat. It was functional, but Facebook knew it could build something better and more efficient for users.

The new left-hand navigation bar isn't hugely original. Many desktop applications, including email client Spark and note-taking app Bear, use a similar three-column system. For Facebook, though, it wasn't a simple decision. The London-based Workplace team needed to create "a better productive workflow," McGinn explained, without losing the powerful familiarity of classic Facebook. But whatever they changed would inevitably make the product less like its consumer sibling. The designers were also aware that the core Facebook site was being overhauled at the same time in San Francisco. The Workplace crew, therefore, had to balance its own ideas with two versions of the consumer-side social network.

"It was pretty difficult," McGinn said.

That's why, perhaps, the rest of Workplace is largely unchanged. The site still has a newsfeed, for instance, steered by the Facebook algorithm. According to McGinn, it gives employees a bird's-eye view of their company and surfaces content they might not have found on their own. If your employer is changing its healthcare policy, for instance, it'll be posted in a group that you probably don't visit every day. The feed can also highlight parts of the company that you weren't aware of -- an after-hours soccer club, for instance, or first-aid class -- that you want to join.

"When I'm in what I call 'serendipity mode', I go to the feed," McGinn said. "Maybe I'm not in this notification mode, I'm in the mode of 'Okay, so what else is going on?' Every now and then, it surfaces something that there is no way I would have naturally navigated to, through notifications or browsing my groups, or anything."

Workplace has groups, too, which are the Facebook equivalent of Slack channels. Every group has a real-time chat room and, crucially, a space or 'wall' for posts that can blossom into multi-media threads. A single post can house 50 different content types -- a staggering number, but one that pales in comparison to regular Facebook. Still, the composer allows enterprise users to post text, photos, documents and PDF files (which convert into swipe-able images.) Workplace has some unique features too, such as automatic file scanning for viruses and malware.

Employees can, of course, leave a 'like' or emoji-inspired reaction on these posts. According to McGinn, most Workplace customers use these tools to quickly convey feedback such as "I approve" or "yep, I've seen this." Some companies have built inventive workflows around them. One employer, for instance, has a group set up purely for travel approvals. Staff post their desired flights and wait for a manager to 'like' them, which tells the group admins to book the ticket and send over the confirmation details.

"And of course, all of this can happen asynchronously," McGinn explained. "You don't need to be in the same office; you can be in different time zones, and you don't expect everyone to pile in [and post] immediately." 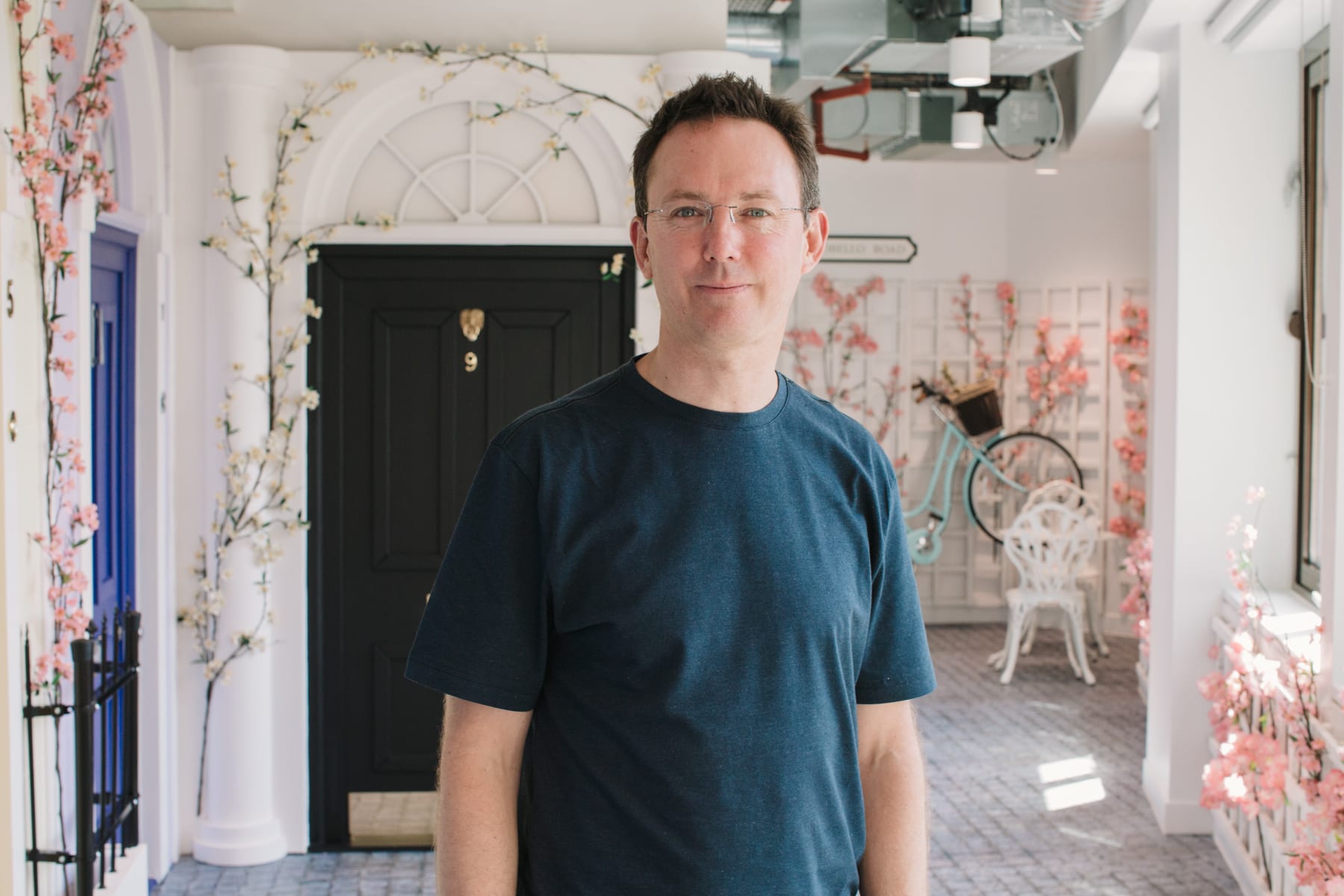 Facebook's advantages go further. Workplace has built-in live-streaming that allows CEOs to deliver big, company-wide announcements and, crucially, take employee-submitted questions in real-time. A small surf shop, McGinn said, once streamed a distributor meeting to show what stock they were ordering for next year. "The team felt like they were kind of there with him, and they felt fully informed," McGinn said. "Whereas what would've happened previously is he would've gone to that dealer meeting, come back and said, "Oh yeah, it was fine.'"

Workplace has Facebook's Safety Check feature, too, so staff can quickly check that their colleagues are okay after natural disasters and dangerous incidents. These features are useful but unusual for an enterprise-focused application. Smaller companies would consider them too expensive or inessential to justify the necessary development time and resources. The Workplace team, however, has the luxury of picking up and tweaking features that the consumer version of Facebook already developed. "We can make a few alterations that are more relevant for the workplace, and then we can launch it ourselves," McGinn said. "And we launch that in weeks or months, versus months and years."

"It's the equivalent of moving the milk aisle or vegetable aisle in the supermarket."

Facebook has been privately testing its redesign with select Workplace customers. At first, the feedback was mixed. Some people didn't like the change because, well, it was change. "It's the equivalent of moving the milk aisle or vegetable aisle in the supermarket," McGinn said. "Your default learned behavior has to change. And for the first week or two, it's pretty disruptive if you're used to shopping in that same place." These reactions are commonplace in the technology industry. When a popular site or piece of software -- including Facebook, Twitter and YouTube -- changes, there's always some backlash from people who prefer, or think they prefer, the previous design.

The Workplace team had to hold its nerve and see if people were still vexed after two or three days. Usually, critical testers would change their opinion and admit the redesign was simpler, cleaner and faster to navigate.

A subset of users commented that the new version had a lot of white space, though. "We dug into it quite a lot," McGinn said, "to try and understand if it was a problem. Was it the way the feedback was framed?" For the Workplace team, it was a "heart in mouth moment," he said. But with time, the designers realized that it was yet another example of 'you've moved the milk.' Apprehensive testers slowly changed their tune and admitted it was easier to focus on the core content displayed at the center of the page.

How group chats look in the new Workplace experience.

The new version wasn't perfect, though. Some customers said they weren't chatting as much or couldn't find some of their favorite features after opting into the redesign. The team would pore over these comments, make some changes and then run new tests with different companies. "We had to do multiple iterations of the UI," McGinn admitted.

Eventually, Facebook was happy with the number of beta testers opting into the new version and, more importantly, not reverting back a few days later. That's when the team knew it had surpassed the 'milk aisle phase' and could formally roll out its Workplace redesign to everyone.

Facebook has roughly two million paid users from over 30,000 companies including Walmart, Nestle and Vodafone. The platform has presumably grown since then, but it's likely smaller than both Slack and Microsoft Teams. Slack, for comparison, has over "over 88,000 paid customers," according to a spokesperson, that include 65 Fortune 100 companies. The enterprise darling hasn't disclosed paid users, however, since it hit the 3 million mark in May 2018. Microsoft, meanwhile, has 13 million daily active users who access Teams as part of their Office 365 subscription.

"We can always dial the volume up."

McGinn isn't worried about Workplace's momentum. "We're really happy with the traction so far," he said. The team is content, it seems, with the number of companies that have signed up so far and doesn't feel pressured to increase its marketing spend. "We can always dial the volume up," McGinn said. "We started last year running our own event for Workplace. We call it Flow and it takes place in October in Menlo Park. And then we run some events around the world. We'll do another big October Flow event again in San Francisco."

The confidence comes from the product. Workplace isn't a shameless Slack rip-off -- it's something subtly different. Every Workplace group, for instance, has a separate tab for live chat and threaded 'post' conversations. Both forms of communication are, therefore, equally encouraged and easy to find on the platform. In addition, Facebook has the news feed and a whole bunch of nice-to-have features, such as livestreaming and safety check, that are hard if not impossible to find elsewhere. For certain types of businesses, it's a product with no equal at the moment.