Can an open-source AI take on Amazon and Google?

It's only been a few years since Amazon unveiled the Alexa-powered Echo, but since then, smart speakers have become a major consumer-electronics category. Key to its success is the notion of the always-on virtual assistant, which other companies like Apple and Google have adopted as well. In fact, not only has Google made Assistant the driving force behind its Android smartphones, it has launched its own line of Echo rivals.

But underneath all of this technology is the potential risk to your privacy. In just the past few months, news reports have uncovered a series of alarming revelations that companies like Amazon, Google and even Apple have been listening in on conversations without permission. The data that they collect are also often stored indefinitely unless you explicitly delete it or turn off the recording ability. The companies have since responded that the listening of information only occurs to a small percentage of its customers and that the data are anonymized. While that may be true, it's disconcerting that none of this is transparent, and that the customer is rarely in complete control of their data.

An easy way to avoid this, of course, is to not partake in this technology at all. But a company based in Lawrence, Kansas, is working on an alternative solution: a virtual assistant aimed at preserving privacy and that's also open source. It's called Mycroft, and though you may not have heard of it, the company's been around since 2015.

"At the time, the only real voice technology that was in broad production was Siri," said Mycroft CEO and founder Joshua Montgomery to Engadget. Amazon had announced Alexa in November of 2014, but it was still in private beta when the idea for Mycroft came about. "We thought, you know, hey, this is the type of technology that could be really groundbreaking in the future. And scarcely a year later [in 2016], Amazon launched their Super Bowl ad with Alec Baldwin, and then Google got in on the game, and suddenly it's the fastest-growing segment of the technology market."

Montgomery is an aerospace engineer and USAF veteran with more than a passing interest in technology. In 2005, he started a small internet service provider based out of Lawrence called Wicked Broadband, which ended up being one of the few small ISPs in the country offering gigabit fiber, way before Google got on board. At the same time, he and a group of friends wanted a space to build fun things. For example, back in 2005, he collaborated on something called the Fox Blocker, a device that, when screwed into your TV, would block Fox News from showing up (Engadget wrote about it back in 2005). "It was a lot of fun," he laughed.

With the money and free time that Wicked afforded him, he helped create the Lawrence Center for Entrepreneurship, a co-working space that doubled as a place for makers, complete with laser cutters and 3D printers. "And you know, working there, we wanted to do something that was super-creative," said Montgomery. "One of the ways we thought would be really cool would be to add voice. I wanted to make a place like Iron Man's lab, with Jarvis."

Thus, the idea for Mycroft was born. The team even came up with a smart speaker reference device called the Mark I and put it on Kickstarter in August of 2015, just three months after Amazon debuted the very first Echo to the public. It funded, but it really was mostly intended for developers and makers like themselves.

And then the aforementioned Amazon ad happened. "We were just kind of buoyed along by the wave." It helped add legitimacy to their idea, but it was also incredibly daunting. 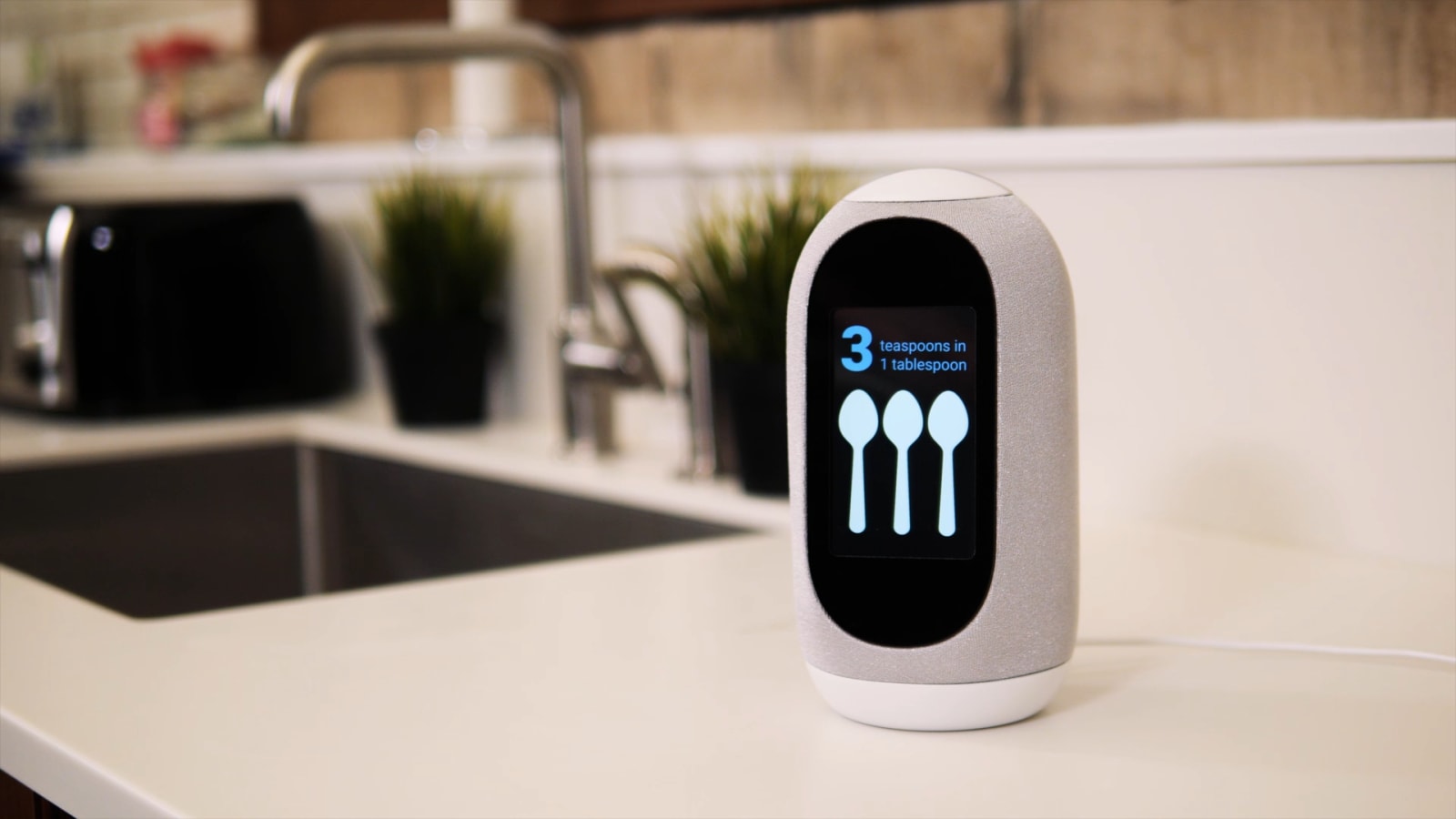 "When I originally went out and started talking to people to raise money, the feedback was that nobody's ever going to want one of these," Montgomery said. "They were saying, 'It seems a little crazy, and it's always listening, which is super-creepy.' And then Amazon did their ad and overnight, the reaction changed. It became 'Oh, Amazon's in that space, you're never going to have enough momentum to conquer it.'" The problems in fundraising went from selling a crazy product that nobody wanted to selling a non-crazy product that was going to get overwhelmed by the behemoth that is Amazon.

Still, Mycroft survived and has raised about $5 million from investors and the community. That's a far cry from the billions that Amazon and Google make, of course, but for a small seven-person team based in Kansas, that's enough to keep the project going.

Just like Alexa and Google's Assistant, Montgomery describes Mycroft as a platform. Even though the company has made the aforementioned Mark I speaker, around 90 percent of Mycroft's user base use it on their own devices, be it a Raspberry Pi or their own desktops or laptops. As of this writing, Montgomery says there are around 34,000 Mycroft users.

On top of that, there are several companies that have chosen to work with Mycroft because they didn't want to be beholden to Amazon or Google. Mycroft has received investment from Jaguar Land Rover, for example, and has implemented the Mycroft platform in an F-Type sports car as a test. A tiny personal robot from Spain called the Q.bo One uses Mycroft, and Chatterbox, a voice AI designed to teach children to code, also uses Mycroft as its platform. Montgomery says he's received a lot of attention from players in the hospitality industry, such as cruise ships and hotels, because there's a strong incentive to preserve the privacy of guests. 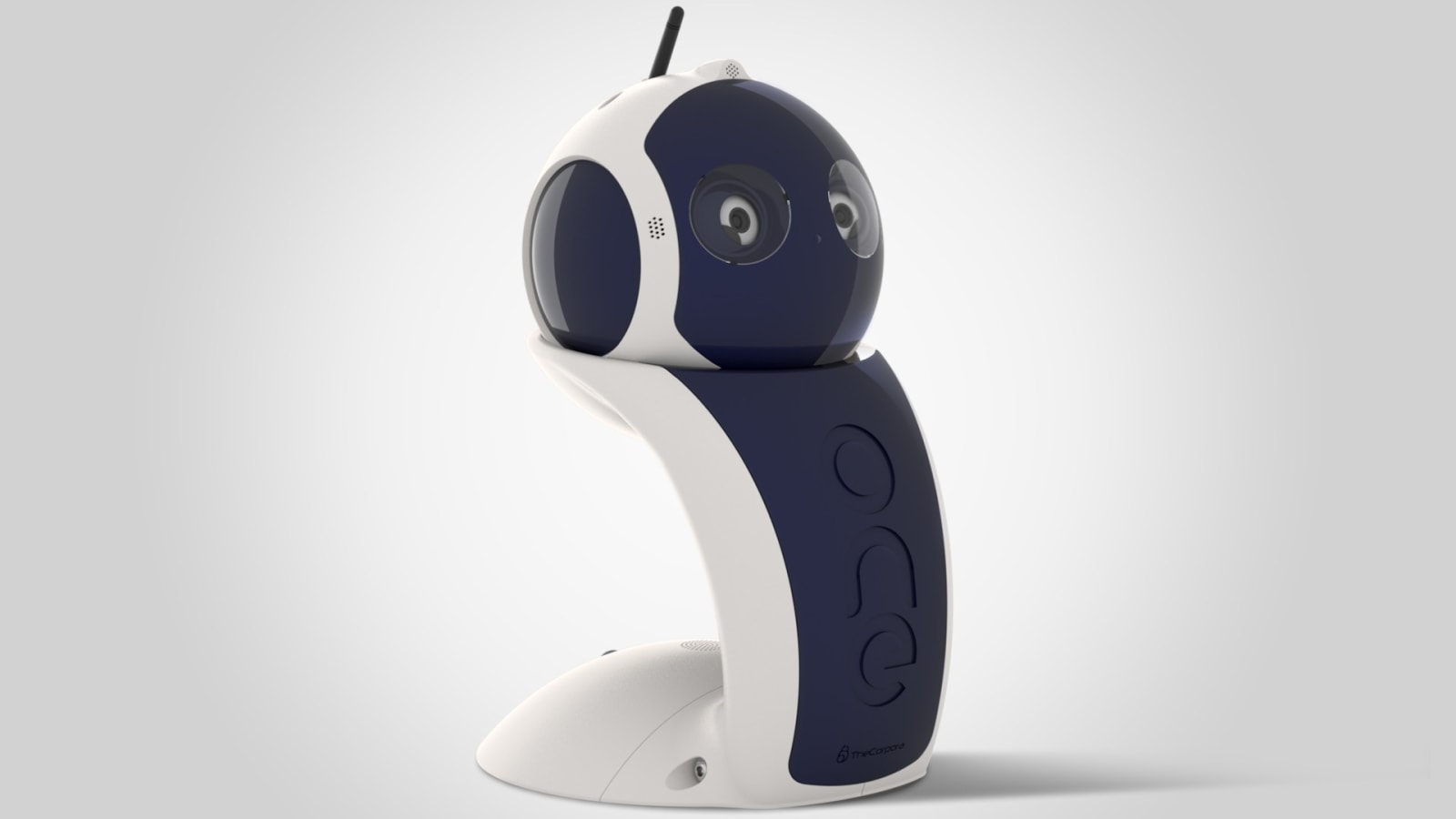 The Q.bo One is an open-source robot that uses Mycroft AI

"At the end of the day, our goal is the same as Google and Amazon, and it's to provide a voice experience so natural that you can't tell you're talking to a computer," he said. "The difference is that we're building an open platform, and we want to make it available to everyone as opposed to locking it up in a vault somewhere and then charging for access. And we're aiming at preserving privacy."

One way Mycroft protects users' privacy is ensuring that all of the data submitted is entirely opt-in. "Around 15 percent of our community contributes their data to improve the technology. For the remaining 85 percent, we don't keep that data at all. It just disappears." Mycroft also offers the right to be forgotten, which means that even if you did submit your data in the past, you can choose to delete all of it. "There is absolutely no danger of somebody listening in to your private conversations if you don't want it to happen," he said.

The privacy aspect of these technologies is a bigger issue than most people realize, Montgomery said. "The path that we're setting ourselves on, in terms of being willing to give up all privacy to these companies in exchange for, you know, being able to get the weather on-demand or set a timer is really alarming."

"The level of integration that voice assistants will eventually have on our day-to-day lives is going to be equivalent to the level of integration that smartphones have on our lives today. And so giving these companies access to everything we say and everything we do and allowing them to take that and manipulate us and monetize us is something really scary." 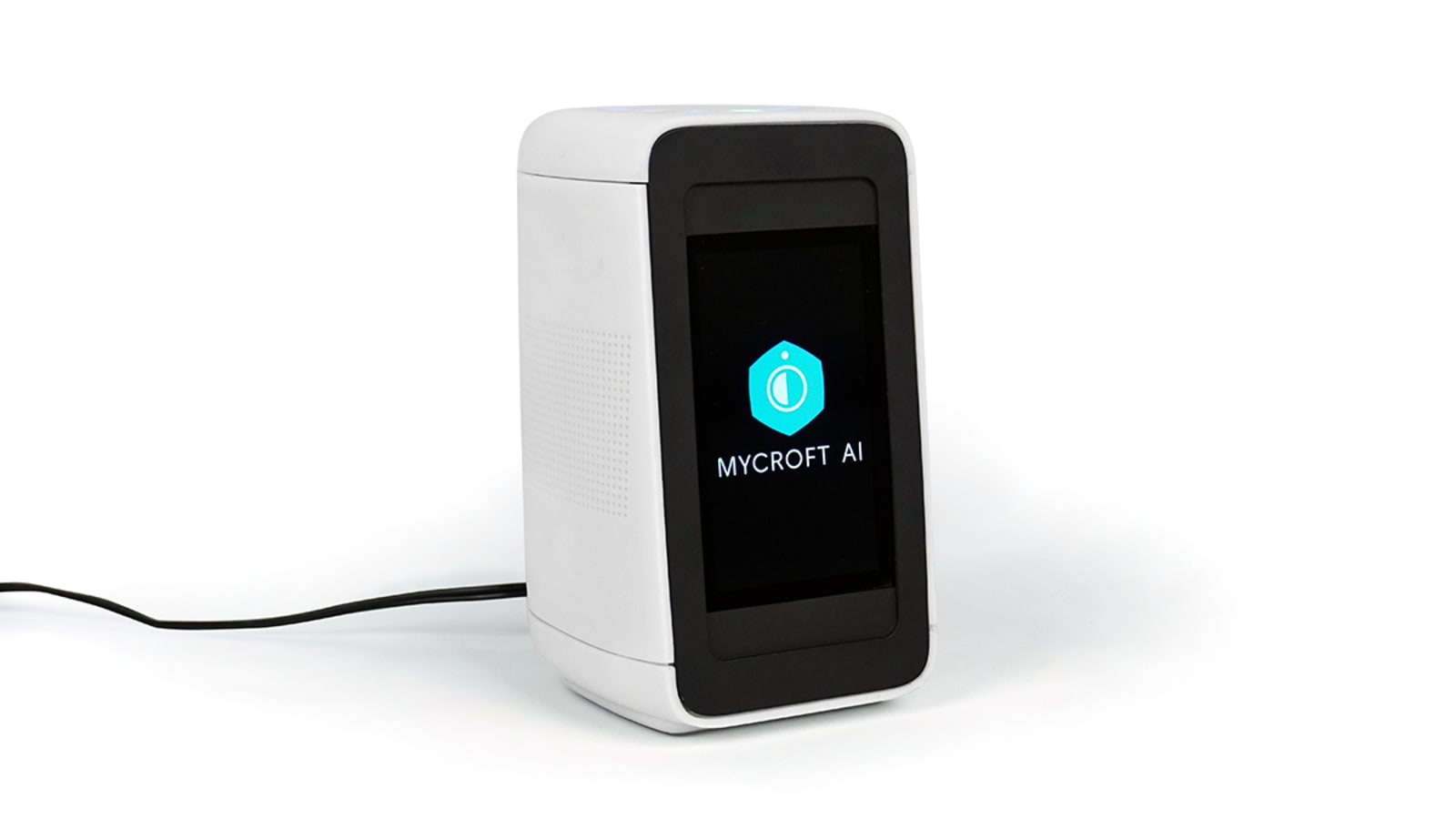 An updated design of the Mycroft Mark II.

Of course, as such a small company, Mycroft has run into problems along the way that are probably relatively minor for companies like Amazon and Google. For example, with its work with Jaguar, it learned that it needed to support 40 languages instead of just English. It had to collaborate with Mozilla and the larger open-source community for internationalization efforts, which unfortunately takes a lot of time.

"For companies like Amazon and Google, they're able to acquire pillar technologies as complete companies that were already in business for decades," Montgomery said. "For us, we have to build it from the ground up."

Another issue is that in order to build machine-learning, you have to have a bunch of data, and with only a 15 percent contribution from the community, that, again, takes a lot of time. Yet, Montgomery said that Precise, its wake-word spotter -- the tech used to detect voice -- is on par with Amazon and Google.

That's not to say it's perfect. "Just like technologies from those companies, the data set is biased toward white men because it's white guys that contributed all the data," he said. That's even more so with the Mycroft community, as Google and Amazon by default have larger and therefore more diverse user bases to cull from. "We're actively seeking to diversify the data set and make it better for everybody." More recently, Mycroft has been working to build a local machine-learning tool that allows people to directly train their wake word on-device itself, which should help with the potential issue of the device not recognizing different voices.

As of right now and for the foreseeable future, Montgomery said that Mycroft will be focused on getting the best user experience possible, especially on core functions like alarms, timers and getting the news and weather. It's also concentrating its efforts on the production of the second-gen of its smart speaker, the Mark II, to Kickstarter backers. But while the Mark II is a much more consumer-friendly version of the hardware, Montgomery admits that the Mycroft platform is not quite consumer-ready just yet.

Still, he's optimistic that they can get it done. "Using our approach and to be financially successful is important. We're continuing to build trust with the community, and when more of those people contribute data, we can continue to improve."