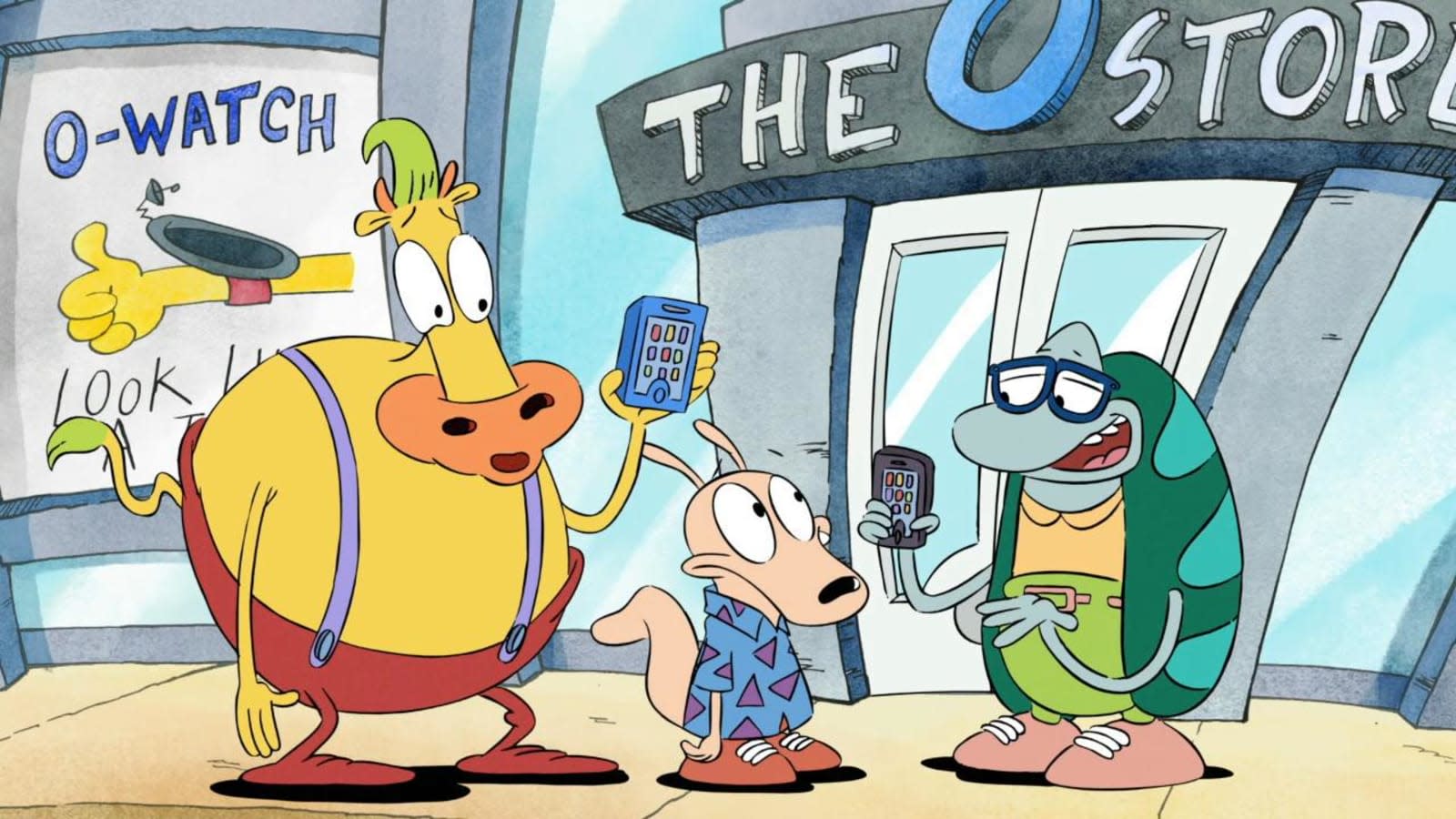 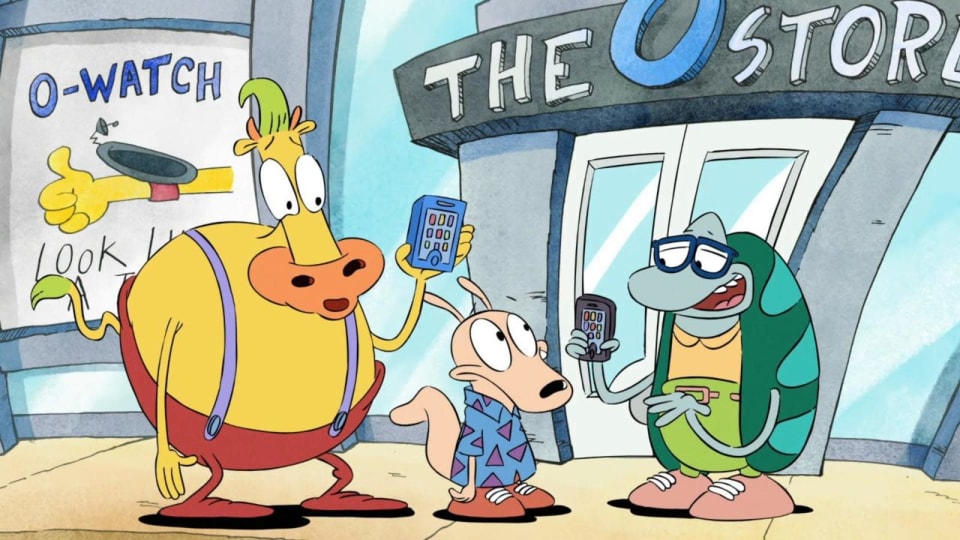 As far as boundary-pushing '90s Nickelodeon cartoons go, Rocko's Modern Life has aged the best. It punched way above the heads of the network's young audience when it aired, and it was far more grounded in real-world issues than the likes of Ren and Stimpy. Now that its fans are well into adulthood (myself included), the show's social commentary is more resonant than ever. That makes Rocko the perfect classic cartoon to bring back today, and the new Netflix film, Static Cling, doesn't disappoint.

Set 20 years after the end of the original series, the movie starts with Rocko, his best friend Heffer, and their neurotic turtle compatriot Filburt, floating through space (it's a long story). Somehow, they've survived on scraps of food in Rocko's house, with a single tape of their favorite '90s cartoon, "The Fatheads," as their only source of entertainment. Before you can shout "Spunky!", the tape gets destroyed. But, as they commiserate, they realize the rocket controls that could get them home was stuck on Heffer's butt the whole time. So it goes.

Returning to O-Town, as they seek out more Fatheads episodes, is like leaping forward in time after they've been stuck in the '90s. Before you know it, they're racing to get the latest O-phone (which is almost immediately replaced by a new model), hitting up BuzzBucks coffee shops and getting stomach viruses from trendy food trucks. Rocko creator Joe Murray made a point of criticizing rampant consumerism and huge corporations in the original series, and that anti-capitalist attitude hasn't gone anywhere. Sure, it's not exactly subtle, but it's still sharper social commentary than you'll find in most Nickelodeon cartoons.

Eventually, Rocko and crew learn that The Fatheads has been off the air for years -- so like any nostalgic Millennial, they set out to reboot the series. As a stranger in a strange future, it's really the last connection to the past that Rocko has left. But his mission is also obviously a reflection of the nostalgic energy that made Static Cling possible in the first place. Both Rocko and the audience are instead trying to fill the gaping holes in their hearts with pop culture from the past. (Stares directly at the camera.)

I won't spoil too much about the film -- mostly because it's very easy to run through everything that happens in its short 45-minute run time. But, as you'd expect, Rocko's quest to reboot the Fatheads is fraught with obstacles. We quickly learn that cashing in on that show is the only thing that will save its parent company, Conglom-O, from going broke. And in a bid to produce is at a lower cost, they first turn to computer animation: "Make art is easy with computers!," quips the the snooty, ambiguously European-sounding Chameleon twins. "We can make anything in a passionless and cheap way!," they add. 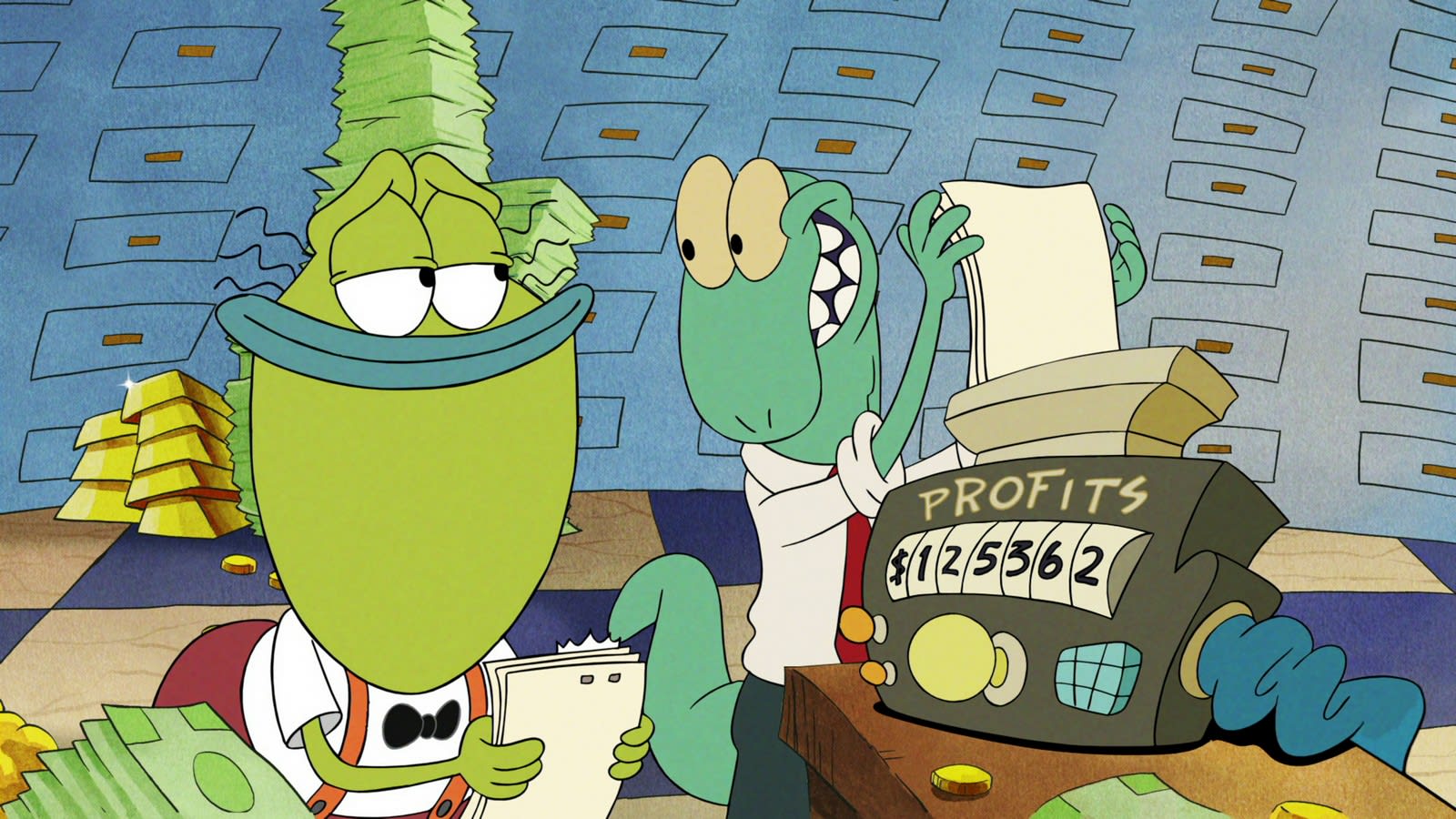 Murray, co-director Cosmo Segurson, and their co-writers are clearly positioning hand-drawn animation against CG. But the complaint seems a bit regressive today, especially when the overarching message of the film is about embracing change as the key to happiness. Sure, there's a lot of lazy computer animation out there, just look at the wildly popular kids content on YouTube. But you could say the same about cartoons of yore that were made as cheaply as possible, with limited frames, low articulation and constantly recycled backgrounds.

Maybe that's part of the point of Static Cling, though. By casting a critical lens on modern society, once again, Murray and crew force the audience to wrestle with their own habits and assumptions. But that doesn't mean the creators aren't guilty of having blindspots of their own (something Rocko also explicitly deals with at the end of the film).

Where it counts, the Rocko team manages to show love to marginalized groups. Even before the film was released, it was praised for its depiction of a trans character, who is introduced to Rocko and his friends without any judgment. When beloved comedians like Dave Chappelle have trouble discussing transgender people without mocking them, it's even more noteworthy to see genuine trans acceptance coming from a cartoon that's still filled with fart jokes and thinly veiled adult humor.

In a weird way, Rocko's Modern Life prepared me for adulthood. The original series explored just about everything a twenty-something would encounter, from workplace issues (and potentially losing your soul when you become management), to dating and day-to-day chores. While Static Cling is mostly a nostalgia play, it's nice to see our favorite wallaby trying to figure things out, just like the rest of us.

In this article: art, entertainment, Netflix, Rocko's Moderl Life: Static Cling, Rocko's Modern Life
All products recommended by Engadget are selected by our editorial team, independent of our parent company. Some of our stories include affiliate links. If you buy something through one of these links, we may earn an affiliate commission.