‘Disintegration’ is a tactical shooter that questions transhumanism

The co-creator of Halo has a bold new vision.

At a glance, Disintegration looks a tad generic. The battle-ready robots, dressed in fashionable jackets and scarves, feel like they were ripped straight out of a Destiny artbook. And there's a reason for that -- the game is being developed by Halo co-creator Marcus Lehto and his indie studio V1 Interactive. Don't be fooled by the overly-familiar character designs, though. Disintegration has a world and technological fiction that is intriguing and different from the vast majority of science fiction shooters, including those that Lehto worked on during his long career at Bungie.

According to the director, Disintegration is set 150 to 200 years in the future. The robots in this imagined future aren't controlled by artificial intelligence, though. They're armored shells that contain fleshy and beautifully imperfect human brains.

Why did humanity do this? To protect themselves from a planet that has been ravaged by climate change, overpopulation, food shortages and disease. "The world is really stressed," Lehto told Engadget. "This pandemic has just destroyed the human race to the point where we're actually concerned that there's a potential extinction event on the horizon." In response, scientists perfected 'integration,' a process that describes the safe removal and mechanical fusion of the human brain. It was meant to be a temporary fix, though, until humanity could reverse the damage it had inflicted on the planet.

"They developed this process of integration in order to preserve the humans long enough to find a solution," Lehto said. "Ultimately, the carrot hanging on the end of the stick was to become human again. That's what everybody wanted, initially."

According to the official Disintegration website, the technology was "a good thing for decades." But then some humans realized that they preferred their mechanical bodies. With the right parts, they could be faster, stronger and physically larger than their flesh-and-bone counterparts. Before long, an organized group called Rayonne emerged. It thought the process should be permanent and embraced by everyone on Earth. "They have a post-humanist kind of agenda," Lehto explained. Unsurprisingly, war broke out among the planet's remaining survivors.

In the single-player campaign, you play an integrated human called Romer Shoal who has rebelled against the Rayonne. He pilots a hovering 'Gravcycle' that was originally designed for search and rescue operations. These vehicles were weaponized during the war and later deployed by the Rayonne to find and flush out any remaining humans. Shoal, however, uses his Gravcycle to fight back and direct a handful of ground-based rebels during the game. 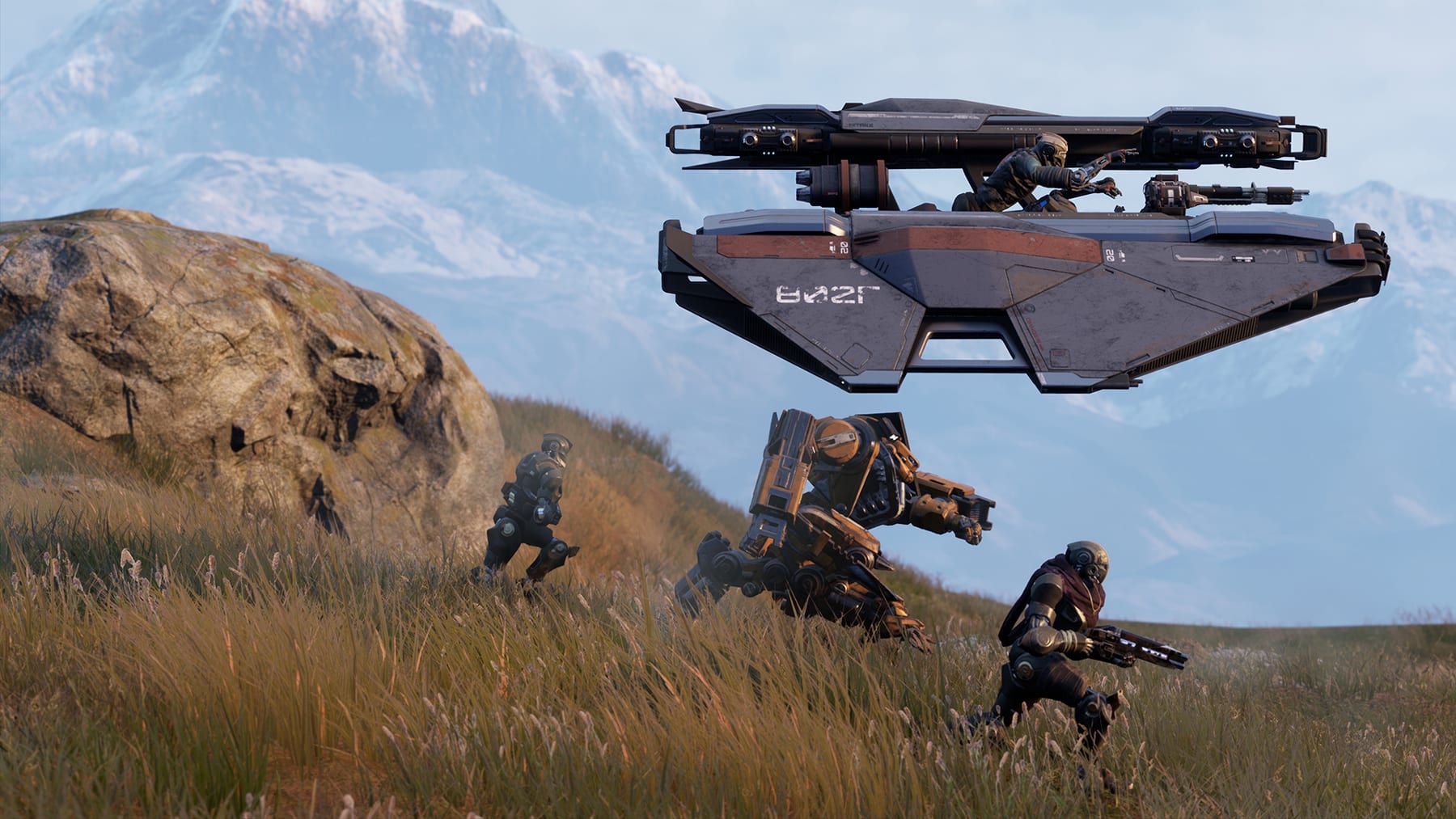 Every mission is, therefore, a curious combination of aerial strategy and first-person shooting. A fast-paced medley of Titanfall and Total War. "They're the grenade, and you're the rifle," Lehto said. "You think of them as a unit. Together, they're a crew. As soon as that clicks, you understand how devastatingly awesome your tactical advantage is in combat."

Shoal and his friends still wear clothes. It makes them look cool, of course, but also signals their desire to become fleshy humans again. They long to drink beer and coffee. To make love and have children. "They can't do that as robots," Lehto said. The Rayonne, meanwhile, have little interest in their original form. "They have no desire to go back," Lehto explained. "They have, in fact, changed the trajectory of humanity so dramatically that they're no longer human in form. They're taking on monstrous forms that you encounter mostly in the single-player campaign."

It's a refreshing concept with obvious gameplay benefits. In Disintegration, humanity hasn't figured out how to upload or digitize the human brain. It's still trapped in a physical body and is, therefore, vulnerable to attack. That makes every battle a nervy affair. "If a bullet makes it through [the wearer's mechanical armor], that brain and that individual is never going to live again," Lehto explains. If a robot is destroyed, however, the brain can be jettisoned. Shoal and his companions have to act quickly, though, to save and later integrate the mind in another mechanical body. "It creates that kind of gut-clenching moment where you've got to really risk yourself and your safety," Lehto said, "to reach down and grab those units in time." 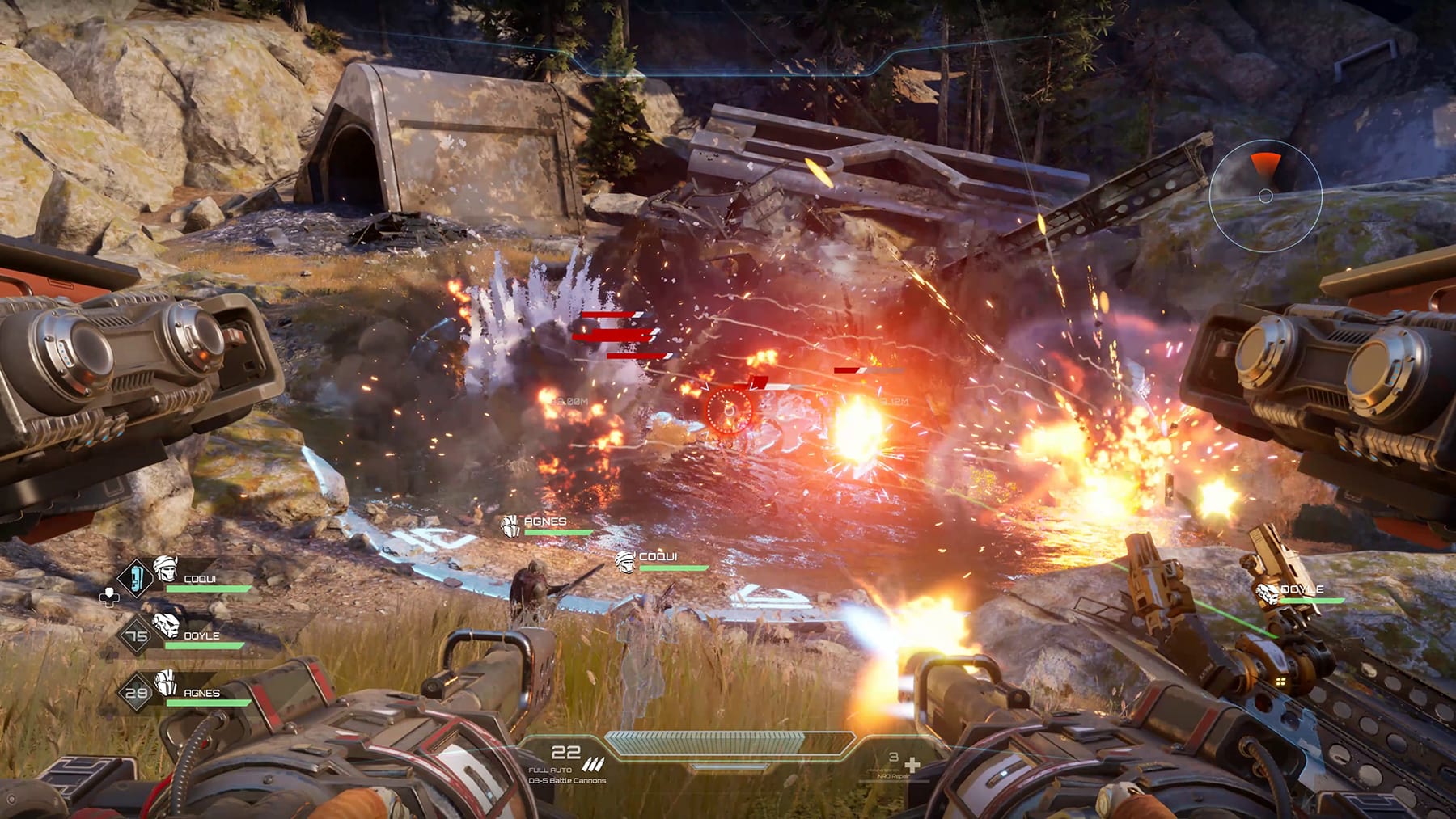 Traditional AI -- the kind brought to life with ones and zeros -- doesn't seem to feature in Disintegration. Lehto agreed it's "inevitable" that humanity will eventually develop software with human-level intelligence. But for its first game, V1 Interactive wanted something "a little bit more grounded in reality." Integration, Lehto argued, is "a little bit more tactile and approachable" because people already have a strong connection with physical hardware. Reversing the integration process -- "disintegration" -- is the equivalent of leaving your phone at home. "That disconnection from technology," he told Engadget. "That's the feeling we're tapping into."

Shoal and his friends will start in Colorado, travel across the US and, eventually, attack the Rayonne in frosty Iceland. The dystopian road trip should offer some visual variety and, most likely, environmental hazards for players to contend with. They'll also show the extent of humanity's devastation on the planet, and how different corners of the Earth have been affected by integration. "It plays very well to the story," Lehto teased.

"It's one potential future taken to its extreme conclusion."

The co-creator of Halo describes his take on transhumanism as an allegory. A warning about the environment and what might happen if we pursue technology without developing proper safeguards or considering its long-term consequences. "It's really just one potential future taken to its extreme conclusion," he said.

V1 Interactive is a 30-person studio based in Redmond, Washington. It doesn't have the manpower or funding to compete with Bungie and 343 Industries on spectacle. What it clearly has in droves, though, is vision. A slick gameplay concept paired with a take on technological dystopia that is rarely seen or explored in games. Who knows -- that could be enough to kick-start a universe and globe-spanning fandom equal to Master Chief. Or, at the very least, something popular enough to fund additional Disintegration games.