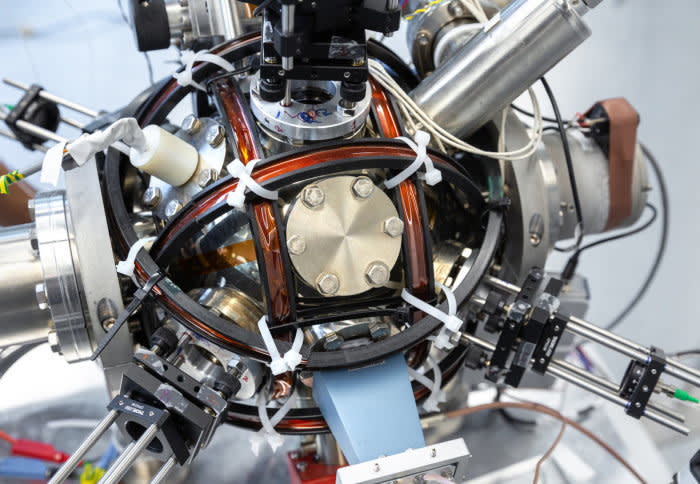 Scientists have long known that the universe is expanding, but in the '90s data from the Hubble telescope showed something strange: the expansion is happening faster now than it did when the universe was younger. This flew in the face of all our models of the universe, and physicists realized that there must be some kind of energy throughout space which accelerates the universe's expansion. They named this phenomenon dark energy, and decades later we still have little idea what it could be.

One possible explanation for the phenomenon is that dark energy is the fifth force acting on matter, along with the gravitational, electromagnetic, and strong and weak nuclear forces. Recently a team at Imperial College London decided to test this fifth force theory by performing an experiment on single atoms.

The experiment worked by examining whether a fifth force becomes weaker when there is more matter present - the opposite of gravitational force, which is stronger when there is more matter nearby. If this were the case, you would expect to find the fifth force strongly present in the vacuum of space, but weak when around matter such as here on earth.

To test this, the team used an instrument called an atom interferometer to detect any extra forces which might be acting on an atom. They put a sphere of metal the size of a marble into a vacuum chamber and let atoms fall freely through the chamber. In theory, if there were a fifth force acting on the atoms then they would change paths slightly as they passed the sphere.

However, the team found no evidence of the atoms changing paths, so no evidence of a fifth force. This means physicists can rule out a whole class of models of dark energy as a fifth force and focus on other models to explain the mysterious phenomenon.

The relative simplicity of this experiment is one of its strengths, according to one of the lead scientists. "It is very exciting to be able to discover something about the evolution of the universe using a table-top experiment in a London basement," said Professor Ed Hinds of the Department of Physics at Imperial.

In this article: atom interferometer, atoms, dark energy, Imperial College London, space, tomorrow
All products recommended by Engadget are selected by our editorial team, independent of our parent company. Some of our stories include affiliate links. If you buy something through one of these links, we may earn an affiliate commission.