HMD's Nokia 7.2 could be the new mid-range smartphone to beat

Android One, great style, impressive cameras -- what's not to like?

The Nokia 7.1 was a fan-favorite, so a sequel was all but inevitable — what's more surprising is just how ambitious it is. HMD just pulled back the curtain on the Nokia 7.2 at IFA in Berlin today, and if nothing else, it's a clear sign that the Finnish company is aiming for the top of the mid-range smartphone pack.

To do that, HMD focused its efforts on two main areas: The phone's display and its cameras. (You know, the stuff you were probably going to use most often anyway.) This year's 7.2 packs a noticeably bigger screen than the 7.1 — think 6.3-inches, up from around 5.8 — but the quality of the display might be even more valuable than the extra real estate it provides. It's as crisp as you'd expect a Full HD+ screen to be, and its color reproduction seemed quite nice right out of the box. That was true even when I moved around the demo room and into different lighting conditions, thanks to an ambient light sensor that automatically tunes the display's color temperature depending on your surroundings.

More importantly, HMD also worked in a dedicated Pixelworks display to processor help to upscale videos to HDR on the fly. Does a roughly $350 phone really need HDR support? Arguably no, but I'm still pleased HMD found a way to make it work in a device this inexpensive. 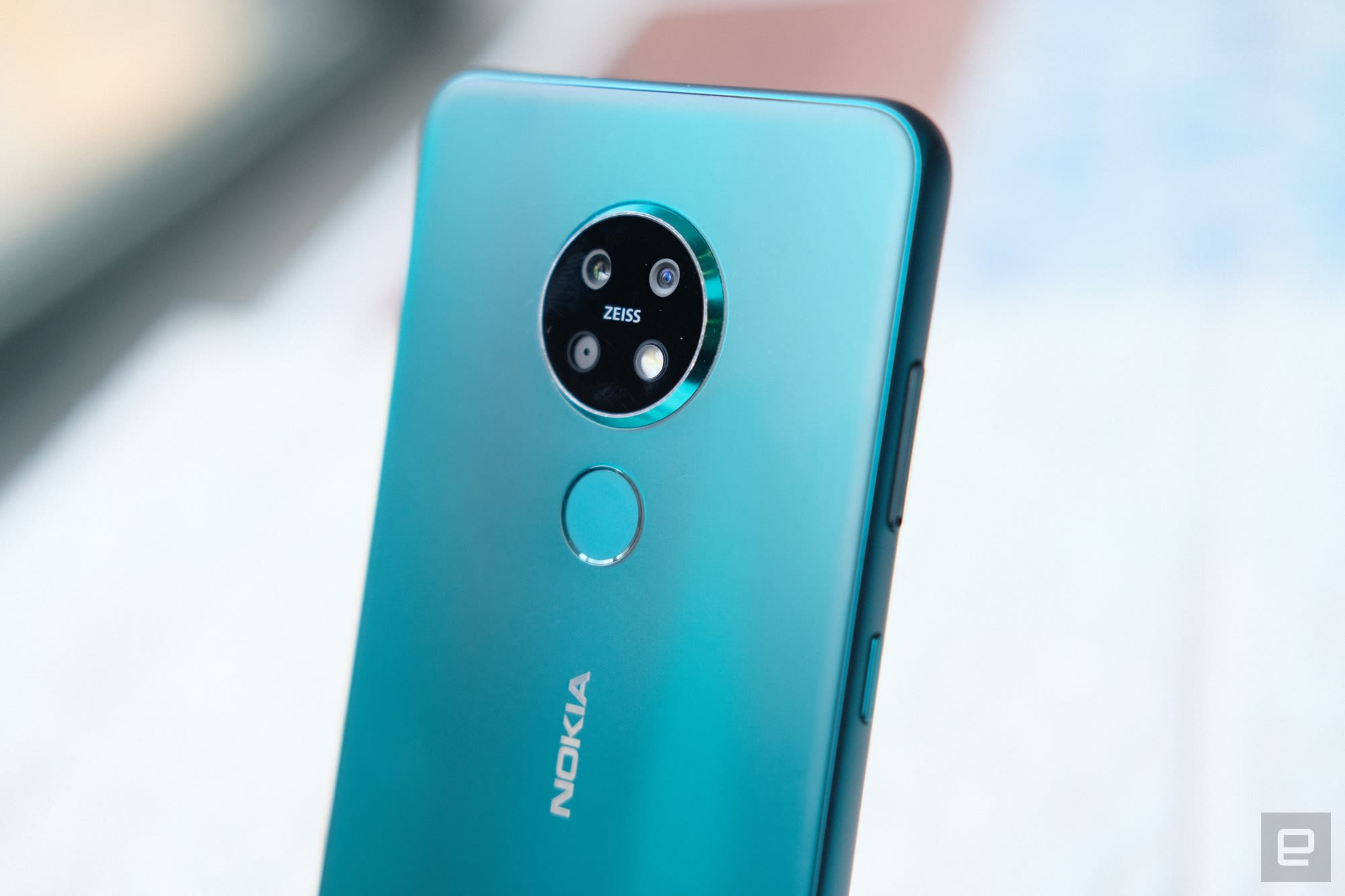 As nice as this screen is, though, the Nokia 7.2's camera system is the real draw here. HMD likes to say it's the first Nokia phone with a triple camera around back, and while it's not nearly as crazy as the five-camera setup used in the Nokia 9 PureView, the 7.2 is arguably a better all-around performer. A 48-megapixel sensor will handle most of the heavy lifting, and if you really wanted to, you could snap photos at that full resolution all day long. You'd be better off shooting in the default 12-megapixel mode, though, since it combines multiple pixels on the sensor into one for improved clarity and low-light performance.

Beyond that, HMD also ran with an 8-megapixel wide camera that can capture 118 degrees of whatever's in front of it, and a depth sensor for more satisfying portraits. Add some Zeiss optics and we're ultimately left with a camera that, during our limited time together, felt surprisingly good for the price.

I couldn't smuggle many sample photos out of my briefing, but I can't not share this anecdote: While there with a few other reviewers, I snapped a quick photo of a good friend just to see what the camera was capable of. Upon reviewing the results, we found the 7.2 had rendered his well-lit face with such clarity that it was almost sort of a buzzkill. "When did we get old?," he asked me. I don't know, buddy. I just don't know.

The biggest lesson HMD seemed to learn from the Nokia 9 PureView was about the value of good software. It's non-negotiable. Thankfully, the handful of additional camera software tricks here seem pretty helpful. HMD says it partnered with Zeiss to recreate the signature bokeh characteristics of some old-timey lenses to give portraits an extra dose of photo-nerd flair. And while I haven't tried it yet — our meeting was in the middle of the afternoon — the 7.2's Night Mode is meant to combine up to 20 frames in low light into a single, improved Night shot.

The rest of the 7.2 is no slouch either: There's a Snapdragon 660 inside, along with 4GB of RAM, which is more than enough to make the clean, Android One-certified version of Android Pie fly. The phone also packs 128GB of internal storage (which you can augment with microSD cards as large as 512GB), and a 3,500mAh battery. I half-wish HMD ran with a bigger battery here, but considering the price tag and the features involved, I guess they had to save money somewhere. 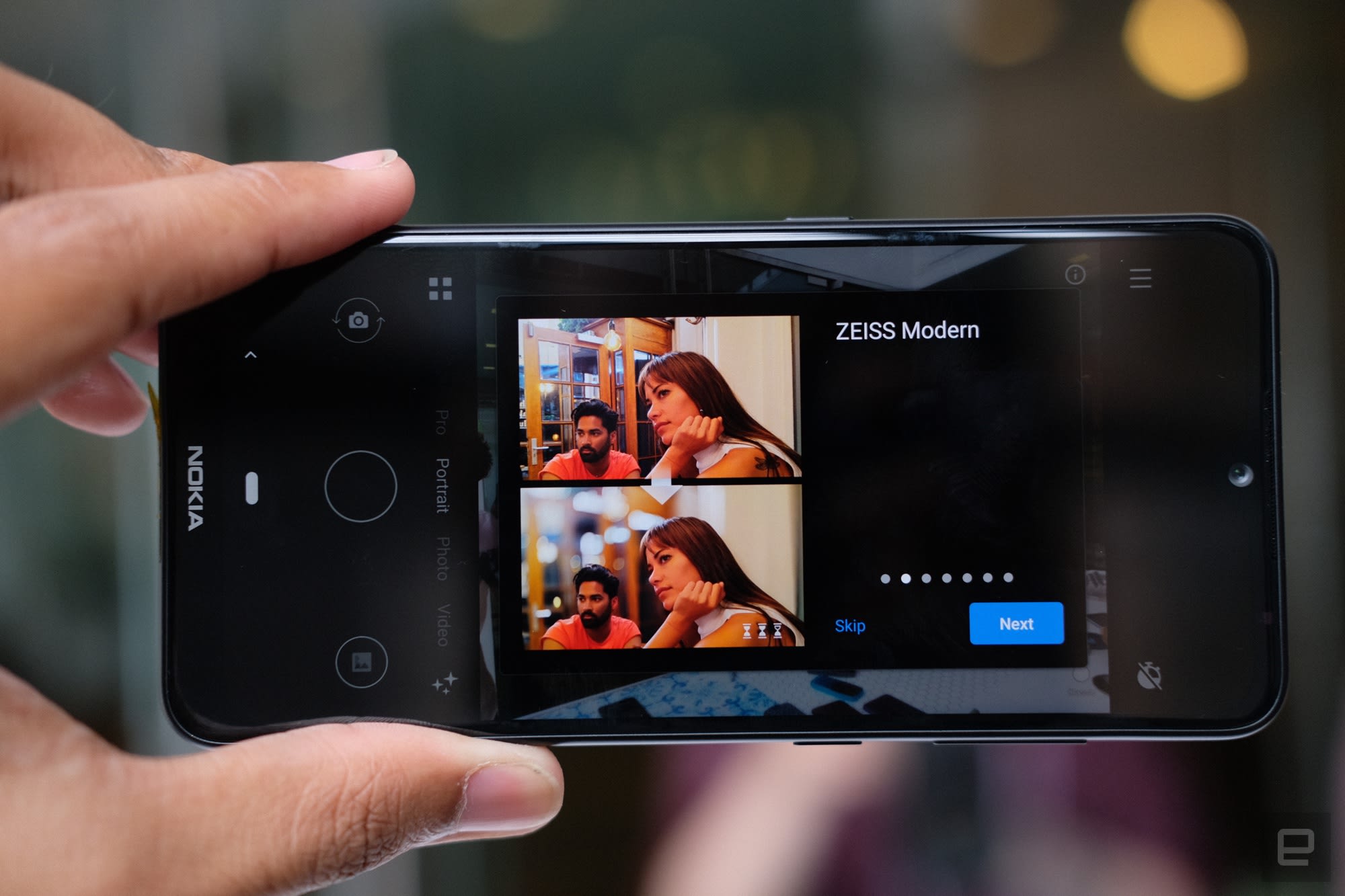 Thankfully, HMD did a fine job crafting a body to fit around these components. There frame here is made of polycarbonate sandwiched between panes of Gorilla Glass, and the phone's back features a sort of satin-y, light-diffusing finish that gives the whole package a more premium look than you'd expect from a phone that costs this much. Oh, and word to the wise: If you're even considering buying this phone (which you probably should), strongly consider the cyan green color way. It's reminiscent of the Ocean Depths Essential phone from a few years back, and it's just stunning. I doubt my photos are doing it any justice.

If for whatever reason the 7.2 is a bit too much phone for you, Nokia has crafted a backup plan of sorts. This year's Nokia 6.2 essentially recycles the 7.2's screen and body (albeit with some less swanky materials) but uses a 16-megapixel sensor as the centerpiece of its triple camera system. The Snapdragon 636 inside didn't run noticeably slower than the slightly improved chipset in the 7.2, thankfully, and the rest of the spec sheet is largely the same. That's not bad when you consider that the Nokia 6.2 is expected to sell for about €210 ($230), but after playing with the 7.2 for just a bit, it definitely seems worth the splurge for the camera alone.

All products recommended by Engadget are selected by our editorial team, independent of our parent company. Some of our stories include affiliate links. If you buy something through one of these links, we may earn an affiliate commission. All prices are correct at the time of publishing.
View All Comments
HMD's Nokia 7.2 could be the new mid-range smartphone to beat