The Move ECG is available to buy from today.
D. Cooper|09.05.19
@danielwcooper

Withings' latest watch has kept us hanging on for quite some time. Originally announced in January and meant to arrive in the Spring, the Withings Move ECG is ready to buy, starting today for $129.95 / €129.95 / £129.95. I've spent the last couple of days with one on my wrist, trying to fathom whether it was worth the wait.

The Move ECG is, like almost all of Withings' products, a hybrid analog watch and fitness tracker. The most notable feature this time is the built-in ECG, enabling you to make rudimentary measurements of your heart's health while on the go. Until this week, there weren't that many smart ECG watches on the market, so its presence here makes it still very much a novelty -- especially at this price.

It looks as if someone's taken a bicycle pump to a regular watch, with a bouncy, round, inflated design. The Swiss minimalism that defined Withings' previous watches has been dialed down in favor of something less formal, something that looks friendlier. There's a sense of whimsy here that draws from the 1955 Citroen DS and the Pompidou Centre. I mean it all looks quite French.

Despite having a 38mm case, it actually looks a lot smaller on your wrist than other watches of its class. If, like me, you have beefier forearms then there's the slight risk that it'll look a tad silly when worn with a t-shirt. It's certainly trying to fit into that Swatch-shaped hole in your life, rather than supplanting that submariner you're normally wearing. 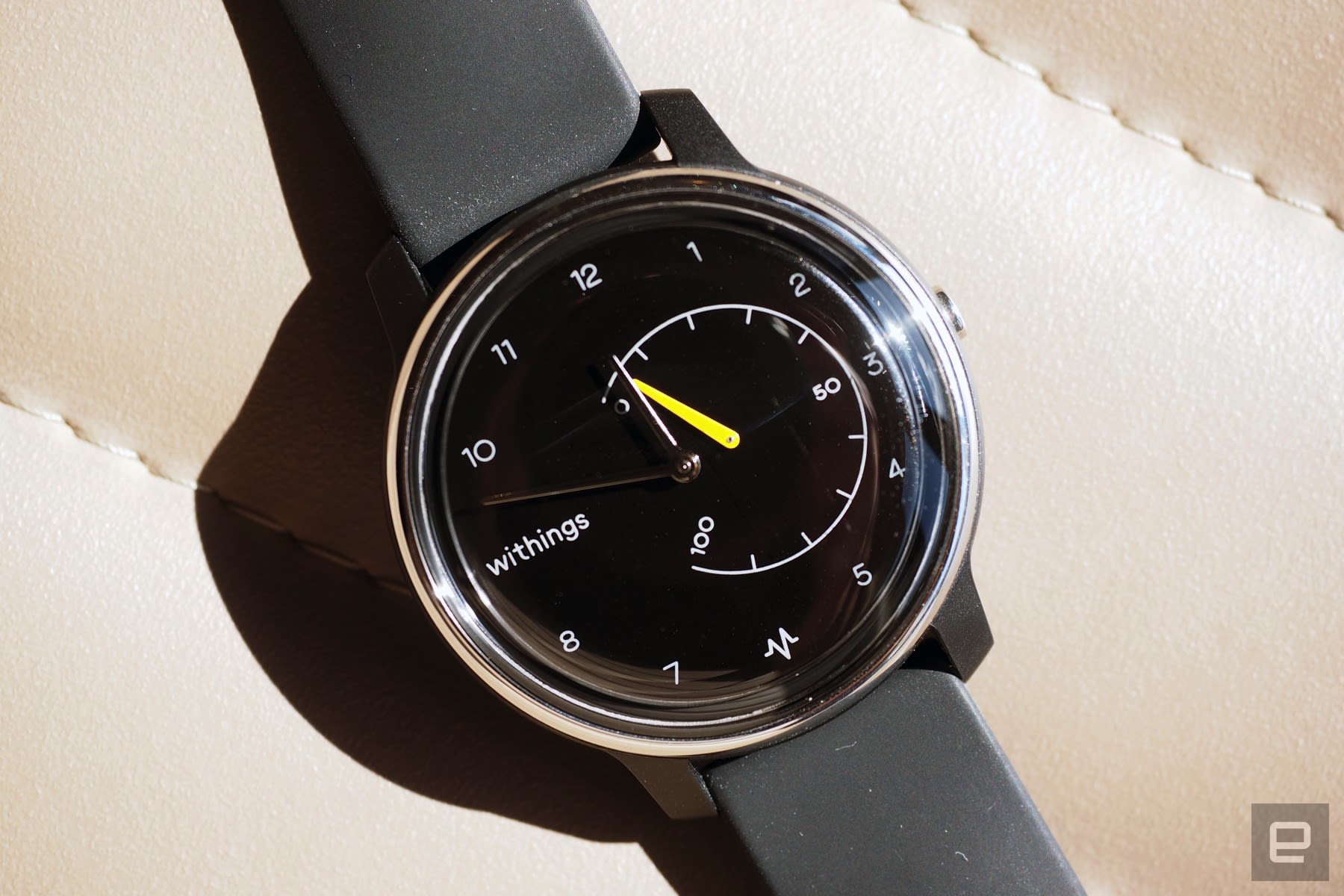 The Move ECG comes in two different colors: Black and grey, with a pop of yellow on the subdial, or a more restrained white and blue. Both come with a shiny silver bezel that acts as the third sensor for the ECG circuit, with the other two pressed into your wrist. All three need to be touching skin for the measurement of your heart to work.

Taking an ECG is pretty easy, you just have to push the single button on the right-hand side of the case. (Watch fans will know it as a "pusher," for reasons that are entirely self-explanatory: It's not a crown). You then pinch either side of the watch with your fingers, with a little bit of pressure, but not as hard as you would a battery tester. The subdial, which is normally used to track your steps, turns into a countdown timer, counting down 30 seconds for the test to complete.

Oh, and you need to have your arms resting on a table -- something that the tutorials don't currently make explicitly clear. In my original demo with the watch at CES, the test was conducted in mid-air and took just 20 seconds. Now, each test takes 30 seconds, which is then uploaded to your phone for analysis later, and can also be sent to your physician, should you desire.

If there's one thing, it's that using the ECG requires you to be constantly mindful of checking your heart rate. With a device that offers continuous or even interval-based heart-rate monitoring with an optical sensor, you don't need to think about it. Not to mention that you're more likely to be thinking about your heart when it's running faster, which could paint a skewed picture of your overall heart health. 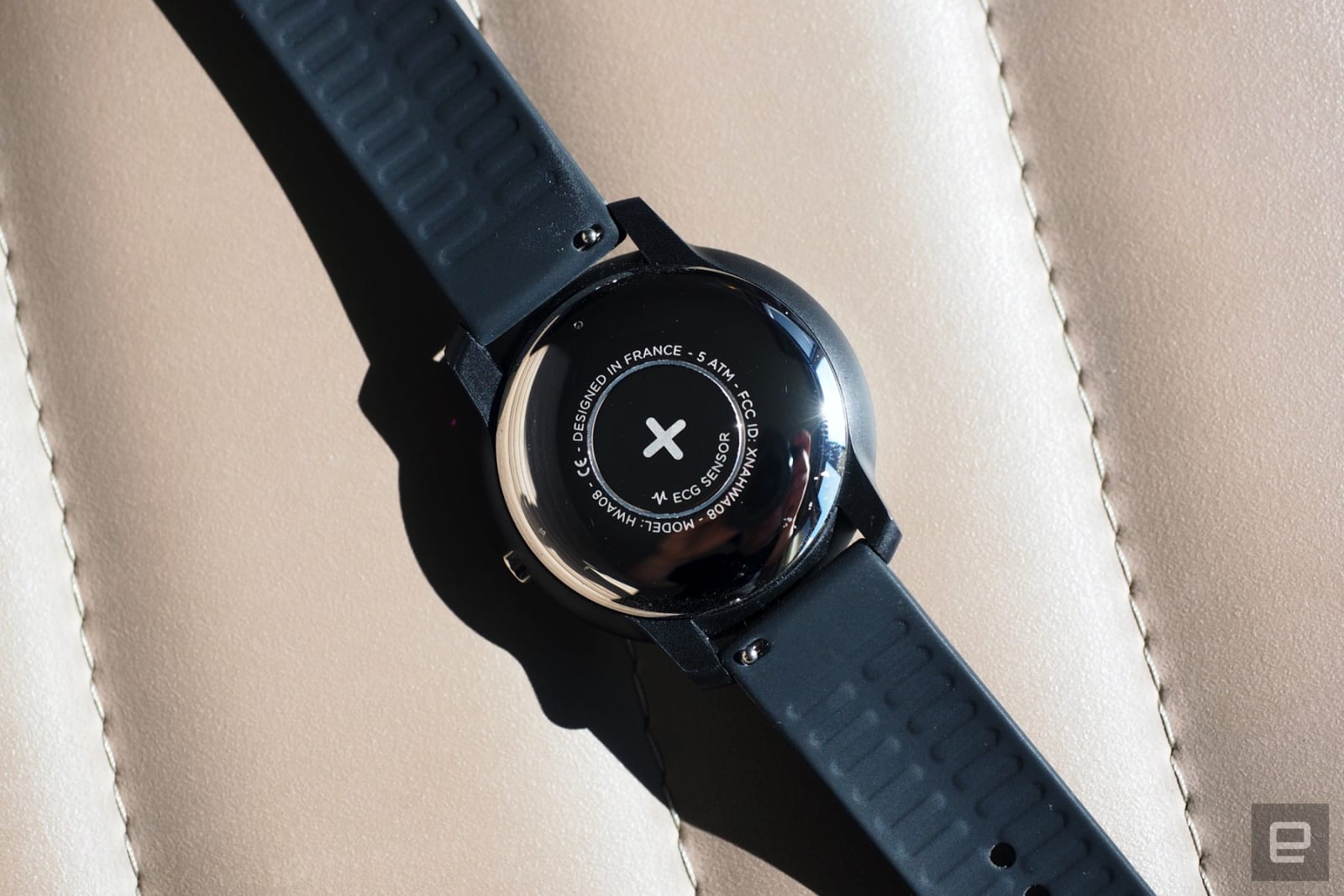 Because the Move ECG lacks a digital display, there's not much you can do with it beyond check the time and your step count. On one hand, it's a refreshing purity of form, especially since you don't need to do anything to check the time on your wrist. On the other, something like Garmin's Vivomove HR, with its hidden digital display, is a lot more functional.

Another annoyance is that the watch doesn't glow in the dark, or have any form of backlighting. It means that if you want to check the time in the dead of night, you'll have to reach for your phone. The lack of something so basic is an irritation, especially if you're averse to using alarm clocks or smartphones to check the time during a night-time rousing.

The things it lacks, however, does mean that Withings can boast of a battery life measured in the years. Or, at least, one year. The company says that on a single cell battery, you'll be able to run this for a year while taking two ECGs a day. It's an impressive claim, but one that we'll need to spend a little longer testing before we can be conclusive.

One thing that became instantly apparent is how tough the Move ECG is for counting steps, probably to avoid suggestions that it's a soft touch. My iPhone judged that I'd taken around 5,000 steps, but the Move felt it was closer to 3,500. That's a significant disparity and one that will need to be investigated further since I'm fairly sure I did more walking than that.

Naturally, I haven't mentioned Withings/Nokia/Withings Health Mate, the company's range-leading companion app. Aggregating all of your health data into one place, the information is easy to read and digest, with helpful graphs breaking down the state of your body. It's arguably the best fitness software available, and I can't recommend it enough. 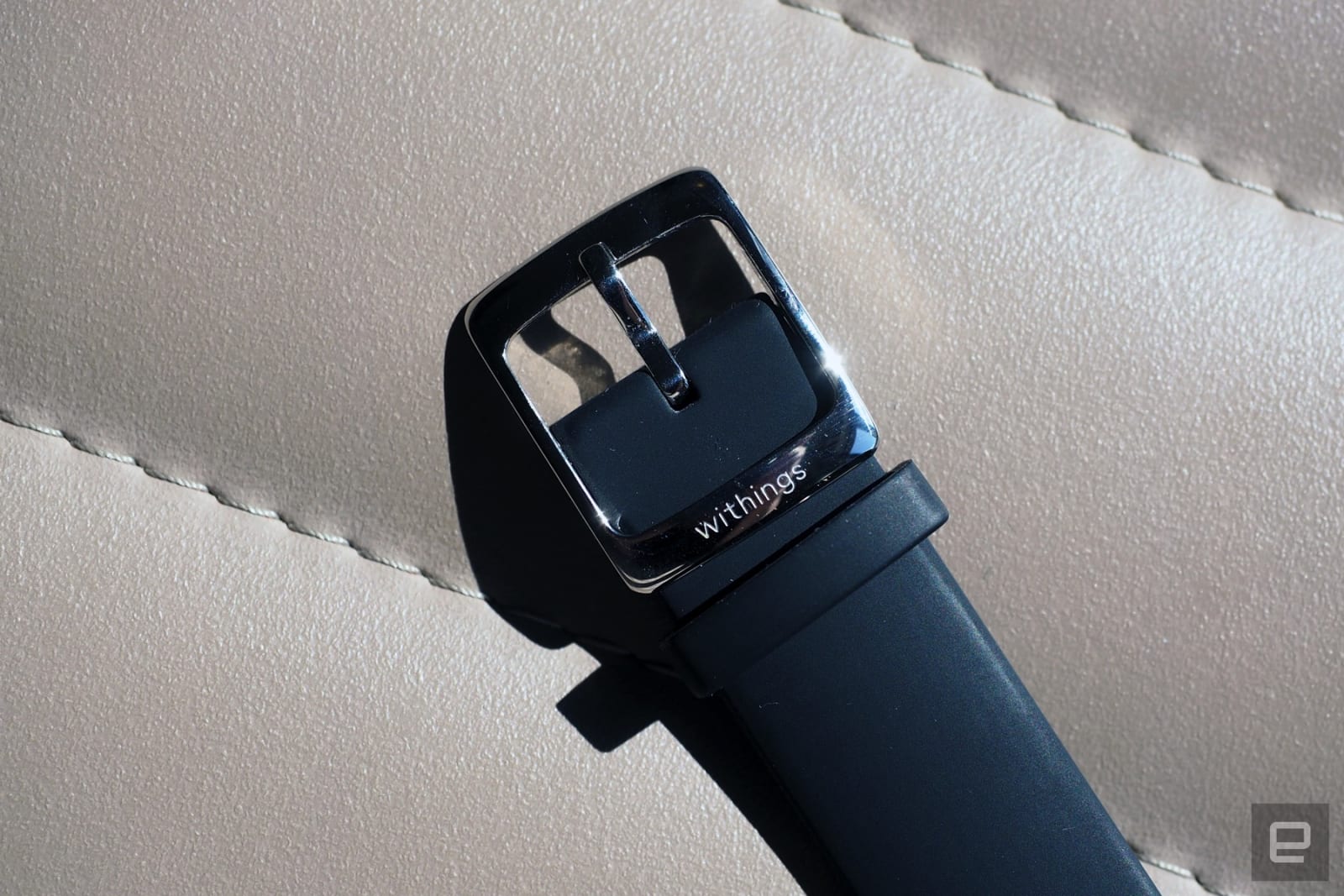 Withings is all about the sleep health, and so the Move ECG comes with both sleep tracking and a vibrating smart alarm. Like the Jawbones of old, if the watch detects that you're rousing shortly before your expected wake-up time, it'll buzz. If you're at the top of a sleep cycle, it's better to be roused then so you avoid feeling groggy a few minutes later.

For all of the things that could be labeled as slightly less impressive than expected, there's one place where it really does win. The Apple Watch Series 4, with ECG, sets you back $399 (£399), whereas the Move ECG costs €129.95 (£129.95). For a third of the price of an Apple Watch, you get a stylish hybrid fitness tracker with the same heart-checking capability.

There's still the tradeoff between having a constant heart-rate monitor versus the rare nature of an ECG. When you come to buy, you'll have to decide if you'd prefer a device that's always tracking the pattern of your heart, or one that'll give you better data, but only when you ask.

In Europe, it's available to buy today, but those in the US who are itching to try it will have to wait a little longer. The FDA is still yet to wave its scepter and bless the sale of the watch, which is expected to drop in Q4 of this year. Hopefully, it'll be available to buy before the end of the Holidays, just in time to keep you on track for your New Year's resolutions.