The first Braun speakers in 28 years are unexpectedly modern

When the news broke in July that Braun Audio's speaker line was making a comeback, pretty much everyone at Engadget was immediately hooked. Thanks to a deal with Proctor & Gamble, Pure Audio now has the rights to the iconic speaker name. While many of us expected a similar aesthetic to the Dieter Rams-designed devices from 1959, Pure is taking a decidedly modern approach with the revival of the LE line. They still have a minimalist look, but have been entirely redesigned both inside and out. This means that all the modern features are along for the ride. And it means the company is taking direct aim at Sonos.

The new speaker that most resembles those classic designs is the LE03. That's pretty much because it's square. It can also be mounted on a stand (either floor or tabletop) in a similar fashion to those previous speakers (in fact, the whole lineup can). And here is where the similarities end, at least design-wise. The larger LE01 and LE02 units are both rectangular, and can be used in either horizontal or vertical orientations. All three have rounded corners where the Rams designs were unabashedly boxy. There is a minimalist look to them, save for the LED indicators in the top right corner of each. The new LE line is also wrapped in an aluminum frame for both the black and white color options. These are meant to be "eye-catching without being intrusive," and for the most part Pure succeeds.

Like Sonos gear (well, until this week), the new Braun LE speakers are wireless, but they're not portable. They have to remain plugged in for you to use them. In terms of connectivity, Bluetooth 4.2 with AAC and WiFi are both on board. The latter allows you to use handy features like AirPlay 2, Chromecast built-in and Spotify Connect to beam music, podcasts and more to each of these speakers. WiFi also enables these to be used as a multiroom solution, which you can manage through Braun's software or with the Google Home app.

Voice control is part of the features list as well, as Google Assistant is here to handle your spoken commands and queries. An array of four beam-forming microphones handle both far-field voice recognition and acoustic echo cancellation. All of these wireless connectivity features are available on all three speakers, so you aren't forced to settle for a certain size if you want voice control and other tools.

While there is a Braun app for setup, control and tweaking EQ settings, each of the LE speakers has physical controls as well. There are buttons for actions, play/pause, skipping tracks, volume and Bluetooth pairing. Like many smart speakers these days, there's also a dedicated control for turning off the microphones. When they're disabled, the otherwise white LEDs on the front turn orange, as does the mute button itself. This way you know at a glance if the speaker is listening for your cues. Around back, there's a 3.5mm aux jack if you need to make use of a wired connection. 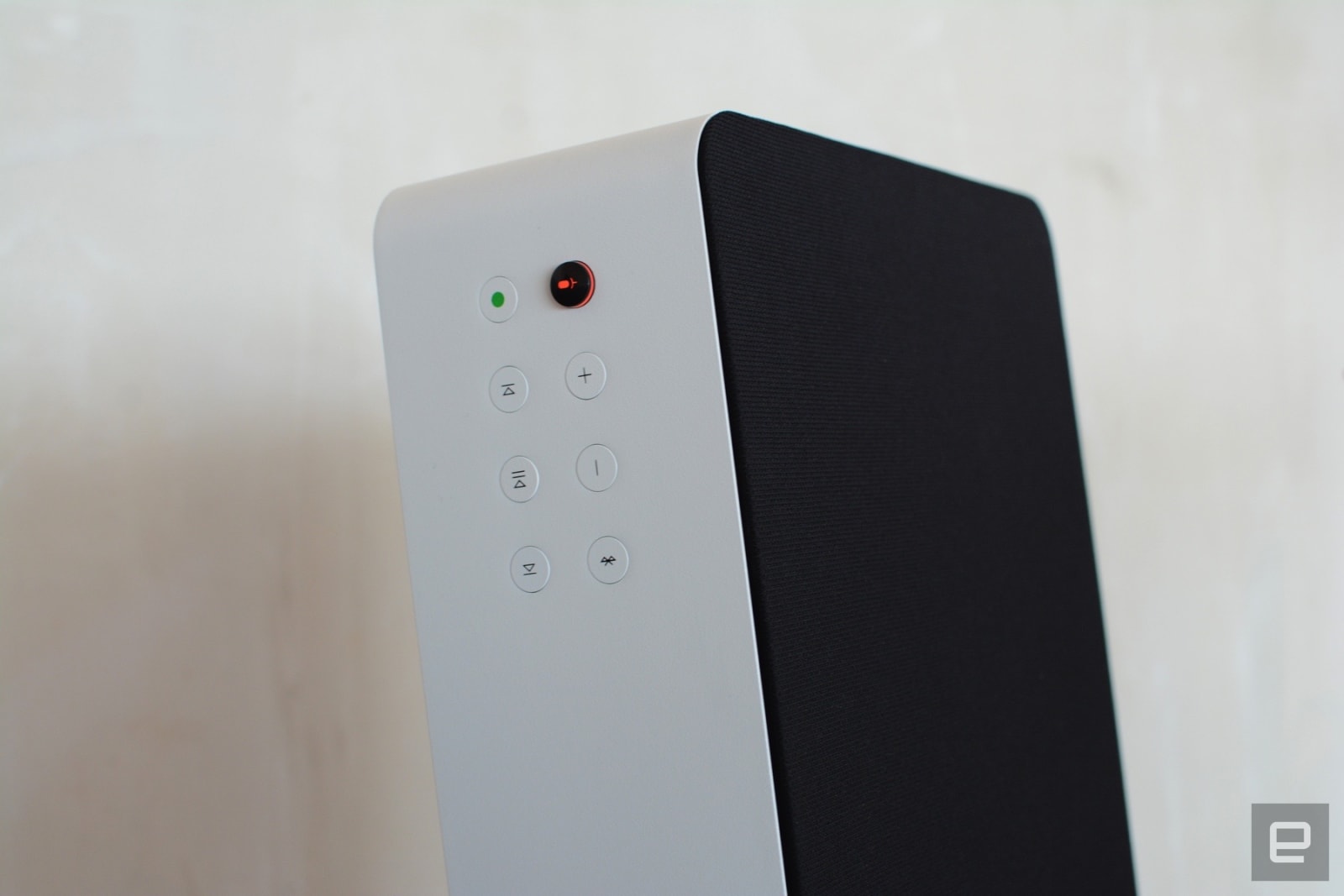 The main difference between the three units is both size and power. At the top with the pricey LE01, two 5.25-inch aluminum cone woofers, three 2.5-inch radiator drive units, two quadratic 8 x 4.5 inch passive bass radiators and three class-D power amplifiers. With the smallest speaker, the LE03, there's basically one of each of those, and the mid-size LE02 is in between the two. A 32-bit ARM multi-core digital signal processor is on all three models to help with "high accuracy and low noise," and the trio is capable of 96kHz/24-bit audio streaming. If you want to buy two of any of these models, you can use them as a stereo pair with dedicated left and right channels.

The demo room here at IFA was set up in a mostly concrete loft, so it wasn't ideal for making any final judgements on overall sound quality due to the echo. However, based on a few minutes of listening time, I can tell you the audio on the new LE series is very crisp and clear. In fact, I was pleasantly surprised by the clarity. Instruments all stand on their own without being condensed down to a single blob of sound. And because of that, there's dimensionality to the audio that a lot of wireless multiroom speakers don't do well. The Braun LE series also has nice bass for standalone speakers -- the radiators for the low-end tone do their job well. Overall, the revival of Braun Audio makes a good first impression, but it's too early to say if they outperform Sonos without further testing. And I'm sure a lot of people won't be happy with the updated design.