More immersive sound is nearly ready for your phone.

Back at CES, Sony unveiled 360 Reality Audio, a new standard/format/ecosystem for immersive sound on headphones and speakers. The headphone demo at CES was very technical and quite sensitive as calibrating sound profiles to your ears required a thin wire underneath some studio-grade cans. The company was clear in January that the goal would be for anyone to do the calibration with their phone, by taking a picture of their ears. At IFA, Sony is showing off how that feature will work inside its current Headphones app.

The Sony Headphones app is already the place you adjust noise cancellation, tweak the EQ and make other changes to its line of audio gear. It was nice to see the company will most likely put this 360 Reality Audio calibration tool inside that app. I have enough things one my phone, and I'm glad I won't have to add another app for the sole purpose this one-time setup. 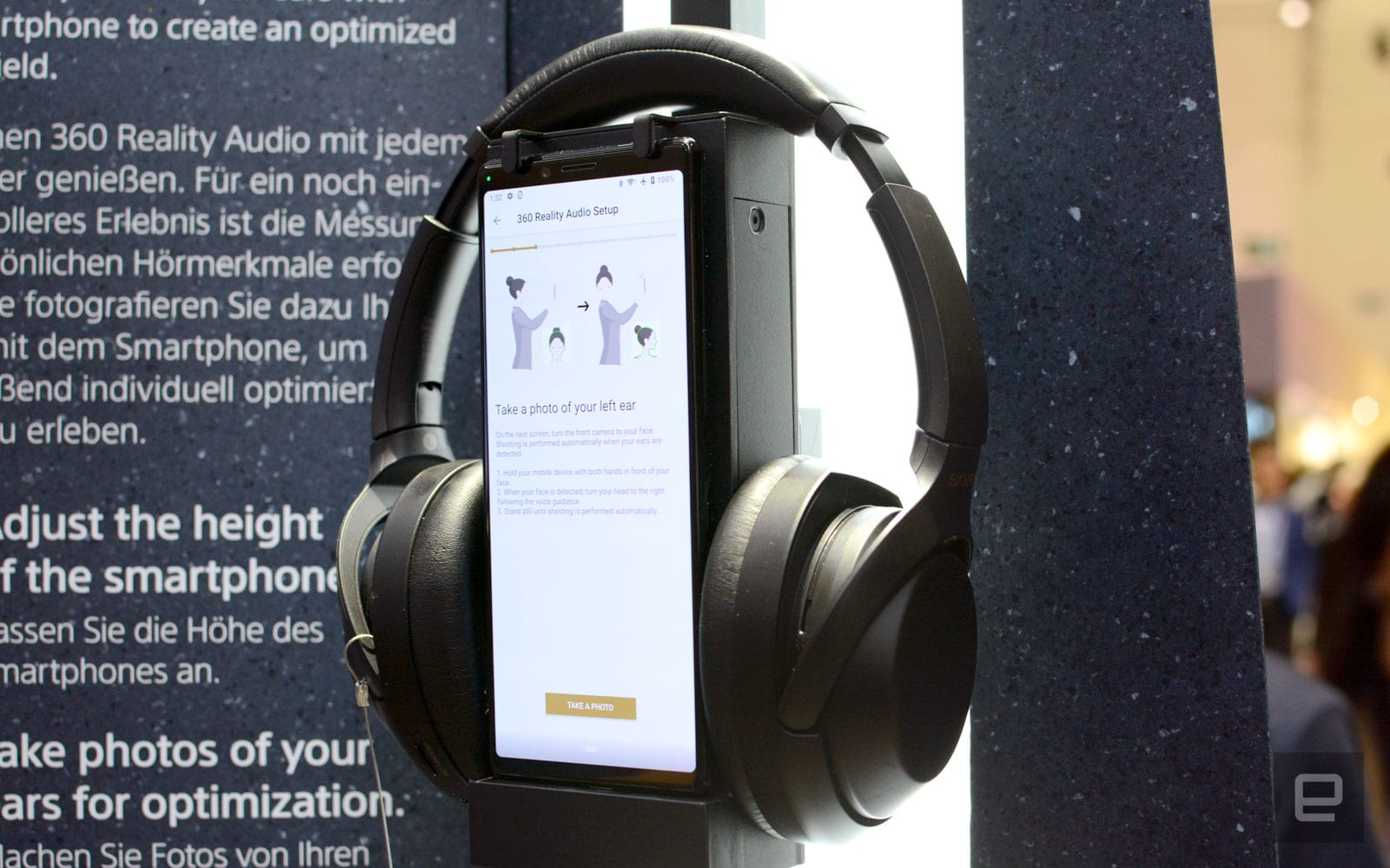 Once you select the 360 Reality Audio Setup, the Headphones app will walk you through the process. This includes asking you to make sure your ears aren't covered by hair, remove earrings and, of course, remove your headphones. Next, you have to take the photos. The app will recognize your face to make sure you're holding your phone the appropriate distance away. Then you simply turn your head to the right to capture your left ear before repeating the process for the right. The app will automatically detect when you're in position and capture the image. If it doesn't, there's a manual option so you can snap a photo yourself. The whole thing is a bit like taking a selfie, but it can be difficult to get the distance and angle right, even if the phone is mounted stationary -- like it was on the show floor.

When all the photos are done, the app analyzes the shape of your ears to create a sound profile. That process can take up to 30 seconds, but the few times I tried it, the software was much faster. Once complete, the Headphones app will send the results to a music app to "optimize your 360 Reality Audio experience." Since the whole thing is still new, so right now that means booting you out to Sony's own media player where there's a selection of curated 360 Reality Audio tracks. For the demo, you had the option to switch back and forth between stereo and this immersive format. But it was only for one song and not for any of the material from the likes of LSD or Khalid.

There is a massive difference between 360 Reality Audio and normal stereo. It's like the difference between stereo and Dolby Atmos in your living room, or digital and analog instruments. It's much more immersive, making it seem like you're inside the music, rather than just having it blasted into your eardrums. Sony was doing this demo with its stellar WH-1000XM3 headphones, a $350 set that's the best noise-canceling option you can buy right now. Even though those headphones are great, they're even better with 360 Reality Audio. 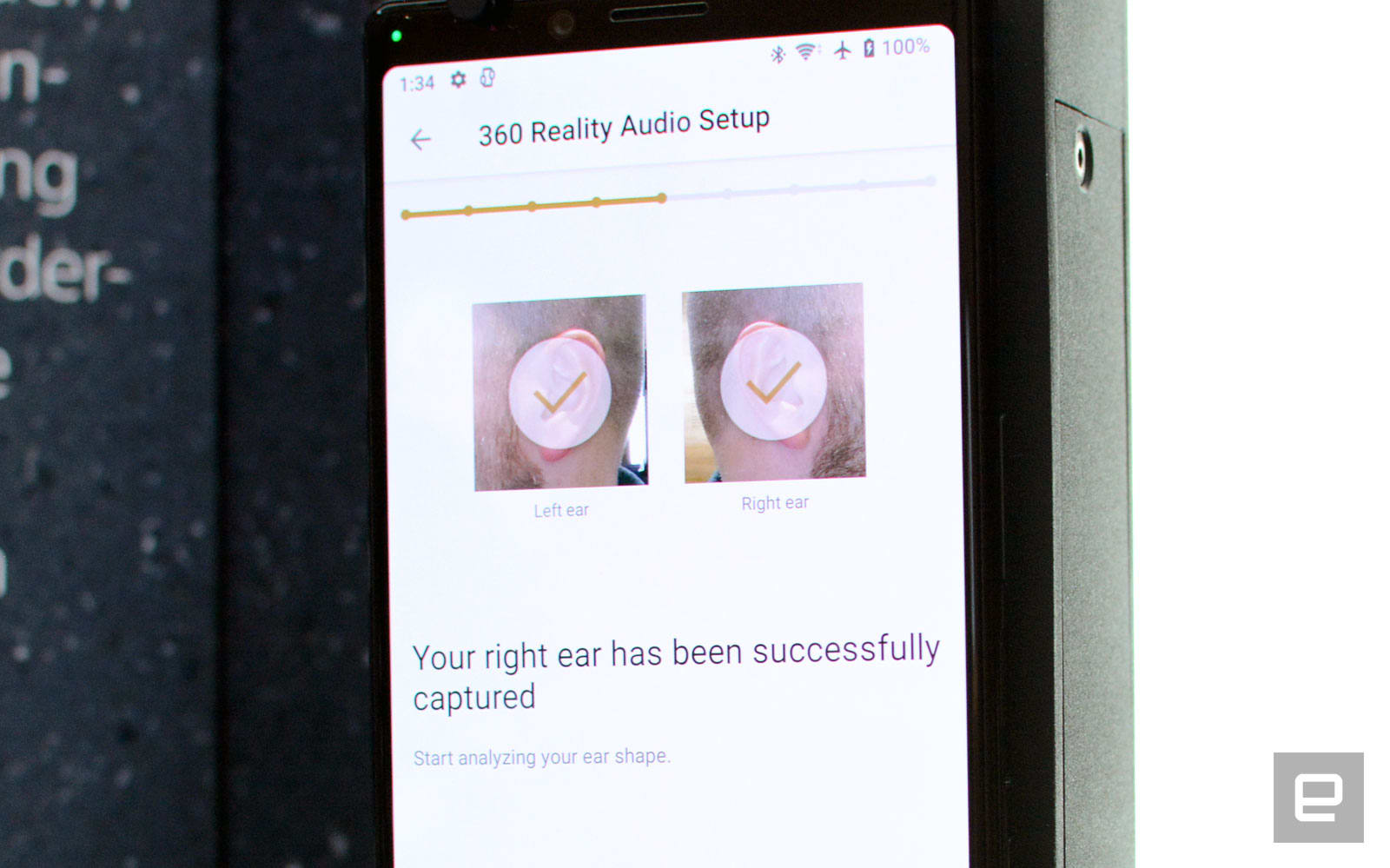 The one element of all this that I'm unsure of is just how much the photo/calibration process tailors things to your ears. I tried the immersive tracks and stereo sample with the previous attendee's settings before going through the process myself. Obviously, the whole thing takes a couple of minutes, and I wasn't able to flip back and forth. All in all, I couldn't really tell a difference between the two profiles. Who knows, we could've had similar ears. Sony reps didn't offer any info on what's going under the hood during the analysis, which isn't really surprising -- just that the app is creating an audio profile specific to your ear shape.

While I'll have to wait until the feature is ready for mass consumption to really put it to the test, having 360 Reality Audio content to use it with is the next hurdle. At CES, Sony said it working major labels and distribution services, and any existing music recorded in a multi-track format could be easily converted. Still, it's unclear if you'll have to pay extra for it, if this will be exclusive to artists on Sony's stable of record labels or even when you'll be able to access it. The good news is that whenever the time comes, the calibration part of the equation will arrive as an update to an existing app.

All products recommended by Engadget are selected by our editorial team, independent of our parent company. Some of our stories include affiliate links. If you buy something through one of these links, we may earn an affiliate commission. All prices are correct at the time of publishing.
View All Comments
Sony’s headphone app will soon analyze your ears for 360 audio