...but I'm tempering expectations until it's ready for prime time.

Sony's CES press conference didn't offer many surprises, aside from a lot of discussion around Spider-Man: Into the Spider-Verse and a cameo by Pharrell Williams. The singer and producer was on stage to discuss the company's biggest announcement during the brief evening event: 360 Reality Audio. With this project, Sony is taking high-resolution music to another level by adding a spatial dimension. The goal here is to create something that "makes listeners feel as if they are immersed in sound from all directions." Or to put it another way, to make you feel like you're at a concert any time you listen to music. To do so, the "experience" depends on a lot of things lining up.

First, there's the music creation and recording side. Sony says it's already working major labels and distribution services, providing the technology necessary to build an ecosystem around this new 360 Reality Audio. As you might expect, this includes the creation, distribution and playback of the content. Speaking of content, MPEG-H 3D Audio is the format here, which allows vocals, instruments and other sounds to be placed around the listener. After two demos on the show floor, I can definitely say it sounds like you're inside the music -- in a good way. Sony is working with Fraunhofer IIS on 360 Reality Audio, a name that should sound familiar. Fraunhofer IIS also worked with Senneheiser on its Ambeo 3D audio soundbar.

So what about older music? Sony is accounting for that as well. Music that's recorded in a multi-track format can be converted to 360 Reality Audio. This means that albums that are already out can be tweaked to take advantage of the immersive sound mapping and positional info. Sony plans to bring 360 Reality Audio to streaming services, including Deezer and Tidal -- two subscriptions that offer high-resolution audio options already. 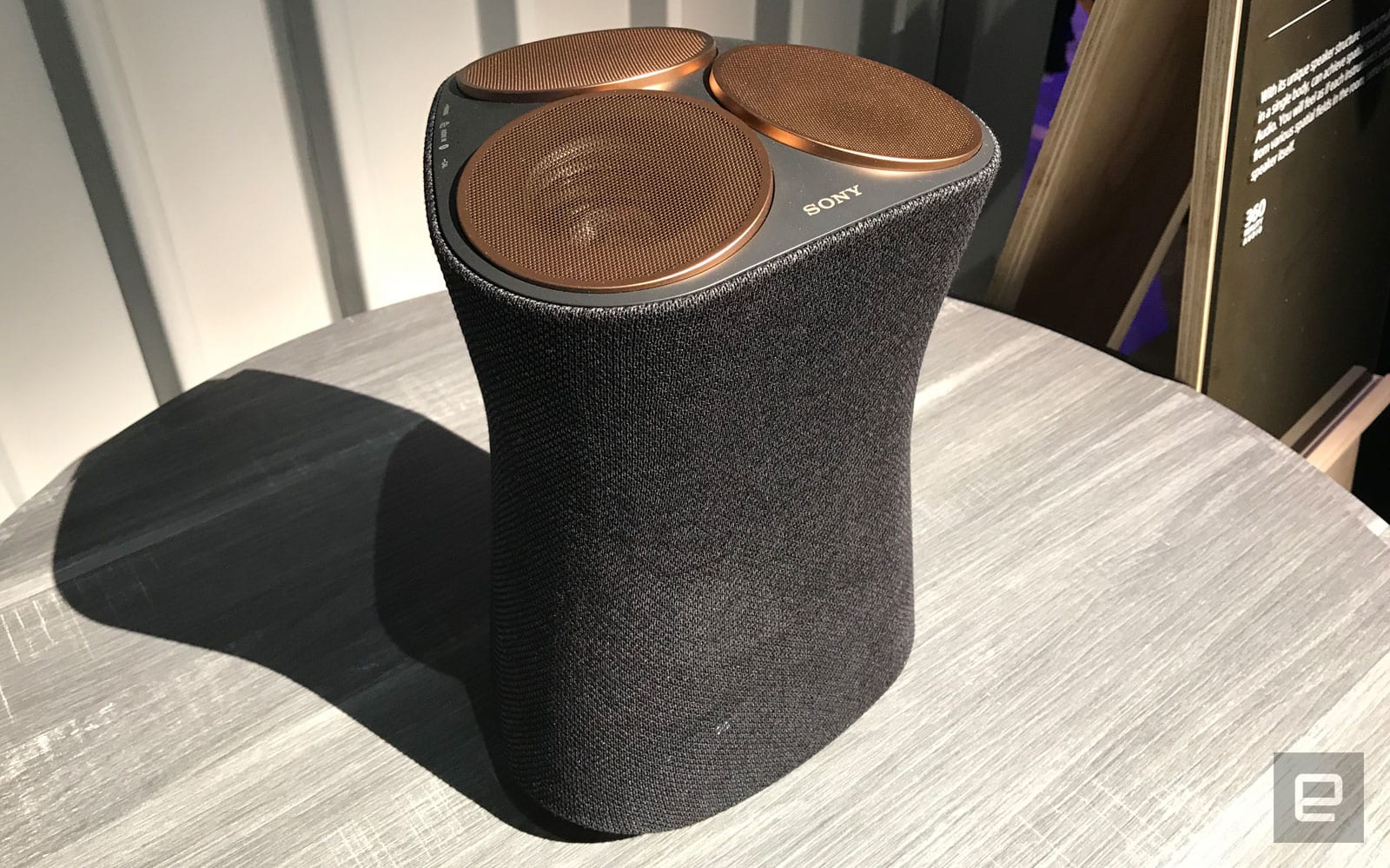 On the consumer side, Sony is exploring support for a wide range of devices, but at first, the focus will be the company's own headphones and speakers. In fact, Sony is showing off a prototype of a 360 Reality Audio speaker here at CES. Details are scarce, but we do know it packs multiple speakers into a single enclosure. Right now, it's just a reference device meant to show off the audio -- there are no plans to sell it, according Sony representatives at the booth. However, it looks very much like a finished product, with details like on-board controls, so it wouldn't surprise me if it was made available in the future. The speaker makes the audio sound like it's coming from various locations around a room rather than directly in front or slightly to the sides like it normally would. It's hard to tell what's behind that cloth exterior, but there are three speakers visible on the top, firing upward at slight angles.

Sony offered an audio demo of the prototype speaker, but the environment was less than ideal. In a semi-enclosed room, I heard audio samples in both conventional stereo and 360 Reality Audio albeit with some trade show noise in the background. I could certainly tell a huge difference, with the latter sounding like it was coming from all directions. It was so compelling, I looked around the room for any spots Sony could've hidden speakers. Thankfully, I didn't see any.

I do have some concerns about how the final setup will work. Most notably, this fancy speaker was set in the middle of a large table, not in a corner or near a television. If the device needs that much free space to operate, it won't be a great option for people with limited space in the living room. It sounds good, but for me, 360 Reality Audio is more compelling for headphones in its current state. What's more, Sony explains that any speaker system that can blast sound in all directions could be capable of handling 360 Reality Audio when it's ready for mass consumption.

Sony says you won't need a dedicated device to listen to the 3D audio, but you will need to use an app it's currently working on to measure your hearing. To do this, the smartphone software will allow you to take a picture of your ear so the audio can be tailored to you based on an analysis of your hearing. Basically, you'll snap some photos and Sony's app will ensure the 3D Reality Audio will be optimized for you. You'll only have to do this once, and it sounds like it will eventually be pretty simple, but Sony's CES demo was a lot more involved. 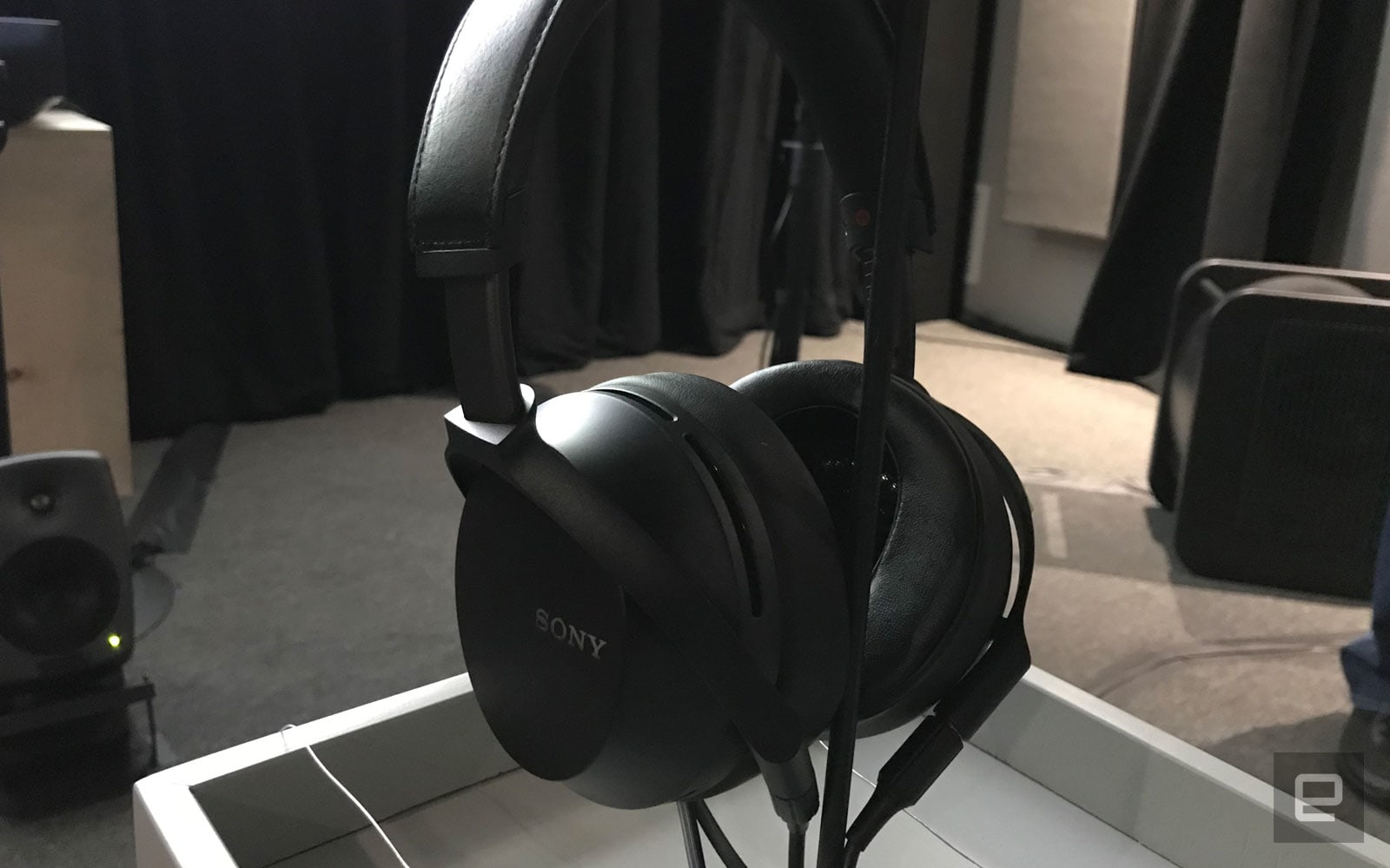 In a tightly controlled room, Sony representatives first played some audio samples over a system of speakers positioned around the space. Those tracks already included the spatial component, delivering music in what was basically a 13-channel surround sound system. Then we moved on to headphones. For the sake of the demo, the hearing analysis was done with very sensitive wire microphones inserted in my ears before I put on a pair of audiophile-grade MDR-Z7M2 headphones. The same audio samples were played again, and to be completely honest, I had a hard time telling the difference between the two. It's worth noting there's no head tracking at work here, but the 3D sound is big, booming and noticeably more immersive than what I'm used to from Spotify and other sources.

It's easy to impress with a well-planned demo that pumps carefully created audio files through $900 headphones, so it will be interesting to see what 360 Reality Audio sounds like when it's available for public consumption. The potential is certainly interesting, but until we know more about cost and overall availability, it's hard to get too excited. However, based on what we heard here at CES, Sony could very well be onto something.

All products recommended by Engadget are selected by our editorial team, independent of our parent company. Some of our stories include affiliate links. If you buy something through one of these links, we may earn an affiliate commission. All prices are correct at the time of publishing.
I want Sony's 360 Reality Audio to be the future of music
360realityaudio
audio
av
ces2019
deezer
entertainment
gear
hands-on
sony
tidal