Volkswagen takes the wraps off the production-ready ID.3 EV

It's the first production EV based on VW's MEB platform.

After announcing the MEB modular electric-car platform at CES in 2016 on the heels of Dieselgate, the automaker went on a tear announcing a microbus, dune buggy, crossovers and other vehicle types that would run on electrons instead of gasoline. Finally, we're seeing the first production vehicle that'll be part of the automaker's future.

The vehicle will come in three range flavors all based on the European WLTP standard: Short range (205 miles), midrange (261 miles), and long-range (342 miles). They'll get that longevity on the road from 45, 58, and 77kWh battery packs respectively.

The automaker noted that the vehicles will support 100kW charging which will add roughly 180 miles (using the WLTP standard) in about 30 minutes. Sadly we won't have EPA range numbers anytime soon because Volkswagen won't be bringing the ID.3 to the United States anytime soon.

The interior of the vehicle includes a brand new infotainment system and very few actual buttons. There are just a few below the display and on the steering wheel. In addition to a new voice assistant (Hey ID), the ID.3 will also ship with AR in the heads up display. It's similar to what we've seen on with Mercedes MBUX, except on the Volkswagen, the arrows will be directly in the HUD.

For our European colleagues and friends, the lowest-priced variant will start at €30,000. If you're keen for an ID.3, get in line. Pre-orders for the vehicle started back in May. 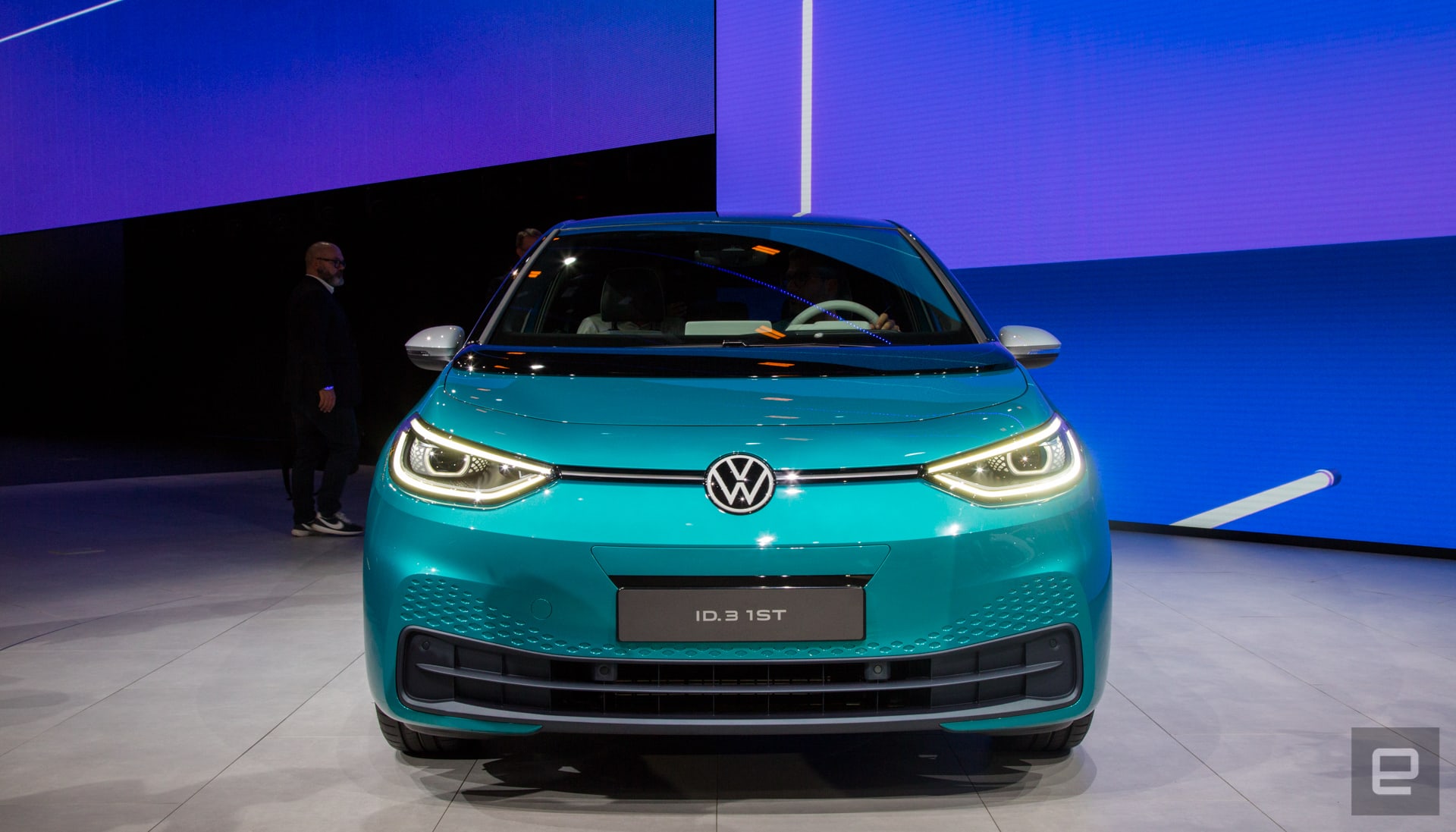 But if you do happen to throw down the €1,000 deposit on one, you'll get yourself a special ID.3 1st variant with limited-edition colors, two-tone paint jobs, sunroofs and other special options based on whatever trim level a customer chooses. Plus, ID.3 1st owners will get 2,000 kilowatt-hours of free charging. For the midrange version, that's about 39 charges from zero. Though it's unlikely most of those charges will be initiated from a completely dead battery. Also, most of the charging for these vehicles will be at the home of their owners.

The MEB platform will eventually extend beyond Volkswagen to the rest of the VW Group including Audi and Porsche. For now, those automakers are using pre-MEB platforms like J1 which is shared by the Porsche Taycan and Audi E-Tron GT. As production of MEB ramps up, not only will subsidiaries of the group use it, but also Ford and smaller niche automakers for things like the Buggy.

The ID.3 will go into production by the end of the year and will start showing up in European showrooms in mid-2020. Volkswagen guarantees the battery pack for 160,000 kilometers (99,500 miles) or eight years. 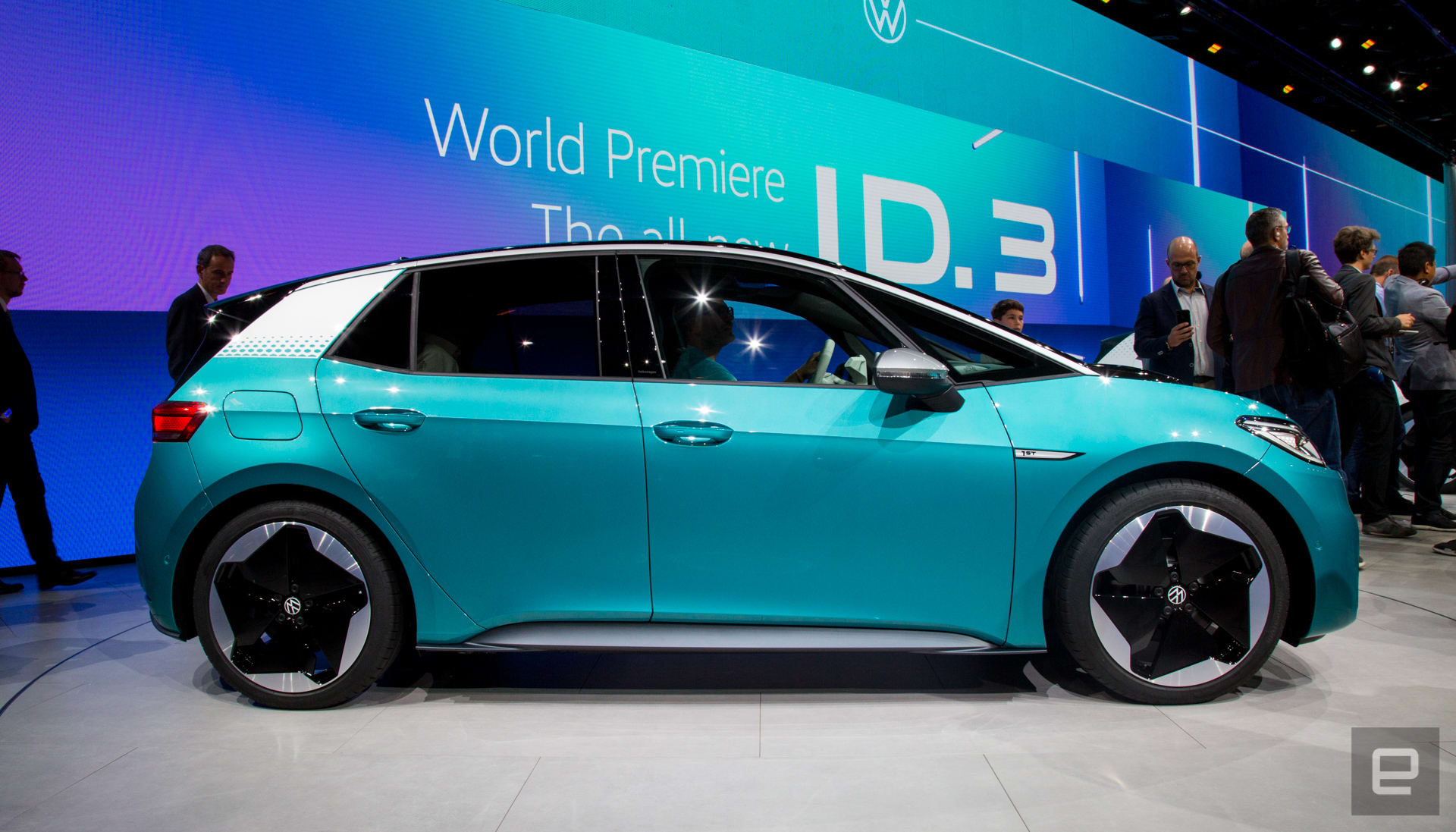 While we pine for the Golf inspired ID.3 in the United States, we can take comfort in the fact that the ID Crozz will be the first MEB-platform VW landing our shores first, sometime in 2020. It makes sense when you look at the market share of SUVs in the US. Still, here's hoping the ID.3 will eventually show up in the states.