A taste of what's to come with the ID.4.

While the exterior of a car is important (no one wants to drive an ugly car), the interior is where you spend most of your time. While the powertrain (electric) and design (a smoother Golf) of the ID.3 are what people initially think of when they see the car, that brand new infotainment system and layout are worth a look. So I went and looked at it.

It's important to note (once again) that the ID.3 is not coming to the United States (boo). But, the layout we're seeing in this car will more than likely end up in the ID.4. Or at least a very close variant of it will show up stateside. Either way, Volkswagen has produced a clean, easy to use and more importantly, easy to understand system that should offer up what people care about the most while driving.

When you sit down in the ID.3, its infotainment system exudes clean design. Most of that has to do with the white background and floating displays. The center display is a 10-inch touchscreen that floats above the dashboard.

Two home screens contain the features users will use most while a third has a tablet-like layout of all the options available. Navigation was mostly quick with very little latency. There were a few moments when the system didn't respond to taps or swipes. Chances are that's more of an issue with it being pre-production than anything. 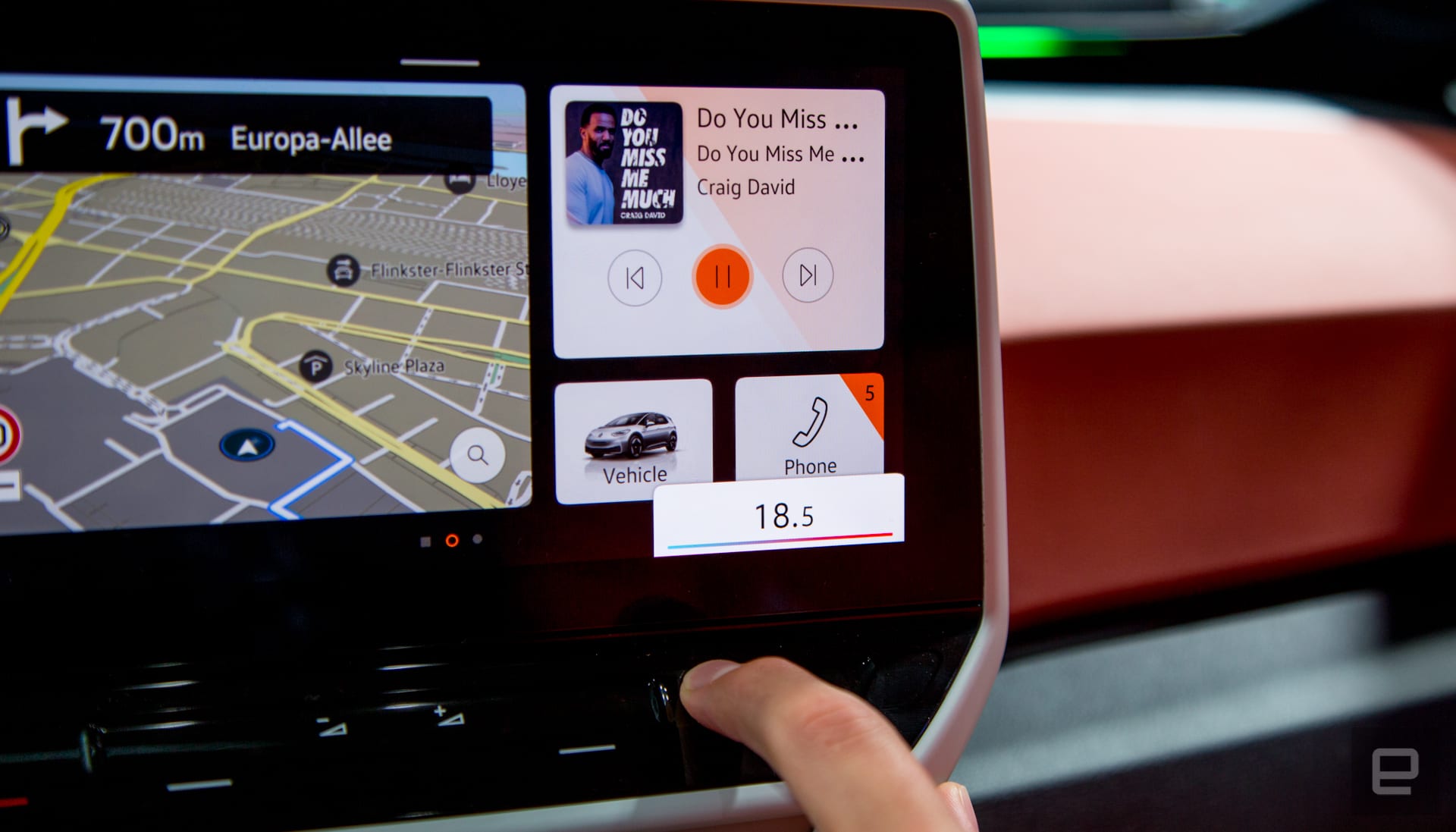 Under the display are simple climate controls with touch-sensitive buttons. Users can tap to raise or lower the temperature or tap and hold and move their finger left or right to adjust the heat or cooling. There are tiny ridges at the end of the "buttons" so that should help when you want to cool the car down without having to take your eyes off the road.

More robust controls are in the touch display. But in addition to the usual hot, cold, fan speed etcetera, Volkswagen added more conversational-type controls like "cool feet" or "warm hands." It's a nice touch and shows that automakers are closer to understanding how actual humans think.

To that effect, the automaker is also adding a voice assistant. The "Hey ID" wake word offers up access to navigation, climate control, media and other features. Two mics in the ceiling of the car help the system determine who is talking so if the passenger says they're too hot, it'll only adjust their temperature. 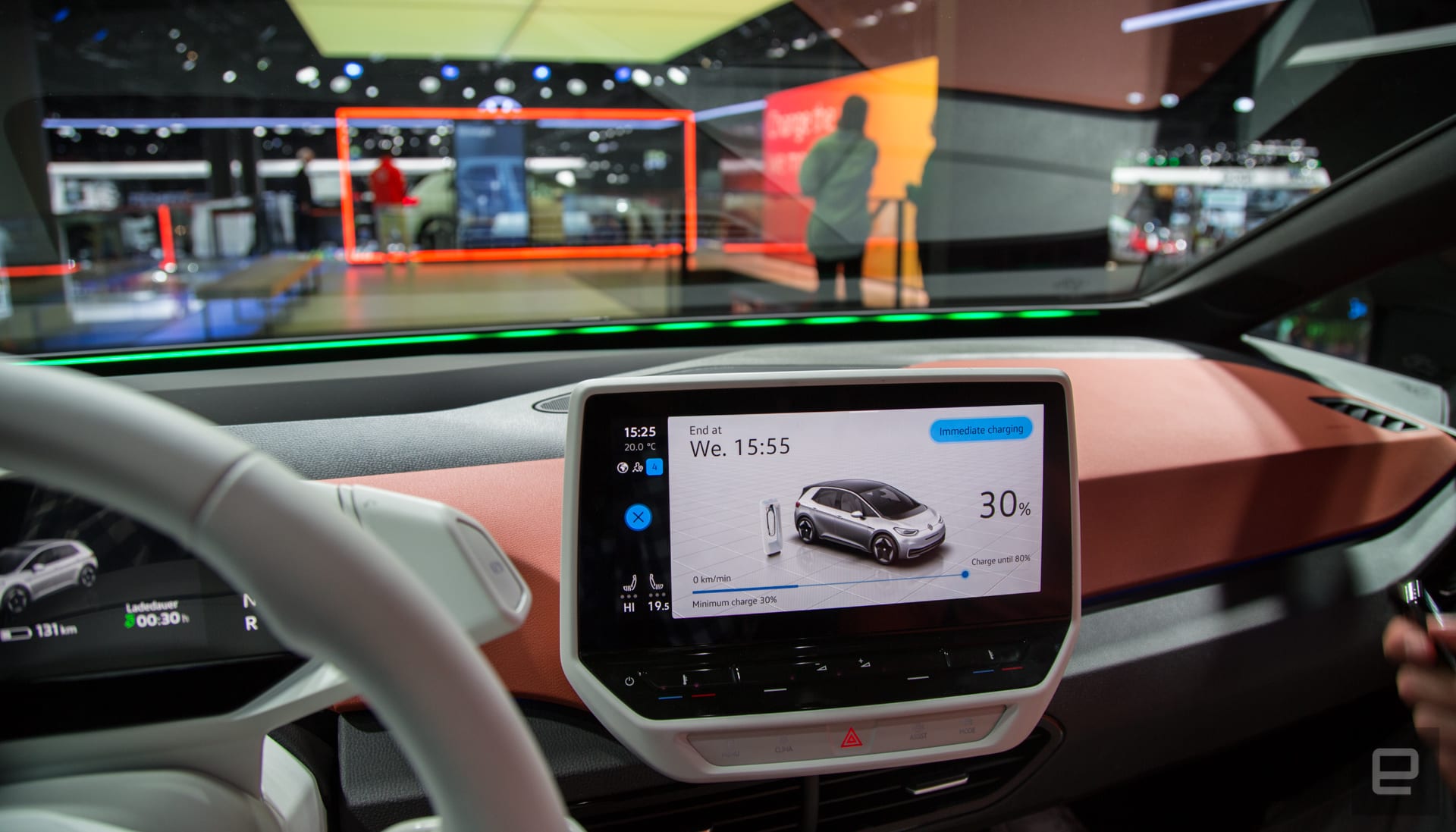 One interesting aspect that's not on other cars is the ID Light which is essentially an LED strip that's positioned right below the windshield. It can help with navigation by telling you when to turn, give you charging status and flash red when you need to apply the brakes. As drivers get used to it, I can see it being a useful way to share simple (but sometimes vital) information without the driver taking their eyes off the road.

Meanwhile, behind the actual wheel, Volkswagen is using touch-sensitive buttons on the steering wheel for ADAS and media controls. With the controls on the right, you can adjust the view of the dash cluster. Swiping left and right toggles between either navigation, speed or ADAS being enlarged. While the speedometer is always visible, ADAS and navigation can be swiped away.

On the left side of the steering wheel, driving modes can be selected with a quick swipe. As someone that changes driving modes quite a lot while cruising around, this is a far better solution than a button in the center console or on the dash. 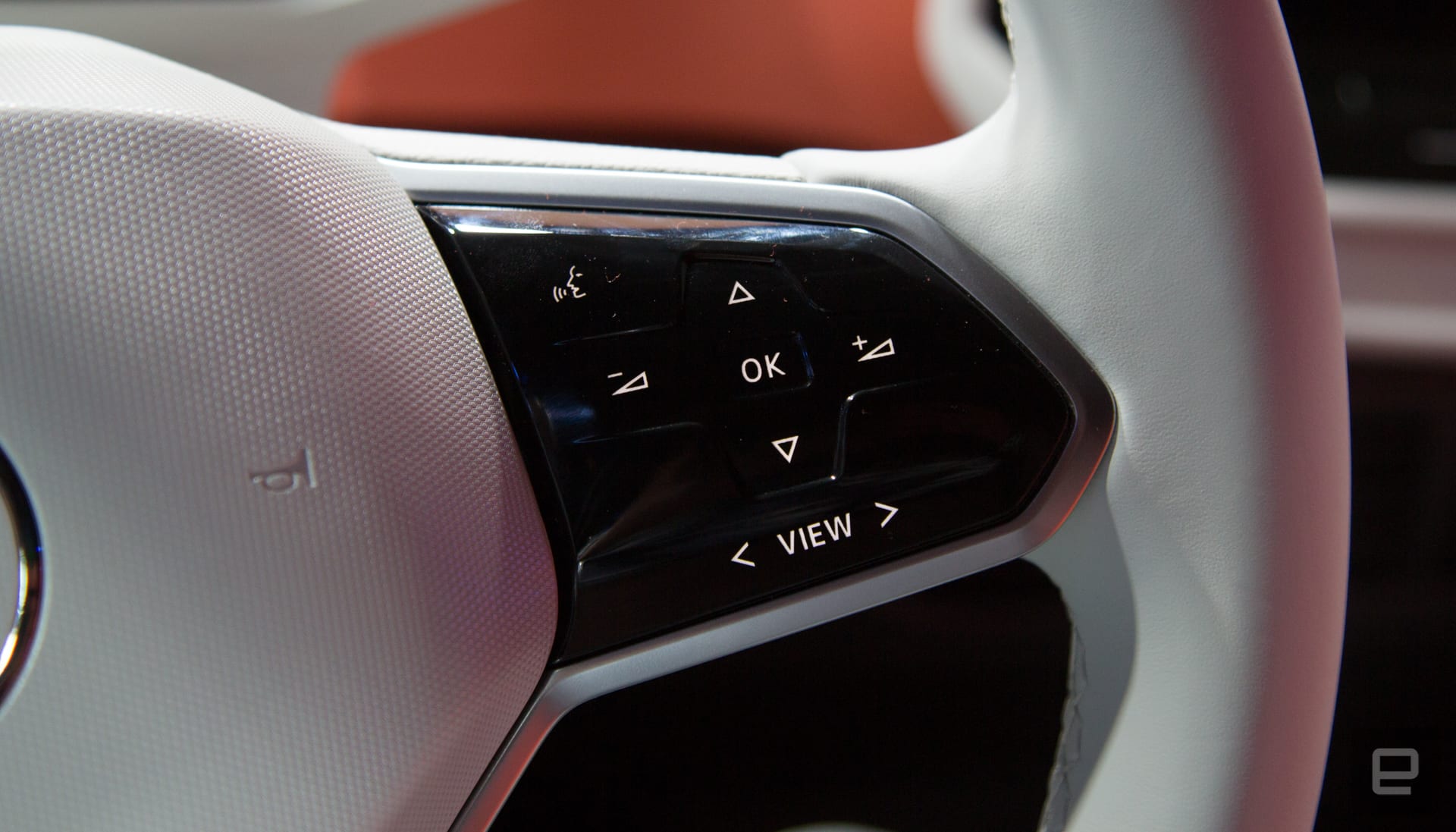 While the touch-sensitive controls are cool in theory, it'll be interesting to try them out on the road. Without any real physical feedback from your actions on the steering wheel, it might not be as innovative as VW hopes it will be.

Overall though, the interior of the ID.3 is quite spacious for a car its size and I had no trouble fitting into the back seat while others were in the front. Like the display, it feels light and airy in the car and presents itself interior-wise as a larger vehicle.

Again, it's important to point out that we will not be getting this car in the US. But it's the first MEB platform vehicle from Volkswagen and what happens here will permeate the rest of the coming line up. But for now, we'll wait for the ID.4 which should be available in the US in 2020.

All products recommended by Engadget are selected by our editorial team, independent of our parent company. Some of our stories include affiliate links. If you buy something through one of these links, we may earn an affiliate commission. All prices are correct at the time of publishing.
Inside Volkswagen's all-electric ID.3
business
frankfurtmotorshow2019
gadgetry
gadgets
gear
green
id3
infotainment system
mobile
personal computing
personalcomputing
transportation
volkswagen
volkswagen id3