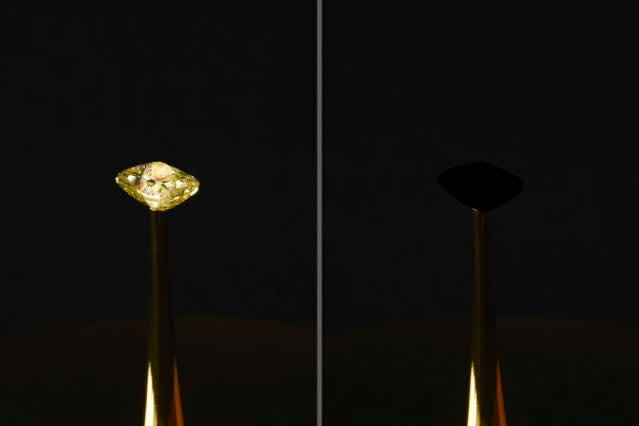 Good news for goths -- black somehow just got even blacker. MIT engineers have cooked up a material that's 10 times blacker than anything else previously reported. Capturing more than 99.995 percent of any incoming light, the material is made of vertically aligned carbon nanotubes (CNTs) grown on chlorine-etched aluminium foil. And it was discovered by accident.

The researchers had actually been experimenting with ways to grow CNTs on electrically conductive materials -- such as aluminium -- to boost their electrical and thermal properties. The color of the resulting material surprised the team, and they only realized what they had invented after they measured its optical reflectance.

The discovery is currently being showcased at an art exhibit titled "The Redemption of Vanity" at the New York Stock Exchange, where a 16.78-carat natural yellow diamond has been coated in the material. Instead of a brilliant, sparkling gem, the stone -- which is worth an eye-watering $2 million -- appears as a flat, black void.

However, the team says the material has practical applications, too. According to Brian Wardle, professor of aeronautics and astronautics at MIT, it could be used in optical blinders that reduce unwanted glare, to help space telescopes spot orbiting exoplanets. And, he says, the material could get even blacker still.

Before MIT developed what it called the "blackest black" material to date, Surrey NanoSystems claimed that title with its original Vantablack low-temperature carbon nanotube discovery. Surrey's material was capable of absorbing 99.96 percent of light, although its scientists claim the company's second generation concept could be even darker than that (even if spectrometers can't apparently measure it). That hasn't stopped BMW coating one of its cars in it, though.

"There are optical and space science applications for very black materials, and of course, artists have been interested in black, going back well before the Renaissance," Wardle says. "Our material is 10 times blacker than anything that's ever been reported, but I think the blackest black is a constantly moving target. Someone will find a blacker material, and eventually we'll understand all the underlying mechanisms, and will be able to properly engineer the ultimate black."

Update: 09/13/19 9:17am ET - This article has been updated to clarify absorption properties of MIT's discovery and a separate material called Vantablack.

In this article: art, black, blackest, carbon nanotubes, design, gadgetry, gadgets, material, MIT, telescopes, tomorrow
All products recommended by Engadget are selected by our editorial team, independent of our parent company. Some of our stories include affiliate links. If you buy something through one of these links, we may earn an affiliate commission.