In many ways, it’s better than Nintendo's Pro Controller.

I think Nintendo's official Switch Pro Controller is brilliant. It's a full-size pad with large face buttons, textured handles and a transparent shell that reveals a circuit-inspired pattern underneath. The accessory isn't without its faults, though. The D-Pad, while a huge improvement over the left Joy-Con, is a bit stiff and spongy for my tastes. I also dislike the digital triggers, which barely depress, and the seriously steep $70 asking price.

The Switch has many third-party controllers to choose from, but none of them have impressed me like the 8BitDo SN30 Pro+. Terrible name aside, it's an almost perfect pad that works not only with Nintendo's hybrid console but Windows, macOS, Android and Raspberry Pi too.

Let's start with the hardware. 8BitDo has rightfully earned a reputation for building modern, high quality controllers that ape those released for classic systems such as the NES and Sega Genesis. The SN30 Pro+ is clearly based on the iconic SNES controller, with a cross-shaped D-pad on the left, oblong start and select buttons in the middle, and circular A, B, X and Y inputs on the right-hand side. The "dogbone" design has been enhanced, however, with handles, analog sticks and two additional buttons -- with a star and 8BitDo logo respectively -- that, by default, act as the Home and Share shortcuts on the Switch.

It's a stylish look that deftly balances Nintendo's heritage with modern video game sensibilities. The controller also comes in three kickass color schemes: matte black, a SNES-themed grey and lavender, and a Gameboy-inspired cream and mulberry. I've been playing with the SNES variant but would happily own and display all three on my bookshelf.

Ergonomically, I prefer the SN30 Pro+ over the official Switch Pro Controller. The handles are longer and don't dig into my palms as much during long play sessions. I like the symmetrical analog sticks, too, which ape Sony's DualShock 4 — the other pad that I probably spend the most time with. The face buttons depress nicely and the D-Pad is practically identical to the one that shipped with the original Gameboy and SNES controller. It's a simple, but proven design that works across a range of titles including Tetris 99, Street Fighter 30th Anniversary Collection and the entire Nintendo Switch Online library of NES and SNES games.

The SN30 Pro+ is lighter than the Switch Pro Controller, which worried me initially. The first time I picked it up, I was reminded of every cheap and horrifically made third-party controller I had to endure as a child. The SN30 Pro+ doesn't flex, creak or generally feel like it's about to disintegrate, though. My initial fears quickly dissipated, therefore, and I appreciated its scant weight whenever I threw it into my backpack. 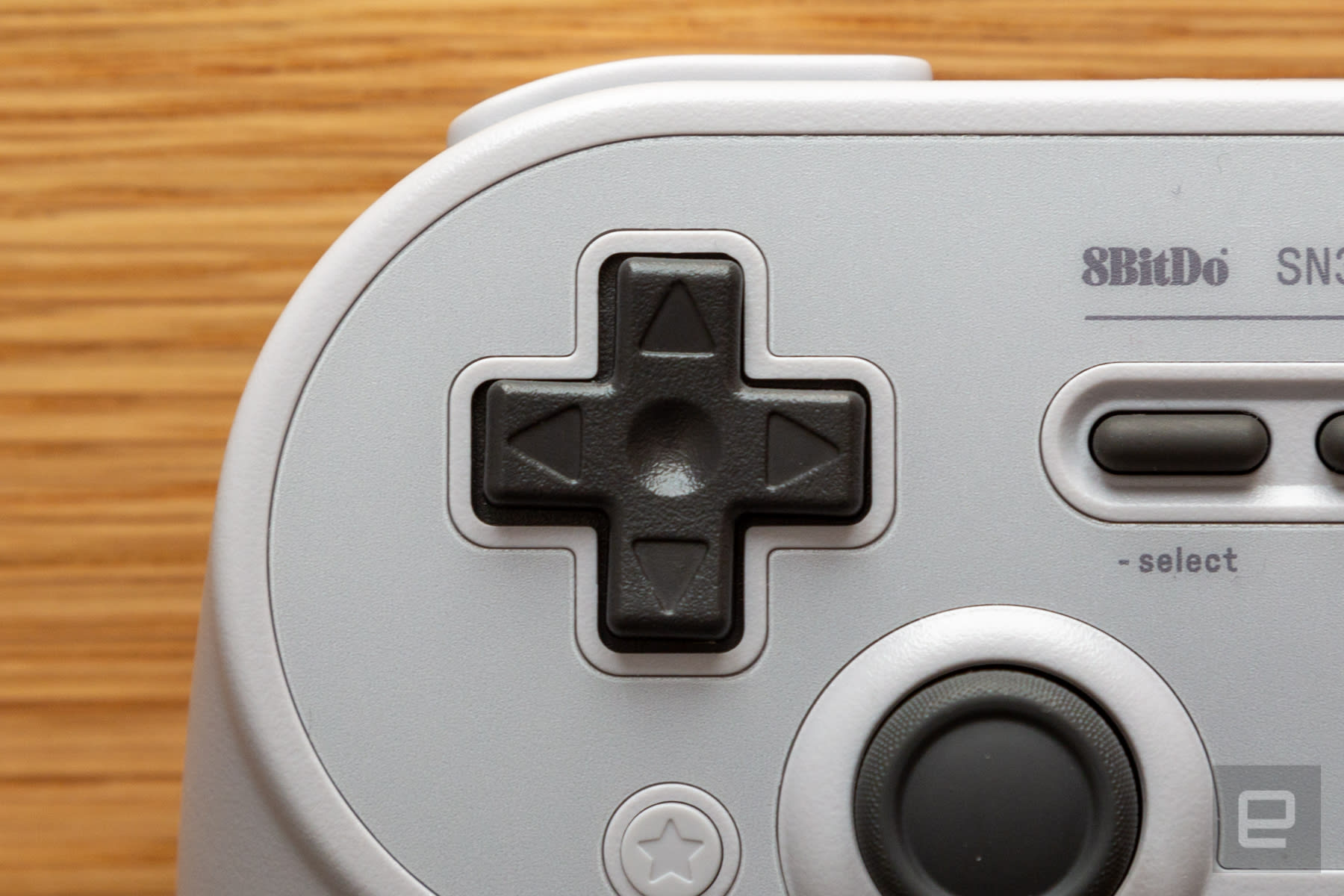 Decent D-pads are hard to come by.

Unlike the Switch Pro Controller, the SN30 Pro+ has analog triggers that know how far you've pressed them. Unfortunately, most Switch games treat them as digital inputs -- still, they're nice to have for PC and Mac sessions. I also appreciated the deeper pull distance in Fortnite and first-person shooters such as Wolfenstein II: The New Colossus. I don't think the triggers improved my performance — I still haven't won a game of Fortnite — but it made me more comfortable and, therefore, happier playing online.

To my delight, the SN30 Pro+ has a removable battery pack. It lasts 20 hours on a single charge, which is only half the playtime advertised by the Switch Pro Controller. Still, I appreciated its flexibility. If you suddenly run out of juice and don't have access to a power outlet, you can switch to AA batteries instead. It's a useful backup for camping trips and long-haul flights that only offer a single USB port for charging your various gadgets.

You can wave the SN30 Pro+ around to perform basic motion controls. The experience is obviously inferior to a pair of Joy-Cons, but I didn't have any problems waggling the pad to recharge my beam katana in Travis Strikes Again: No More Heroes. The SN30 Pro+ has rumble, too, though it's not the special "HD Rumble" that Nintendo offers with its Joy-Cons and Switch Pro Controller. 8BitDo's alternative also doesn't have NFC — if you love and frequently use Amiibo to unlock extras on your Switch, that might be a dealbreaker. 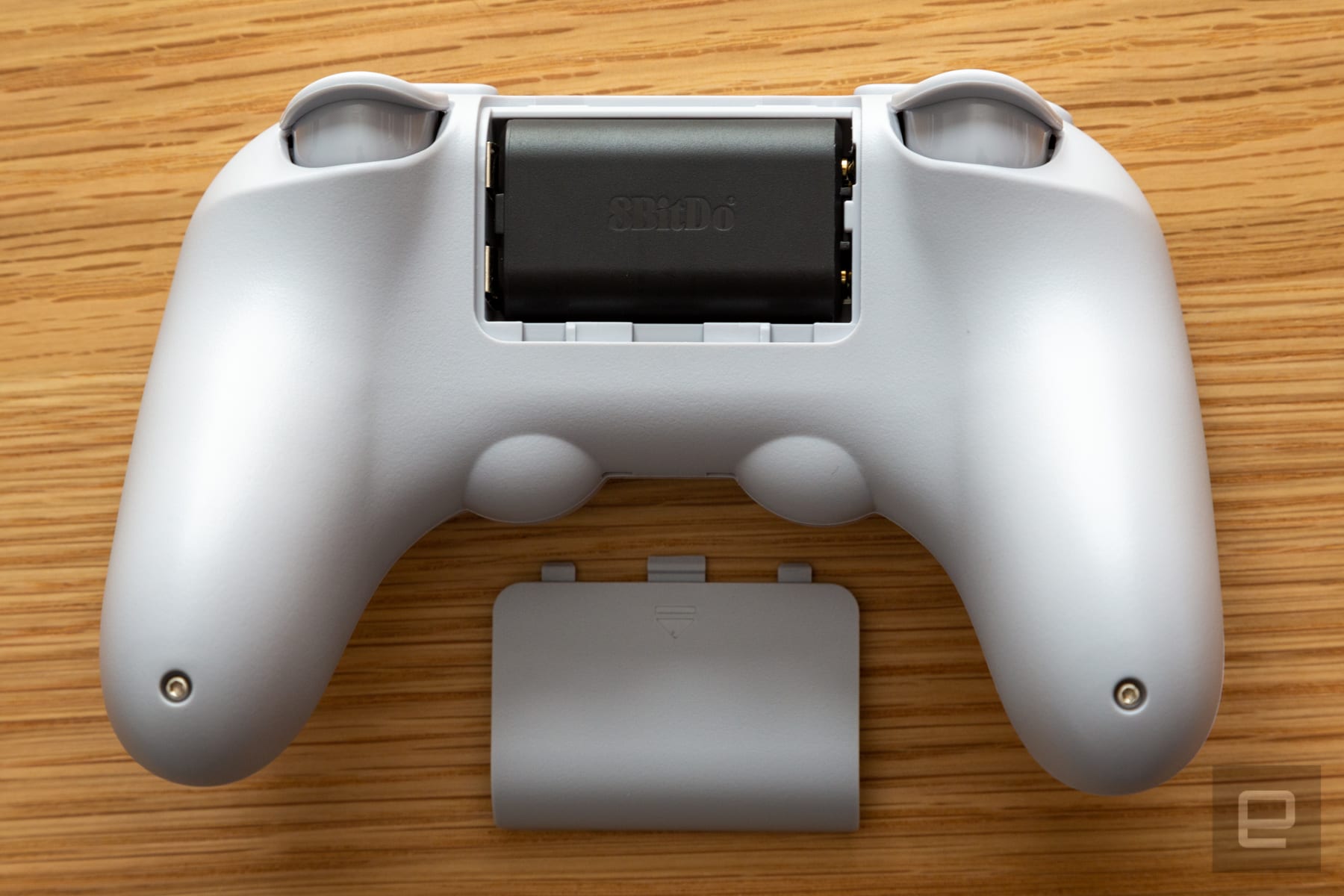 Every controller should have a removable battery pack.

To use the controller, you'll need to go through the slightly long-winded syncing process. There are four different button combos that turn the pad on: Y and Start (Switch), B and Start (Android), X and Start (Windows), A and Start (macOS). Secondly, you'll need to press and hold the pair button next to the USB-C port. The four LED lights at the bottom of the pad will then cycle to indicate that it's hunting for a companion piece of hardware. Finally, on the Switch, you have to open the Change Grip/Order menu and, if required, hit the shoulder buttons. For all other platforms, the controller will appear as an available Bluetooth device.

It took awhile for the controller to sync up with my Switch. Thankfully, you only have to go through this process once on Nintendo's system. For all subsequent play sessions, you can just press the Start button and the controller will instantly connect.

I was a tad disappointed that the SN30 Pro+ can't turn on the Switch itself. It's a small nitpick, but I love that with the Switch Pro Controller I can start playing Splatoon 2 or Super Mario Odyssey without standing up and walking over to my Switch Dock.

The SN30 Pro+ has one huge trick up its sleeve that makes up for almost all of its shortcomings: customization. Through the 8BitDo Ultimate Software, you can remap any button and create custom profiles. I created a simple one for the Switch, for instance, that swapped A and B around. (At long last, the face buttons line up with the 'confirm' and 'cancel' commands on my PS4.) Another window lets you change the 'dead zone' around each analog stick and the exact point at which a trigger registers your input. You can even set up macros that let you activate tricky combos with a single button press. (I shamefully used this to create a Hadouken shortcut.) 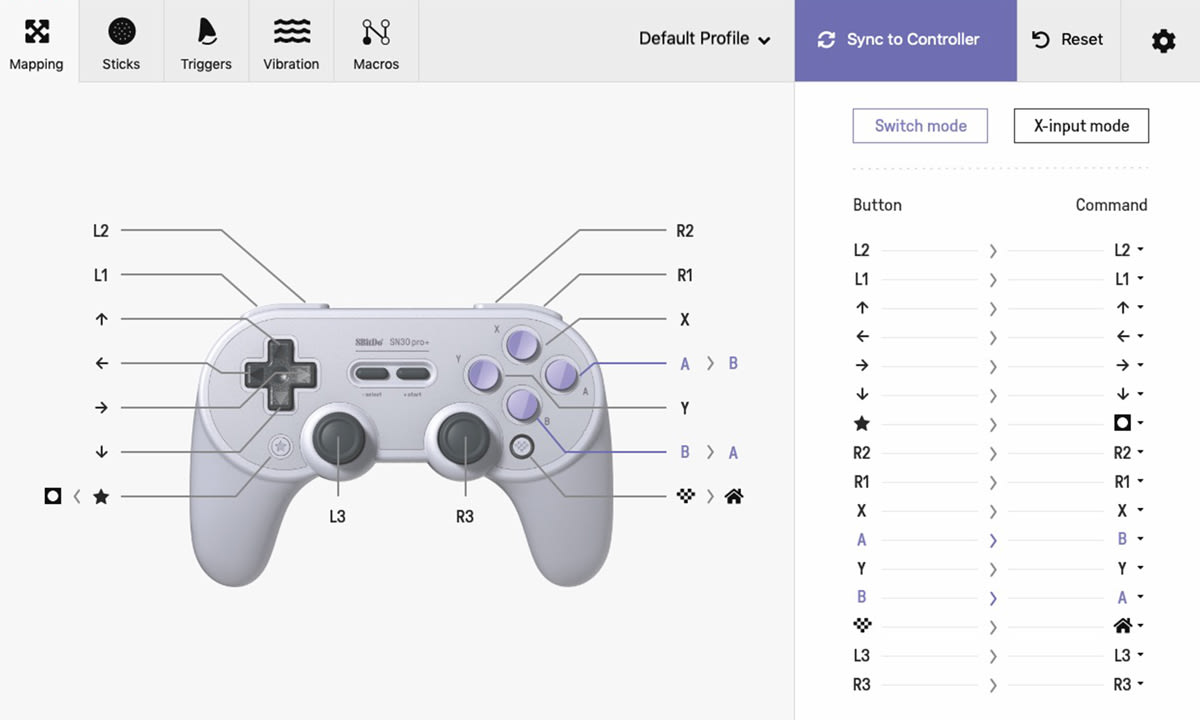 8BitDo's software is plain, but functional.

You can only switch profiles through the app, which is currently exclusive to Windows and Mac. For me, this wasn't a problem — I used the controller's default settings most of the time — but I can imagine how frustrating this would be for people that have game-specific profiles.

The SN30 Pro+ has a few other weaknesses. It doesn't have a headphone jack like, for instance, PDP's wired Faceoff Deluxe+ controller. I would have loved a simple carry case, too, to protect the pad on the road. And, at the time of writing, the pad doesn't support PlayStation 4, Xbox One, iPhones and iPads, though 8BitDo has hinted that it's working on support for iOS 13.

Otherwise, the SN30 Pro+ is phenomenal. It's a true alternative to the Switch Pro Controller that makes sensible compromises. NFC and HD Rumble? I'll happily sacrifice those for a better D-Pad and triggers. The customization options — while overkill for me — are brilliant and I love that I can also use the pad with my Android smartphone, MacBook Pro, and any gaming PC or Raspberry Pi-powered retro console I decide to build in the future. For $50, it's a no-brainer. Even if you own a Switch Pro Controller, I would recommend buying one as your Player Two or Three pad. And, like me, you might find that you prefer it over Nintendo's official offering.