The Skydio 2 begs you to try and crash it (but please don't).

When Skydio revealed the fully autonomous R1 drone, it was truly impressive. This thing could follow you like no other drone before, or since. You didn't need to wear anything (like AirDog), and its visual tracking system was smart enough to avoid almost any obstacle in its way, even at speed. But the R1 was kinda big (like a large pizza box) and at $2,500, prohibitively expensive for the majority. You also couldn't really control it yourself in a meaningful way, so it wasn't as versatile as DJI's cheaper Mavic 2 Pro.

Enter the Skydio 2. The second drone from the company is much smaller, has an improved camera, can be flown like a regular drone via an additional controller and has a secondary "Beacon" controller that's perfect for active pursuits. Oh, and it only costs $999 this time around. DJI might have one of its eyebrows raised right now. And if it doesn't, maybe it should.

The Skydio 2 looks like a truly consumer-friendly product. It's about 8 inches by 10 inches by 3 inches, making it much more practical to carry (and a lot less goofy looking). The R1 used 13 cameras to make a 3D model of the world around it. With the Skydio 2, there are now only six, which are much higher resolution (45 total megapixels compared to the R1's three). The new drone is also faster (36 mph, up from around 25) and with better battery life (23 minutes, up from around 16). 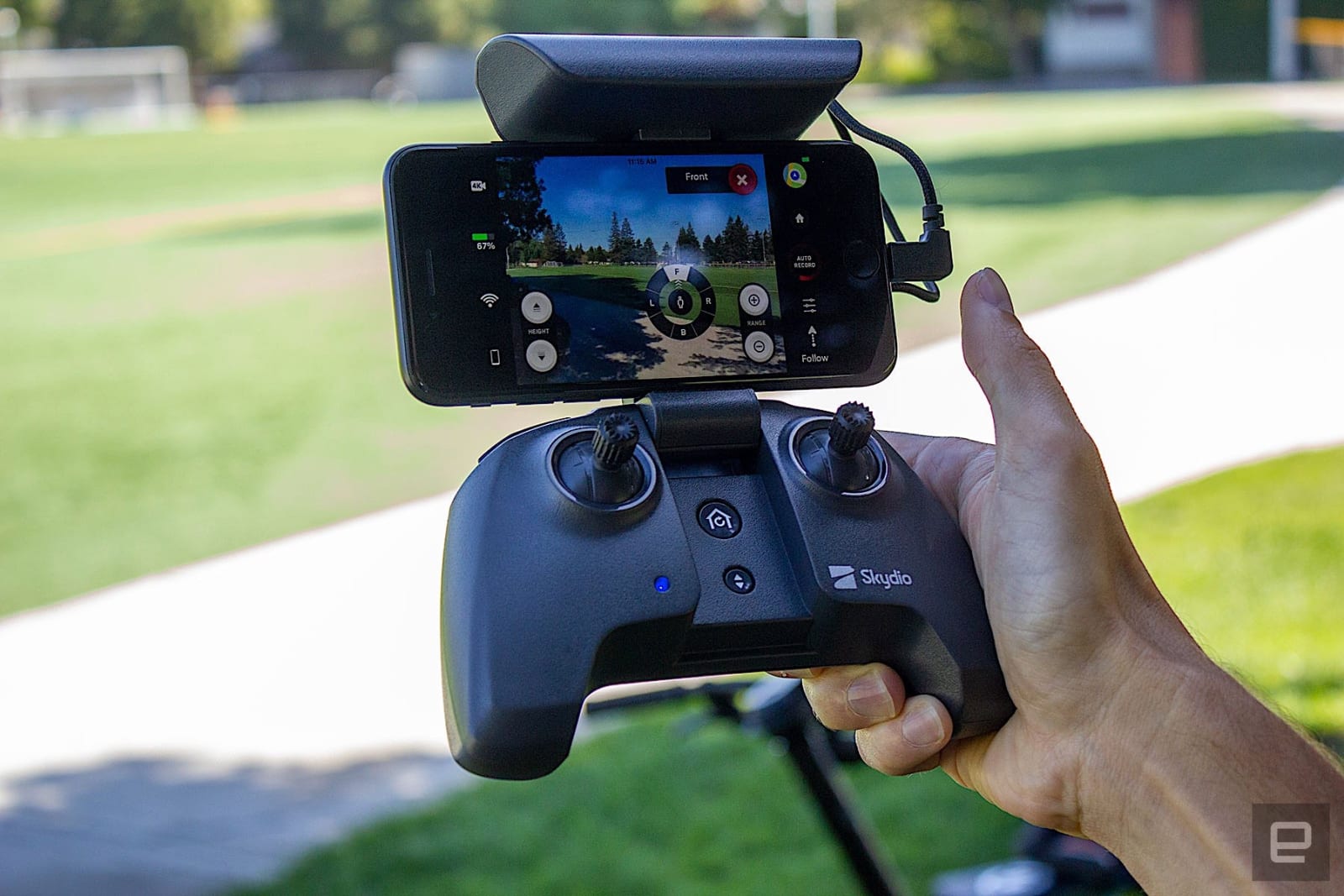 Perhaps the most significant change is the addition of two controllers, which cost $150 each. But if you bought both, along with the drone, your total spend is $1,300. The Mavic 2 Pro, by comparison, costs $1,729.

Why two controllers? Because each has its own use case. There's a conventional radio controller, with two sticks and some buttons. This not only gives you the ability to fly the drone beyond it following you, it also extends the range from 600 feet to 3.5 kilometers (about 2.2 miles). Finally, you can shoot regular aerial video as well as those selfie shots.

The second controller option is my personal favorite. Skydio calls it the Beacon, and it's about the size of a TV remote. With this, you also get the same range extension, but it's much simpler to use. Point the Beacon at the drone, click and hold a button, and then move your arm and the drone will follow. This works for left and right, as well as up and down. You can also change the "follow" mode from here too (front view, back view, circle, etc.). The key here is that it's easy to slip in your pocket, so won't get in the way of your activity. Oh, and it has a GPS sensor too, so if the Skydio 2 can no longer "see" you, it can fall back to GPS for tracking. 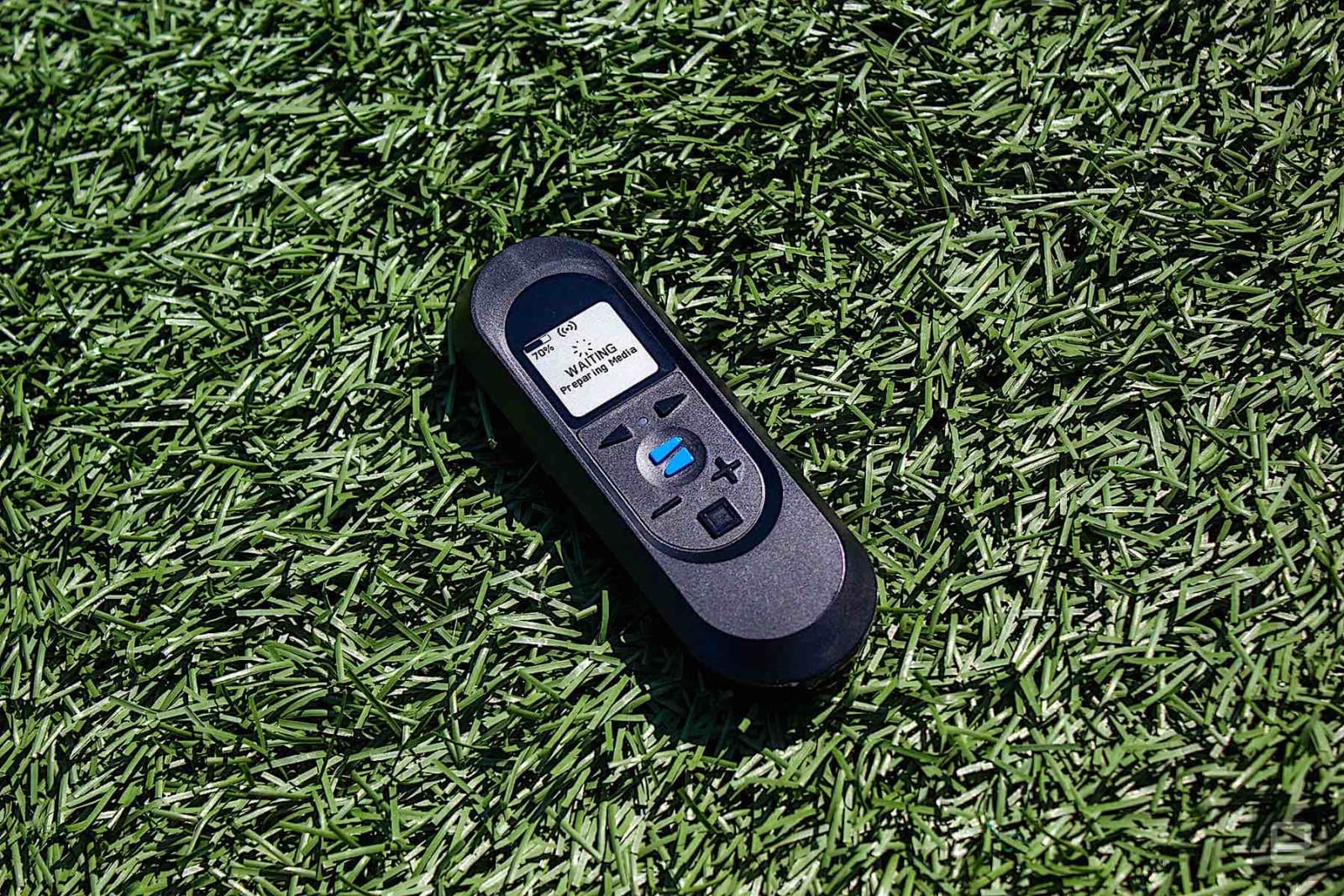 Even when you fly in manual mode, the Skydio 2 still uses its sensors for obstacle avoidance. This makes it pretty idiot-proof and allows for shots that are often too difficult for most pilots. To drive this point home, in a demo, company representatives flew it backward through some trees without having to do anything other than pull back on the stick.

I tried the same thing but closed my eyes (for dramatic effect I guess). Don't worry, we were in a safe space with no one around and others observing. But sure enough, the Skydio 2 wove its way through all the obstacles without missing a beat. I also tried ducking and diving around the same trees with it following me, and you can practically watch the machine-learning tech it uses making decisions in real-time about how best to navigate its surroundings.

Other features I liked from the R1 are thankfully still here. The drone starts recording as soon as it takes off — a simple thing but it adds to the ease of use. You can also still control it with your phone, so no extra gear needed (but this will mean limited range). Alas, there's no onboard storage this time — you'll just use an SD card now. That's fine, but a combo of both would be even better, to prevent the human error of forgetting to bring the dang memory card. 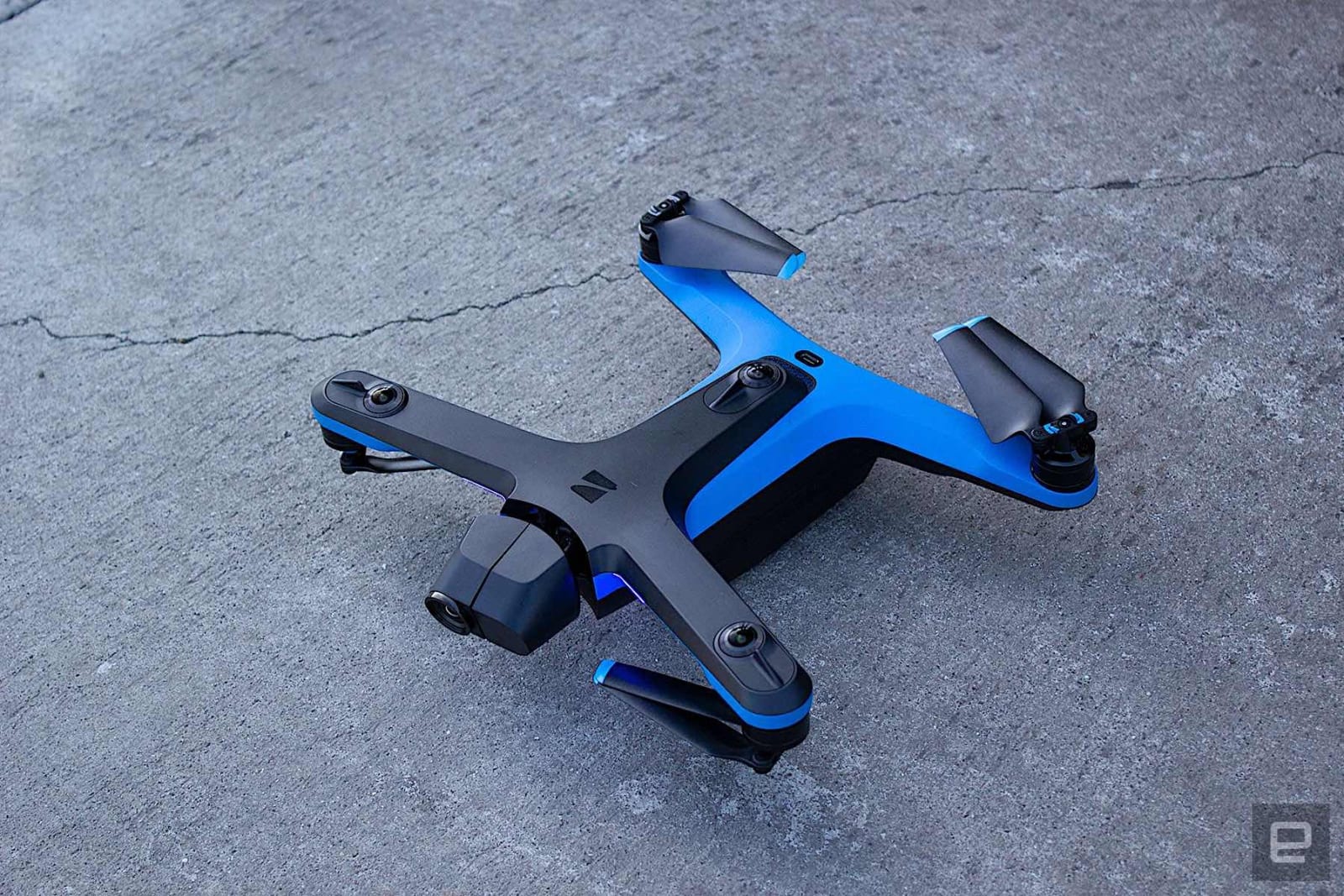 Skydio compared the R1 to Tesla's Roadster: a "proof of concept" product, but it was never the end goal. And considering how good the R1 was (for what it did), that's not bad. The Skydio 2 is much closer to the company's true vision: a practical, truly autonomous drone that also does anything a regular drone can.

DJI has been the king of consumer drones since, well, basically ever. It makes great products, but they're arguably "great" drones, with impressive cameras with some autonomous features thrown in. Skydio focused on cracking the autonomous/visual tracking part first — i.e. the hard part — and built a drone around it. This gives them something unique, and it's likely not really something the competition can just cook up overnight. For the first time in a while, drones are interesting again.

The Skydio 2 is up for pre-order starting today and will ship in November. The company tells me that anyone who bought the R1 will be able to buy the Skydio 2 for a "significantly discounted price," so if you were an early adopter, be sure to keep an eye on your inbox.