Here we go once more.

Microsoft is officially giving Windows on ARM-based processors another go, after its previous efforts (ahem, Windows RT) failed years ago. It's not like we haven't seen PCs using ARM chips recently. Qualcomm's been leading the charge with the Windows on Snapdragon movement producing laptops and hybrids powered by its Snapdragon processors. But with the Surface Pro X announced today, Microsoft is taking ownership of the second stab at an ARM-based PC. Although, it might be more accurate to call this attempt number 2.5.

It uses a customized SQ1 chipset, though, that the company's chief product officer Panos Panay said has "Snapdragon DNA." It's likely this thing is related to the 8cx processor Qualcomm made and from my very short time with the Pro X so far, it seems powerful enough. I opened the Control Panel to look up system settings and both the Start menu and the app opened quickly. It didn't feel like there might be an emulator in the way causing any lag, which is an encouraging sign. Then again, these are brand new devices with no third-party apps installed yet, so I'm not going to sign off on Windows on ARM yet.

I really enjoyed the 13-inch PixelSense display here, though. It was bright, vibrant and inviting even under the harsh lights at the demo area. I detached the screen from the keyboard, and was impressed by the slim 5.3mm profile. Despite being so thin, the 1.63-pound tablet felt sturdy and elegant. It certainly seemed lighter than the Samsung Galaxy Tab S6 and iPad Pro, in my experience. 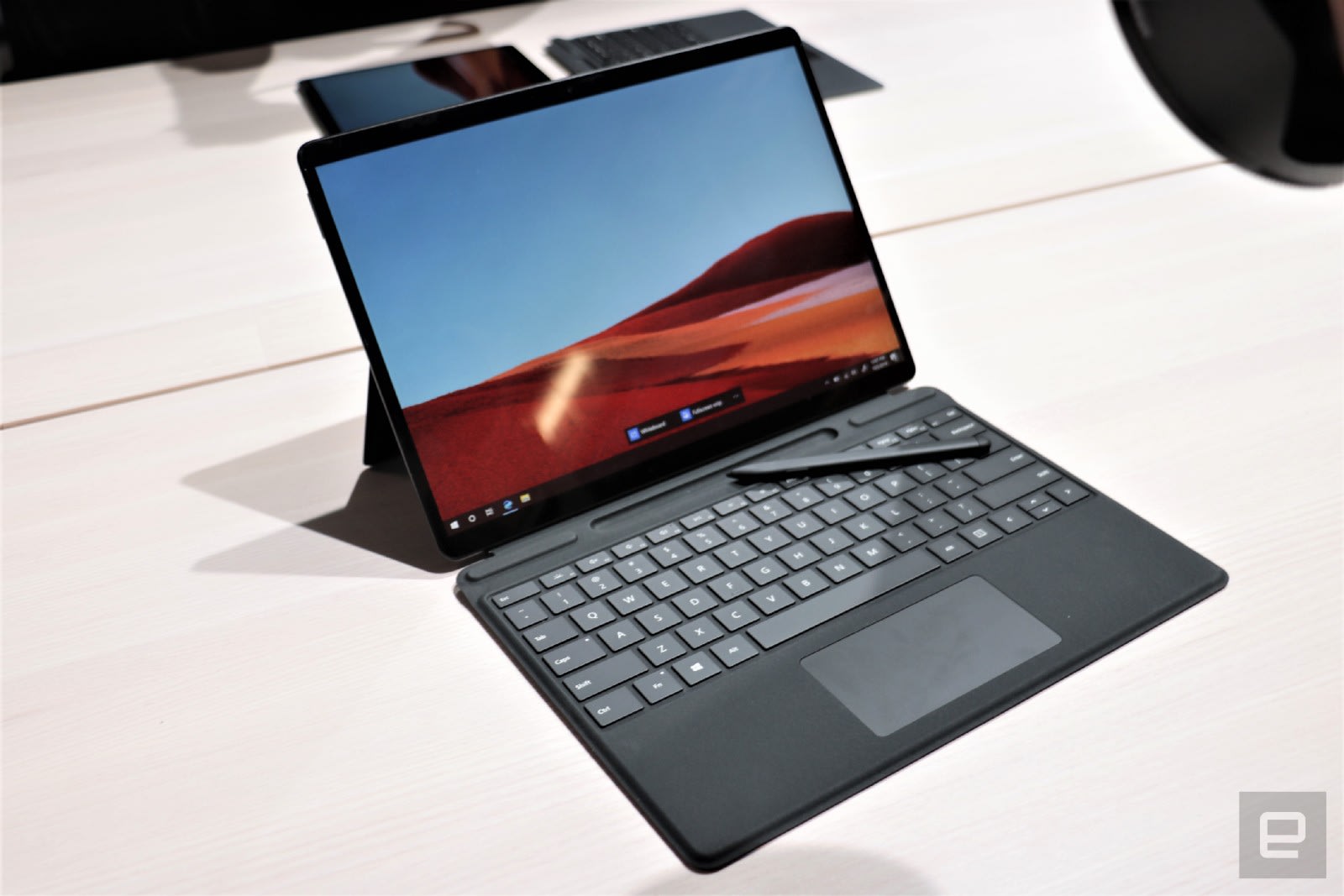 The new slim Surface Pen sat in a cradle above the keyboard, where it lay charging. It's flatter than most styli I'm used to and feels nicer than the old Surface Pen, though I still prefer the way Samsung's S Pen fits in my hand. In my experience, Samsung's stylus is also smoother to write with -- though I was able to easily scribble a welcoming message on my demo Pro X's Whiteboard app, I felt like the Surface Slim Pen's nib dragged against the screen a bit more than the S Pen.

Microsoft has the advantage on keyboard covers, though. I use a Surface Laptop 2 as my primary work machine, and love typing on that thing. It's impressive to me that the Pro X's new Signature keyboard cover packs a keyboard that's similar to the Laptop 2. It's cushy, responsive and has ample travel. The trackpad was also smooth, although I wish it were slightly bigger.

There's not much else I can test on our demo unit -- I tried connecting to the keynote WiFi to pull up websites and see how they run, but the network was spotty. Welcome to showfloor life. I did see an option for cellular connectivity, as well as an app that let you purchase mobile internet service, which bodes well for the idea of "always connected PCs".

The Surface Pro X is already available for pre-order starting at $999, and will be available on November 5th. I'm encouraged to see Microsoft take ownership of the Windows on ARM movement, but I'm still cautious about the performance. Till we are able to fully test and review this thing, I'd suggest waiting before you pre-order the Pro X.