Microsoft is right: Dual displays are a safer bet than folding screens

The Surface Neo and Duo should avoid the issues facing the Galaxy Fold.

There were plenty of rumors leading up to yesterday's Microsoft event about a foldable Surface. But instead of getting a true foldable, with a single bendable screen, Microsoft showed us the Surface Neo and Duo, which feature dual screens connected by sturdy hinges. Sure, they may look a bit archaic compared to the folding OLED screens phone makers are rushing to put on shelves, but maybe folding screens are more trouble than they're worth. Using two screens still gives us a taste of a whole new generation of computing, where our devices can take on wild new forms, but it does so with fewer headaches.

Now, it's clear that phone makers are cooling the hype around folding phones after Samsung's Galaxy Fold issues. It's not hard to imagine why: Making a single flexible screen that can withstand the torture of daily use is incredibly difficult. Just look at the insane warnings Samsung put on its revamped Galaxy Fold: keep it away from coins, keys and cards, you know things also in your pockets. Don't put too much pressure on the screen, even with your nails. And be sure to keep the fold away from small particles like pocket lint! And don't forget, never twist your phone the wrong way, a limitation of every foldable phone.

Those issues are less of a problem on devices like the Surface Neo and Duo. Instead of stressing the screen directly when opening and shutting them, the hinge takes the brunt of that force. You can also fold both Surface devices a full 360-degrees, allowing them to move from a booklet orientation to just a single screen when you need something more compact.

That's something OLED folding phones just can't do without serious compromises. The Galaxy Fold relies on an awkward and skinny external screen when its closed. Huawei's Mate X, meanwhile, has its entire folding screen on the outside. While that makes it usable when it's "closed," it also leaves your precious display completely vulnerable. That's particularly bad, since folding screens can't be covered in glass -- turns out, it doesn't really bend well -- and you likely won't be able to cover them easily with cases.

Simply put, using two separate displays is a huge win for durability. When they're closed, the Surface Neo and Duo feel a bit like jewelry cases protecting their precious screens. And even though their exteriors are also covered in Gorilla Glass, Microsoft reps say they're still strong enough to take a few tumbles. They couldn't use metal backing since that tends to interfere with antennas. And that's not something you'd want when you're pushing LTE on all these new devices. And given that they're relatively radio transparent, both could conceivably be upgraded with 5G down the line without changing the cases much.

"We experimented with folding screens as everyone else has, but then we came across this insight of having information on two separate screens and how much this helps the human brain show a flow of tasks," said Ralf Groene, Microsoft's head of industrial engineering, in an interview with Engadget. "And we were like, well why don't we make just two screens? It's much more flexible, more reliable, and you get into more positions." 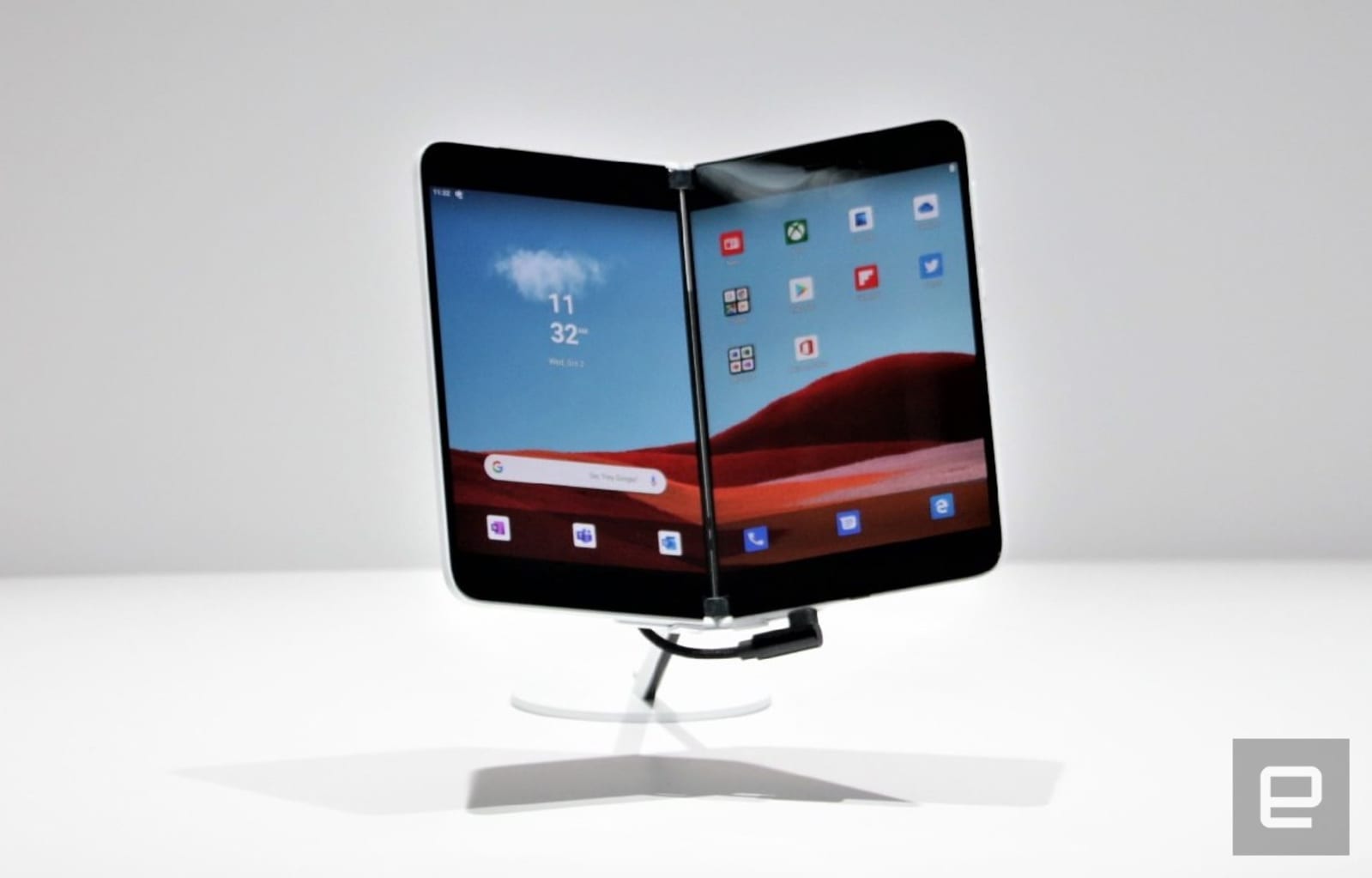 During my very brief hands on time with the Neo and Duo, they both felt like premium devices. Opening and closing them, in particular, was very natural. The screens moved smoothly, but there was also a satisfying amount of resistance, especially when I twisted them into a laptop-like mode. Don't forget that Microsoft has been obsessively focused on building hinges for PCs since the original Surface, and that experience is clearer than ever with these next generation devices.

The downside of using dual screens, of course, is that you'll have to live with the hinge and bezel down the middle. It's not nearly as seamless as a single foldable OLED. But based on the demos we've seen, the two displays still seem very usable. You can easily drag apps to either display, and span them across both screens if you want a tablet-like experience. Maybe it's just because I'm used to working on multiple monitors, but the break between the screens didn't bug me as much as the weird bump along the Galaxy Fold's hinge.

The design of the Surface Neo and Duo also allow for accessories that might not easily work with a folding display. There's a slim Bluetooth keyboard for the Neo that can magnetically stick to its rear and flip around whenever you need to type. Once you do that, the Neo turns the bit of the lower display still exposed into something called the "Wonder Bar," which holds emojis and other shortcuts, similar to Apple's TouchBar. You can also push the keyboard up a bit, so that it's sitting right below the top screen, and use the lower display like a touchpad. And if you'd rather write with your hands, you can also magnetically attach the new slim Surface Pen on the back of the Neo.

Now, I'm sure we'll figure out how to make reliable folding OLED screens eventually. But based on all of the issues around the Galaxy Fold, and the fact that we've seen only one other tiny company ship a foldable, it seems like we've got a long way to go.

And then there's the question of price. The Galaxy Fold sells for close to $2,000, that's the price of a specced out laptop. We don't know how much the Surface Neo and Duo will cost, but I'd bet they come in much cheaper, since they won't rely on an unproven display technology. The Neo will also have competition from other devices running Windows 10X, Microsoft's new OS for dual-displays, which should help keep the price in check.

It's also a good sign that Microsoft is taking its time with the Neo and Duo, which are expected to launch during the 2020 holiday season. They're not rushing to be the first like Samsung, and hopefully that'll help avoid embarrassing engineering issues. The jump towards every new generation of computing is a delicate one, and sloppy product launches could easily kill consumer interest. Microsoft might not have all the answers when it comes to dual screen devices, but at least it's addressing the obvious issues facing foldables today.