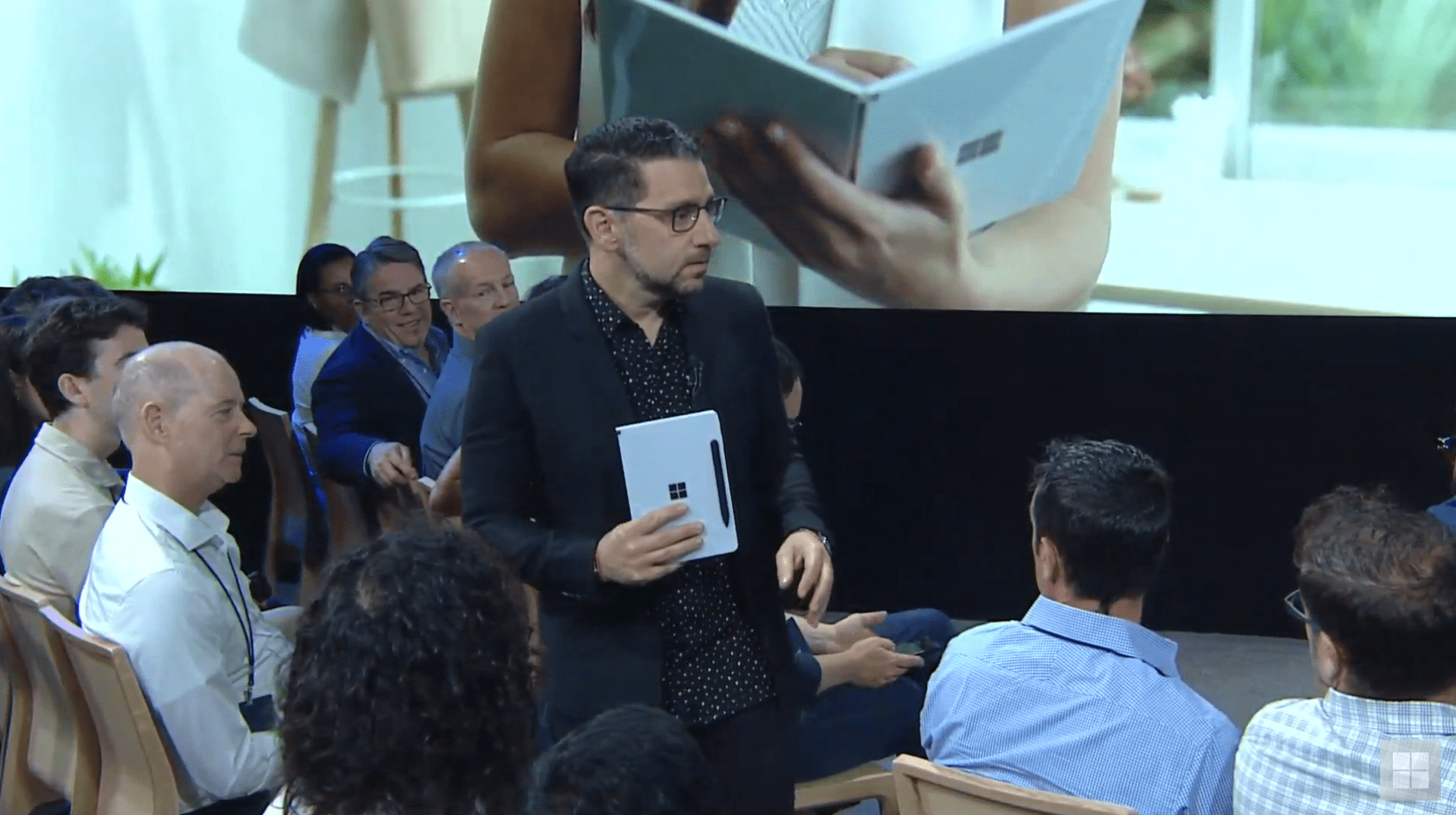 Microsoft has been mulling over the value of a dual-screen computer for at least a decade, and now it finally built one. Microsoft hardware chief Panos Panay pulled back the curtain on the new Surface Neo at a press conference in New York, and it essentially looks like -- what else? -- a foldable Surface.

"We wanted to make you a product that felt smaller, that fit your lifestyle, but also in a big way that made you more productive and creative," Panay said.

Each side of the product is 5.6mm thin and packs its own 9-inch LCD screen, which Panay said were thinnest out there. Those separate displays are connected by more than 60 microcoax cables, thinner than a human hair, to create the interaction between the two screens. When the Neo is fully unfolded, the combined screens come measure 13 inches diagonal. And all told, we're looking at a full package that weighs just under 1.5 pounds.

The slim new Surface Pen mounts magnetically on the Neo's back, and if you're really itching to get some work done, you can use an additional keyboard that unfolds to sit on top of the Neo's second screen. Inside, there's one of Intel's Lakefield chipsets designed specifically for dual-screen devices that uses a stacked architecture for improved efficiency -- they're also physically smaller, which makes sense considering the sizes of the devices we're talking about here.

While this is Microsoft's first public attempt at its own dual-screen machine, its hardware partners have already demoed (and in some cases, launched) their own takes on the concept. Last year, Lenovo released the Yoga Book C930, an ultra-light machine with a 10.8-inch display connected to a touch-sensitive e-ink panel. Lenovo's work in that case embraced a number of design and engineering ideas previously ironed out by chipmaker Intel in a handful of internal prototypes also revealed that year — Tiger Rapids used the same mix of LCD and e-ink screens, while the more pocketable Copper Harbor used two smaller, connected LCDs. ASUS also showed off its Project Precog concept in 2018 — which packed two big, beautiful touchscreens linked by a laptop hinge — before shipping a dual-screen laptop with a more conventional design.

Needless to say, the hardware has been doable for a while — it just needed the right software to make it feel truly valuable. As previously reported, the Surface Neo runs Windows 10X, a seemingly pared-back version of Microsoft's OS internally known as Windows Lite.

Using Windows 10X, the Neo can capably reflow apps running on one of the screens to fill both of them. And when you're using the fold-out keyboard case, Windows 10X is smart enough to squeeze all of the content you were looking at onto the primary display, while putting a "wonderbar" full of emoji and shortcuts within reach of those physical keys.

More importantly, Windows 10X draws on the same core technologies Microsoft has previously implemented in devices like Xboxes HoloLens 2, so app and feature development doesn't have to start from scratch as companies begin to build for the Neo. More importantly, that "one core" philosophy also means the Surface Neo will be able to run classic Win32 apps in containers, ensuring a level of compatibility could give Microsoft a crucial edge over would-be competitors like the iPad Pro.

In this article: centaurus, dual screen, gear, microsoft, microsoft surface, pc, personal computing, personalcomputing, surface, surface2019, tablet
All products recommended by Engadget are selected by our editorial team, independent of our parent company. Some of our stories include affiliate links. If you buy something through one of these links, we may earn an affiliate commission.