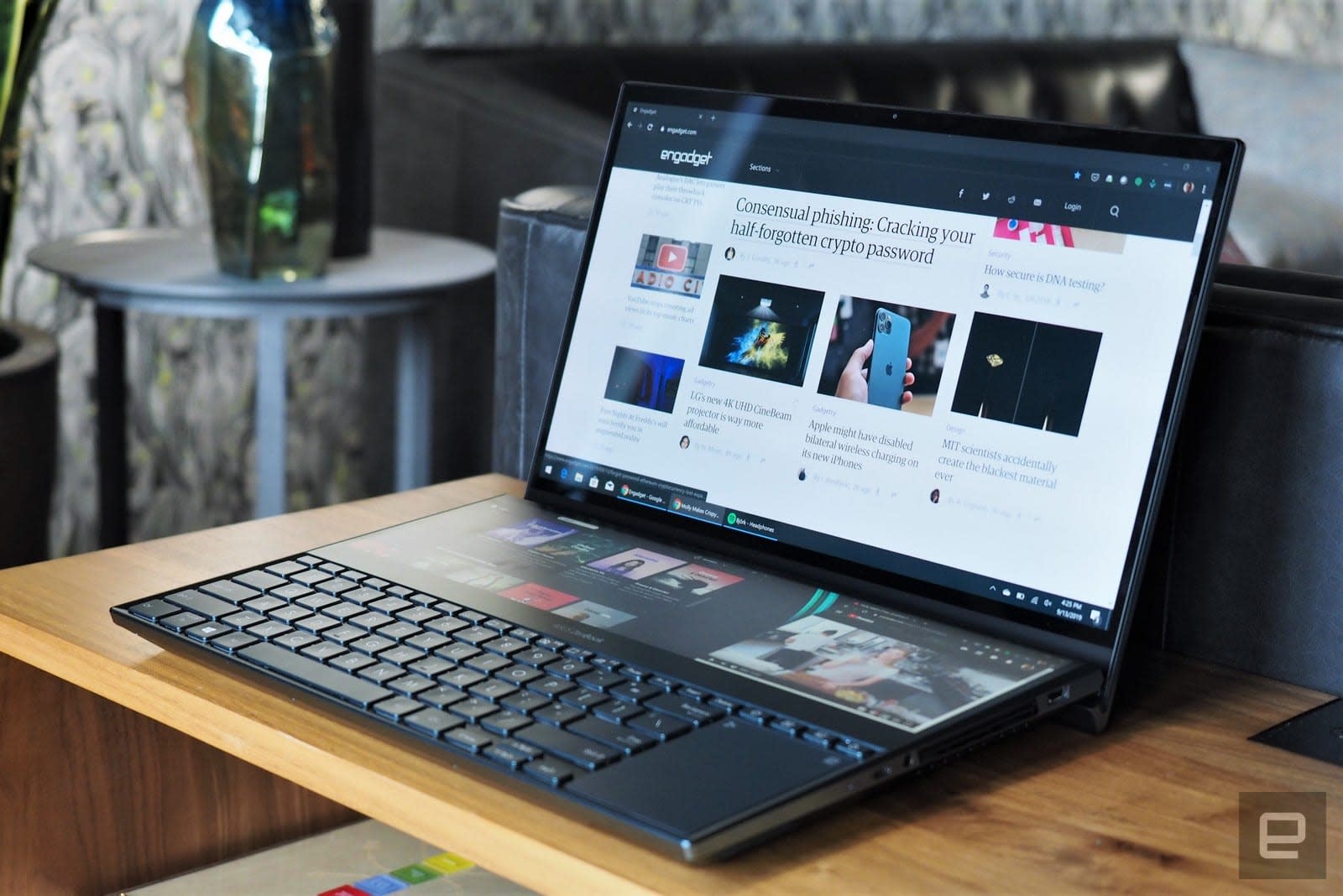 Its wide second screen is made for productivity fanatics.

ASUS already paved the way for dual-screen laptops with last year's ScreenPad on the ZenBook Pro, but now it's taking the concept to another level with the ZenBook Pro Duo. It's a powerful 15-inch workstation with a huge secondary display that spans the entire width of the machine. ASUS calls this the ScreenPad Plus — instead of being a tiny display tucked inside the touchpad, like the original, it's more like having a fully functional second monitor right on your laptop. The experience isn't perfect, but it's clear that ASUS has actually put some thought into how consumers could use an alternate display like this. And at the very least, it's miles ahead of Apple's Touch Bar.

The ScreenPad Plus measures 14 inches across diagonally, but it's just under 4 inches tall. As you'd expect, it has an odd resolution at those dimensions: 3,840 by 1,100 pixels. It's basically a 4K screen cut in half. It's a bit awkward, but it suits the ScreenPad Plus's secondary status. You can open up three apps side by side — it's just tall enough to get a decent view of Slack conversations and Spotify's interface. 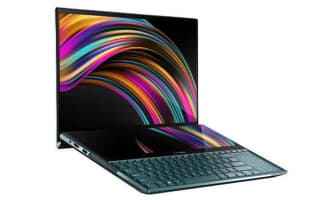 The ScreenPad Plus acts just like a second desktop monitor: You just drag the mouse down to interact with it. You can drag down apps and arrange them as you'd like, or you can hit a button to swap everything between the two screens (for example, if you had Spotify open up top and your email below, they'd be switched). A small toolbar appears whenever you move windows, which lets you quickly send an app to the bottom screen, or span it across both. I'm used to running multiple desktop monitors, so moving between the two screens felt natural. If you're mainly used to running a single screen, though, it might take a bit of getting used to.

Both of the ZenBook Pro's displays are touchscreens, but I found that feature most useful on the ScreenPad Plus, where I could quickly skip tracks in Spotify or hop to a Slack chat instantly. The wide secondary screen is also useful for spreading out toolbars and timelines in media editing apps. There are still some issues to work out, though. Blowing up apps across both screens involves making a huge window, and sometimes that cuts off content along the edges. It feels more like a weird hack, instead of a polished feature.

Another issue with the ScreenPad Plus is the huge difference in quality between that and the ZenBook Pro Duo's gorgeous 15.6-inch 4K OLED screen. The bigger display features HDR and all of the benefits of OLED — inky dark blacks and tremendous contrast. The ScreenPad Plus, though, is an LCD panel with a completely different color profile. Managing the brightness for the two displays separately is annoying: the brightness keys only affect the main screen and you have to pull up a separate setting for the ScreenPad Plus. And since the screens are so different, it makes it hard to match colors, which will annoy artists and anyone who depends on fine accuracy.

Still, in practice, I found plenty to like about having more room to spread out on a laptop. I could finally keep an eye on a YouTube stream while also working on a full-sized windows up top. I could control Spotify far more easily than with keyboard controls (though its interface is a bit cramped on such a small screen). Using the ZenBook Pro Duo felt far less limiting than most laptops, where I'm always jumping across multiple windows cramped into a single 13-inch screen.

Beyond the novelty of having two displays, the ZenBook Pro Duo is also a powerhouse. Our review unit featured Intel's 9th-gen octa-core i9-9980HK CPU, NVIDIA's RTX 2060 GPU and 32GB of DDR4 RAM. It's built more for heavy-duty content creation than gaming, but you'll certainly be able to enjoy most modern games like Overwatch and Destiny 2 in 1,080p and 1,440p. In our benchmarks, it held its own against similar desktop replacements, like the Alienware Area 51m.

The Pro Duo looks like a super-sized version of ASUS's ultraportables, with a smooth metal case and polished edges along its sides. You've also got a slew of ports to choose from, including full-sized HDMI, a USB-C Thunderbolt 3 socket and two USB 3.1 Type A connections. Given its productivity focus, though, I'm surprised there isn't a built-in SD card reader.

To fit the ScreenPad Plus, ASUS also had to move the keyboard to the bottom of the laptop, similar to its Zephyrus gaming laptops. The trackpad is down there as well on the right side. It takes some getting used to, but at least it gives you plenty of room for swiping around, unlike HP's Omen X 2S. The full-sized keyboard feels great to type on, with large key sizes and a generous 1.4mm of travel. It's not so great ergonomically, since it's at the very tip of the laptop, but you can always snap on the included wrist rest for a more comfortable typing position.

The only major downside with the ZenBook Pro Duo is that it's pretty hefty. It weighs 5.5 pounds and measures almost an inch thick. That's a full pound heavier and almost twice as thick as the XPS 15. Dell's notebook doesn't have a second screen, of course, and it's limited to slower NVIDIA GTX 1650 graphics. But it would certainly be easier to lug around than the ZenBook, and the XPS also has Intel's 9th-gen CPUs. Apple's 15-inch MacBook Pro is also significantly lighter and sleeker at 4 pounds — but you'll be limited to Radeon Pro graphics and don't have the option of OLED.

The ZenBook Pro Duo starts at $2,499, $100 more than the base model MacBook Pro 15-inch and a similarly equipped XPS 15 with an OLED screen. Our review model is the most powerful configuration from ASUS, which goes for $2,999.

Not surprisingly, you won't get much battery life from the Pro Duo when using both screens. During my typical workflow, which involves hopping between dozens of browser tabs, Slack chats, Spotify and image editing apps, it lasted around three to four hours. In our battery test (looping an HD video) the laptop went for 3 hours and 50 minutes with both screens enabled. And with just the main screen, it went for six and a half hours.

While the Pro Duo may look a bit clunky, but ASUS proved that it's possible to stuff a decently sized secondary screen into a laptop, and make it worthwhile. At Computex this year, we also saw a dual-screen gaming prototype from Intel, so I wouldn't be surprised if other PC makers follow suit.

The ZenBook Pro Duo means business. It's not a laptop for someone who wants the lightest and sleekest machine possible. It's meant for power users who want to dedicate themselves to the portable dual-screen life.