Intel's Open House event at Computex was filled with Project Athena devices, prototype demos, new chips and more, but the company's dual-screen prototypes were the ones that drew the crowds. Its new Honeycomb Glacier form-factor concept is for some of the most discriminating (and most PC buying-inclined) customers: gamers and creators.

ASUS might have beaten the chipmaker to the punch with its ZenBook Pro Duo -- and that's here, too -- but Intel's own design was arguably a better sales pitch for dual-screen laptops.

So let's take a look at this laptop. Yes, despite what it looks like unfolded, this is still a laptop. The prototype design has a dual-display setup made of a primary 15.6-inch screen, at full HD resolution, and a 12.3-inch display at half the vertical height. Like the ZenBook Pro Duo, the full-width companion screen is above the keyboard. However, Intel's reference design has a more considered feel, attempting to reframe the design of powerful laptops.

I was a little obsessed with those hinges and how it transforms your display location without the need for an awkward stand or secondary keyboard. From closed, the screen neatly opens up like your usual laptop. However, the primary screen then tilts upwards, at any degree you like, pulling the secondary screen along with it. It'll then stay at whatever position you pull it to, with a subtle button on the hinge for unlatching and closing. It's already surprisingly well-finished for a mere prototype.

But, and if you've read about Intel concept devices before, you might agree -- so what? Concept models and display designs often struggle to convey their reasons for existing. With this Honeycomb Glacier concept, I'd say Intel has less of a problem.

The elevated screen brings everything up to the perfect eye height -- think iMacs and other all-in-one PCs, making it a comfortable fit for activities that need a lot of attention, like video editing, writing or gaming. My mediocre efforts playing League of Legends were hampered more by the trackpad without buttons than what I was looking at. Even at a trade-show, the screen positioning seemed spot-on, and less like I was playing awkwardly on a laptop.

Even at this prototype stage, this machine could certainly handle something a little heavier. Inside there's an overclocked 45W Core i9 processor as well as an NVIDIA GTX 1070. Under the hinge, a giant circular vent pulls air across the device, with further vents dotted around the sides of the base. It means Intel can keep its processors running overclocked and tap into some secondary benefits of that elevated screen.

Look a little lower and the 12.3-inch companion screen is just that -- a companion to the main event. You could keep your Slack chat app open while you focus on tasks, monitor your gameplay stats while fighting away on LoL or monitor Twitch chatter as you stream. Because it's also propped up, unlike the ZenBook Pro Duo, it's easier to casually scan -- it's already in your field of view.

That brings me conveniently to the next marquee idea, here: relevant Tobii eye-tracking. We've covered Tobii tracking before, but unfortunately, it's either been gimmicky or simply rarely used. The hinge that acts as a seam between the two displays is perfect for the cameras and sensors, and they neatly line the center of the hinge, conveniently at eye level.

Perhaps in part due to that, Tobii's interface was working with only minor hiccups even during this early demo and amid the Intel press scrum chaos. As I shifted my focus downwards, the secondary screen automatically drew keyboard input to shrunken (but fully featured) apps. If the companies involved can make it even more reliable, then this could be perfect for instant Slack responses or replying to commenters during your YouTube livestream. You can even draw your eyes to Cortana, and it'll start listening to your requests. It's a little uncanny. 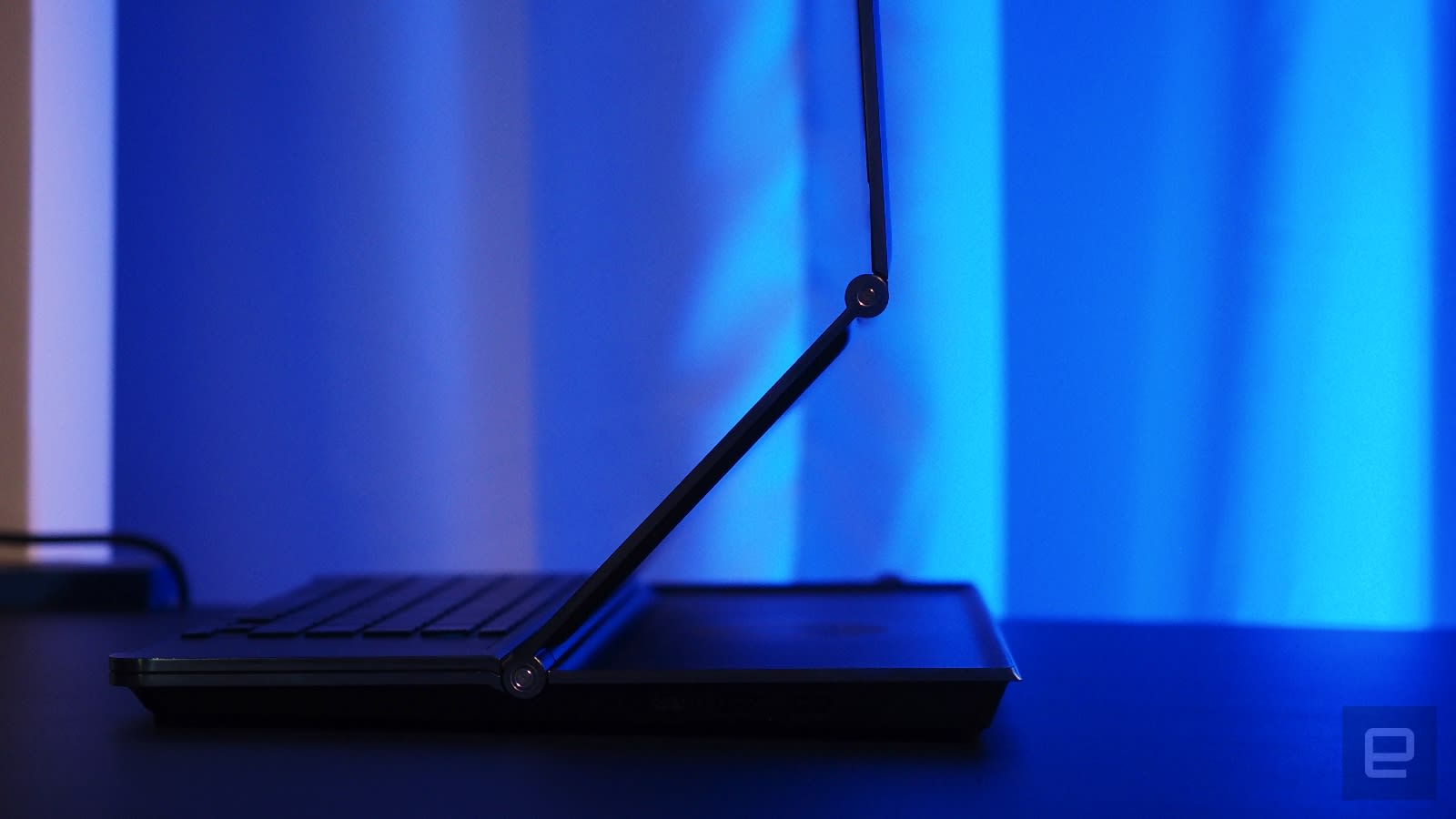 This might be the most interesting, most achievable Intel prototype I've seen in recent memory. At this formative stage, too, Intel (and whichever PC company bites at the idea: Acer, maybe ASUS?) has ample time to ensure it is ready for prime time. Some little issues need addressing: Why aren't there buttons on the unusually vertical trackpad? And the eye-tracking software really has to nail its reliability problem.

With two screens, considered design and specifications similar if not exceeding what we're playing with in Taipei, the potential for a powerful new laptop format is rather exciting. And for Intel, it might be less of a hard sell to demanding PC shoppers. The company is speaking a lot of sense -- and companies are very much interested. Following on the heels of ASUS and HP, Dell announced today that it was also working on its own dual-screen devices. M