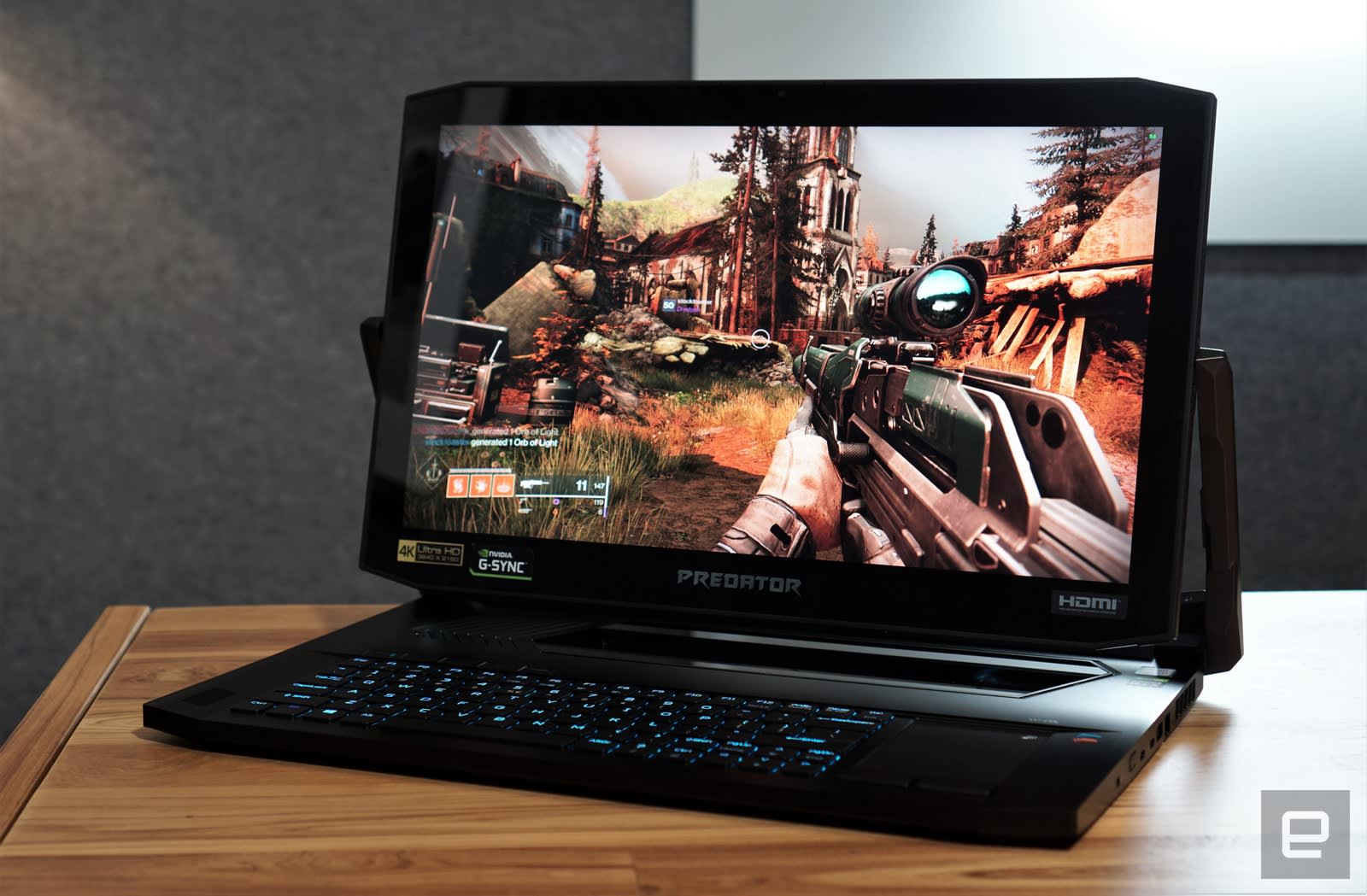 Remember when we said gaming laptops were going to get wild this year? Behold Acer's Predator Triton 900, a massive 17-inch notebook with one of the craziest screens we've ever seen. It can swivel forward and backward to give you something like the flexibility of a standalone monitor. But is a funky screen hinge enough to justify a $3,800 starting price? Probably not.

Obviously, the Triton 900 isn't going after people looking for more-portable gaming notebooks. It's a nine-pound behemoth that looks like a tool of urban warfare. It's a blend of gothic and industrial construction -- as if the Batmobile from Tim Burton's and Christopher Nolan's Batman films had an unholy love child.

You can tell it means business at first glance. Acer's Ezel Aero hinges give the Triton 900 a striking profile, and they perfectly frame the massive 17-inch 4K display. By default, the hinge holds the screen just like any other laptop, but you can also pull the display toward you, which could be useful for touchscreen games or for getting a different angle on the action. The screen can also flip all the way around so that it hides the keyboard behind it. That effectively turns the laptop into a tiny 4K TV, so you can play with a controller and fewer distractions or game from a second monitor while giving your friends a show. 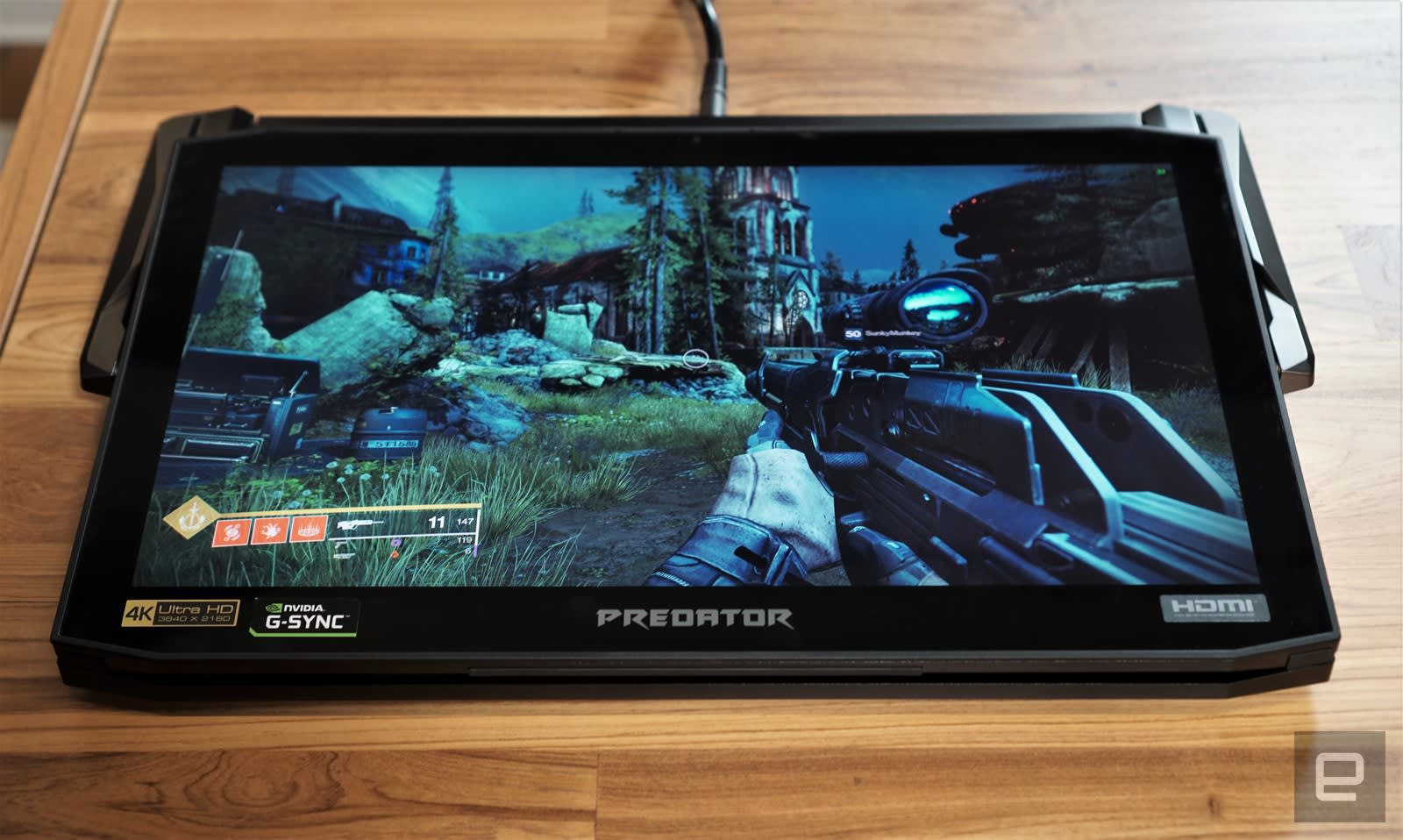 Finally, you can lay the screen completely flat like a giant tablet. To be honest, I'm not sure what sort of games you'd play in that mode -- maybe a giant multiplayer version of Fruit Ninja? For the most part, it seems like something Acer did because the hinge made it possible. The company didn't include active stylus support either, so it can't compete with more creator-oriented machines like the Surface Book. You'll have to buy your own stylus, and you'll never get high-quality pressure sensitivity. Instead, Acer is pointing creative types to its ConceptD 9 notebook, which also has a swiveling hinge.

Taken as a whole, the Triton 900 looks unlike any other notebook out there. It even has a glass window so Acer can show off how much of a hot rod it is. But while the metal case makes a nice first impression, the construction isn't particularly solid. There's some awful creaking whenever you pick it up, which is a clear sign of weakness in such a heavy machine and not at all what you want to hear coming from a $3,800 laptop. 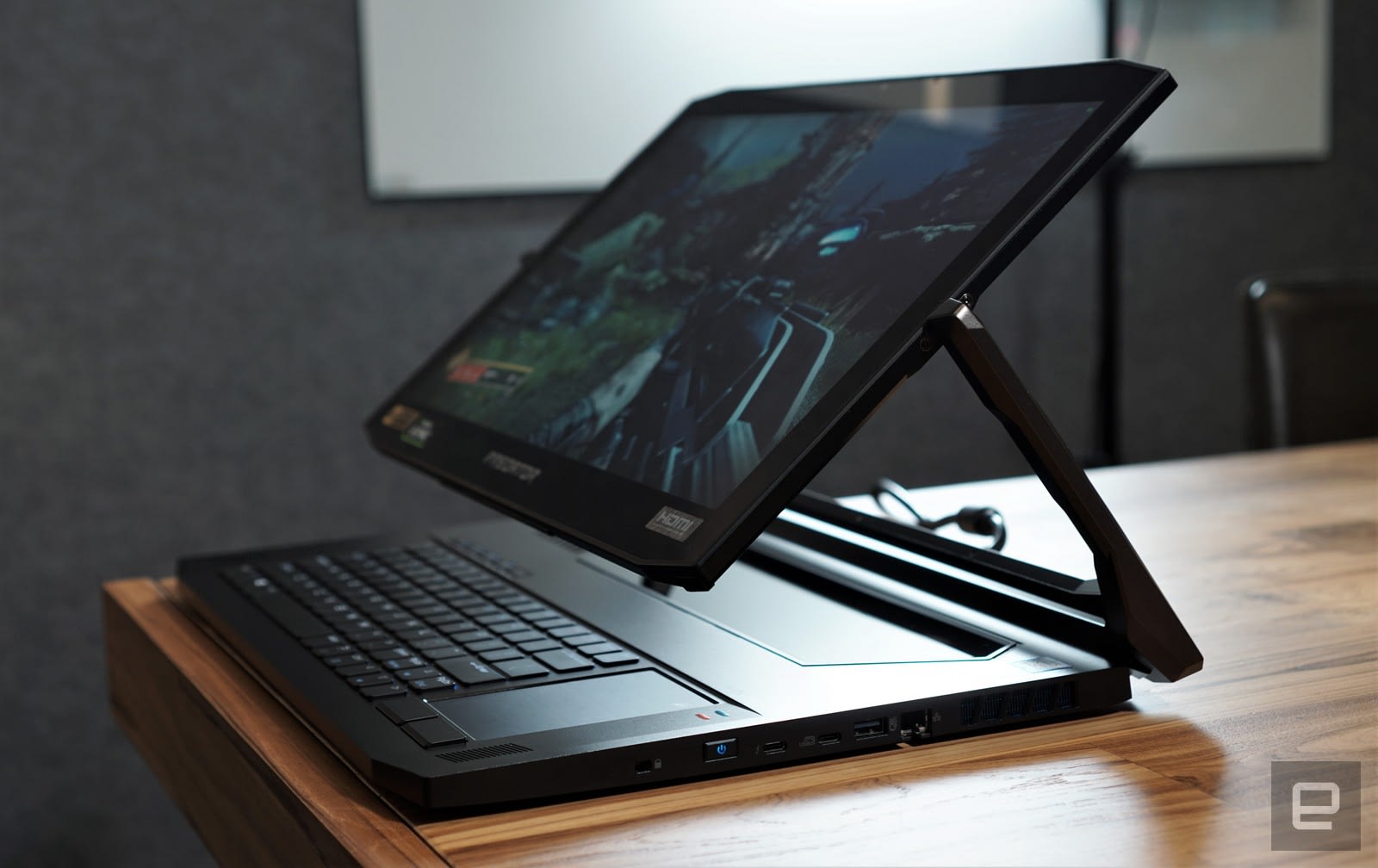 Similar to some other tricked-out gaming laptops, like ASUS's Zephyrus, Acer shoved the keyboard to the front to make room for cooling beneath the monitor. That means there was no choice but to put the trackpad on the side. The Triton 900's mechanical keyboard feels great for gaming and was super responsive while I was hopping around the map in Overwatch and Destiny 2. But typing is a pain, due to the short key travel as well as some odd layout decisions, like a bafflingly tiny right-shift key. The touchpad is fine for basic navigation, but it's too small to make multitouch gestures feel comfortable.

Every Triton 900 model includes NVIDIA's RTX 2080 GPU, which is the fastest graphics you'll find in a gaming notebook today. We reviewed the base unit, which features a Core i7-9750H processor, 32GB of DDR4 RAM and two 512GB SSDs in a Raid 0 configuration, which shows up as a single one terabyte drive. Clearly, Acer is going for uncompromising speed with this machine. You can also step up to Intel's flagship Core i9 CPU for $4,800, if you have an extra grand to burn.

Now, this might not be a huge surprise, but the Triton 900 is pretty fast. Overwatch, a title that's known for scaling well across all sorts of hardware, reached between 100 and 120 fps with epic-quality graphics. You might still have some trouble reaching decent frame rates at 4K though. I only got 52 fps in the Hitman 2 benchmark with all of its graphics settings maxed. That's still decently playable, but for something this expensive, it'd be nice to at least get 60 fps.

And you can expect NVIDIA's ray-tracing technology, which allows for more-realistic lighting and shadows, to cause another hit for supported games. The Shadow of the Tomb Raider benchmark scored 55 fps in 4K but a practically unplayable 35 fps with 4K and ray tracing settings set to max. I also enabled NVIDIA's DLSS technology for those benchmarks, which uses deep learning to improve performance. I tried overclocking a bit with Acer's Predator Sense and saw 41 fps with ray tracing turned on. That's a decent performance bump but it's not a guaranteed success, and it caused the game to crash several times. Overclocking also made the fans in the system sound like jet engines taking off. The computer warmed up to 70C, which is typical for many gaming notebooks under load but way too hot to put on my lap. 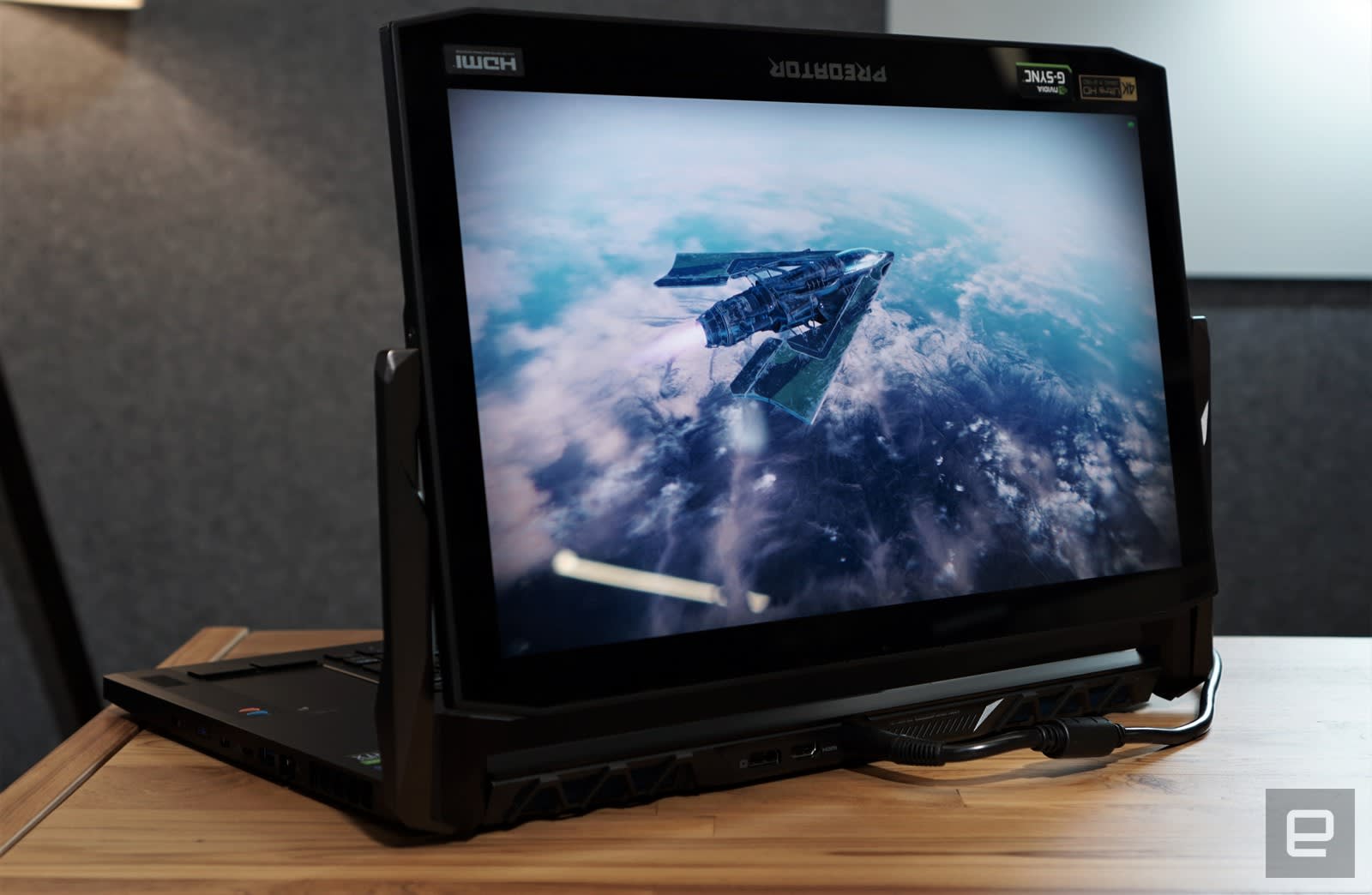 While the Triton 900's 17-inch screen looks decent, it's not as bright as some other notebooks like the Razer Blade. And its 60Hz refresh rate limits your framerate to 60 FPS. NVIDIA's G-SYNC technology does a great job of smoothing out faster gameplay, but to be honest, games look noticeably smoother on 1080p screens with faster 120Hz and 144Hz refresh rates. That's a feature we've seen on most other gaming laptops over the past few years.

Let's face it, rendering 4K natively is incredibly resource intensive, even with top-of-the-line hardware. A more realistic gaming resolution would be 1,440p, since it's a slightly higher resolution than 1080p, but still reasonable enough to run most games with maxed out graphics.

Unfortunately, I've heard from several laptop makers that there simply aren't many 1,440p panels around today. And another bit of bad news: the Triton 900 doesn't natively support 1,440p either. I had to manually add it as a resolution option in NVIDIA's settings. If you don't do that, you're stuck with a slightly lower res 2048 x 1536 option, something we've only seen on iPads until now. 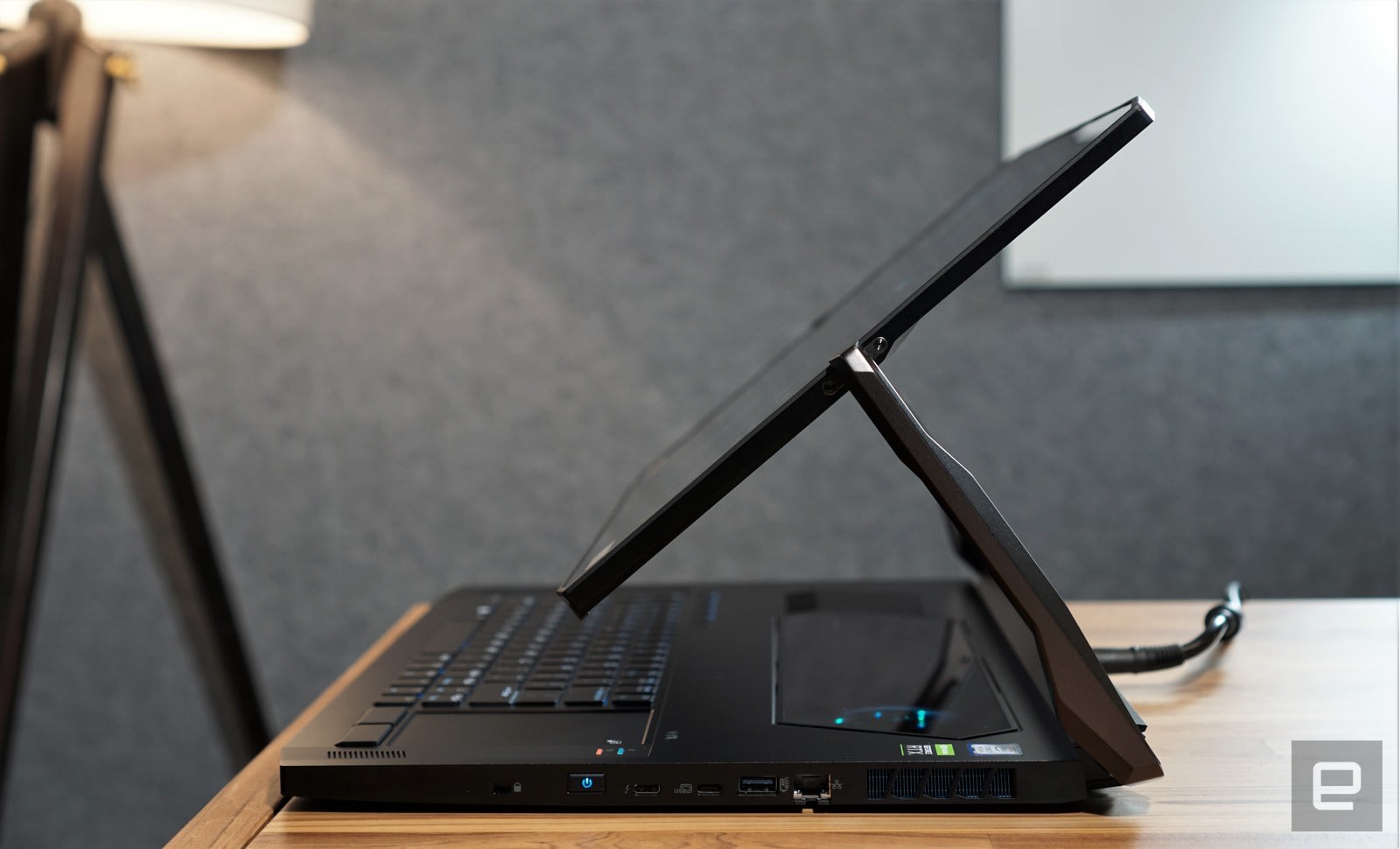 It's sad to say, but the Triton 900's hinge didn't add much to the experience either. It was nice to be able to pull the screen closer to me during hectic firefights, but that's not something I've ever really wanted from a gaming laptop. And while being able to flip the screen around sounds nifty, it's actually even less useful. I found it more convenient to leave the screen above the keyboard, just in case I needed to shoot off a quick IM or check Slack. Oh, and don't get me started about the pointlessness of the tablet mode. 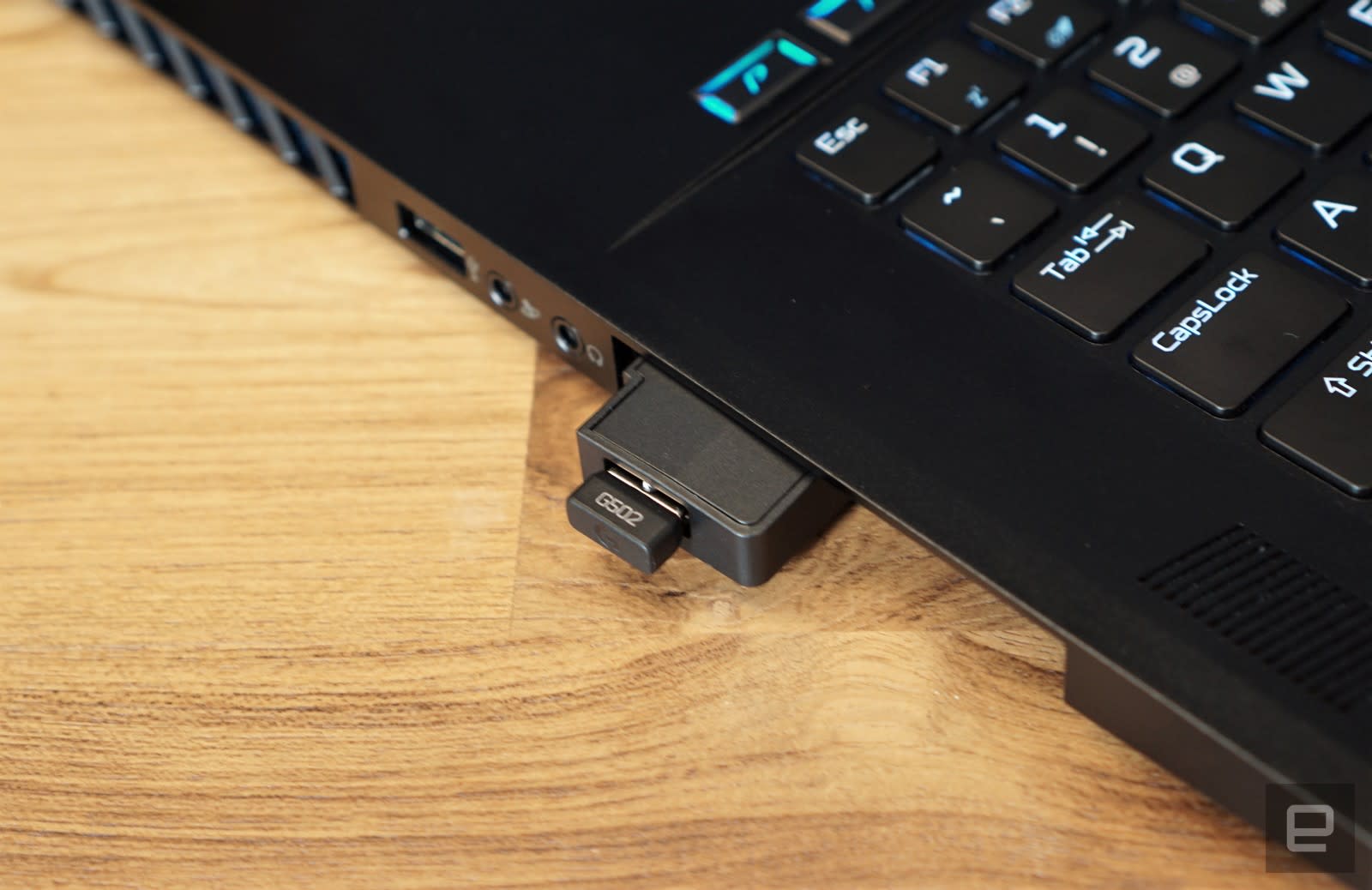 In many ways, the Triton 900 is a machine filled with baffling decisions. What's up with that annoying keyboard layout? And why does it need to take up precious case space for a flip out USB port for Xbox controllers? Are gamers that annoyed by plugging in an Xbox wireless adapter? At least it offers a wide variety of other ports, including two USB Type A slots on each side, two USB-C connections, Ethernet, DisplayPort and HDMI.

Simply put, Acer went to great lengths to create a unique and pricey gaming laptop that doesn't seem like it's meant for anybody in particular. It's similar to a few other curiosities we've seen this year, like Alienware's Area 51m, which gives you desktop-like customizability, and ASUS's ROG Mothership, which is more like a portable all-in-one PC than a laptop. It's not like Acer packed in more battery life than the competition either, I only clocked an hour of video playback before the Triton died. 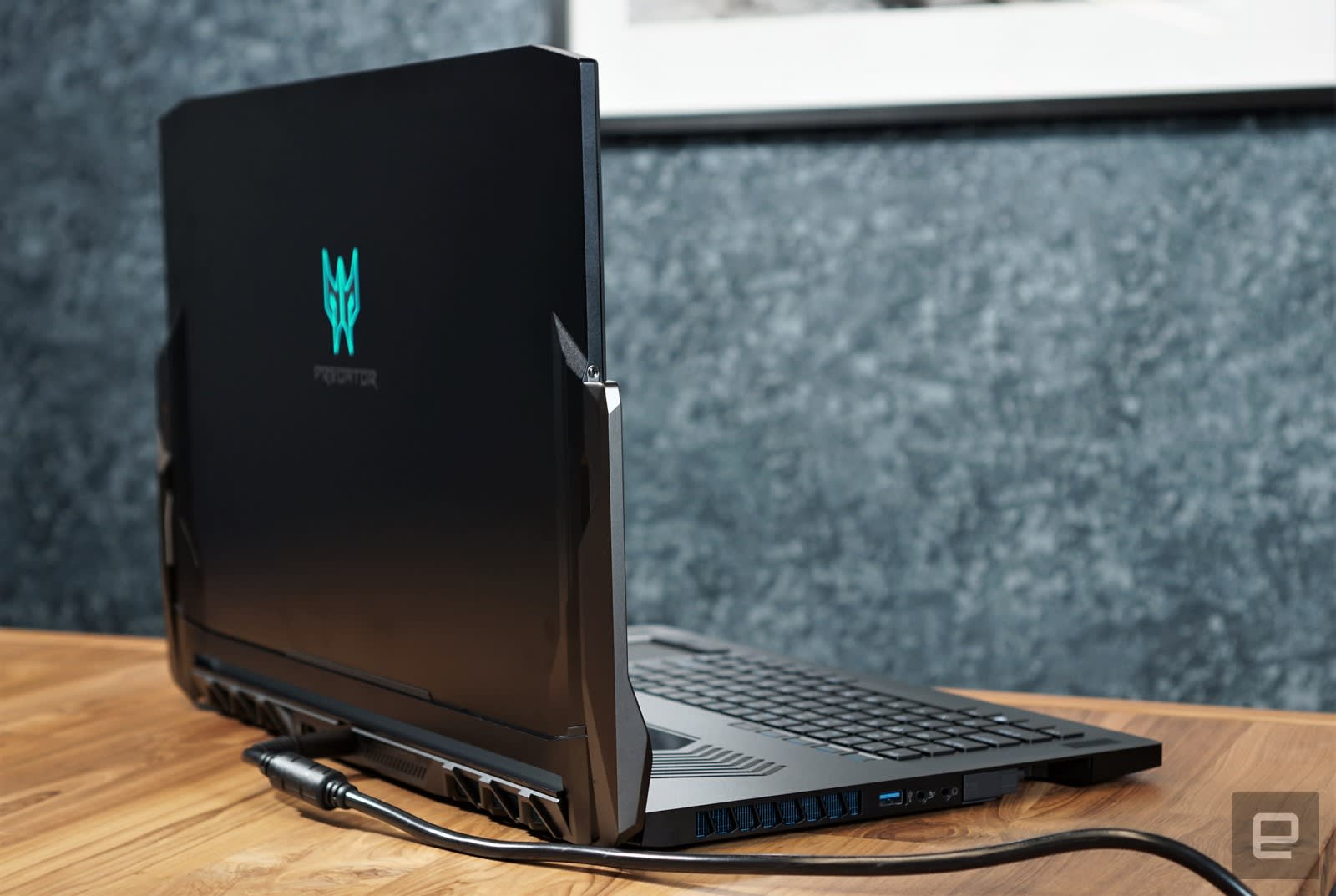 It makes sense that laptop makers are going all out with their machines this year. The hardware is faster than ever, and there's an endless road of possibilities ahead for notebook designs. But when it comes to the Predator Triton 900, Acer forgot that you can't just make something that's cool and powerful -- it also has to have a purpose.