With last year's Aero 15X, Gigabyte managed an impressive feat: putting powerful gaming performance and long battery life into a 4.4-pound body. This year, the Taiwanese company is trying to top itself with the Aero 15 Y9, its new flagship laptop. Weighing just a bit more at 4.5 pounds, it's now equipped with top-of-the-line components: an Intel i9-8950HK 6-core CPU and NVIDIA's RTX 2080 Max-Q GPU.

The latter component has become rather controversial. NVIDIA revealed that the portable Max-Q version, while packing the same Turing Tu104 chip, is underclocked by up to half that of the desktop RTX 2080 GPU. It comes in an 80-Watt version with a 735-1,095MHz core clock and a faster, more power-hungry 90-Watt variant that runs at 990-1,230MHz. The desktop RTX 2080, meanwhile, runs at 1,515-1,710MHz -- over double that of the lower-powered Max-Q version.

So performance and battery life depend on which chip the manufacturer uses and how much it's overclocked, which brings us back to the Aero 15 Y9. It's the first RTX 2080 Max-Q laptop we've tested, so I was interested to see how Gigabyte handled it. The good news is that performance is definitely better. But it's not that great a leap and, unfortunately, it's much costlier. Some of the other defining qualities of the last Aero have been lost, too.

Last year, NVIDIA CEO Jensen Huang held up the original Aero 15X as an example of what manufacturers could do with its Max-Q graphics, kickstarting a boom in lightweight, thin-but-powerful gaming laptops. This year, he wielded the Aero 15Y. It's still just 19 mm thick, but slightly heavier at 4.5 pounds. That's still pretty impressive considering the new internal parts.

The only RTX 2080 Max-Q model that's lighter is MSI's 4.2 pound GS65 Stealth. However, that laptop has a smaller battery, and as you'll soon find out, that makes a big difference. HP's Omen 15 packs an RTX 2070 Max-Q and weighs 5.2 pounds, Alienware's m15 weighs 4.8 pounds, while ASUS's ROG Zephyrus S, with RTX 2080 Max-Q graphics, weighs just a touch more at 4.6 pounds. None of those weights include the often heavy power brick, of course.

Otherwise, the Gigabyte Aero 15 Y9 has exactly the same low-profile design as the last model, with just a triangular textured area as a nod to its gaming genes. It has tiny bezels, making the laptop smaller than its 15.6-inch screen would suggest, and easily fits into the rear pouch of my Peak Design messenger bag. 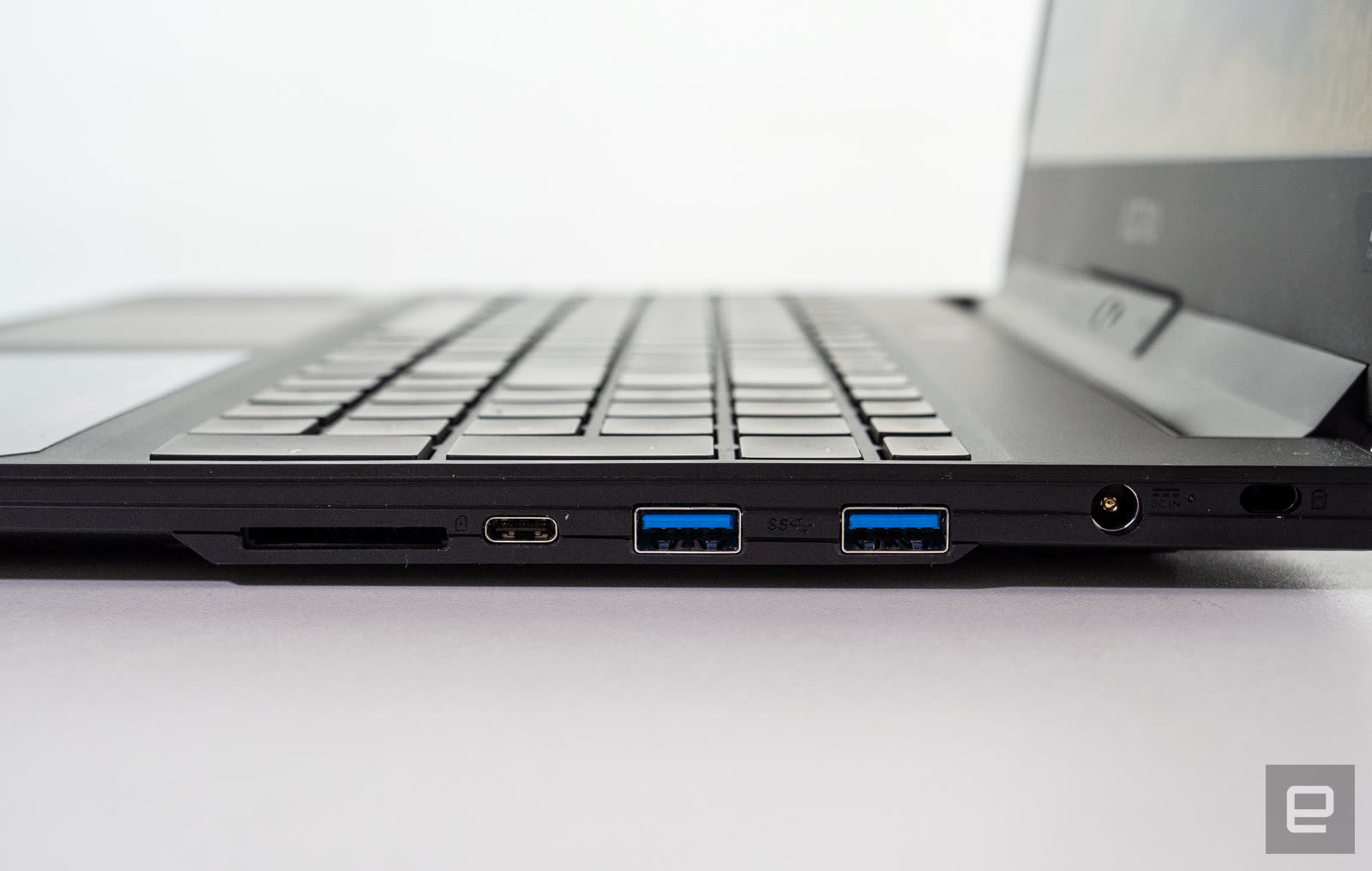 The company was wise not to change; the Aero 15X's design looks smart and won't be out of place at any office or production house, either. I liked the last model enough to purchase one myself.

However, the new Aero 15 Y9 also packs DisplayPort 1.4 over USB Type-C, rather than a standalone mini DisplayPort like the Aero 15X. Data speeds are the same, but I had to buy a new cable (USB Type-C to DisplayPort 1.4) to get the best performance out of my HDR display. It's worth mentioning that all these ports run at their rated speeds (I checked), which is not always the case with laptops.

Because of the low-key design and high-end components, the Aero 15 Y9 is equally well-suited to gaming and content creation. To be sure, the model I tested had top-drawer specs. It packs a six-core Intel Core i9-8950H CPU, 2TB Intel 760p NVMe SSD, 32GB of RAM (upgradeable to 64GB), NVIDIA RTX 2080 Max-Q graphics, a 94 Wh battery and a 4K 60Hz display. Gigabyte will eventually release a similar model with a 1080p 144Hz screen that will no doubt be more suitable for gaming and have a (much) longer battery life. 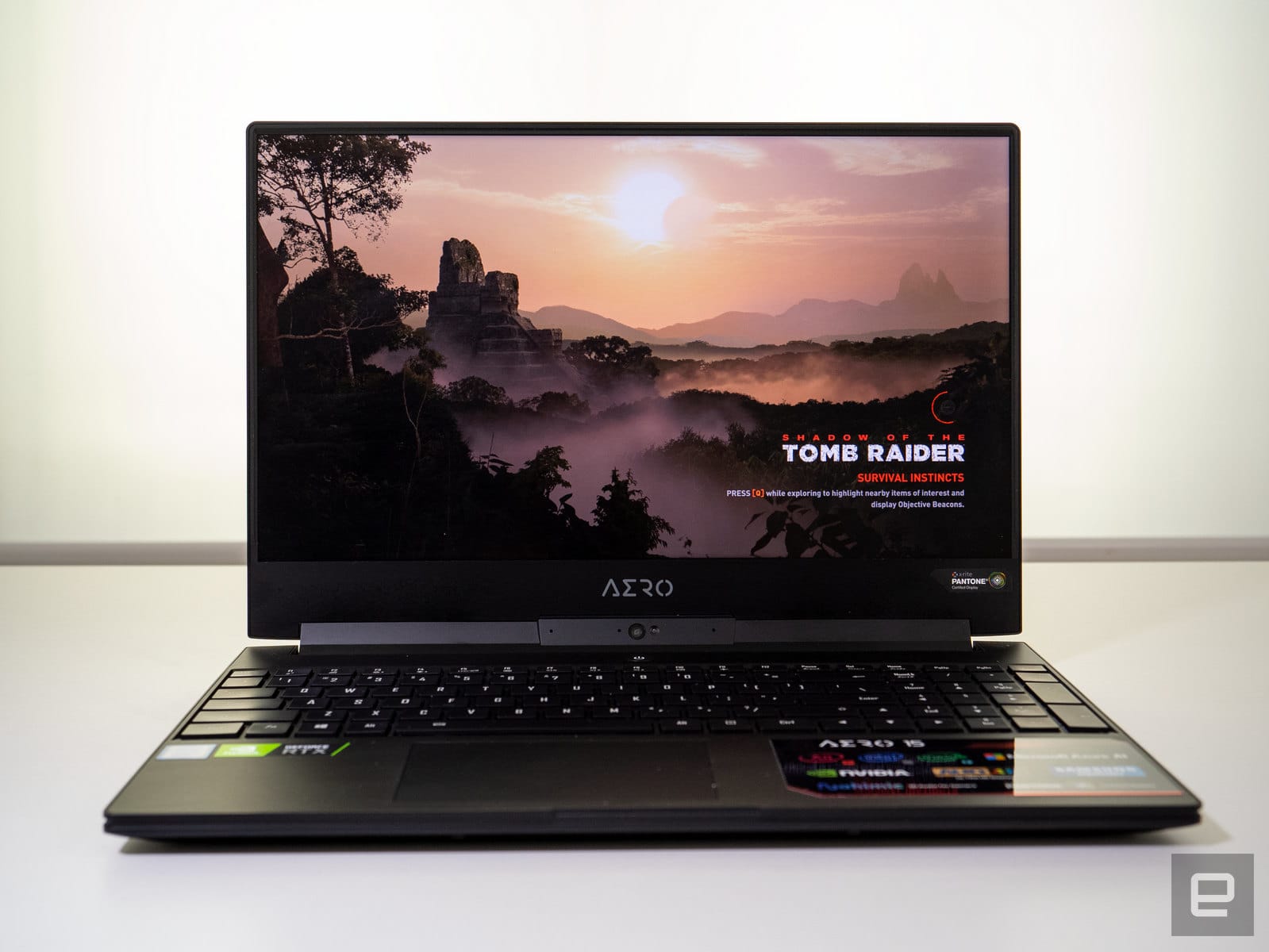 While gaming in 4K, I consistently saw speeds of 29 fps on Shadow of the Tomb Raider with graphics settings on "highest." I achieved similar results with Hitman 2, and subjectively, both games played fairly smoothly with little stuttering or tearing. At 1080p with the same settings, both games hit 60 fps, maxing out the sync rate on the laptop's display. That's not bad, but is about 33 percent less than the 45 fps you can get at 4K with the desktop RTX 2080 card. The GTX 1080 Max-Q can run the same benchmark at around 22 fps, so the RTX 2080 Max-Q is about 30 percent faster.

The most notable new feature other than the hardware is AI Gaming+ & Professional+. When you game or run graphics software, it uses cloud-powered AI (either from Gigabyte or Microsoft's Azure) to adjust the performance and computer-fan speeds to optimize gaming frame rates. In practice, running the Shadow of the Tomb Raider benchmark, I found it increased 4K frame rates by a single frame or two per second in either mode.

There's no way to control it, only run it in "edge" (Gigabyte), "cloud" (Microsoft) or disabled mode. Given the minor performance gains, it wasn't particularly useful. However, it's supposed to learn and get smarter over time, so perhaps it'll improve down the road.

As for the vaunted ray-tracing (RT), I was only able to use it on one game: Battlefield V. You nee a very specific PC setup that includes the latest version of Windows 10 (build 1806) and recent NVIDIA drivers. I'm all about the pretty graphics, and ray-tracing does deliver -- at times -- with reflections, realistic lighting and more atmospheric gameplay. A recent NVIDIA patch delivers improved RT performance on Battlefield V, and I found I could game smoothly at 1080p and below. At 4K, there was quite a bit of stuttering and lag with the feature enabled, unfortunately.

Gigabyte, like many laptop makers, uses NVIDIA's Optimus system, which switches between the Intel Iris 630 and discrete graphics to balance performance and battery life. If you use your laptop with an external monitor via the HDMI or DisplayPort, it will be powered exclusively by the NVIDIA graphics. That means you can hook up an external monitor with a higher refresh rate and benefit from better speeds and features like HDR and NVIDIA's G-SYNC.

The 4K AUO screen is pretty nice. It covers 100 percent of the Adobe RGB gamut and is factory calibrated using Pantone settings. I found it worked well for watching movies, gaming and content creation with accurate colors. However, unlike upcoming OLED screen models from Dell and HP, it can't handle HDR. At 283 nits, the display is moderately, but not incredibly, bright. Still, if you love 4K resolution, like me, Netflix films and games looked incredibly sharp, and color-wise, everything was nice and punchy.

Apart from the higher-resolution display, the GPU is another attractive element for video editors and graphics pros. The RTX 2080 is the first NVIDIA GPU to support full RGB 4K 10-bit H.265 HEVC decoding, which should eventually make YouTube playback and H.265 video editing smoother.

NVIDIA also joined forces with RED to support playback of 8K video files, which will make video editing and effects a lot less of a pain. I tried downloading one myself (courtesy of Phil Holland), along with RED's Redcine X, and can confirm that I was able to play a full-fat 8K RED video clip, which is slightly insane on a laptop. 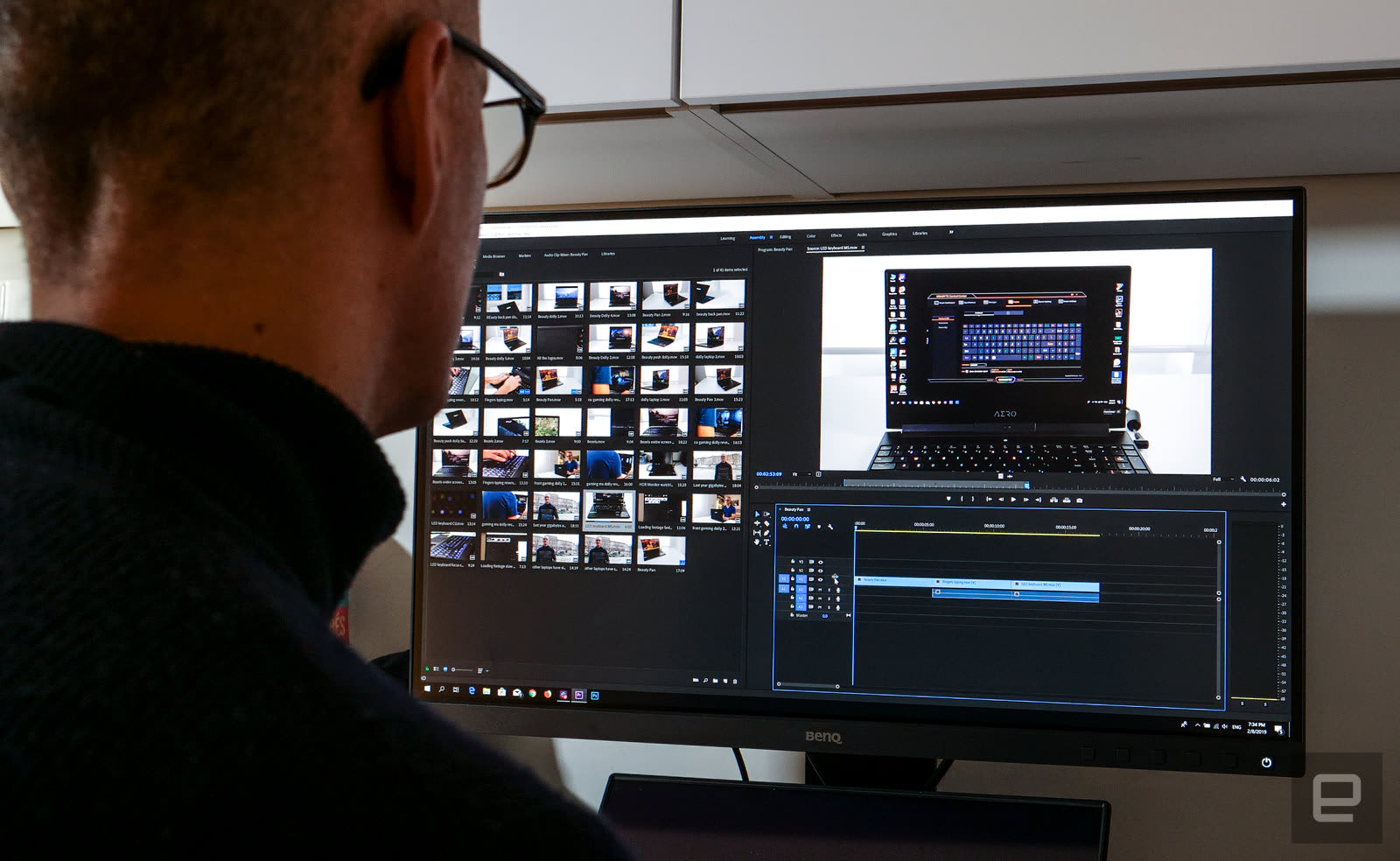 It also felt a lot faster than my similarly equipped Aero 15X for video editing. I shot this video in 10-bit 4K and exported the color corrected clips at 1080p faster than in real time. Exports in general seemed a lot faster than on my GTX 1080 Max-Q Aero 15X laptop, and for video pros, that's a huge time-saver. It also fairly flew for displaying and rendering 3D animations using Autodesk's 3DS Max software.

The Aero 15 Y9 got slightly less hot than my Aero 15X, aided by the dual fans that duct air down and away. I was able to set it on my lap during gaming sessions, and it never got uncomfortably warm. The new model was also slightly quieter, with fan noise reduced except for the most challenging gaming and graphics rendering tasks.

As for typing and mousing, I liked the keyboard on my Aero 15X, so I'm pleased that it hasn't changed on the new model. Gigabyte did fix the trackpad, thankfully, and it was less stiff and more accurate than the one before. It's actually pretty good now, and unfortunately, that's more than you can say for most Windows laptops.

In our battery rundown tests, in which an HD video was looped until power ran out, the Aero 15 Y9 ran for three and a half hours. While that might seem sad next to the previous model, which lasted for nearly eight hours, it's typical for laptops with 4K displays. Calculating and pushing quadruple the pixels takes a great toll on battery life, and the screens hog a lot of power. As mentioned, Gigabyte will soon release a 1080p version with a much faster 144Hz refresh rate version of the Aero 15 Y9, and it should last a lot longer on a single charge.

Rather than using Dolby Atmos for audio, like before, the latest model features Nahimic 3D audio for gamers. That won't make a huge difference, as Dolby Atmos on laptops is nothing like it is on a true home-theater system -- it's more about branding than anything else. The two-watt external speakers still pack tin-can quality, with bass just a distant dream. 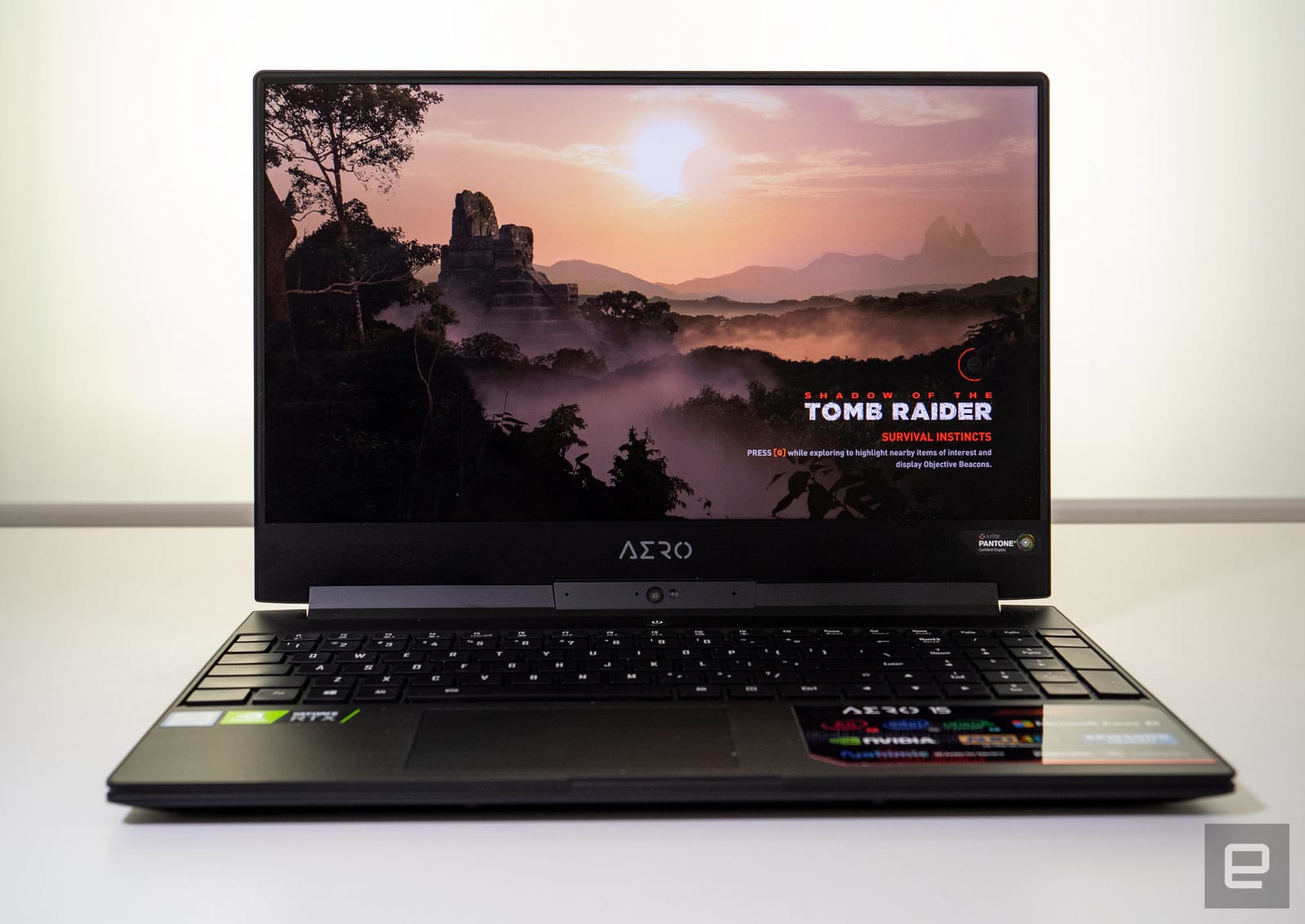 As you might expect given the components, the Aero 15 Y9 is expensive. If you wanted the same loadout that I've tested, it will cost you $3,999, while the base version of the Aero 15 Y9, with a 144Hz 1080p display, 16GB of RAM and a 1TB NVMe SSD is $2,700. Those sums are beyond the means of most gamers, but in reach for many content creators who earn a living with their computers.

With prices like that, the Gigabyte Aero 15 series is clearly not for everyone. However, it's competitive against other RTX models like Razer's new Blade model, which starts at $2,999 with an RTX 2080 Max-Q GPU and will probably be about the same as the Aero 15 Y9 with similar components. Other models from Dell, Alienware, ASUS and MSI will likely fall in that range, as this has become an ultra-competitive category. 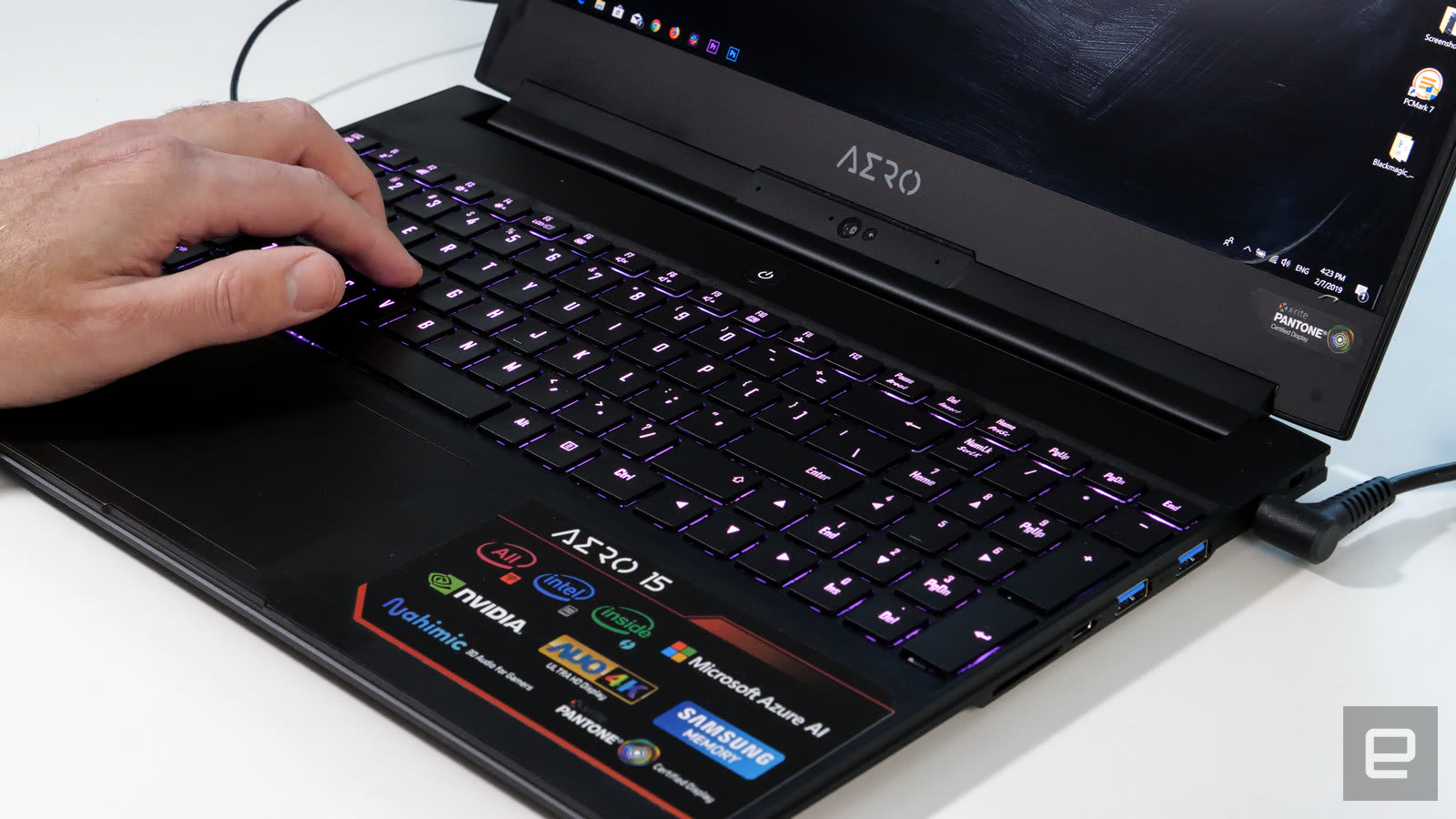 As the first RTX 2080 Max-Q notebook we've had a chance to review, Gigabyte's Aero 15 Y9 really showed us the best -- and worst -- of modern gaming laptops. On one hand, it's awesome that I can get so much power in a portable device, letting me game, watch movies and work wherever I go. However, the pricing keeps going up and the performance gains are getting smaller and smaller. We've now reached a point where we're quibbling over a feature like ray-tracing, which only works on one single game.

That's not Gigabyte's fault, though. It took the components it had and made a well-designed, fast and lightweight laptop that can grind through the most challenging games and content-creation chores. The company made it even better with tweaks to the touchpad and elsewhere, and the only shortcoming in this particular model (or any 4K laptop) is the battery life. It's also costly, but again, the price should hold up to rivals. Overall, the Aero 15 Y9 is an easy laptop to recommend.

All products recommended by Engadget are selected by our editorial team, independent of our parent company. Some of our stories include affiliate links. If you buy something through one of these links, we may earn an affiliate commission. All prices are correct at the time of publishing.
Gigabyte Aero 15 Y9 review: RTX 2080 performance, at a price
Aero15Y9
Gaming
gear
Gigabyte
gigabyte aero 15 79
Laptop
Lightweight
Max-Q
nvidia
nvidia rtx 2080
personal computing
personalcomputing
review
RTX2080