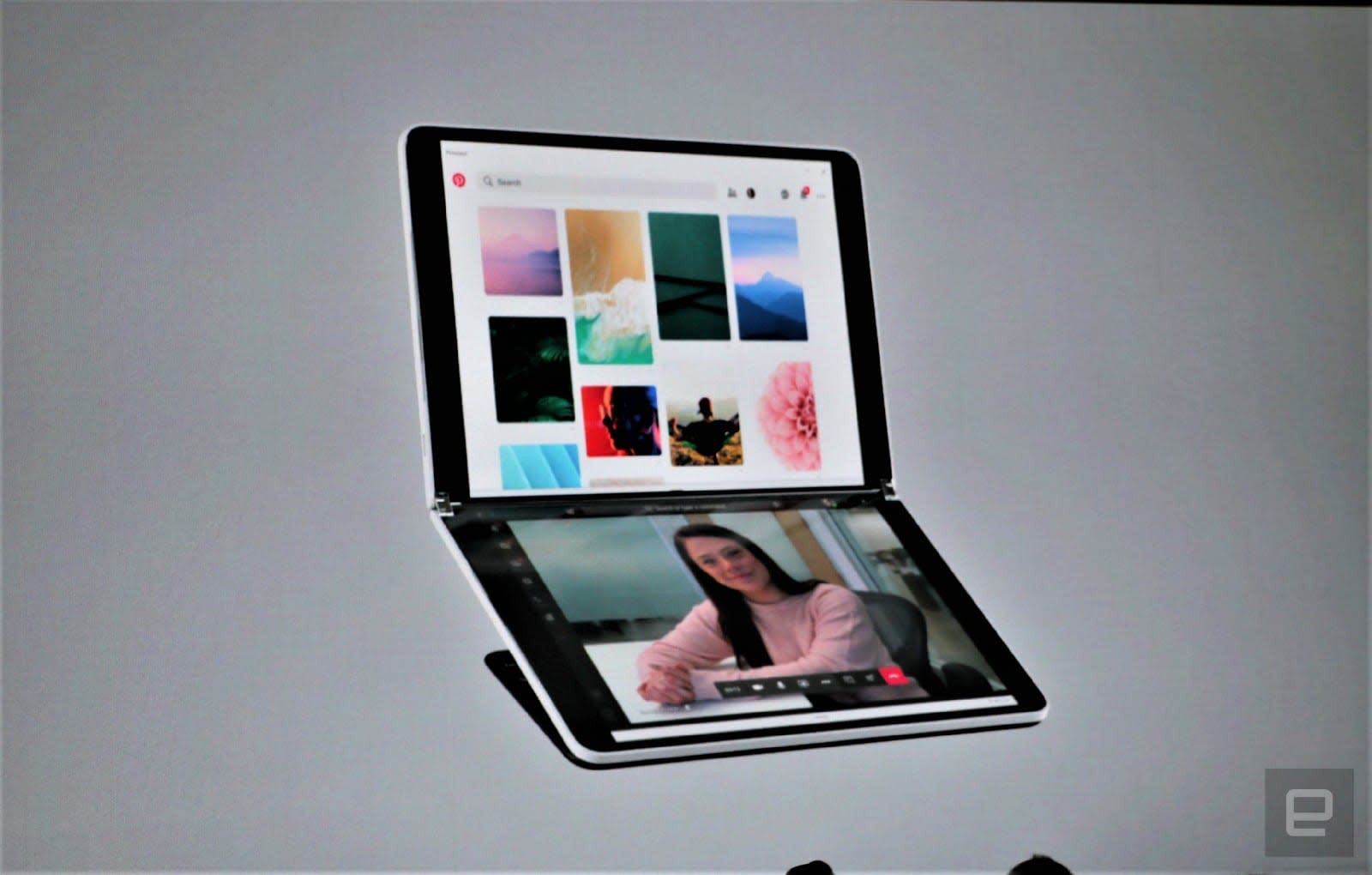 Just how, exactly, will Windows work on dual-screen PCs like Microsoft's Surface concept? With Windows 10X, a new variant of the OS that's designed for machines with two displays. This isn't like Windows 10S, Microsoft's ill-fated and restrictive variant for the Surface Laptop (which has since become far more relaxed). Instead, 10X is more like a rethinking of the OS -- it'll be smarter about how you move apps across dual displays, and it'll be much more efficient with system resources. Exactly what you'll need to conserve battery life when you're running a thin machine with two displays.

Microsoft's dual-screen Surface, naturally, will be the Windows 10X flagship -- but it'll have some company from Dell, HP, Lenovo and ASUS. They'll all have multi-display PCs of their own coming during the 2020 holiday season. ASUS showed off its Project Precog concept last year; Lenovo has said its next Yoga Book will feature two screens; and I've also seen Dell's prototype devices during a closed door demo at Computex. If the ZenBook Pro Duo didn't make this clear already, dual-screen PCs are real, and they're coming.

"We are designing dual-screen PCs to be productivity enabling experiences," Glen Robson, Dell's CTO of Client Solutions, said in a blog post. "Users will be able to complete multiple tasks more efficiently and seamlessly. For example, artists and architects will be able to create on one screen, while referencing photographs on another. You'll be able to take notes on one screen, while the other shows the slides on a video call; or use one for composing an email, while another shows the spreadsheets you're pulling data from."

As Microsoft describes it, Windows 10X is a more modularized version of the OS, which gives the company much more control over how it performs. For example, the subsystem for Win32 apps, which is always running on Windows 10 PCs, doesn't start up in 10X until you launch an older Win32 program. While it's unclear what sort of resources that'll save in the long run, every little bit helps when you're running two screens. (Those Win32 apps also need to be from trusted or verifiable sources to run, which might cause some issues with more esoteric software. We're hearing that
most software you find on major download sites should be fine, but this limitation could hinder tinkerers.)

You can also expect to see a more touch friendly Start menu in Windows 10X. That's something Microsoft sort of attempted with the Windows 8 Start screen, but that implementation was widely detested, essentially forcing the company to bring back a more traditional menu in Windows 10. The 10X Start menu is more of a finger-friendly evolution on the current version. It's not just a long list next to a few icons. The new Start menu will also shift seamlessly across both screens, which should avoid the problem you see on dual-monitor systems, where it usually lives awkwardly on one screen.

Of course, there are still plenty of reasons to be skeptical about dual-screen PCs. We've gotten used to virtual keyboards on phones, but they'll never be a genuine replacement for traditional keyboards. What good will a device with two screens be if it's a pain to type on? I suppose there's always room for accessories. And maybe when we're living in a future like the film Her, where our voices can handle all of our input needs, we'll look think of keyboards as being as archaic as the abacus. But that world sure seems a long way off.

We're hearing that Windows 10X is also being built with a variety of dual-screen device sizes in mind. So while first product, the Surface Neo, looks like Microsoft's long-lost Courier concept, we might larger devices road. As someone who's long pined for that device, it's heartening to see the pieces finally fall in place for the dual-screen PC era.

In this article: dual-screen PCs, gadgetry, gadgets, gear, microsoft, personal computing, personalcomputing, Surface, surface2019, Windows 10X
All products recommended by Engadget are selected by our editorial team, independent of our parent company. Some of our stories include affiliate links. If you buy something through one of these links, we may earn an affiliate commission.