Instagram’s Threads is compelling, but kind of creepy

If I were you, I wouldn’t enable Auto Status.

Look, I'm not one to constantly post selfies. I'd rather just take pictures of random buildings or my sneakers. But, when I do take a selfie, it's mostly just so I can share a goofy face with my family or best friends. I've mentioned this before in previous stories about Facebook, Instagram has become one of my main messaging apps -- right up there with iMessage and WhatsApp. That's why the idea of Instagram's new Threads app, which is designed specifically for private messages between you and your closest friends, sounds so intriguing.

On the surface, Threads is essentially an extension of Instagram's Close Friends feature for Stories, which was introduced in 2018. Close Friends, in case you're not familiar with it, lets you share pictures, videos and message only with groups of people you've carefully selected. In fact, if you haven't created a Close Friends list on Instagram, you'll need to do that the first time you fire up Threads in order to use it. I did not have a Close Friends list, but creating one was fairly easy: you just go through the list of people you're following and choose whomever you want to add.

That step is important because you can only share things with people on that list in Threads. You can send things to all of them at once, or to individual people, but they have to be on that list. For the most part, I picked people I know in real life, since those are the ones I'm most likely to have meaningful, private conversations with. Once you have your list ready, Threads will ask if you want to create shortcuts for up to eight of your closest Close Friends. This puts their profile picture next to the camera shutter button for quick access. (I sort of I wish I had in the main Instagram app.) 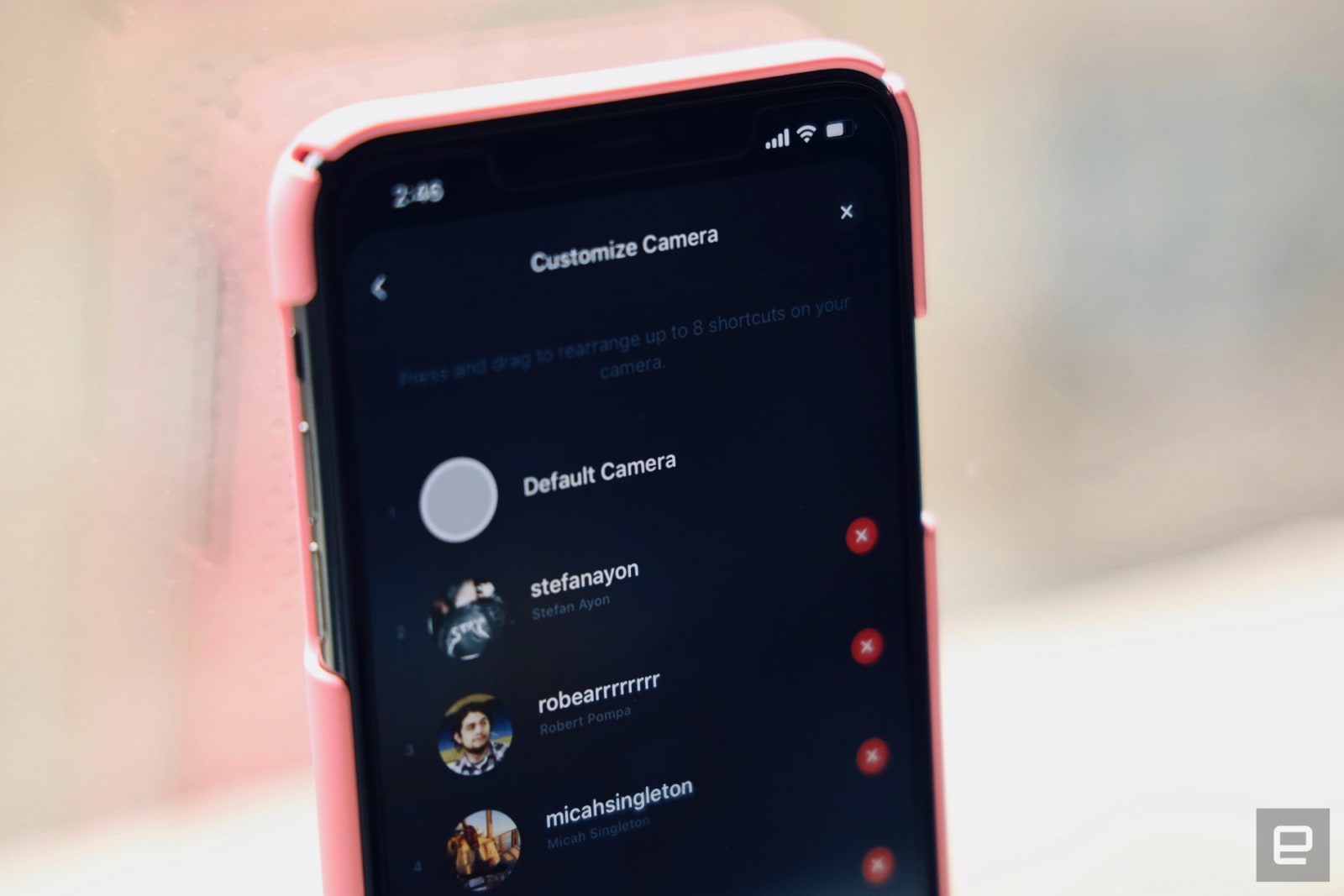 Instagram has billed Threads as a "camera-first" app (it's coming for you again, Snapchat), so right when you open it you go straight into camera mode. Like on Instagram, you can tap the shutter once to take a picture or hold it to record a video. My main instinct after taking a picture was to swipe to add an effect or filter, but you can't do that in Threads. There's no word on whether that staple of Instagram will be coming in the future. For now, all you can do to your photos or video is add text or scribble on them.

From the camera view, the main interface consists of a shutter button, shortcuts and Home. The latter is where you can instantly get a view of all your direct messages, as well as create groups and change settings, including status (more on that shortly), shortcuts and themes. For example, you can choose between dark and light modes for your app.

No matter where you are in Threads though, whether it be Home or your direct messages, you always have easy access to the camera and Close Friends shortcuts. And in your DMs, you can view people's Instagram Stories, but if you want to view their entire profile the app will redirect you to Instagram. That's understandable since Threads is intended to be a messaging app, not another way to browse and like your friends' pictures. 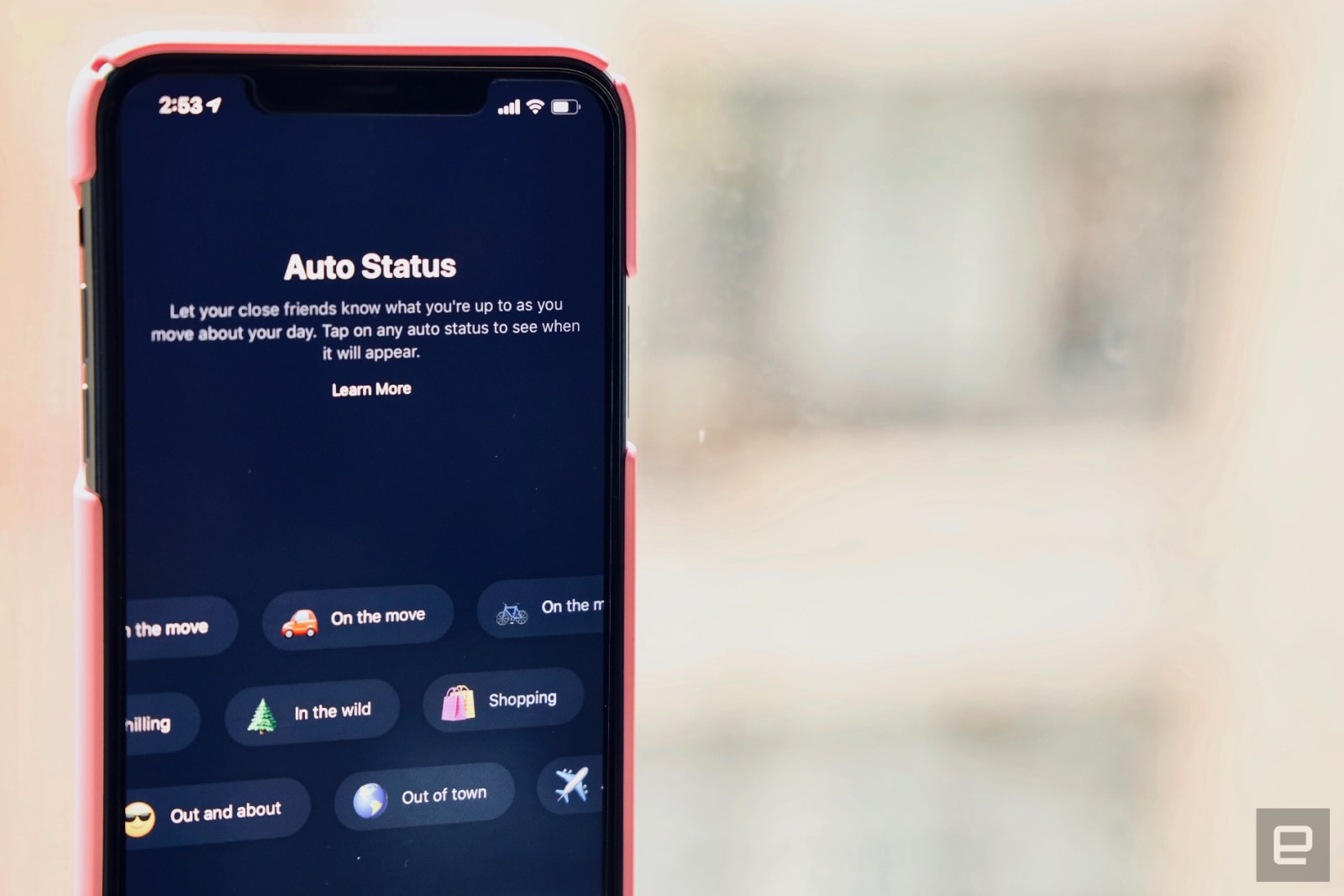 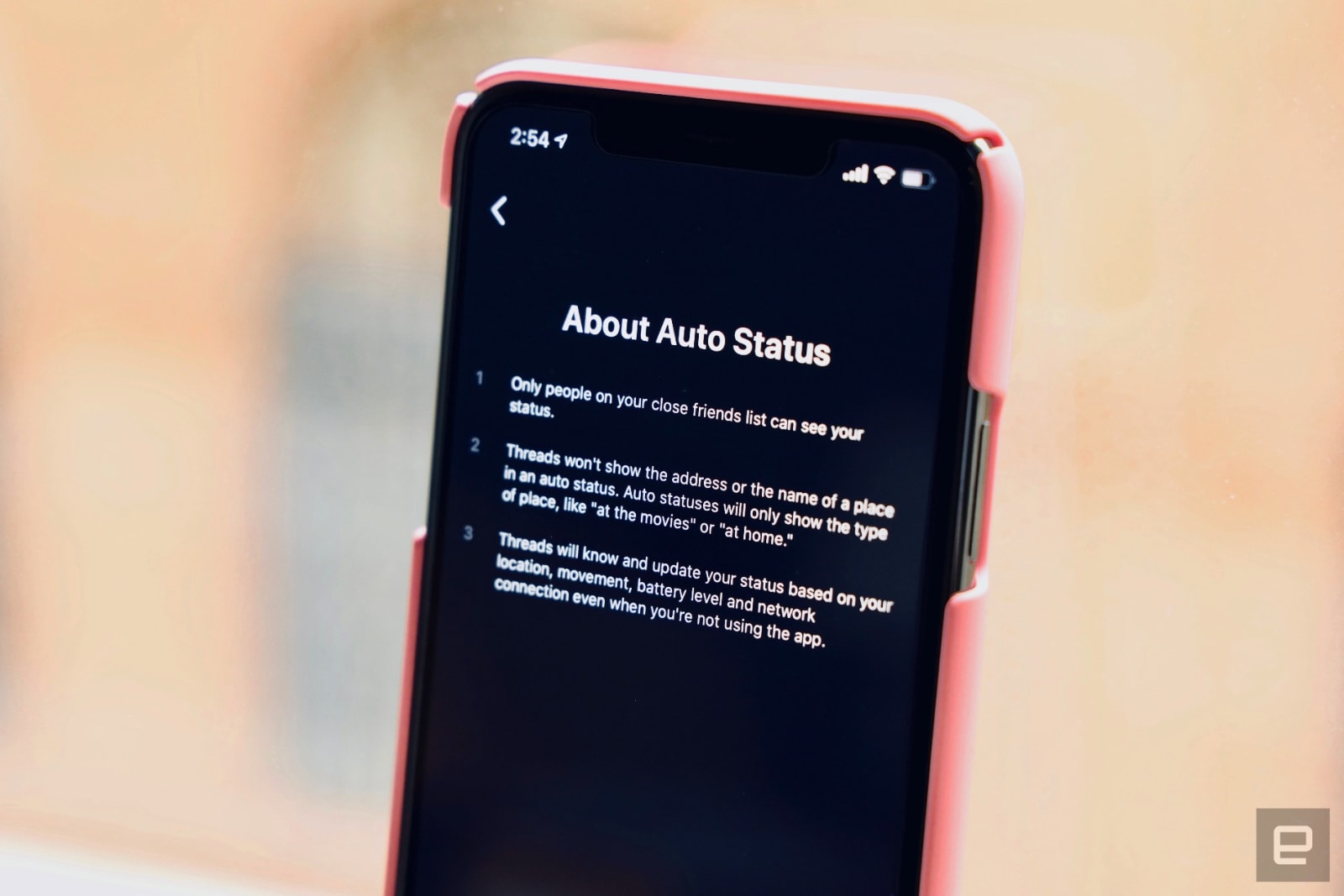 Now let's talk about Auto Status, because while it may be the most intriguing feature of Threads. It's also the creepiest. When you have it on, this will let the app request your smartphone's precise location, movement, battery level and network connection. As Instagram puts it, Auto Status is going to allow it to share "little bits of context on where you are without giving away your coordinates." To give you an idea of how this works in practice, I enabled it to test it out and when I didn't touch my phone for an hour or so, Threads automatically changed my status to "Chilling," which let my Close Friends know I'm basically not up to anything at that moment.

Basically, if you use Auto Status, you're allowing Facebook to know what you're doing 24/7. That said, the feature isn't on by default, meaning you have to opt-in to activate it. Otherwise you can change your Threads status manually. I, for one, turned it on to see if it would work as advertised, which it did, and then turned off as soon as I was done testing. It might be appealing if you really, really want your friends to know what you're up to at all times, it's just not for me.

Adam Mosseri, head of Instagram, said in a Story on Thursday that eventually you'll have the ability to message people across Instagram, Messenger and WhatsApp directly from Threads. That's all part of Mark Zuckerberg's masterplan to make Facebook's family of apps work seamlessly together, and Threads has the potential to be a major part of that. But, Threads is yet another opportunity for Facebook to collect more personal data. And with the company's current reputation, features like Auto Status are likely going to raise some concerns.

At least Facebook isn't making Auto Status an opt-out feature. Still, the mere fact it is willing to put things like this out there shows that, even amid an endless river of privacy-related controversies, the company isn't going to slow down anytime soon. Threads isn't here just to go after Snapchat; it's also here to gather more, a lot more of your personal data -- if you're so willing to give to Facebook, anyway.

All products recommended by Engadget are selected by our editorial team, independent of our parent company. Some of our stories include affiliate links. If you buy something through one of these links, we may earn an affiliate commission. All prices are correct at the time of publishing.
Instagram’s Threads is compelling, but kind of creepy
android
auto status
cameras
close friends
data privacy
direct messages
direct messaging
facebook
gear
instagram
instagram threads
internet
ios
location
mobile
privacy
services
snap
snapchat
social
social media
status
threads