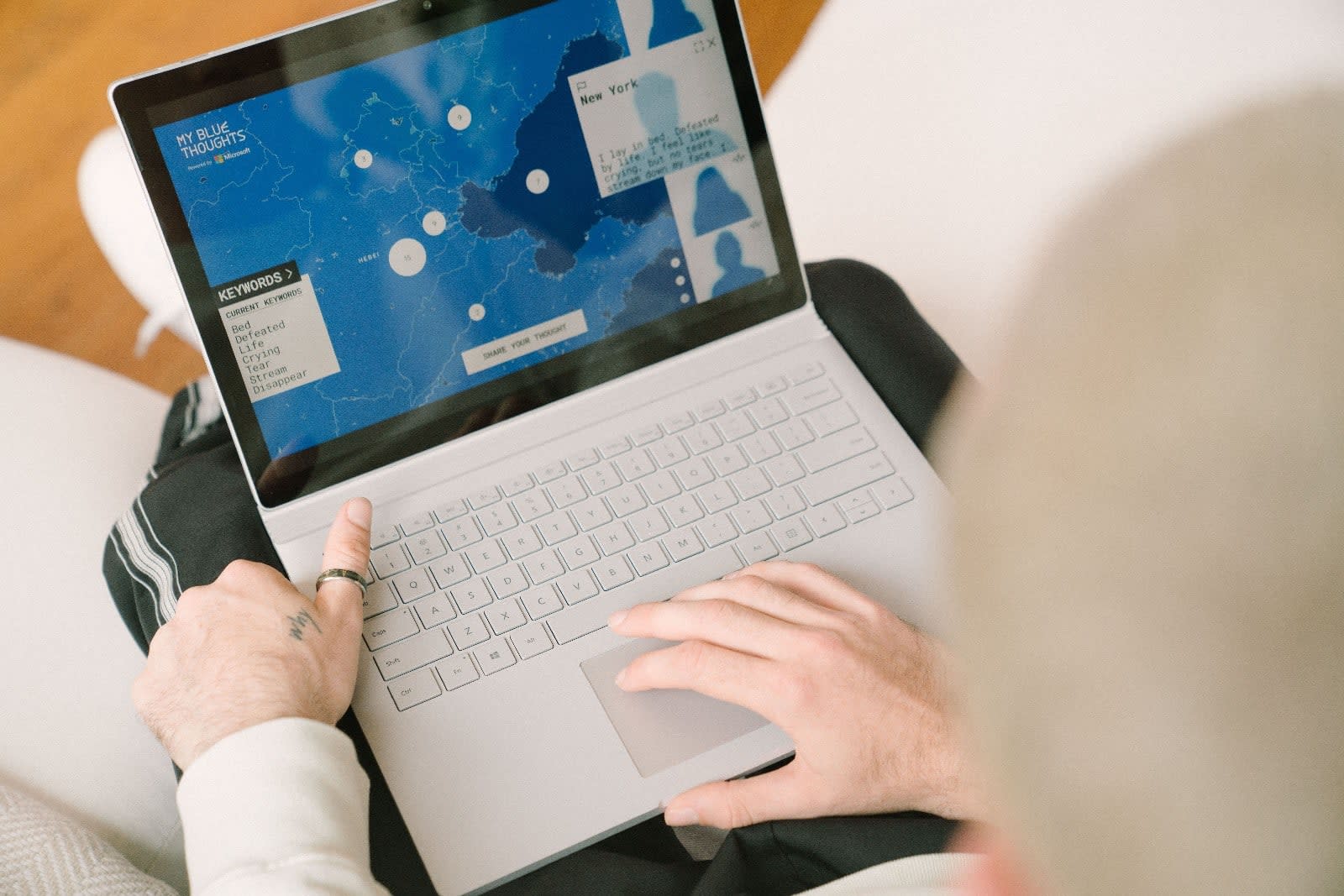 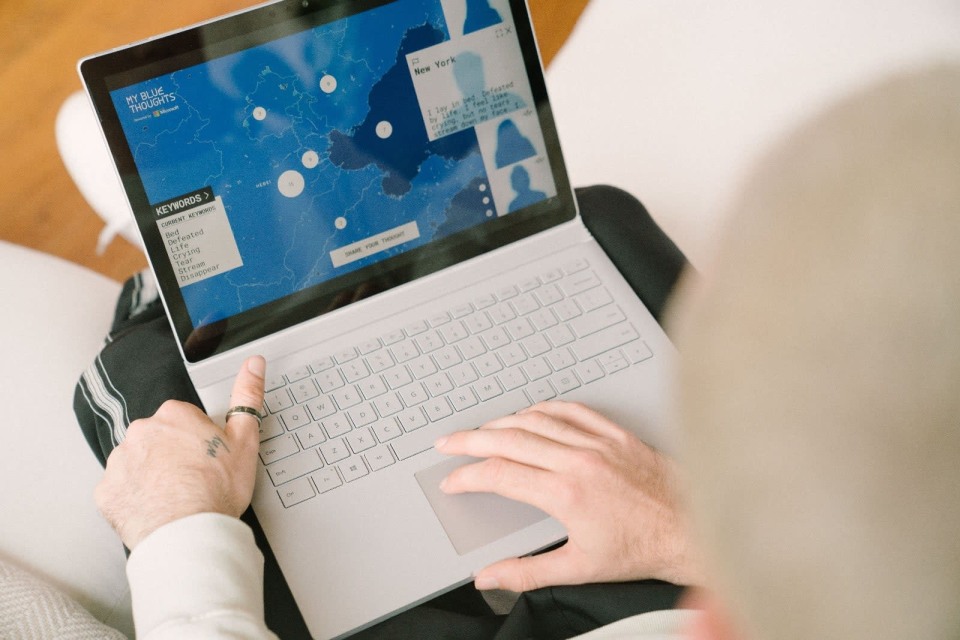 At first glance, the glowing blue booths at musician Lauv's concert could be mistaken for avant garde refrigerators. But the vending machine-sized capsules are actually part of a collaboration between Microsoft and singer-songwriter Lauv called My Blue Thoughts. Two of these booths were set up at the artist's recent October 5th concert in Washington DC, accompanied by two tablets and a sign.

My Blue Thoughts is a concept that started three years ago, when Lauv, whose real name is Ari Leff, installed simple blue boxes at his concerts where attendees could drop pieces of paper with their thoughts. After each concert, Leff (or his team) would share pictures of the collected thoughts to his Instagram. Leff called it his "compassion project," and envisioned it as a way for people to anonymously air what was on their minds. "It's sort of like a non-religious confessional," Leff told Engadget.

This time around, people can enter a private booth and record a 60-second audio clip or write a 1,000-character blurb and take a selfie to go along with their submission. The sign outside the booth calls it a "quiet, safe place to let go of anything on your mind anonymously." To protect identities, voices are distorted and images are silhouetted (in the style of the singer's "Superhero" music video).

Microsoft enables the transcription, anonymizing and collection of these posts. These are then displayed on Lauv's website, which was relaunched today with Microsoft to coincide with World Mental Health Day. "For us at Microsoft, it was really an amazing opportunity to work with somebody who is so open about mental health and the need for people to understand," said Amy Sorokas, director of strategic partnerships. "It was exciting to get involved in to help figure out how we could increase awareness and amplify the message."

Getting your deepest thoughts off your chest is only half of the process. The other part is seeing what others have said and learning you are not alone in feeling the way you do. That's where the website comes in. The home page opens on a map of the world with circles showing the number of thoughts shared in each region (including a locale in the middle of the ocean called Lauv Island). You can search for specific keywords and find relevant submissions. Looking up "sad" yielded 45 thoughts, for instance, while "love" returned 192. You can also share your own thoughts through the site.

It's surprising how candid people have been thus far. Through the thousands of thoughts on the site, people have aired feelings like fear of coming out to an abusive family, guilt over a breakup, sadness over loss of a support system or regret from unfulfilled ambitions. One recent post, for example, states "These last few years I've felt like a failure... I just don't know how to get back up, and feel happy with myself again."

Even though the word "sad" isn't explicitly written in this submission, Microsoft's AI has tagged it with the keywords "failure" and "sad." The system will also tag the voice entries with keywords, scanning the clips to recognize specific terms, as long as the user spoke in one of the 16 supported languages. Unfortunately, the clips collected so far were mostly so distorted I couldn't make out what was being said. Still, I was content looking at just the text entries -- they were easier to browse anyway.

It might seem strange that people would share such intimate thoughts at a concert, but Lauv says it's pretty common. Even with the earlier version of My Blue Thoughts, he said, "People really open up." But some fans just have fun with it. "Sometimes they write 'chicken tenders'."

Thankfully, that example isn't more offensive or disturbing. To keep malicious content or trollers from sullying the spirit of My Blue Thoughts, Microsoft put in place a Content Moderator that scans for profanities, and Leff's team has the ability to remove inappropriate submissions.

It might not seem like simply recording and sharing your troubles with the world and scrolling through endless submissions from strangers is the most effective strategy for improving mental health. But for some, the simple acts of putting their thoughts down and reading about another person going through the same thing are small comforts.

"For me, music was my place to kind of confront my own emotions," Leff said. "I sit down and hit on a piano or guitar, and whatever subconsciously comes out is like, 'Okay, wow, like shit, that's what I feel.'" So he wanted to create an outlet for people who might not have similar creative outlets and give them that opportunity when they attend one of his concerts.

Other artists' performances might feature laser projections and augmented reality holograms, creating visual spectacles to distract and entertain. Compared to those efforts, My Blue Thoughts' tech crossover seems relatively low-tech. But when it comes to mental health, maybe something quiet and distraction-free is more appropriate.

Leff's music, with titles like "fuck I'm lonely," "I'm so tired" and "Sad Forever," has never shied away from the issues of emotions and mental health. The artist has been vocal about the importance of mental health and started The Blue Boy Foundation to raise money to help young people access relevant resources.

His personal experience also shaped his attitude towards mental health issues. "My dad was really depressed for a long time. And I was a little kid, and it was really hard," he said. Music-making helped him confront and process his feelings, but it was when he began sharing that things felt more meaningful. "The more I was open and shared with my friends and our music, the more I felt like it was a rewarding human experience."

"I have always taken the approach of being as open as I can," Leff said. Indeed, his Instagram feed paints a picture of a person who is often cheerful and upbeat, yet at times shares about feeling numb and creatively stifled. In these posts, he opens up the conversation to his followers, asking if they've felt the same and how they've dealt.

In this way, Leff is using social media and his revamped website to connect with his fans on the topic of mental health. Though, the internet can be a double-edged sword; it is often the cause of many people's troubles. "So much of the internet is sort of like this false reality that people want to portray," Leff said. He sees My Blue Thoughts as a more authentic zone. "I think it's cool to have a place where they can actually share really what's going on."

While Leff's fans may be more open to the concept of being in touch with their emotions, he wants to reach more people. "I have hopes that this is the kind of thing that could reach beyond my fan base (and) reach some type of critical mass," he said. On a larger scale, My Blue Thoughts could gain the recognition and pop culture cache to become the Postsecrets of the Instagram generation or an online confessional for the youth.

In this article: ai, art, av, entertainment, lauv, mental health, microsoft
All products recommended by Engadget are selected by our editorial team, independent of our parent company. Some of our stories include affiliate links. If you buy something through one of these links, we may earn an affiliate commission.