Small smart speakers, like the Google Home Mini and Amazon's Echo Dot, aren't usually designed to deliver great sound. They're typically an inexpensive way to get a digital assistant in your home, so audio quality is often neglected. With the new Nest Mini, though, Google actually made sound a priority, using its software expertise to compensate for hardware limits. After all, there's only so much you can do with a $49 puck-sized speaker.

But the company was able to noticeably improve its small speaker's audio, and it understandably isn't sharing all its secrets to better sound in a small chamber. But Google Nest product manager for smart speakers Chris Chan told me that the Nest Mini was the result of "intense collaboration" between hardware and software teams. "We integrated completely custom audio processing software to ensure all the layers from driver to ear were as balanced, natural and clear as possible," he said.

Basically, Google developed proprietary tuning software for the Nest Mini, which has 360-degree 40mm drivers that are very similar to the Home Mini. Chan said the tuning software will be part of all hardware moving forward. That's good news, because from what I heard, music from the speaker was surprisingly luxurious for something this small and affordable.

Chan said his team focused on three things when designing the Mini -- fullness, clarity and authenticity of sound. The first refers to representing all ranges of audio in a balanced way, whether it's bass, mids or highs. He played Boys by Lizzo to showcase the complete range of sound. I could clearly make out instruments in the high range behind Lizzo's voice, and the bass was satisfyingly strong. In fact, the Nest Mini has two times stronger bass than its predecessor, Chan said.

To demonstrate the Nest Mini's ability to deliver clear sound, Chan picked Slow Burn by Kacey Musgraves, pointing out that we could still hear the imperfections in the guitar and her voice. He also played Feels by Calvin Harris, which was meant to be an example of the Nest Mini renders music in a "natural" or "authentic" manner. According to Chan, this third principle is about making sure the speaker delivers audio that's "close to what a producer intended out of the studio." I don't really know what Calvin Harris wanted Feels to sound like, but I couldn't hear any artifacts, distortion or an unnatural emphasis on any frequencies that you might encounter with a lower-quality speaker.

I requested one of my most-played songs, Starboy by The Weeknd, so I could compare the output to my own speakers and was pleasantly surprised. The Nest Mini had more distinct vocals and clearer sound than my Google Home, and sounded similar to my Echo (2nd gen). That's especially impressive if you consider the Nest Mini is half the price of those devices and about a third the size. Of course, it also matters what volume you play your music at. Chan said since most people tend to set their speakers at level six or seven out of ten, that's the loudness that Google optimized the Nest Mini's sound for. I typically listen to my Echo at about volume six from a few feet away, while I sat in front of the Nest Mini during my demo, barely an arm's length away, which could at least partially account for the similarities in my experience.

Still, I was impressed by what Google was able to achieve without changing much of the Mini's hardware. The exterior looks pretty much exactly the same as before, save for a wall mount carved into the underside. With this, you can put a screw in your wall and hook the speaker up wherever you need. The audio quality will be minimally affected, since the speaker fires upward. There's also a new power socket, instead of the microUSB slot from before, and one more far-field mic than the two previously.

The fabric that covers the Nest Mini's top is made out of recycled plastic bottles, while the external enclosure is composed of 35 percent recycled plastic as well. This isn't something you'll immediately notice, but it does mean that you can feel a little less guilty about buying more of these to stick in all the corners of your home. You might be more taken by the new color option, though. There's a new blue variant called Sky, in addition to the existing white, black and pink versions (Chalk, Charcoal and Coral, respectively). It's a deeper, less-green hue than the previous Aqua. 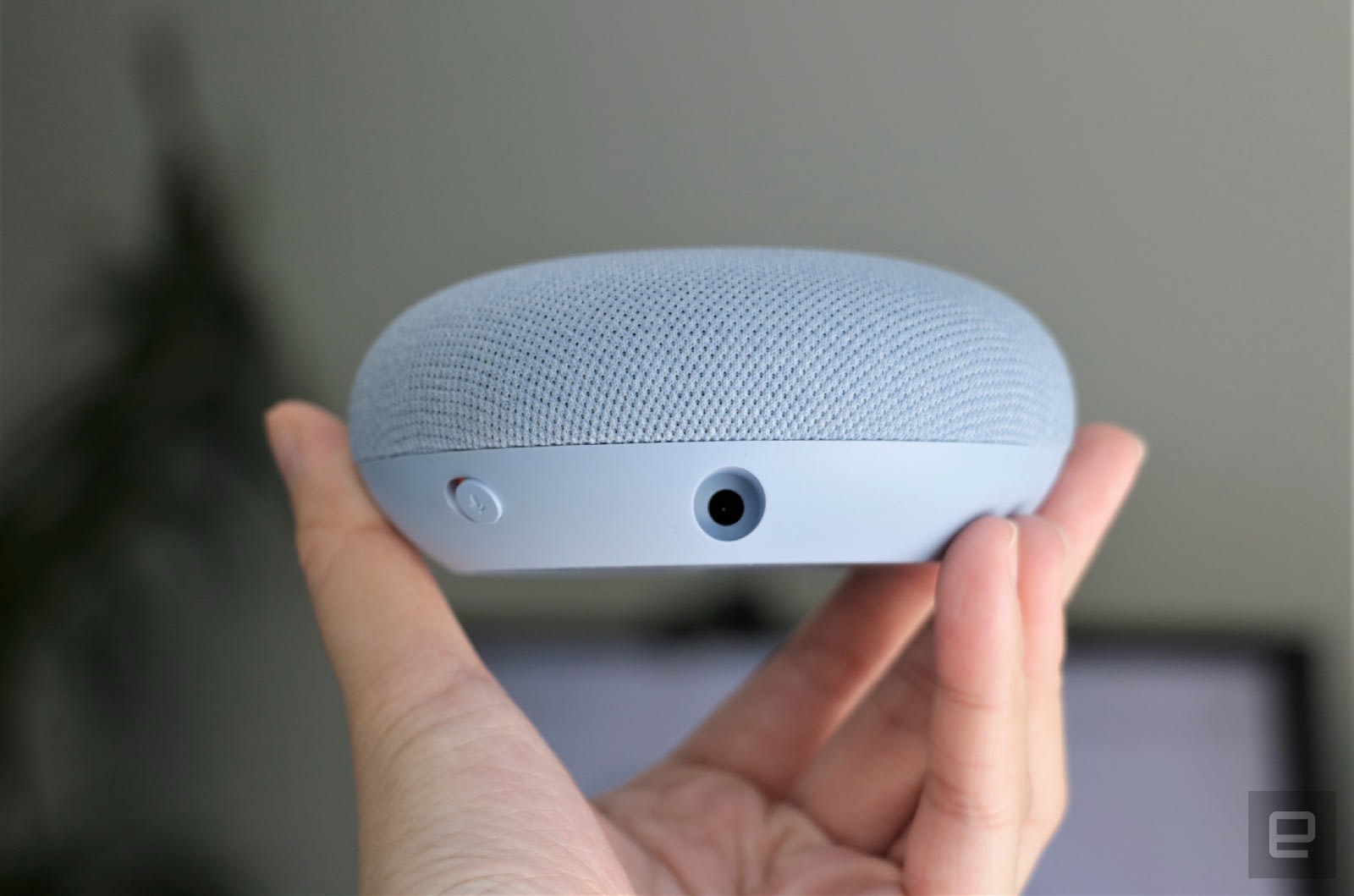 Aside from the audio upgrades, the Nest Mini also comes with a processor onboard that packs 1 teraop of power. This means your Assistant requests can be processed locally, making it faster to answer you. In fact, according to Chan, you should see a three to ten times improvement in speed over the older Mini. The Nest Mini will also support the Stream Transfer feature that Google announced last week, letting you pause your music on one speaker and picking it up on another compatible device. Chan showed me how this worked by playing a song on the Nest Mini and then asking Assistant to continue the track on a nearby Nest Hub Max, and the system did so seamlessly.

Another feature that pleasantly surprised me was something Google is calling ultrasound sensing. On newer Nest devices, the system can send out chirps via its speakers and use its microphones to pick them up. This lets them detect if something is close by, which can then enable different functions. For example, on the Nest Mini, ultrasound can tell when you're hovering your hand over it, and light up indicator symbols to show you where to tap to change the volume. Without this, it's hard to tell where the capacitive controls are.

Ultrasound sensing can also tell when there is noise nearby in specific frequencies and tune its output to make it possible for you to hear Assistant or your podcasts over the din. We checked this feature out on a Nest Hub Max, so I can't vouch for how well it works on the Nest Mini yet. If it performs the same way as it did on the smart display though, it's an impressive feature. 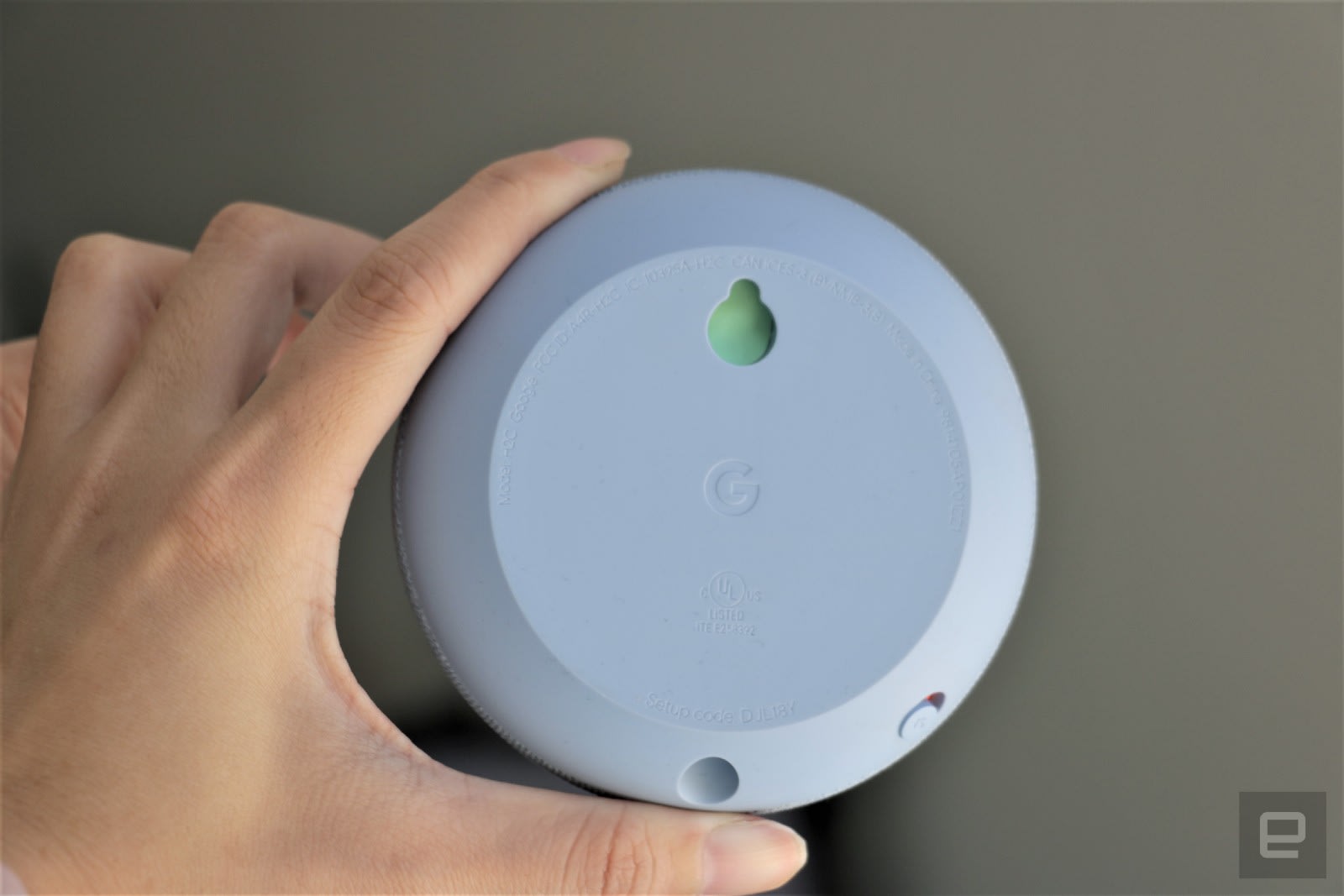 On the outside, the Nest Mini doesn't seem like a major upgrade. But it packs significant audio improvements that make the speaker truly compelling for its size and price. It's nice to see Google developing this into something more than a "companion" device or an afterthought. This might be the perfect speaker for your bathroom, where you might care less about top-notch sound and want to hear your favorite podcast over the shower or your hairdryer. If you want better quality, consider the Nest WiFi Point, which has the same internals but in a taller body with a larger chamber to resonate sound. With its latest audio devices, Google is continuing to prove its software can make up for (at least some) hardware constraints.

All products recommended by Engadget are selected by our editorial team, independent of our parent company. Some of our stories include affiliate links. If you buy something through one of these links, we may earn an affiliate commission. All prices are correct at the time of publishing.
View All Comments
Google Nest Mini hands-on: Software tricks make up for its tiny size