Alexa still reigns as the queen of assistants, though.

Two years after its birth, the device that inspired dozens of copycat smart speakers and spawned thousands of integrations is getting a makeover. Amazon's "all-new" Echo is smaller and cheaper and promises better sound. But with a pile of new competitors and even more in the pipeline, the second-generation Echo needs to prove it's still worth your money.

Compared with the older Echo, the new one is somewhat squat. The previous version was like a tall glass of water, while this year's is more like a beer mug. It's shorter, it's wider and it has a fabric covering instead of a plastic exterior with a metallic finish. Amazon offers six interchangeable shells for the new Echo, including a lighter fabric, light and dark wood veneers and a shiny silver one. You can pick any of these as your Echo's primary cover, instead of having to buy a separate shell. I'm not a fan of my review unit's black cloth cover, but at least there are attractive alternatives.

There's not much else to say about the design -- you'll still find the same light ring near the top that indicates when it's listening and the volume level. A new auxiliary jack should please those who want to connect the Echo to other speakers with a cable. Buttons at the top let you toggle volume or the microphone by hand if you can't or don't want to speak.

"Alexa, are you smarter than the Google Assistant?" While she'll give you a politically correct answer ("I like all AIs"), the actual answer is yes. 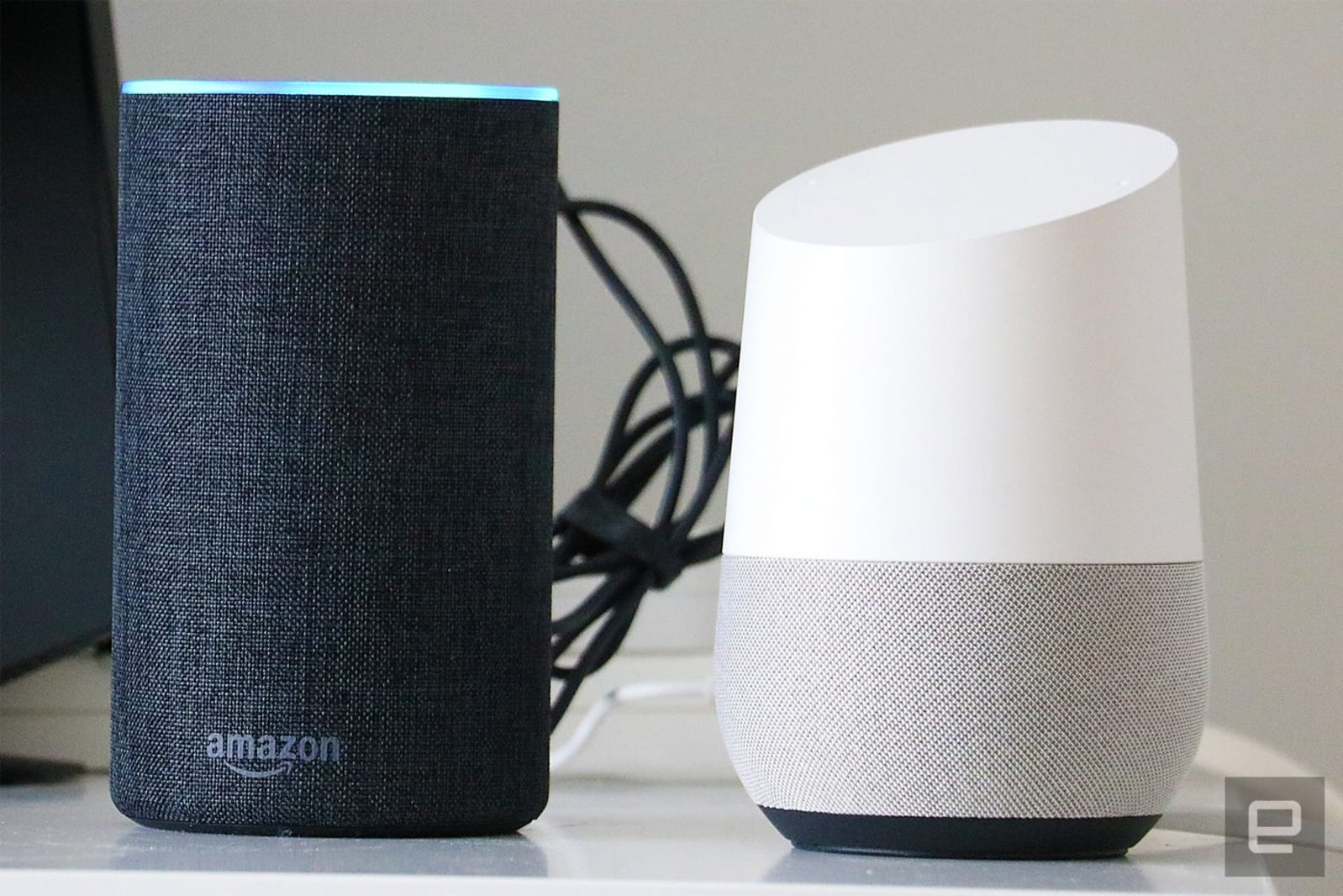 I've had both a Google Home and the new Echo side by side in my apartment for a few days, and in general Alexa is better at understanding my commands. Case in point: I like to have my "Chill at Home" playlist in the background when I'm preparing dinner or getting ready for work, but I get sick of hearing the same few songs in the same order all the time. To shuffle songs and skip to the next track after I put the playlist on, I usually have to tell Google to shuffle and skip in two separate commands. With Alexa, I just have to say "Alexa, shuffle and skip," or, "Alexa, play my Chill at Home playlist on shuffle." I can't even get Google to shuffle my playlist from the get -- it has to be a separate command.

Also, Alexa is better at dredging up songs I haven't recently heard from my 400-track playlist than the Google, which seems to just pick from the same 25 songs in the collection. Both speakers are doing so via Spotify, and it's hard to determine whether it's the music streaming service or the assistants that are causing the problem. A Spotify spokesperson told Engadget that "there are subtle differences between how Amazon Echo and Google Home work with Spotify. This may result in slightly different playback experiences in certain circumstances." 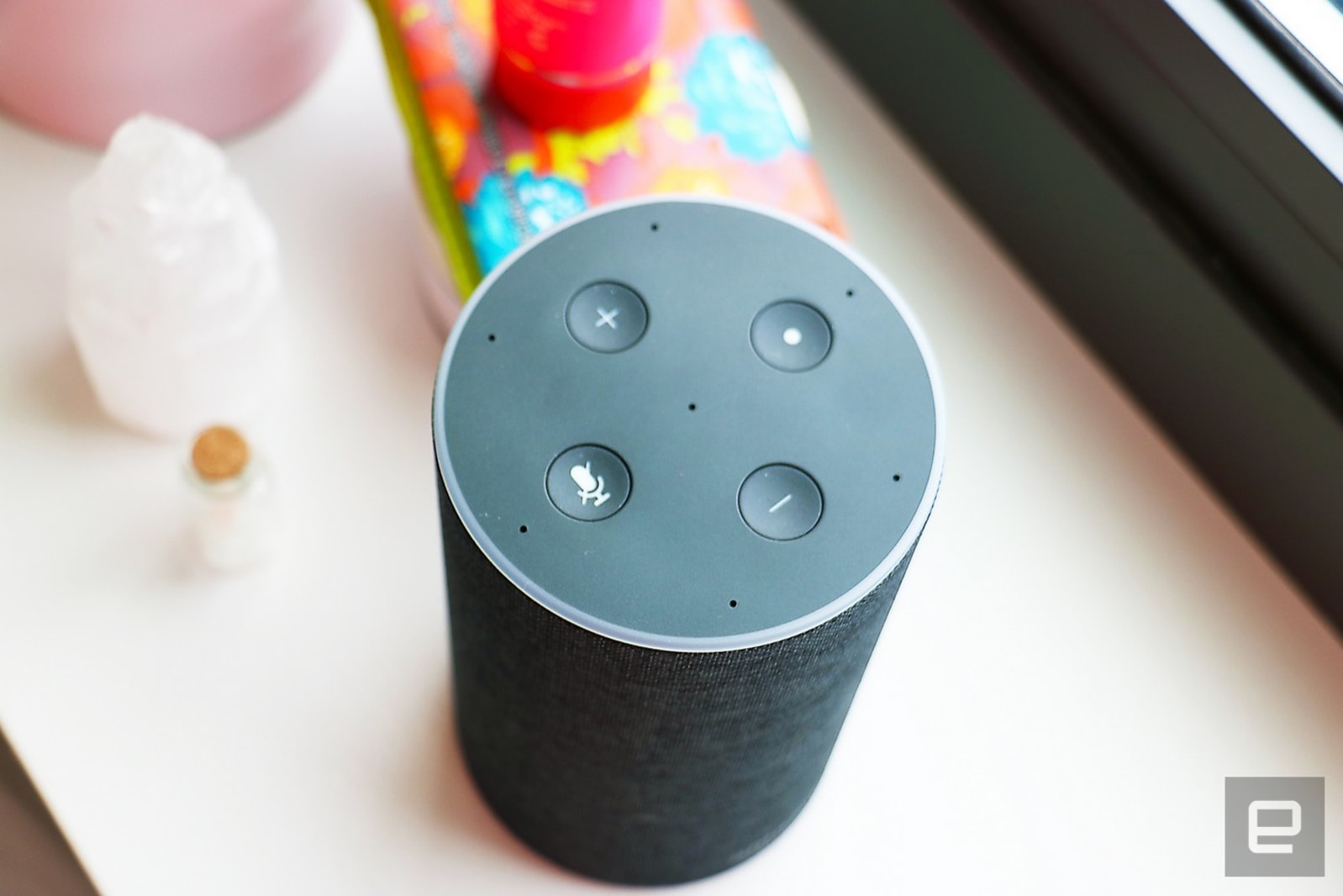 Amazon talks a big game about the Echo's audio quality, saying the speaker uses Dolby processing to pump "crisp vocals and dynamic bass" out of its 2.5-inch woofer and 0.6-inch tweeter. That sounds great on paper, but in reality it sounds limp. Vocals are indeed crisp, but music lacks bass, and instruments tend to get lost in the mix. As much as I prefer Alexa as a DJ, I find myself playing music through the Home instead -- it just sounds much richer.

The new Echo has seven microphones and noise cancellation to better hear you. I was most impressed by how the speaker can discern what I'm saying over the music it's playing -- something the Google Home struggles with. Amazon's speaker can also understand me from a distance, even when I'm in another room, facing away from it.

As an assistant, Alexa is very capable. Not only can she control smart home devices like my lamps, but she can take notes, make shopping lists, buy stuff on Amazon and more. I particularly appreciate its ability to answer follow-up questions, as if we're carrying on a real conversation. When I asked for movie suggestions in my area, she not only told me what movies were playing but also asked me what theaters and showtimes I preferred.

Alexa can now learn "Routines," which let you set a group of actions for the assistant to carry out when you say a specific phrase -- just like the Google Assistant already does. For example, tell Alexa, "Start my day," and she will rattle off the weather forecast, the traffic report and a news briefing. I tried to create a routine called "Goodbye" that would turn off my lights and stop my music. The latter isn't an option at the moment, which is too bad, but at least I could set Alexa to switch off my lights when I said "Goodbye."

I can also use the Echo to call and send messages to other Alexa-enabled devices. I had fun chatting with my colleague Chris Velazco, who received my dictated messages as both texts and audio files. The latter is necessary, since Alexa's speech recognition isn't always very accurate: She translated "Does it work?" to "Was at work?" Voice calls over the Echo are a somewhat strange experience. Carrying on a conversation with a speaker five feet away feels awkward, and your friend will really have to crank up the volume to hear you when you're so far away.

Also useful, if slightly creepy, is the Drop In feature, which lets you call your Echo via the Alexa app (or vice versa). You can hear what's going on in your home or talk to people in your apartment while you're out. If your device has a camera, like the Echo Show, you can also get a visual feed. This could be helpful, but the way these calls are connected is problematic. Instead of requiring an answer before putting the call through, your Echo simply rings once, glows green, and voilà -- you're listening to what's going on at home. Since it's your Echo and your home, and you can't violate your own privacy, I guess it makes sense? But it feels weird if you're calling in to check on unwitting friends or guests.

My favorite thing about Alexa, though? The girl has sass. I asked how she was doing one day and she said she'd been thinking about a friend lately -- a self-driving car. Her humorous, somewhat rambly response almost made it seem like I was talking to a real person. I also liked how her response to my question "What's up?" was a breakdown of my day, followed by "That's what's up." Little touches like that go a long way toward making Alexa feel conversational and real.

The new Echo faces direct competition not only from rival companies, but from within Amazon itself. If you already have a speaker that you love and only want to add Alexa's smarts, the Echo Dot makes more sense. Those who want better sound but don't want to stray from Amazon hardware should consider the Echo Plus, which is $50 more but has a slightly larger tweeter and a bigger body that should provide a more rounded audio profile and better resonance.

If you like Alexa, but Amazon's hardware leaves you feeling cold, you can always opt for the Sonos One. That speaker offers true high-quality audio and smarts, but it costs twice as much and can be difficult to set up. The Sonos is also missing a few voice command features at launch. If you want another assistant to manage your life altogether, the Google Home is a capable device that, as I've mentioned, delivers better audio for $30 more. The big difference is the software, but both Alexa and the Google Assistant work with the same major smart home brands. It all boils down to which company you've invested in. Those who own a Chromecast will prefer the Google Home, while Fire TV users should pick the Echo.

Ultimately, the new Echo's biggest drawback is subpar audio. Those who want a smart speaker with better sound have plenty of options, whether it is the more expensive Sonos One and Echo Plus or an Echo Dot that adds Alexa to an existing speaker. But for people who just want an Alexa-enabled speaker that looks good and does its job well, the second-generation Echo is a solid, affordable option.