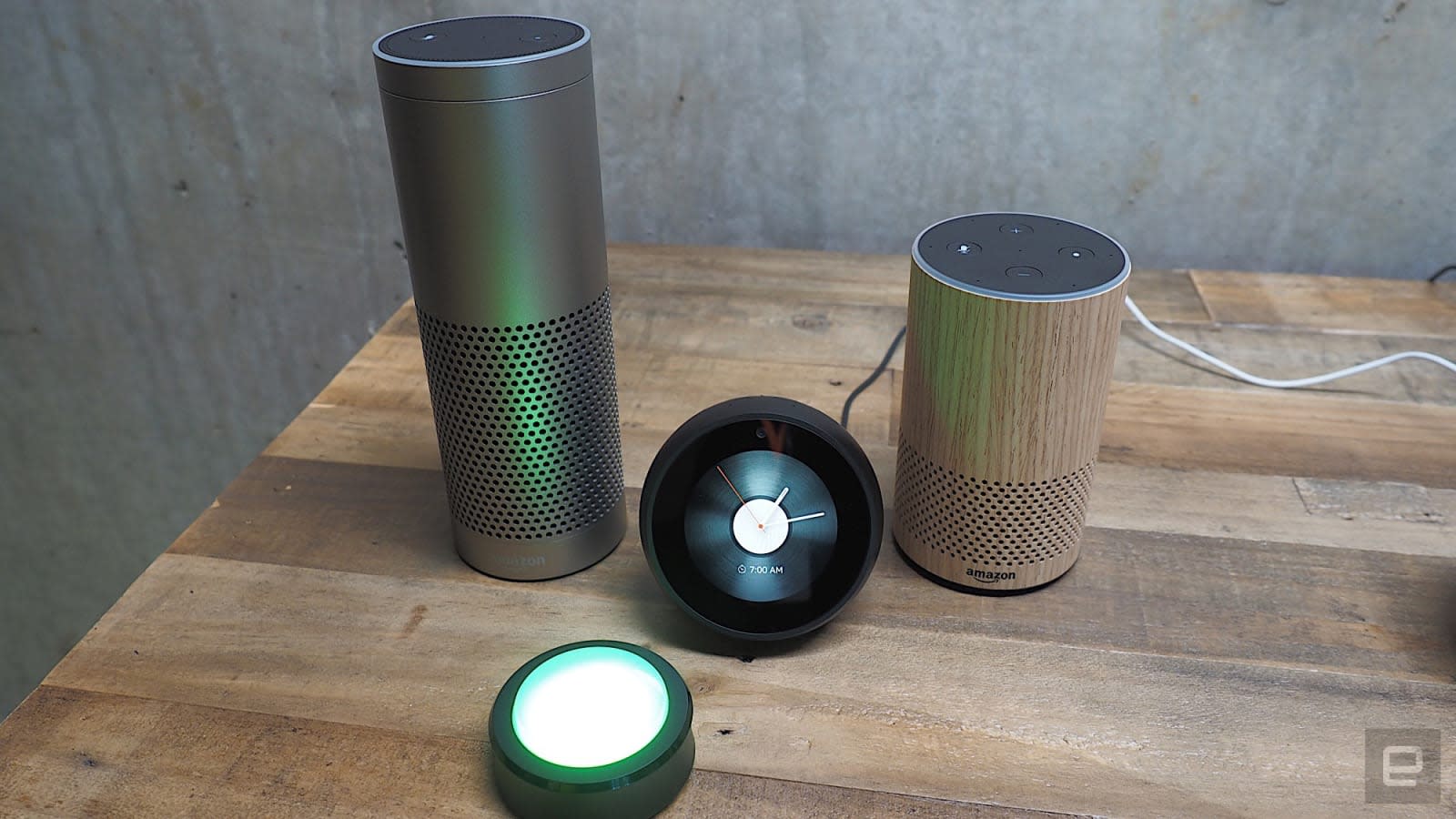 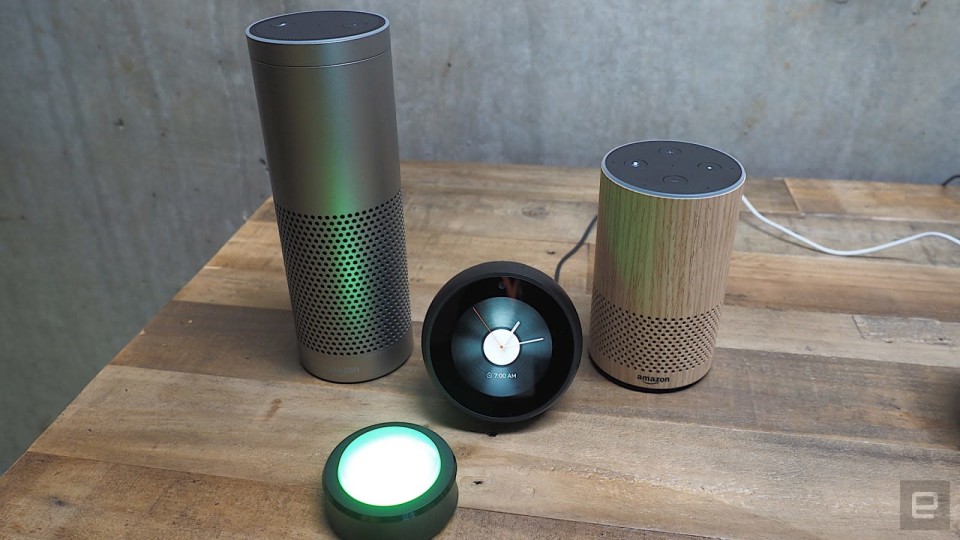 Amazon's overstuffed Echo event yesterday made one thing clear: it's not afraid of doubling down on smart speakers and its virtual assistant Alexa. The company announced a smaller $100 Echo (just as we reported in July); a $150 Echo Plus with smart hub features; and an Echo-powered alarm clock called "Spot". And that's not even including the truly strange stuff: Echo Connect, which turns your Echo devices into speakerphones for landlines; and a tiny Bluetooth button for games. Amazon's also bundling an Echo Dot with the new Alexa-powered Fire TV dongle for just $80, as well as with the Fire TV stick for $60. Whew. As impressive as this new lineup is, it's easy to see how it could also be confusing for consumers. Which Echo device do you really need? It's hard enough to decide if you're just dipping your toes into Amazon's smart speaker world. It's even tougher for the Echo faithful, who now have a bevy devices to choose from as they bring more smart speakers into their homes. Previously, you only had to choose from the "big" Echo and "small" Echo Dot (the portable Echo Tap always seemed superfluous).

Even as someone who's been living the Alexa life since the original Echo, I'm a bit confused about what to upgrade to. Maybe it's not worth upgrading at all? The new model should sound better, thanks to improved speakers. And it also has a refined microphone array, which means it'll be more effective at actually hearing your voice commands. That's something the original Echo still occasionally has trouble with. The new model is much smaller than before, and its cloth covering should make it easier to fit into your home decor.

And then there's the bigger Echo Plus, which does everything the smaller version does, but adds a smart hub. I'm the ideal customer for that model, since I already have four Phillips Hue lights in my apartment. (I also wouldn't mind the extra Hue light that comes with the Echo Plus.) Since it has its own hub built in, it also means you wouldn't need to run a separate device to hook up other connected gadgets. At the moment, you need to have a Hue Hub connected to your router to get those lights working. Amazon could encourage more people to adopt smart home devices by removing the need for additional hardware, and simplifying the overall experience.

Your Echo choices get even more confusing as you start thinking about bringing more than one speaker into your home. The adorable Echo Spot seems like it'd make a decent connected alarm clock — you can even watch a bit of video and take calls on its tiny 2.5-inch screen. But at $130, it also seems indulgent. For $30 less, you could get the new Echo with its improved speakers. The Spot is basically a cuter version of the $230 Echo Show, but that device's bigger screen makes it much more useful. You could, for example, watch Amazon Prime videos, or see responses from your Alexa queries.

Amazon's $50 Echo Dot is a far cheaper way to bring Alexa into your bedroom, or you could just buy it together with Fire TV devices for an additional $10. At this point, it's almost like the company is giving the Echo Dot away (something it actually did in August). It's understandable why. It's more important for Amazon to expand its Echo system than it is for it to make a huge profit on hardware. And the Dot is ideal for making existing Echo users even more reliant on Alexa (and consequently, all of Amazon's services).

The Echo Connect is the most curious new device from Amazon. It plugs into landline phones and instantly turns all of your Echo devices into speakerphones. Sure, it's pretty useless for people without landlines, but for users that just can't give up a physical phone line, it makes things like checking up on family much easier. It's intriguing to see Amazon innovating for users who rely on older technology — how often do we see that as tech companies chase what's new? At the same time, that's also a crowd that might be less inclined to try out new gadgets. It seems like a gamble to expect landline users to adopt something as advanced as a voice-powered speakerphone. 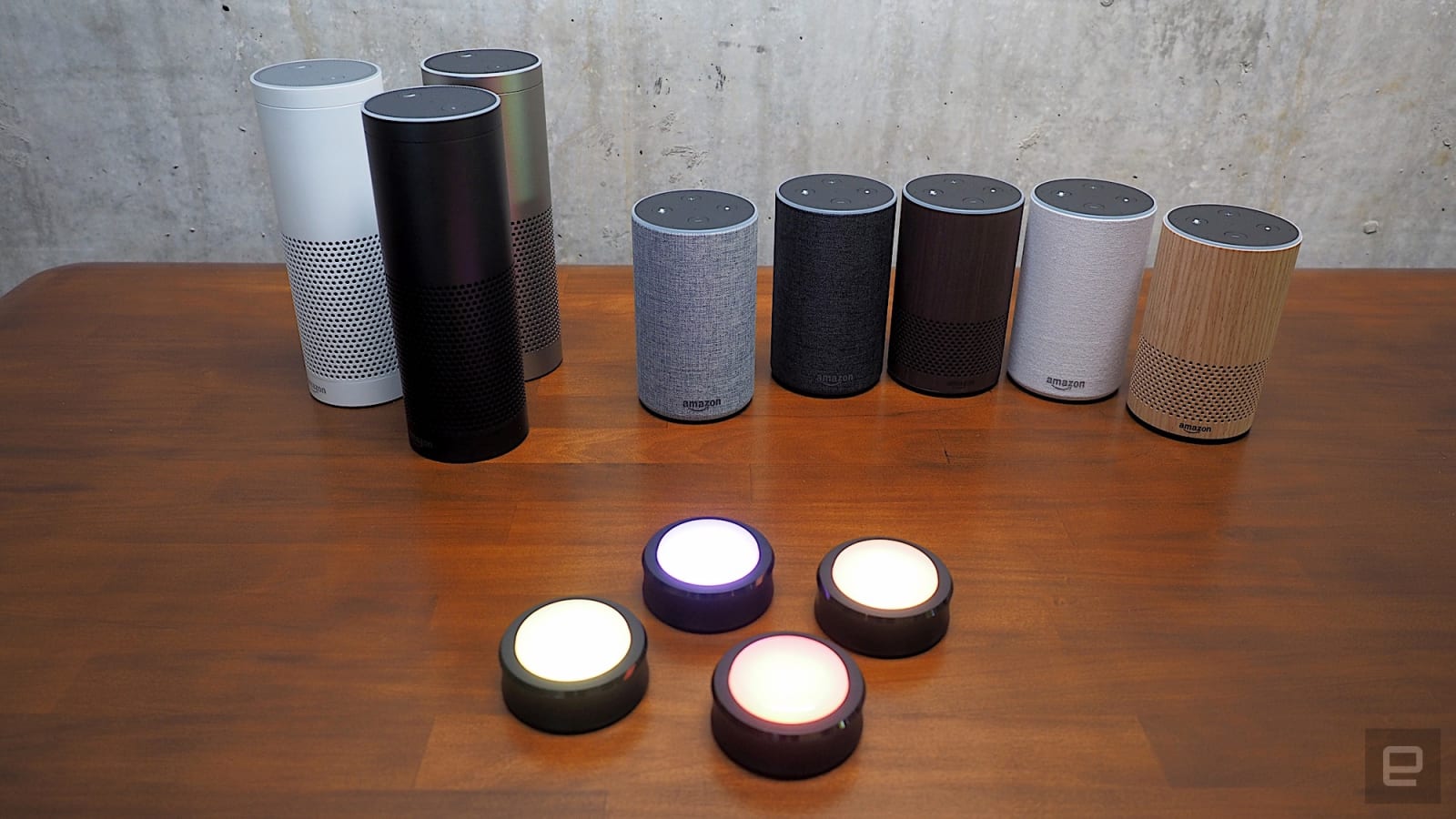 It's hard to make heads or tails of the Echo Button until we get our hands on it, but like the Echo Look camera, it seems more experimental than something Amazon truly expects to take off. It makes sense for the company to play around with what the Echo devices can do. Third-party companies are also throwing Alexa into things like portable radios, so why not try new things? Back at CES, it was clear that the Alexa ecosystem was exploding. It'll only have more room to grow if Amazon manages to bring the virtual assistant into new territory.

Ultimately, a wider variety of Echo devices is a good problem for Amazon. It may get tougher for consumers to figure out what they need, but it also gives the company more ways to fit Alexa into their lives. It's also important that Amazon doesn't lose its ability to experiment. The Echo was a risk when it debuted in 2014, like the Kindle before it. Sometimes those experiments leads to failure, like the Fire Phone. But Amazon, like most tech companies, won't truly innovate if they're playing it safe.

In this article: Alexa, amazon, AmazonEcho, Echo, EchoPlus, EchoSpot, gadgetry, gadgets, gear
All products recommended by Engadget are selected by our editorial team, independent of our parent company. Some of our stories include affiliate links. If you buy something through one of these links, we may earn an affiliate commission.