The exercises are surprisingly challenging.

I'm standing in the middle of my living room. Something resembling a garter belt is wrapped snugly around my left thigh. I'm squatting, fast. I may as well be twerking. I haven't had coffee yet. I'm supposed to be working. But this week, this is my work.

It's fair to say I'm out of my comfort zone. After eight-plus years at Engadget, I'm testing my first game: Ring Fit Adventure, a new RPG for the Nintendo Switch that's out today. The game has players completing a series of full-body exercises to make their way through a scenic world. Along the way, you run (jog in place) and fly (flap your arms) to get from point A to B, and you "fight" enemies through a series of moves, ranging from squats to core work to yoga poses.

The rest of the Engadget team encouraged me to take this assignment because I'm a marathon runner. (I mostly think they wanted to see me flailing on camera.) I also enlisted testing help from my colleague Mat Smith, an avid gamer and aspiring gymnast. Together, we'd surely be excellent judges of whether a game designed to promote fitness actually succeeds on that count. Turns out, we each emerged from an hour or so of gameplay sweatier and achier than either of us expected. 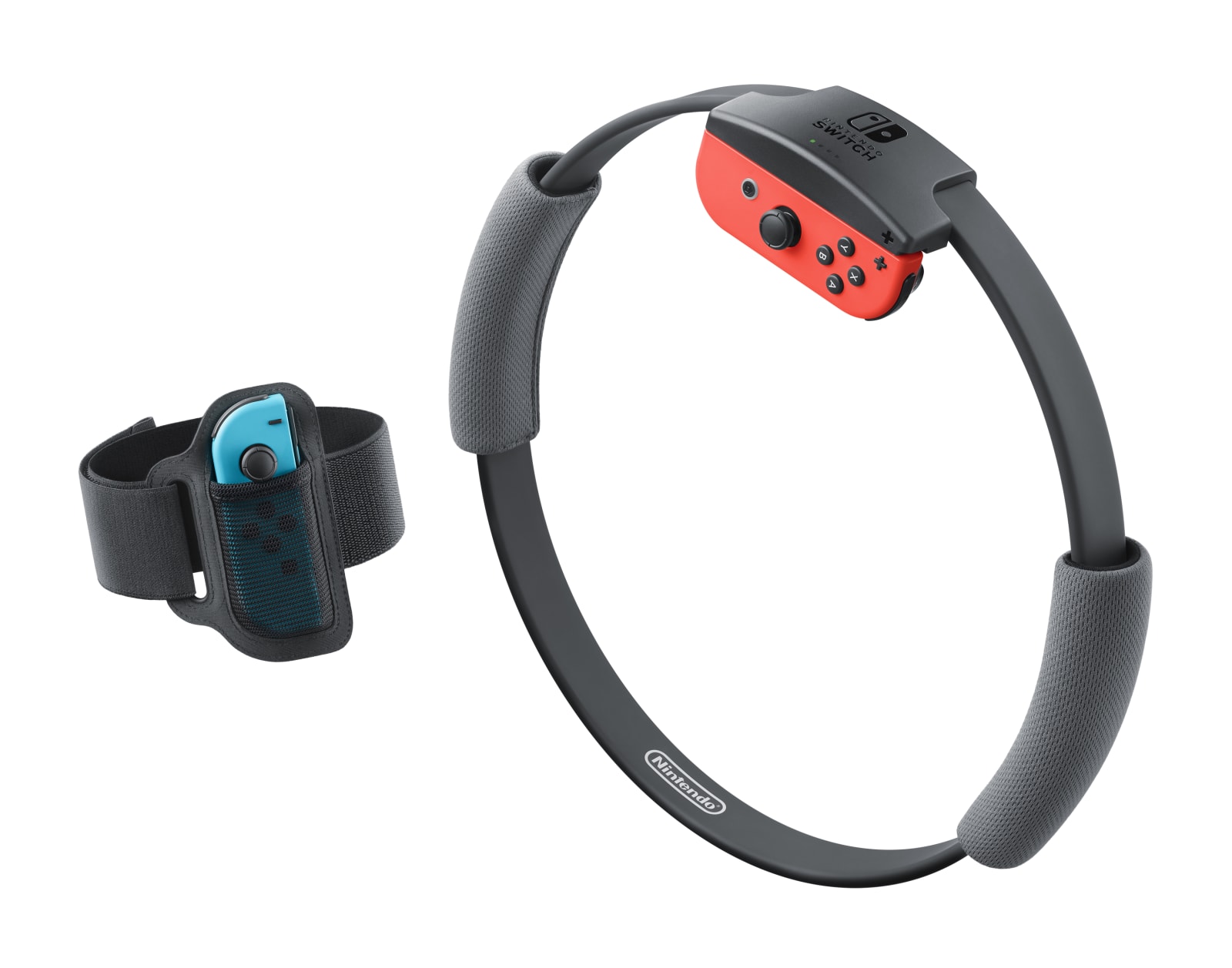 I'll get to that in a moment. But first, a word on the hardware. The game comes with two peripherals: the leg strap and a resistance wheel for arm workouts. You'll need a detachable Joy-Con for each accessory: The right controller slides into a bracket on the ring, while the left gamepad slips into a pouch on the leg strap. Once you get rolling, you'll have the option of resting your finger on the right Joy-Con's IR sensor to measure your heart rate. The garter belt, as I'm calling it, uses Velcro to fasten. I found it was comfortable and stayed put; Mat (who chose more challenging game settings) says his strap slid down his thigh.

As for the ring, it has cushy hand rests are made of the same mesh material you'd find on more serious workout gear. Mat says it reminds him of yoga wheels. At various points, you'll be either pressing in on the ring or stretching it, not unlike an archer pulling a bow. In fact, navigating even basic menus often requires you to push in, which means you're going to get a bit of an arm workout no matter which difficulty settings you choose.

Speaking of the sort, there is, as you might expect, an initial calibration process. For starters, you'll enter your age, weight and sex, and you'll be asked to move around with both the leg strap and the ring. In my case, these tests suggested what I already knew to be true: that my legs are stronger than my arms, and that my biceps are stronger than my triceps. (Stretching the wheel outward is much harder for me than crushing it like some sort of She-Hulk.) There are also tutorials to make sure you've mastered the basic movements: raising the wheel overhead, "steering" the wheel to move through on-screen menus, etcetera. 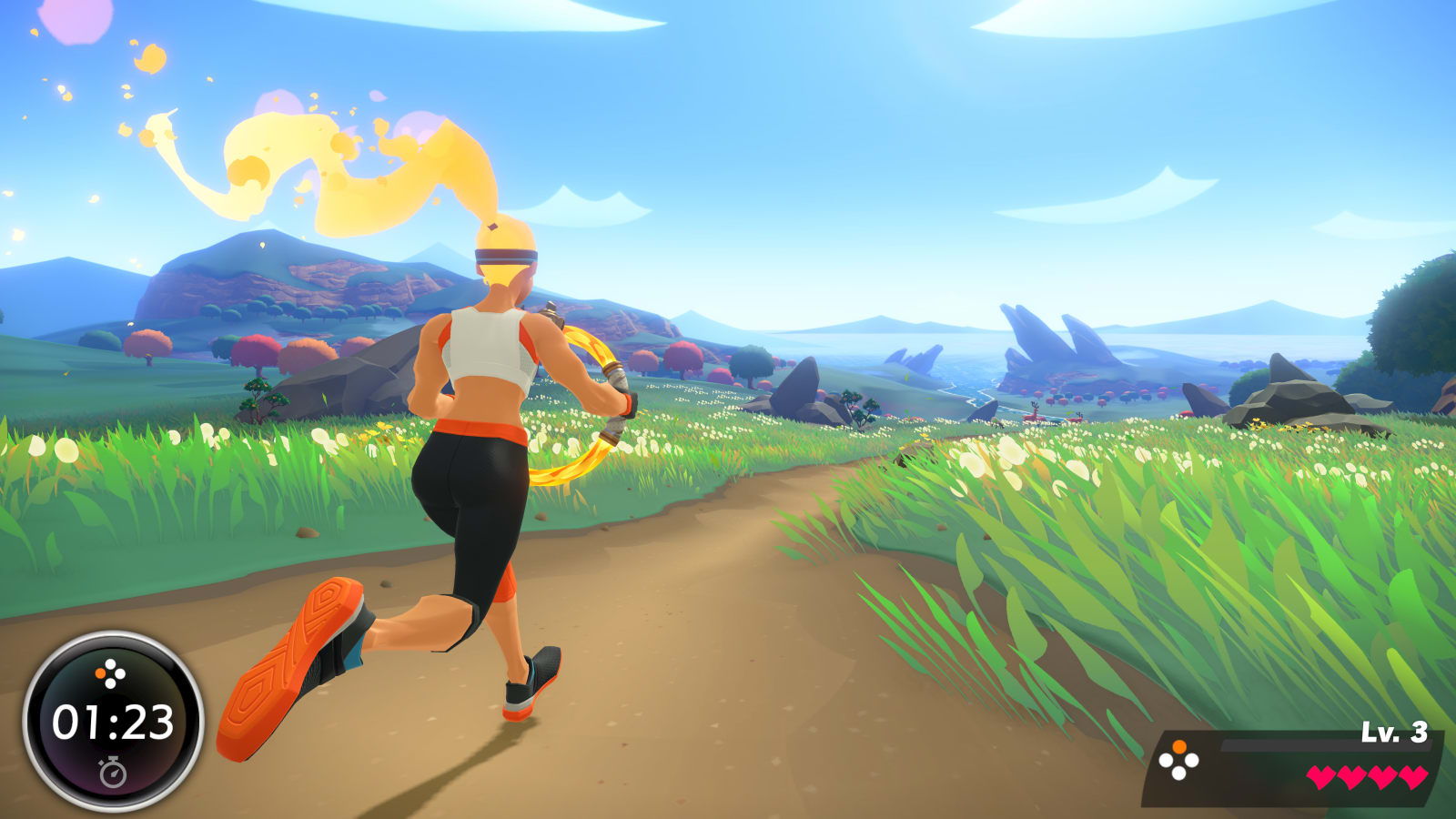 Additionally, you'll have a chance to customize your avatar, albeit in the most basic of ways. Are you male or female? What color skin would you prefer? What color eyes? You don't have a say in the outfit or hair color, and that last bit actually foreshadows a plot twist: Your hair will glow yellow throughout the game when you nail the form or are working especially hard.

Before you begin, you'll need to choose your difficulty setting. There's also Silent Mode, which is ideal for people like me who live in apartments and worry that too much jogging will piss off the neighbors. In this case, you'll squat instead of jog when it comes time to run through on-screen courses. (You'll squat fast when you need to run fast — hence the twerking.) Though this setting is called Silent Mode, as if being a considerate neighbor were the main concern, it's also a great option for people with knee issues and other injuries.

After a quick guided warmup, it's time to get fit. To the extent that the game has a plot, it feels to me (a dilettante) like a cross between Super Mario World, Mario Kart and Wii Fit. The game begins in the woods, where you find a glowing, levitating ring, with a voice from within calling to you, begging to be freed. Naively, you release the genie inside, only to find it's supervillain Dragaux, a super-buff purple gym-bro dragon, who then absconds to who knows where. You're left alone in the forest, or so you think. You notice the ring on the ground and, who could have guessed, it's aliiiiive! The ring has a name — Ring — and a personality. He (I'm going to call him he) is your wingman, your cheerleader, the Yoda to your Luke or something. He "can see potential" in you and is here to help you get fit enough to beat Dragaux. 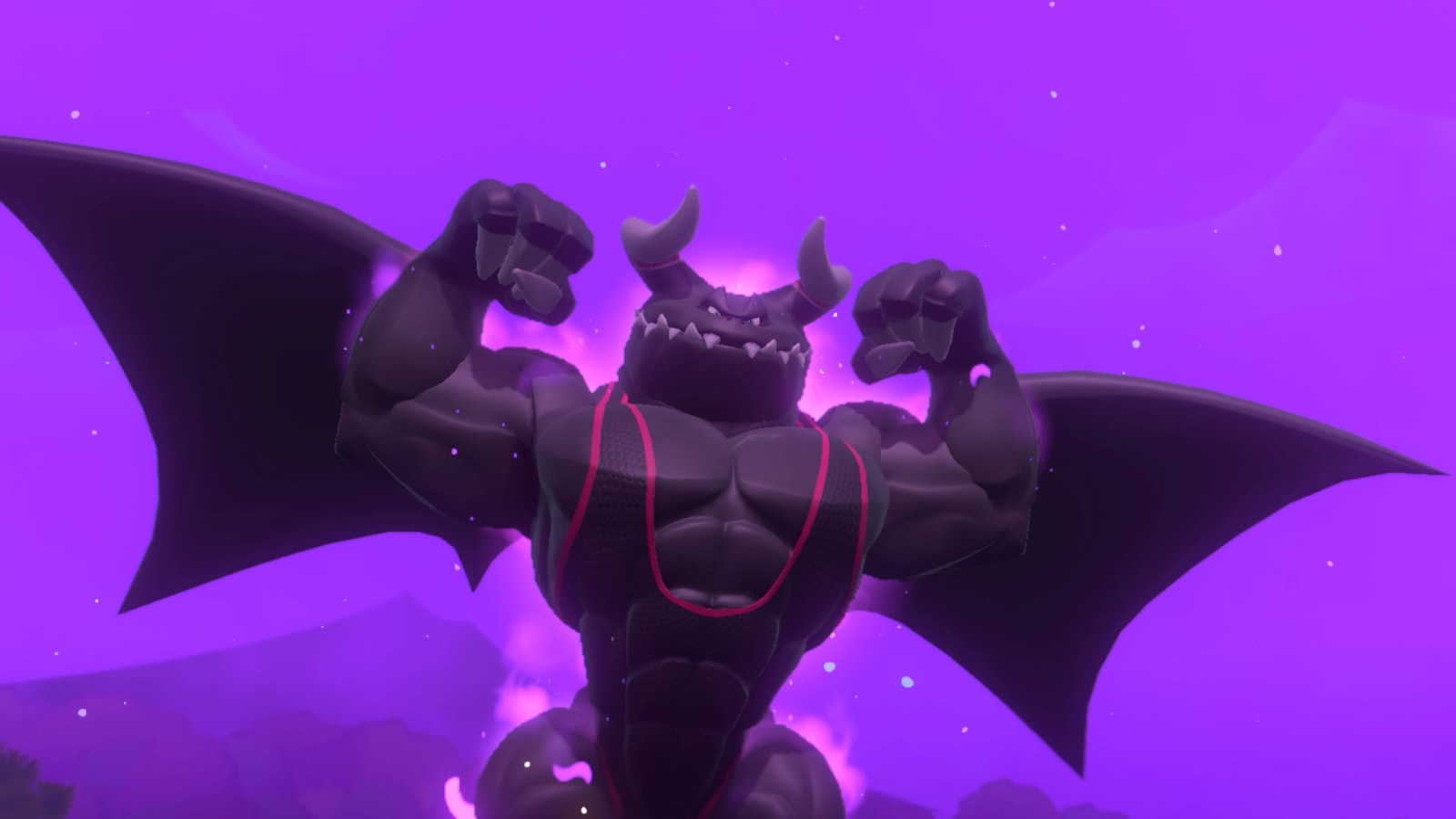 And you guys, he's kind of the worst. (Test notes from Mat: "Ring is annoying and can fuck off.") To be fair, this is a kid's game — or at least, a game sanitized enough to merit a family-friendly 'E' rating. To my ears, Ring sounds like a generic cartoon character from any show on Nickelodeon or The Cartoon Network. As an adult player, I felt slightly sheepish at times playing what appeared to be a kiddie game. I would have been just as happy to mute Ring altogether. But a child might feel right at home.

The game is divided into worlds, each marked by a handful of levels with one big, culminating battle at the end. Along the way, you engage in smaller "fit battles" with various cute little enemies. And by battles, I mean the equivalent of a dance-off, but with squats or some other exercises. All told, these different maneuvers fall into one of four color-coded categories: red (arms), yellow (core), blue (legs) and green (yoga).

Those colors matter because, as it turns out, each kind of exercise is particularly effective against similarly colored monsters. (That said, you could do as I did and favor the kinds of exercises you think you're best at — in my case, leg stuff.) As you gain experience, you level up and gradually unlock new skills. Mat adds: This should be familiar to anyone who's played a role-playing game before. It's just a very, very simple example of an RPG battle.

If not for those mini battles, Ring Fit Adventure would be a much less interesting game. Even then, I'm not sure how fun it is, per se. Running and leaping through courses reminds me of racing through the trippy worlds of Mario Kart, but without the thrill of competition. Mat and I agree that we'd like to see a multiplayer mode, with a ring accessory for each player. Barring that, one world's worth of gameplay was enough for both of us before we needed a mental break. As it happens, the game periodically nudges you into taking a breather anyway.

If you can't commit to two or three whole levels, there's always Quick Play mode, whose mini-games are the closest thing there is to multiplayer (think: doing deep squats to launch yourself into the air to collect as many coins as possible). These short games-within-the-game were some of my favorite moments of Ring Fit Adventure, and Mat's as well.

Depending on your fitness and chosen difficulty settings, one world might be enough of a physical workout, too. Though I played on easy and Mat on a harder setting, we both came away surprised and humbled by the workout Nintendo had somehow managed to slip into a kid's game. My arms burned a bit from all the ring-pressing. My heart rate had risen to somewhere in the 90s. Speaking of, these heart-rate readings aren't the most accurate I've seen, but they're close enough. After one workout, the Joy-Con put my heart rate at 88 bpm; my Apple Watch Series 5 said 95.

There are benefits to stepping up the difficulty level, though, even if easy mode is enough to get your blood pumping. Mat found that advanced settings really affect the pace, with more reps and slower progress in unlocking new exercises. In any case, don't take the initial decision too seriously — you can change it at any time and, in fact, when you resume a session, you'll be asked how you're feeling after the previous workout, if it felt too easy, and so on.

If I sound ambivalent about Ring Fit Adventure, it's because I am. I find the game charming in small doses, but too much gameplay and it starts to feel repetitive and saccharine. Even after several days of play, I'm still not totally clear on who this is for: It's a kid's game at heart, but the exercises are demanding enough even for some adults. If Nintendo were ever to add multiplayer through a software update, it would make a fun party game. For now, I'd say it's for children, tweens, families and maybe a few adults with juvenile sensibilities.

On the one hand, too, an $80 Switch game with two hardware peripherals feels like an awfully complicated way for someone to do squats and crunches in their own home. But then again, most workout tech isn't necessary, per se — mainly motivational. No one needs a $39-a-month Peloton subscription to ride a stationary bike. And your steps will always "count" even if you don't have a fitness tracker to log them. In this case, the motivator you're buying into is a video game. And I'm sure there are some children (or even adult children) who wouldn't have the motivation to exercise if not for something like this. To them I say best of luck on your fitness journey. I hope you beat Dragaux — and learn to love Ring — somewhere along the way.

All products recommended by Engadget are selected by our editorial team, independent of our parent company. Some of our stories include affiliate links. If you buy something through one of these links, we may earn an affiliate commission. All prices are correct at the time of publishing.
View All Comments
Nintendo's 'Ring Fit Adventure' hides grown-up workouts in a kids' game