Fender's take on a chord library actually plays your favorite pop songs as you strum along.

Don't believe the hype: The guitar isn't dying. But the industry that surrounds the instrument is definitely in a transitional period, to put it politely. Fender has weathered a lot of the storm by focusing one thing: getting more people to play guitar. Simply building decent affordable instruments isn't enough, though. So a couple of years ago it launched Fender Play an app and subscription service that delivers guitar, bass and ukulele lessons straight to people's computers and phones. And Fender Tune (which, frankly, is a must have for any guitarist) has an encyclopedia's worth of alternate tunings, scales and chords at players fingertips, making them less likely to abandon the instrument.

Fender Songs is the company's latest and TL;DR it teaches you how to play songs... sort of. It's a chord library, meaning that you can pull up a song that you want to learn and it'll show you the chords to play. You can see them laid over the lyrics in a pretty traditional layout, or in a scroll that displays the chords you're supposed to play as moving bars synced with the lyrics. The more traditional layout, where the chord fingerings are all shown at the top and the chord names are simply placed in the appropriate spot in a lyric sheet is great for quickly studying a song, but is a bit information dense for a phone, and not really practical for playing along with. And, at least in the preview version of the app, it was a little buggy. It would always highlight the right chord, but often in the wrong place. For example, in Rihanna's Stay there are three Am chords associated with many individual lines, and rather than highlight each Am in order it would often just highlight the first one three times.

The scroll is much better for practicing, and really that's what Songs is all about. It's not just a glorified reference book. It's actually designed to play along with. And while there are simple MIDI backing tracks (which at least in the beta version are basically unrecognizable), what sets Fender's app apart from other chord libraries is that it integrates with Apple Music. This means that you can pull up your favorite Billy Eilish track and the app will feed you the chords and display the lyrics in time with the actual song.

Now, to be clear you will need an Apple Music subscription for this to work. And, unless you're paying for a Fender Songs subscription, the library of tunes you have to pull from is pretty limited. And I want to be clear here: Songs ain't cheap. At $42 a year or $5 a month, it's a pretty hefty investment for an interactive chord book.(On the plus side, a yearly subscription also nets you 10-percent off gear from Fender.)

Part of the reason it's so expensive though, is because Fender worked with artists, labels and Apple to get everyone on board. There are definitely other chord libraries out there, but most of them aren't endorsed by the labels, the artists don't make any money off them and they don't play the actual songs (and if they do, they're probably in some sort of legal grey area). I'm not going to say that makes it worth paying for, but it at least helps explain the steep price.

In addition to showing you the chords to a song, there's also a record mode. Here the app shows the chord changes and lyrics, but doesn't play a backing track, and instead uses your phone's front facing camera to capture your performance. You can also build a set list, where you collect songs to practice or perform. 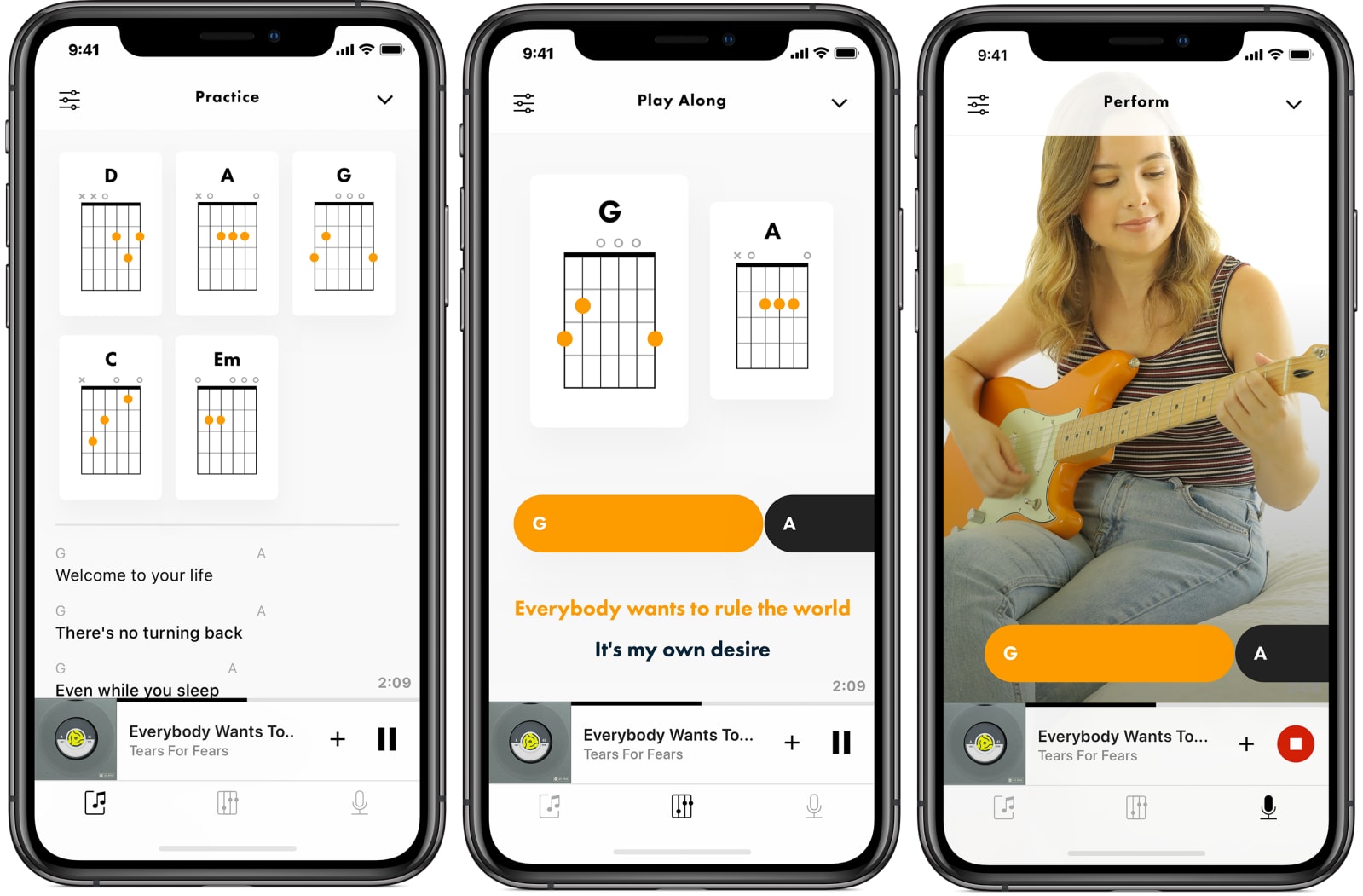 Now before you decide whether or not spring for a subscription, understand what Songs is and who it is for. It's a chord book. There is no tablature or sheet music here. It will not teach you the iconic opening riff to Sweet Home Alabama, it will only show you the chords. In many ways, Songs is continuing down the path that Play explored, shifting the focus away from "Guitarists" with a capital "G", and towards a more casual player. Songs is for the person who wants to just bang out a few chords while crooning along to The a Team.

I've had a ton of fun over the last few weeks testing the app, pulling up songs and banging out the chords to Leonard Cohen's Hallelujah and Chris Stapleton's Tennessee Whiskey. But I did find it a little unsatisfying when playing songs that have more complicated or easily identifiable guitar riffs. After strumming along to Jimmy Eat World's The Middle and Tears for Fear's Everybody Wants to Rule the World, I found myself googling tabs for them to learn them more fully. Which, I suppose in someways could be viewed as a success for Fender. Instead of putting my guitar down and giving up, I just went deeper down the rabbit hole.

For now Fender Songs is iOS only. And only supports integration with Apple Music. But an Android version is in the works and the company is working to expand to other streaming service.

All products recommended by Engadget are selected by our editorial team, independent of our parent company. Some of our stories include affiliate links. If you buy something through one of these links, we may earn an affiliate commission. All prices are correct at the time of publishing.
Fender Songs is an interactive chord book that syncs with Apple Music
apple
apple music
chord book
chord library
fender
fender songs
gadgetry
gadgets
gear
guitar
hands-on
internet
music
musical instrument
services