'Luigi's Mansion 3' is Mario's brother at his best

It's been six years since Mario's brother strapped on a modified vacuum cleaner and battled colorful ghosts in Luigi's Mansion: Dark Moon (known as just Luigi's Mansion 2 in Europe, Australia and Japan). The 3DS adventure was a brilliant but sad reminder that the game deserved another home console outing similar to the original Gamecube release. Well, it's finally happened. Luigi's Mansion 3 is a joyous and expertly-polished Switch release that further establishes the plumber as an equal to his shorter and historically more famous brother.

The biggest upgrade over Dark Moon is, unsurprisingly, the visuals. Luigi has never looked better, with a wonderfully sharp character model and expressive animations that sell his easily-frightened personality. He trots in a way that causes his knees and mustachioed face to quickly bounce up and down. I love the way he shakes and trembles, too, as you guide him through each room and slowly open wardrobes and drawers. You can't help but root for the guy as he bravely pushes forward and tries to match Mario's heroism.

The game's haunted house is delightful, too. Unlike Dark Moon -- which spanned five spooky structures -- Luigi's Mansion 3 takes place in a single hotel. The building is massive and frequently uses paranormal magic to defy physics and architectural logic. Early floors feature conventional hotel facilities such as gift shops and dining halls. The higher levels, meanwhile, include an Egyptian pyramid and ghost-riddled pirate ship. Each one is a small but fleshed out world that taps into some of the most obvious and beloved horror tropes.

Every floor is packed with tiny details. Wander the 'RIP Suites,' for instance, and you'll find hallways covered in rugs that are wrinkled and bunched up in places. Green and gold wallpaper is punctuated by oil paintings hung in thick wooden frames, 'wanted' Luigi posters (the ghosts are working together to capture him) and art deco-inspired lamps that shine some much-needed light into the gloom. Venture into a guest's room and you might find a guitar, headphones and amplifier beside their unmade bed, suitcase and room service tray.

The rooms and hallways are packed with objects you can interact with.

I was surprised by the sheer amount of stuff in each room and amazed by how much of it could be torn to shreds with the Poltergust G-00 vacuum cleaner. Curtains, bedsheets, tablecloths, pillow cases -- if it's grippable, it's probably rippable. You can suck everything up or blow it into the air, creating a maniacally messy snow globe effect. It might sound strange, but half the fun is stripping each room down to its core and then sauntering out like you've done hotel management a favor.

Tracking down collectibles will reveal rooms and secret areas that you might have otherwise overlooked.

Everything you destroy releases coins that can be traded in for helpful items. These include gold bones -- a single-use revive performed by Luigi's adorable but deceased 'Polterpup' companion. Alternatively, you can snag some special cartridges that show hard-to-find gems and Boos on the map. None of these collectibles are required to finish the game, however tracking them down will reveal rooms and secret areas that you might have otherwise overlooked.

Luigi tackles the first couple of floors with a rudimentary moveset. You suck things up with the right trigger, blow them away with the left, and launch a high-powered flash with the A button. The most basic ghosts need to be stunned with the flash and then hoovered up to deplete their HP, which is represented with a number above their heads. As you suck them up, though, they'll try to wrestle free from the Poltergust's nozzle. To keep up the attack, you have to push and pull in the opposite direction like a fisherman trying to reel in a whale. 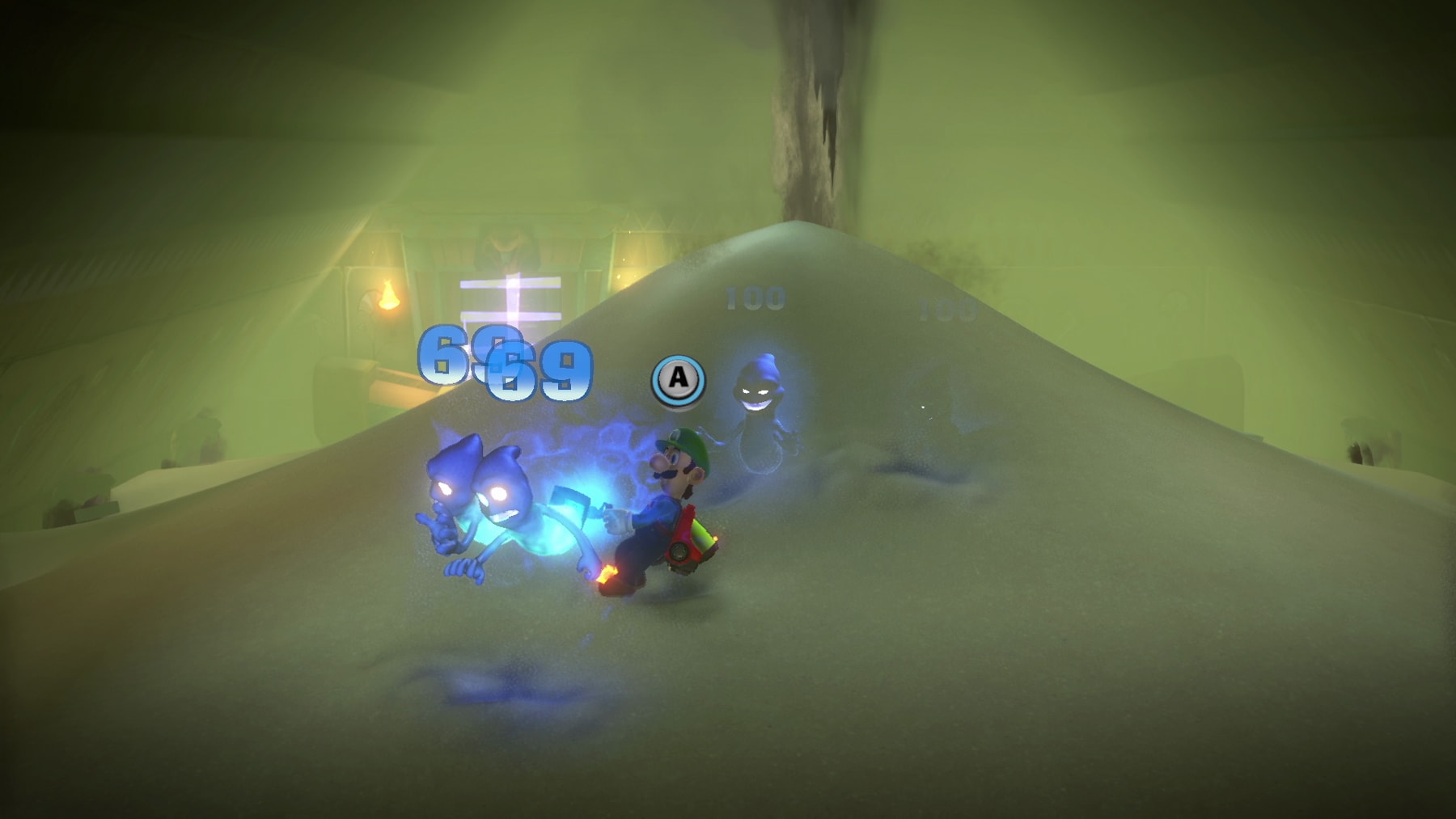 You can suck up multiple ghosts at the same time.

You're soon introduced to the Dark-Light Device, a multicolored beam that can reveal hidden objects and immobilize possessed chests, and two abilities that are brand new for Luigi's Mansion 3: Burst and Suction Shot. The former pushes Luigi off the ground and fires a quick blast of air in all directions. It's a useful ability that gives you some breathing room when too many ghosts draw near. It's also the only way to avoid surface-level attacks -- think shockwaves and long, sweeping tails -- later in the game. Suction Shot, meanwhile, is a plunger that you can then suck to remove wooden shields and environmental obstacles, such as bolted-on vents.

Luigi's combat abilities have also been upgraded with a lasso-style slam. Pull on a ghost for long enough and a circular meter will appear above the plumber's head. Once it's full, you can tap the A button to repeatedly slam the ghost against the floor and, if you're perceptive, damage other ghosts who happen to be floating by.

It's a badass move that underlines Luigi's growth as a hero. Now more than ever, he feels like a distinct character with mannerisms and abilities that are different to Mario.

And then there's Gooigi.

A second player can control Gooigi, just like Cappy in Super Mario Odyssey.

The slimy clone is a new invention by Professor Elvin Gadd, a pint-sized ghost researcher that guides Luigi throughout his adventures. Googi lives in a tank on Luigi's back and can be summoned at any time by clicking the right analog stick. You can then switch between them with a single click or recall Gooigi with a double click. (Alternatively, a second player can jump in and control Gooigi full-time.)

The light brain teasers are a welcome break from the combat.

The green companion can slip through drains and squeeze through bars that are too tight for Luigi. On the third floor, for instance, you need Gooigi to fetch keys that are trapped behind storefront security shutters. He's also required for a slew of simple environmental puzzles. These include an elevator that can only be powered by a nearby wind turbine, or a pressure pad that opens a door on the other side of the room momentarily. Gooigi has a Poltergust of his own and can, therefore, fight ghosts on Luigi's behalf. He does have some weaknesses, though. The gooey figure has 25 hit points, for example, rather than 99, and is immediately vaporized by even the smallest drop of water.

As the game wears on, you'll encounter slightly more difficult puzzles. In the basement, for instance, Gooigi slides through a grate to a passageway underneath Luigi. The tunnel is filled with exposed water pipes, though, that need to be switched off by the original plumber up above. Luigi's Mansion 3 rarely offers a true head-scratcher, though. If you're stuck in a room with no obvious way forward, you can spam Luigi's primary Poltergust abilities -- suck and blow, Suction Shot and Dark Light -- at every object and surface until something helpful reveals itself.

The pirate-themed floor has a cave heavily inspired by The Goonies.

Still, the light brain teasers are a welcome break from the combat, which can occasionally feel repetitive. Flash. Suck. Slam. Repeat. Thankfully, higher floors introduce ghost types that require a slightly different strategy. Some ghouls wear sunglasses, for instance, that need to be removed before you can stun them with the flash. My favorite was a possessed trunk that periodically opens its 'mouth' and tries to suck you in. The trick is to summon Gooigi, who can be used as a sacrificial pawn to clogs up the trunk's teeth like chewing gum. That creates a window for Luigi to dash forward and vanquish the luggage with his Dark-Light bulb.

Every floor ends with a themed boss battle, too. These include Serpci, an Egyptian royal who fights inside a sand sculpture, Johnny Deepend, a swimmer with a mean volleyball throw, and Ug, a caveman that pilots a Tyrannosaurus rex skeleton. Each boss has multiple attacks and a window of vulnerability that isn't immediately obvious. Defeat them, though, and you'll be rewarded with a glowing elevator button that lets you visit a previously inaccessible floor.

Some bosses also guard paintings that contain one of Luigi's captured friends. These tie into a story which, like most Mario-themed games, is extremely simplistic. You're trapped in a hotel. Mario, Peach and the gang need to be rescued. What more do you want or need to know, really? 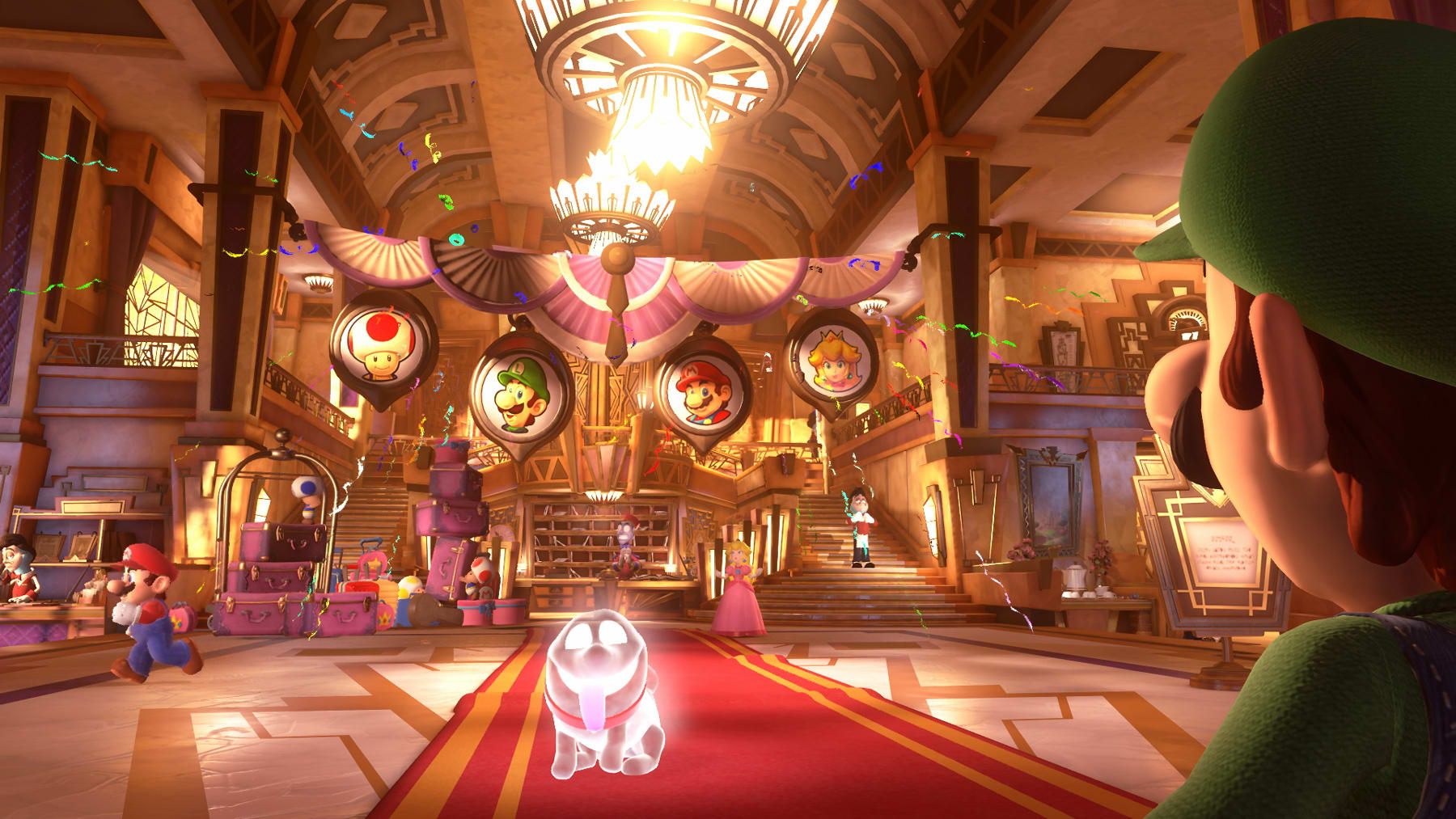 The hotel lobby, before all hell breaks loose...

Less forgivable is the occasional backtracking. On a couple of occasions, your newly acquired elevator button will be stolen by a 'Polterkitty.' You can track its pawprints with the Dark-Light Device, which usually lead to a hotel floor you've already cleared out. Find the cat and it will quickly scarper to a chandelier or ceiling fixture that is well beyond Luigi's reach. You have to coax it down, go through the usual ghost-busting rigmarole and then watch helplessly as it scampers off again. Do this another two or three times and the ghost cat will finally give back your hard-fought button.

It's simply unnecessary. I took 14 hours to beat the game (my playthrough included a bunch of gem and boo-hunting, admittedly) which is plenty long enough for a spooky Switch adventure. Luigi's Mansion 3 also has some multiplayer offerings -- three competitive ScreamPark mini-games and an updated version of Dark Moon's ScareScraper mode that lets up to four people battle through floors cooperatively. In short, the game is already good value without the campaign's dull Polterkitty sections.

Luigi isn't just 'Mario's brother' anymore. He's a character in his own right.

Tedious filler aside, Luigi's Mansion 3 is a charming and imaginative game. The type that can anyone, regardless of their age or experience with a controller, can enjoy over Halloween. I wonder, though, if the series has reached its natural conclusion. Nintendo packed every classic horror setting into this game, as well as new combat and puzzle-solving mechanics. What next? Ghost-busting on the moon (To be fair, Mario has ventured into space before...)

If anyone can dream up a worthwhile sequel, though, it's Nintendo. And I hope they do, because Luigi isn't just 'Mario's brother' anymore. He's a character in his own right that deserves just as many starring roles.

Yes, you can pet Polterpup.
One floor is entirely disco-themed.
Some mummies have ghosts lurking inside...
ScreamPark offers a few basic multiplayer modes.
All products recommended by Engadget are selected by our editorial team, independent of our parent company. Some of our stories include affiliate links. If you buy something through one of these links, we may earn an affiliate commission.