Apple AirPods Pro hands-on: I can already hear the difference

They make my commute on the subway considerably less awful.

Earlier today, I popped in a set of Apple AirPods, jumped onto an uptown 6 train, and began a short journey to our New York office. That would be a pretty apt description of any of my daily commutes to work, but today was different: Because I was using the new AirPods Pro, I didn't have to dial up the volume dangerously high to hear my music over the din.

Apple's new, $249 wireless earbuds hit stores tomorrow, and they're a big improvement over the models we've already gotten used to. As you probably guessed, we're putting together a full, comprehensive review we'll publish later on, but the AirPods Pro have made a strong enough impression that I had to share a few thoughts now.

For one, yes, they sound better than those earlier models. The familiar test tracks I've re-listened to this afternoon came through with a bit more warmth and presence than I got out of the first or second-gen AirPods, and bassy lows are better represented this time around. According to Apple, that improved sound is partially thanks to the way these AirPods use microphones and clever software to optimize the way music sounds to people's ears. The company says the AirPods Pro perform those optimizations at a rate of about 200 per second, which is fine and dandy -- to me, what really helps improve audio quality here is active noise cancellation.

This isn't a new feature for wireless earbuds, but noise cancellation is the most important change to the classic AirPods formula. I haven't spent much time with Sony's WF-1000XM3s, so I can't compare Apple's attempt to the reigning king of noise-cancelling wireless earbuds. With that said, the AirPods Pro are more than capable of quieting the noise of a raucous office, and while it won't render a packed subway car completely silent, it's enough to cut the volume of ambient sound pretty dramatically. That's not just good for your hearing health -- it's also good for your music, which shines more because it doesn't have to compete with conversations, screaming kids and everything else that makes the outside world so headache-inducing.

It doesn't hurt that the AirPods Pro come with a trio of ear tips mean to seal to your ear canals more thoroughly. If you've used those earbuds with these tips before, you might be used to feeling a little stuffy and weird after popping them in; thankfully, Apple cut a vent through the AirPods bodies so air pressure inside and outside your ears remain equal. It's a clever touch that I didn't know I needed I until today. 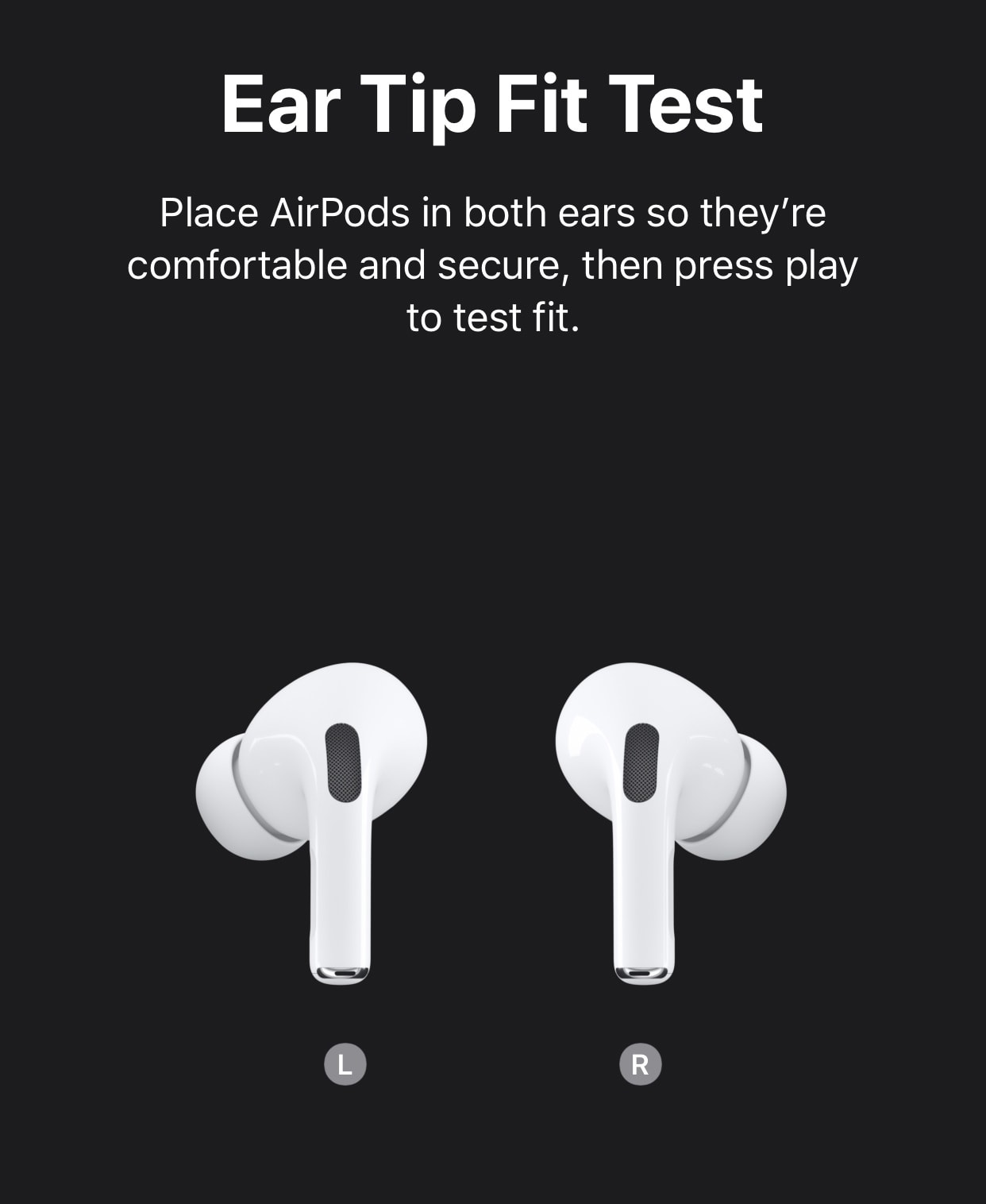 In fact, these tips are so important to the AirPods Pro experience that Apple built a test app into iOS 13.2's Bluetooth settings. Once the AirPods are connected, running the test will play a brief song snippet the earbuds analyze to see if they're being drowned out by ambient noise. There is some wiggle room here, though -- I popped a smaller tip onto an AirPod, and even though I could clearly hear people around me talking, my iPhone still cheerfully reported I had a good seal. (Apple says results like these are possible because there's a range of acceptable audio quality.) We'll see how this shakes out over time.

They haven't always been the most subtle earbuds I've ever used, but I've always appreciated that I could forget I was wearing older AirPods -- that the same is true of the AirPods Pro is a very good sign. Thankfully, Apple worked on subtlety this year; the new AirPods' stems aren't nearly as long as they used to be. That probably won't be enough to end the incessant memes on Twitter, but it's a step in the right direction at least. Still, they're at least a little silly: One of the most adorable little kids I've ever seen pointed at me when I popped the Pros in and excitedly whispered "Good & Plenty!" to her mother. She thought I just stuck some candy in my ears. 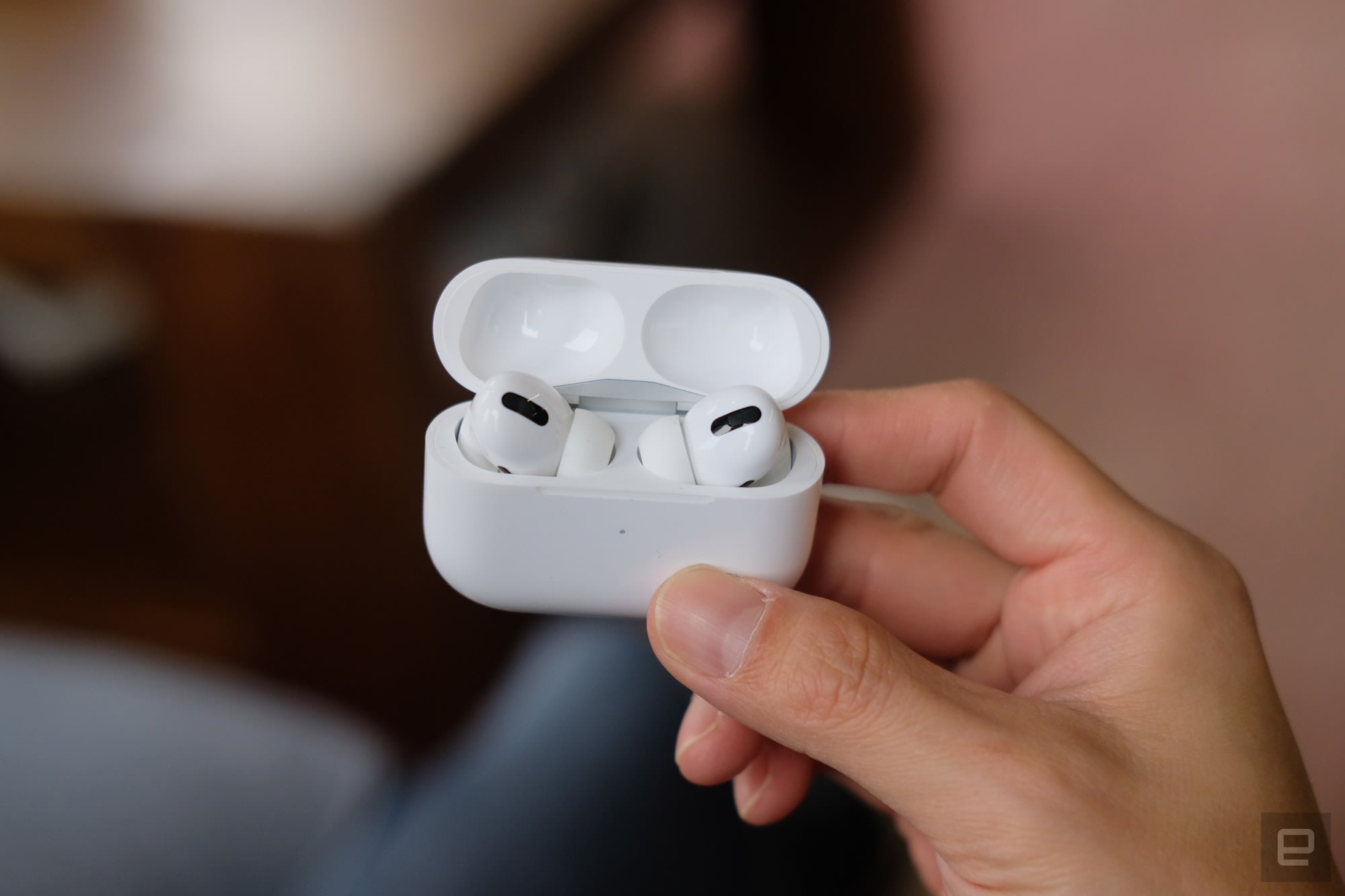 With all that said, these new AirPods are going to take a little getting used to, especially if you've grown fond of the original ones. So far, the biggest issue I've run into is that the capacitive controls baked into the AirPod Pros' stems are a bit finicky -- in theory, a quick squeeze will play or pause your current track, while longer ones will switch between noise cancellation and a Transparency mode that lets you hear ambient sounds normally. (You can't tap these AirPods to control them, which is just as well since they naturally sit deeper in your ears.)

So far, though, I've had trouble gauging exactly how much pressure the AirPods Pro need to recognize a touch. My advice at the moment is to squeeze decisively, even if it feels a little silly. My first few minutes with these things was spent wondering why they wouldn't respond to what felt like lengthy squeezes, to the point where I thought my pair might be defective. Nope. Just took me a while to really figure it out.

I also have my concerns about battery life. Apple says that, with Active Noise Cancelling enabled, the AirPods Pro are rated for 4.5 hours of use on a single charge. That's pretty impressive when you consider the original AirPods got about 5 hours from one change, and that ANC typically blows through batteries like crazy. (You can turn off some of the AirPods's microphones entirely to get an extra 30-ish minutes of use, but you lose ANC and the Transparency mode in the process.) We haven't had these things long enough to tell if they live up to Apple's promises, but stay tuned -- we'll soon have answers to this question, plus many others.