It works, but is it necessary?

Facebook's Portal video chat displays have faced quite a bit of scrutiny over the past year due to the company's terrible record when it comes to privacy, security and lack of transparency. Perhaps as a result, reports have surfaced that Portal products are not selling very well. But that hasn't stopped Facebook from moving forward with the idea. 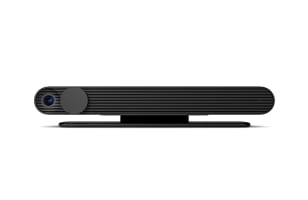 Not only has it recently released new versions of its Portal devices, it also revealed an entirely new product: the $149 Portal TV. This time, it's a camera that turns your television into a giant video chat display. (Maybe you've seen its ads featuring the Muppets.) Portal TV offers many of the same features as the standalone Portal devices, but with the added benefit of being able to watch shows together at the same time. It's not a terrible idea, and the video chat experience is actually a little better than on the smaller Portals. But it's not perfect by any measure, and Facebook's poor reputation does it no favors.

The Portal TV looks like a large, elongated webcam. The design is sleek and understated, but it's still pretty noticeable due to its size. Since it's meant to be used with your TV, you'll want to either position it underneath or on top of your set. I decided to do the latter, and thankfully, the Portal TV has foldout front and back clips to secure it. It would be quite precarious on my television otherwise.

Setting up the Portal TV is pretty straightforward. Simply attach it to both a power outlet and an HDMI port on your TV. You'll then use the accompanying remote control as your primary means of navigating the interface. You can use voice controls for certain commands as well (I'll get to those shortly), but you'll still need the remote most of the time. Thankfully, it's a joy to use; it's small, lightweight and fits comfortably in the hand due to its curved design. 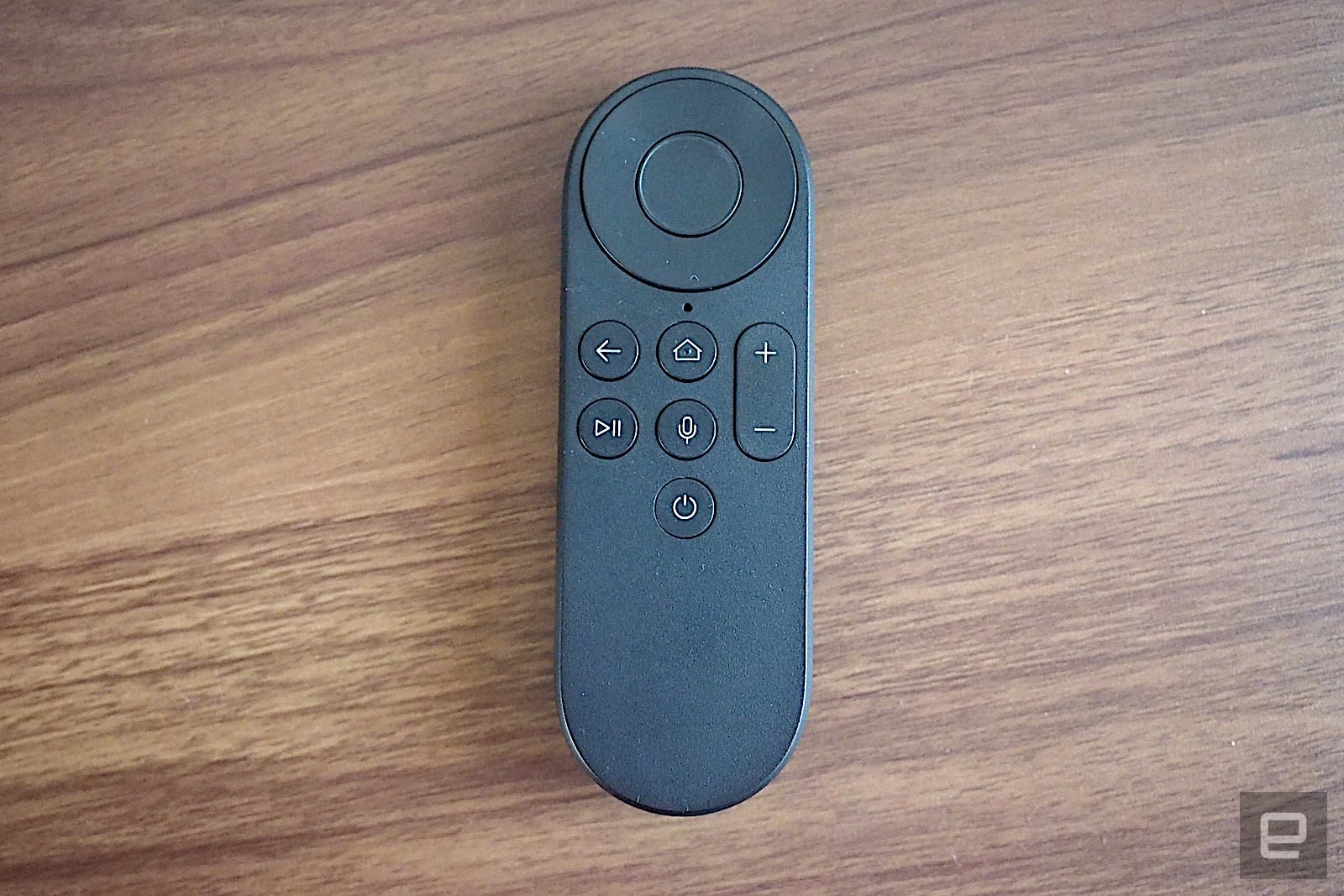 To help allay privacy fears, Portal TV has a sliding lens cover for when the camera is not in use. This doesn't turn off the microphone though, which is useful if you still want to use voice commands or have audio-only chats. To shut off both the microphone and the camera, there's a button on the right-hand side -- a red LED will appear to indicate that the microphone is inactive.

The Portal TV has two voice assistants: "Hey Portal" and Amazon's Alexa. "Hey Portal" is for device-specific controls like calling a contact or launching apps, while Alexa is for other smart assistant tasks like controlling smart lights etcetera. There is some overlap though, as both assistants can be used to check the weather and set timers and alarms. I ended up defaulting to Alexa for most non-device commands regardless to minimize the confusion.

Facebook told me that "Hey Portal" could power the TV on and off, but that didn't work on my TV because mine doesn't have an HDMI-CEC port that enables that function. Strangely, I could ask "Hey Portal" to play music on the smaller Portal displays, but it's not able to do so on the Portal TV. Asking Alexa to do so works just fine, however. 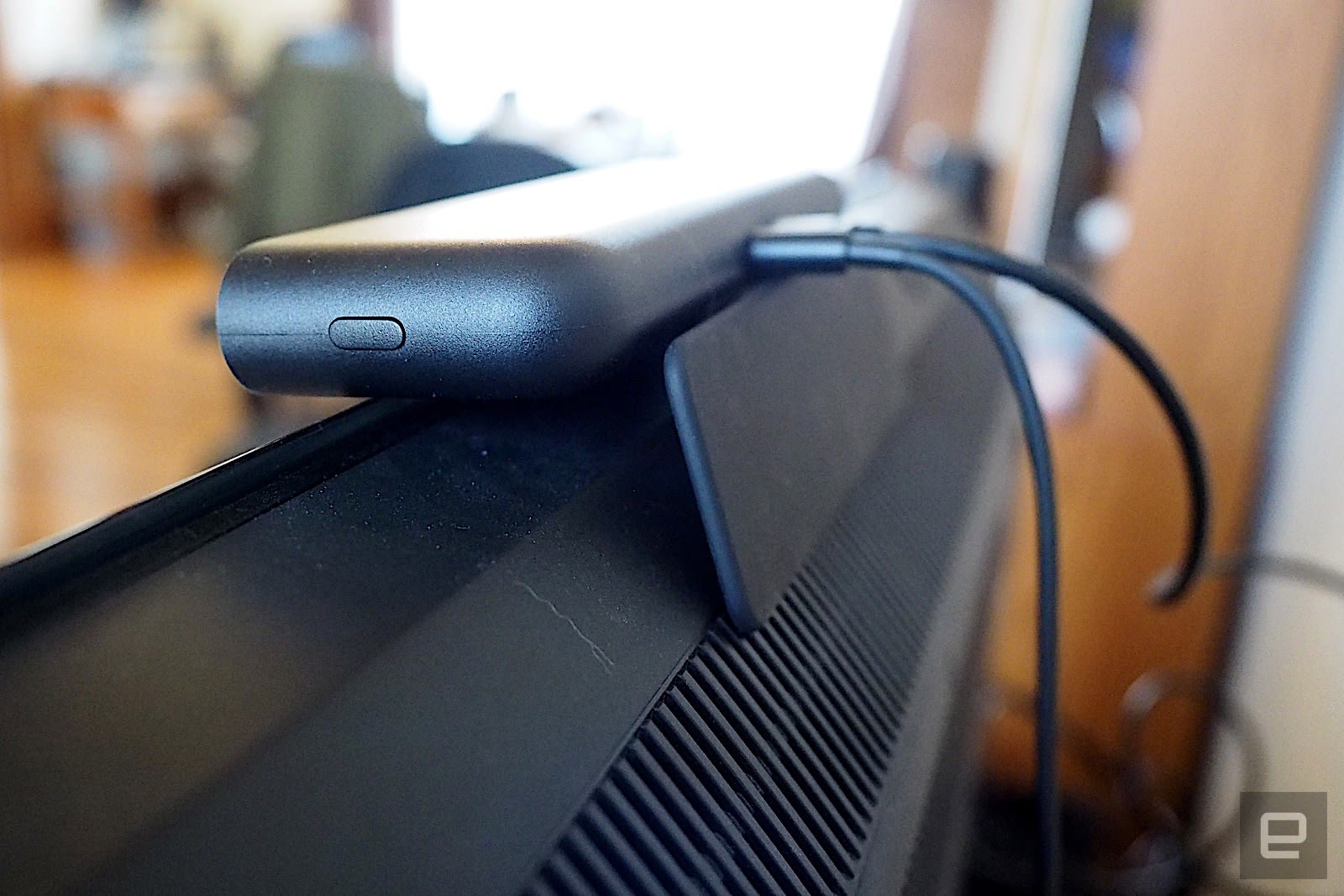 As with the previous Portals, the Portal TV displays a "Superframe" when it's in standby mode. You can set it to show your uploaded Facebook photos, and it'll also sometimes show you if it's someone's birthday or if a favorite contact is online. If you have the optional Portal app, you can also populate the screen with photos from your camera roll.

The Portal TV's interface, however, is slightly different from the others. Instead of your contacts, applications and settings laid out in separate tabs, the Portal TV shows all of these options on a single home screen. Your favorite and recent contacts are at the top, while shortcuts to various apps and the rest of your contacts list are underneath. This layout makes a lot more sense in a TV setting, as it's a lot easier to navigate with a remote control. 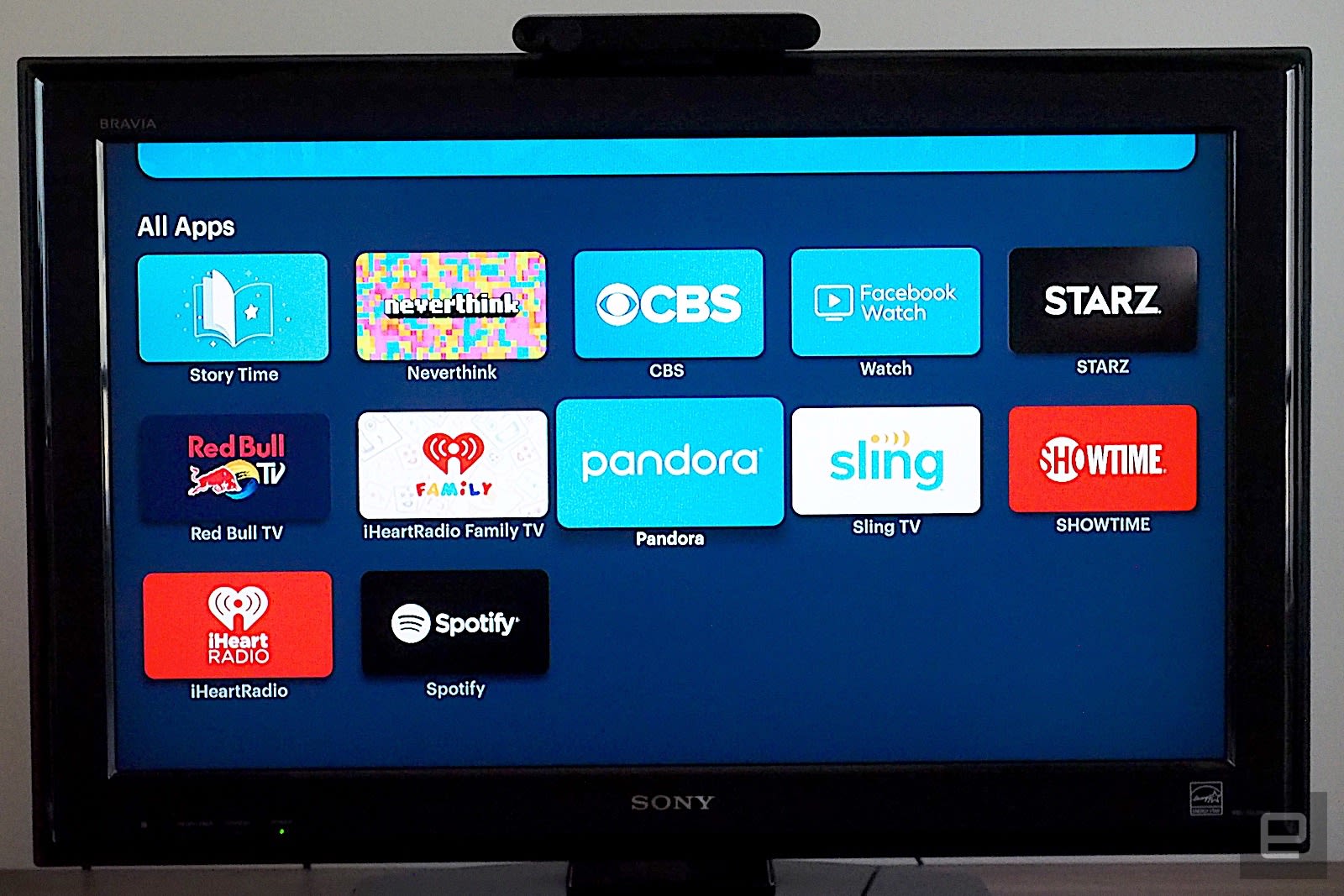 Several of these apps are unique to Portal TV -- namely the video-centric ones -- but noticeably absent are news apps from CNN and Fox plus the Food Network app, all of which are on the standalone Portal displays. Also missing is the browser, so you can't watch YouTube videos on here either. It's somewhat understandable to not include a browser in a TV device -- it's difficult to type letters without a physical keyboard -- but I would've appreciated it all the same. Facebook has also said that it would add Amazon Prime Video to the list of apps, but it's not available at this time.

The main reason you'd get the Portal TV, of course, is to make video calls. Like on all the other models, the Portal TV works with both Messenger and WhatsApp. Making calls with Messenger will work as soon as you set up the Portal TV since it shares the same Facebook login credentials, but setting up WhatsApp requires an additional step. You'll have to scan a QR code with the app on your phone -- similar to how you'd set up WhatsApp on the desktop -- and you'll be good to go.

I should mention here that while you can use the "Hey Portal" command to make calls with Messenger, you can't do so with WhatsApp, as the accounts are kept separate. Instead, you'll have to make the WhatsApp calls manually by navigating to the appropriate contact. 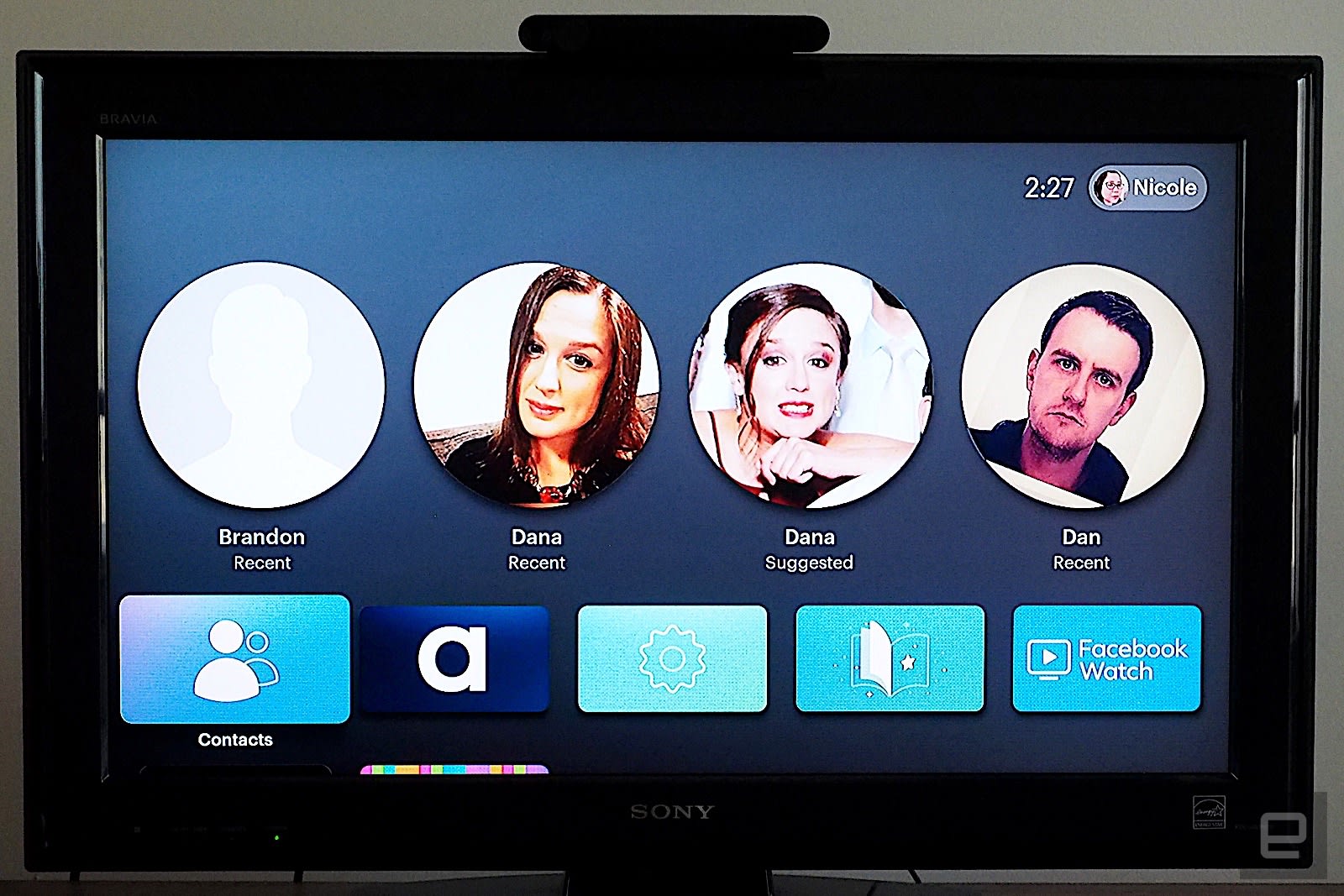 You might be wondering if you need to have the television constantly switched to the Portal TV's HDMI connection in order to get calls. Well, you don't. When there's an incoming call, the Portal TV will flash an LED light and emit a ringing sound even if the TV is turned off. If you do decide to take the call, then you can turn the TV on to the appropriate HDMI connection and answer it there.

I have to admit that I was pleasantly surprised by how much better the video chat experience was on Portal TV than on the standalone displays. The larger television screen and wider field of view (the Portal TV has a 120 degree FOV compared to the 114 degree FOV on the other devices) makes for a far more "immersive" experience -- almost as if my friends and family were in my living room with me. That wide field of view can also theoretically fit more people in the shot, which is great for those with large families.

According to Facebook, the Portal TV also has an eight-field microphone array instead of four, to accommodate larger rooms and that you're likely farther away from the device. I tried yelling at the Portal TV from an adjacent room, for example, and it was still able to pick up my voice. 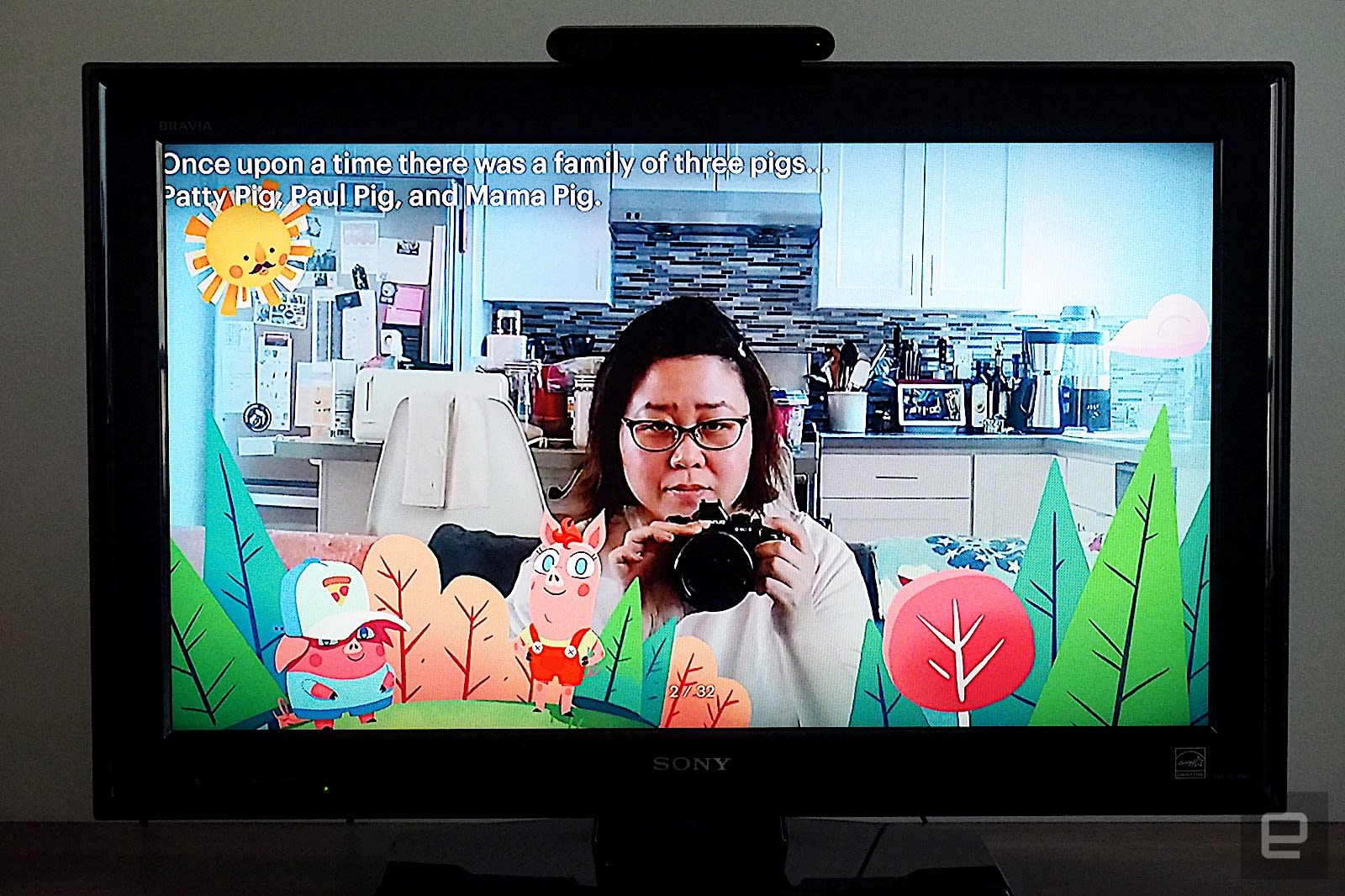 As with the other devices, the Portal TV has an AI-powered camera that "pans" and "zooms" to follow you around, keeping you in the frame. You can select a person's face via the remote to put a "Spotlight" or focus on them, which is useful if there are multiple people in the room at the same time. In my tests, it worked really well in keeping me in focus at all times, no matter where I was in the room. Even when I shifted slightly to the left or right, the camera adjusted accordingly. I think this automatic pan and zoom is pretty cool and it helps keep you in the conversation no matter where you are in the room, but it can also be a little eerie. More than one of my friends commented that it was pretty creepy.

Many of the video chat features are the same on the Portal TV too. The AR effects (like funny face filters), the aforementioned Storytime feature and games are all here. One missing feature, however, is that Portal TV doesn't have Spotify song-sharing abilities as it does on the standalone displays.

One feature that's unique to the Portal TV and not on any other Portal is called "Watch Together," which lets callers watch a show at the same time. Right now, that feature only works with Facebook Watch but the company says it hopes to add more streaming services in the future. To activate this, simply tap the "Facebook Watch" icon while you're on the call. From there, you'll be brought to the Facebook Watch page, and you can then select and view whatever video you want. 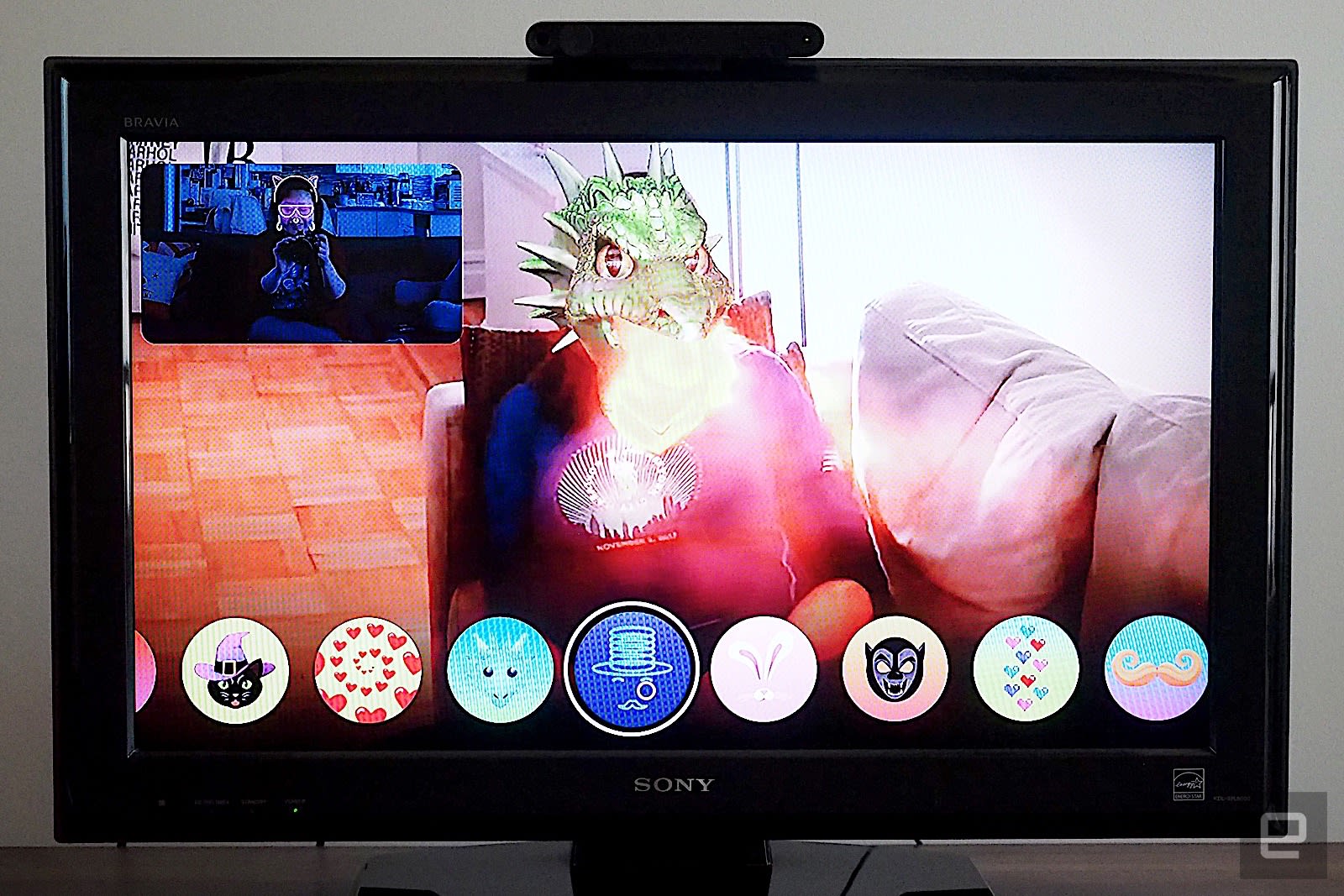 I tested this with editor-in-chief Dana Wollman, and it worked seamlessly. When the video is playing, the view of your caller is relegated to a picture-in-picture window on the upper right corner. She could view whatever video I watched, and vice versa. We were also both able to play and pause the video, no matter which one of us picked it. It was actually a pretty entertaining experience, though I would personally prefer to watch something else other than Facebook Watch. YouTube clips would be great here, for example. Additionally, I think "Watch Together" would be more fun with more people, but it only works on a one-to-one call right now. (Messenger allows up to eight people in a group call, while WhatsApp allows up to four.)

I should point out a few negatives about the Portal TV experience, however. Like on the other Portals, WhatsApp calls seem to have more latency and were a little more pixelated than Messenger calls. Also, there were several times where I ended the call by mistake by pressing the Back button on the remote -- I was usually doing so in order to end an AR effect or trying to back out of a game. I think a "Do you want to end the chat?" confirmation screen would be good here or perhaps just more intuitive controls.

Another downside is that the Portal TV will use up one of your television's HDMI ports. That's valuable real estate in my household, thanks to my various array of entertainment devices. I don't know if I value video chat enough to dedicate one HDMI port just for that. 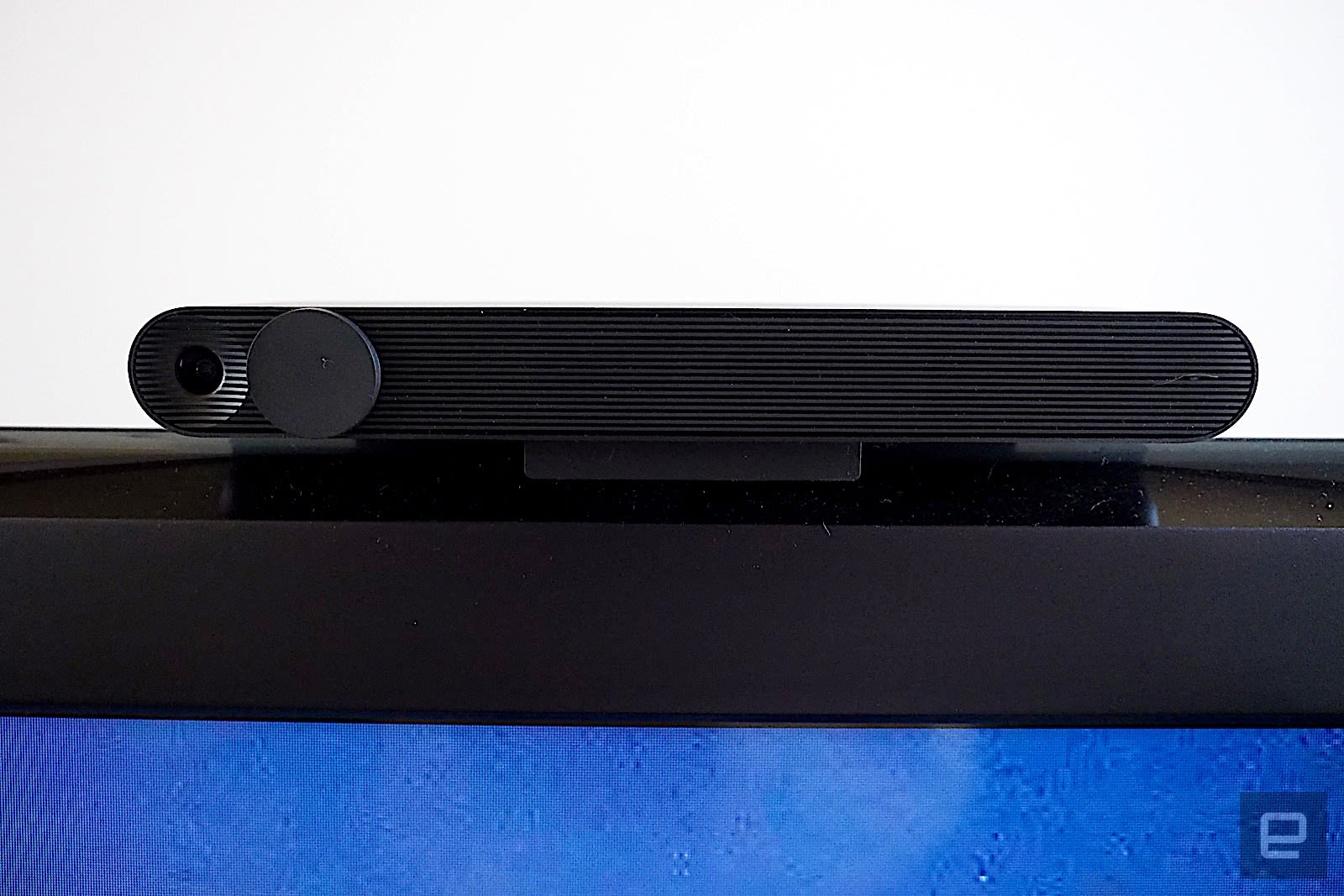 Last, but certainly not least, is the issue of privacy. Facebook attempted to soothe such fears with end-to-end encryption. Those aforementioned AI-powered features are processed locally on the device, and the company says there's no facial recognition technology at play here -- the camera recognizes that there are faces in the room, but it won't be able to assign identities to them. The Portal TV also gives warning statements that voice interactions can sometimes be recorded and transcribed, but you're allowed to delete and block recordings if you so wish.

Despite these measures, I can't help but feel put off by the device. Facebook is simply not a company that I can trust completely, due to its sketchy reputation when it comes to selling user data, security breaches and not being completely honest about what it does with your information. Combine that with problematic policies like allowing political ads to go unchecked, and I do feel wary about buying a device from such a company.

Of course, if you aren't bothered by that, then the Portal TV certainly has a few positive features. After all, Messenger and WhatsApps are two of the world's most popular chat services, and Facebook is used by over a billion people around the world. I also prefer the video call experience on the Portal TV over the standalone Portal displays. But giving up an HDMI port just for this purpose is not something I'm willing to do.