KanDao's QooCam 8K may pose a threat to Insta360 and GoPro.

When it comes to pocket 360 cameras these days, we tend to look to the likes of Insta360, GoPro and Ricoh. The adventurous folks may also tap into the lesser-known KanDao, which has today released its second pocket 360 camera, the QooCam 8K. As the name implies, this $589 device packs the highest video resolution in its class, beating the 5.7K Insta360 One X and the 5.6K GoPro Max. It even does real-time stitching, and afterwards, you can do "8K express edits" on your phone by way of smaller 4K proxy files. It's a cunning way to maximize the user's mobility without sacrificing output quality.

Due to the large 1/1.7-inch 20-megapixel sensor on both sides of the camera, the QooCam 8K is noticeably bulkier than its competitors -- so much that it's able to fit a 2.4-inch OLED touchscreen, which lets you preview footage and adjust parameters on the go. Likewise, there's a generous 3,600mAh battery with USB PD 2.0 fast charging support, though there's no word on battery life just yet. You'll also find 64GB of onboard storage plus microSD expansion here, along with WiFi and Bluetooth connectivity.

For 360 video capture, this camera can shoot 8K at 30 fps or 4K at either 60 or 30fps, and you can toggle slow motion mode which does 4K at 120 fps. All in 10-bit color as well. Live-streaming via phone, however, is limited to 4K. KanDao boasts its "SuperSteady" video capture using its six-axis gyroscope and fancy algorithm, so it'll be interesting to see how this fares against Insta360's renowned "FlowState" stabilization tech. 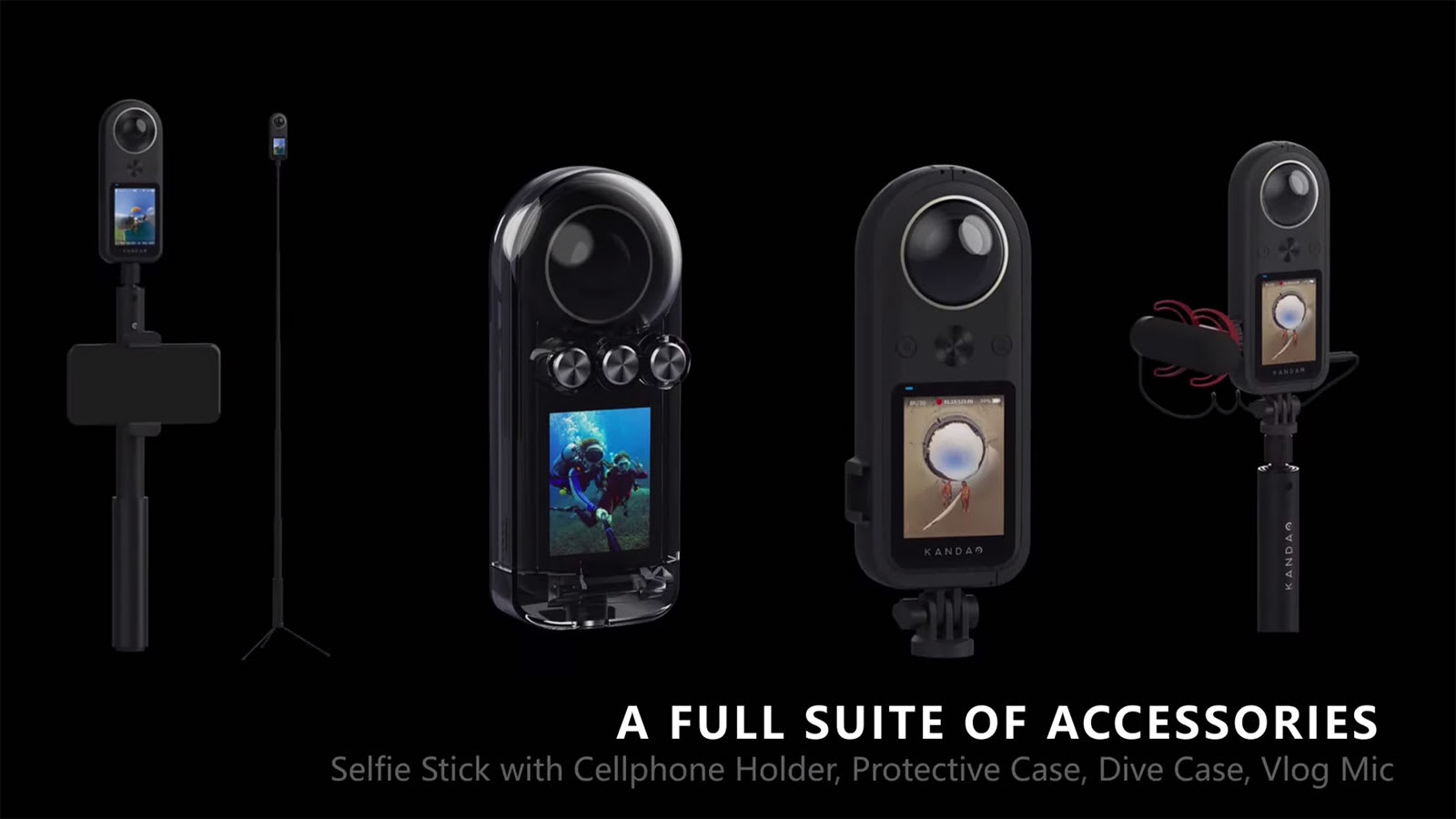 In addition to 360 video, the QooCam 8K offers a "SuperVlog" mode which outputs a flat video. So rather than reframing a 360 clip afterwards, you can set your view while filming using the touchscreen. By default, users can easily jump to this mode using the "Q" button next to the touchscreen. Vloggers will also be pleased to know that the device has a 3.5mm mic input, and KanDao will soon be selling a dedicated vlog mic kit.

KanDao is currently taking pre-orders for the $589 QooCam 8K, and it's expected to ship in December. The company added that accessories including the selfie stick (with phone mount), protective case, dive case and vlog mic will be available at a later date. Of course, this little camera isn't here to replace the professional-grade 8K 360 cameras such as the Insta360 Pro 2; between $589 and $5,000, I'm pretty sure which one most people would go for.

All products recommended by Engadget are selected by our editorial team, independent of our parent company. Some of our stories include affiliate links. If you buy something through one of these links, we may earn an affiliate commission. All prices are correct at the time of publishing.
The world's smallest 8K 360 camera can fit in your pocket
360
360 camera
360camera
8k
camera
cameras
gear
kandao
qoocam
qoocam 8k
qoocam8k
vr
vr camera
vrcamera