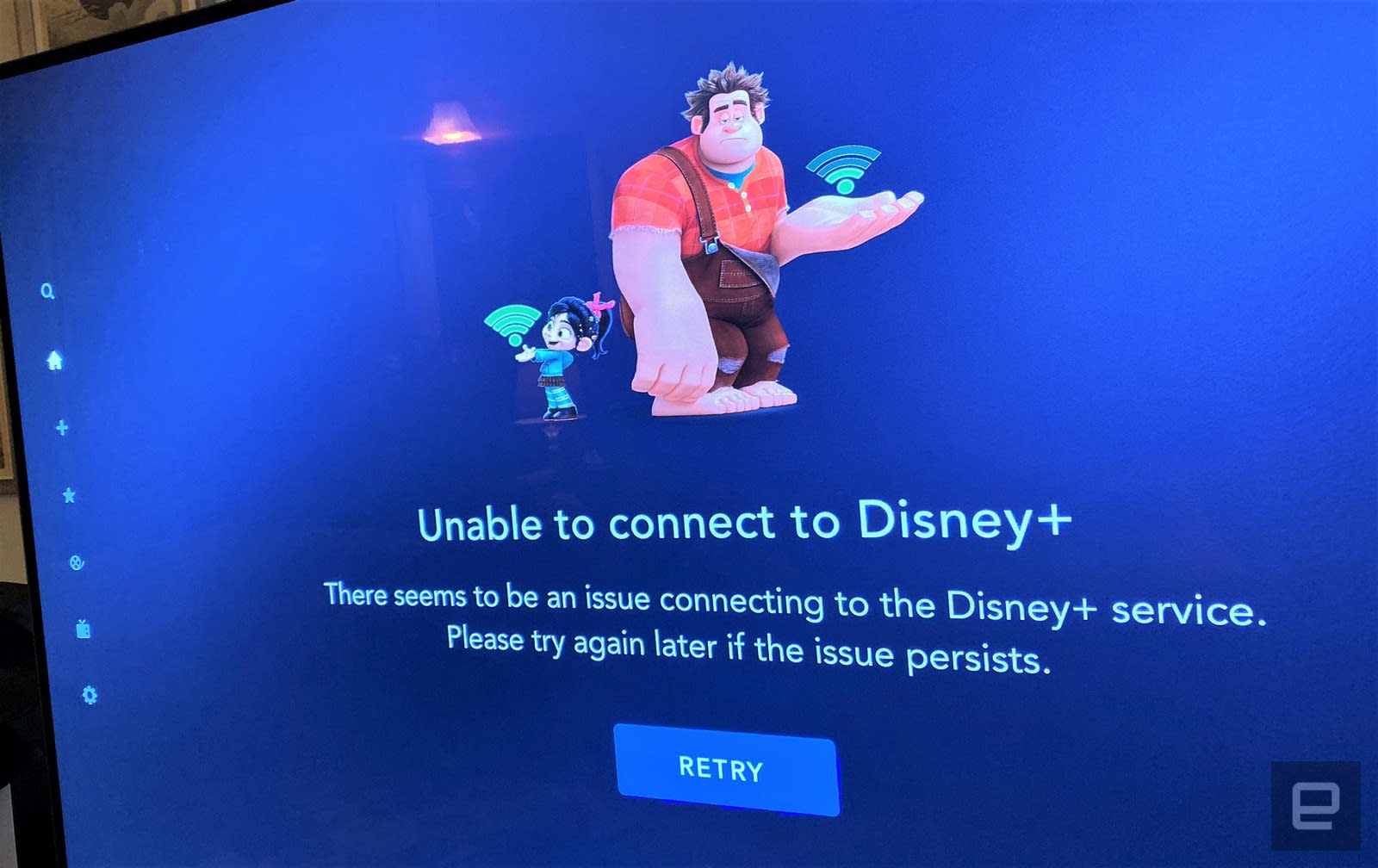 Like most new online services, it looks like Disney+'s launch isn't going to be hiccup-free. After the streaming service went live early this morning, some fans on the east coast are waking up to find that they can't connect to Disney's servers to watch any content. On Twitter, there are a growing number of reports of people running into an "unable to connect to Disney+" error message.

The issue doesn't appear to be affecting everyone, but it's widespread enough that you can refresh Twitter every minute and see new complaints crop up every couple of seconds. According to Downdector, a website that tracks these types of outages, there have been some 8,000 reports of people being unable to connect to Disney's servers. Multiple Engadget staff have run into the error message as well.

If you've tried to play an online game at launch, you'll know that these types of issues crop up all the time when everyone tries to log in all at once. More often than not, they get resolved in short order as demand settles downs and new servers are brought online.

The consumer demand for Disney+ has exceeded our high expectations. We are working to quickly resolve the current user issue. We appreciate your patience.

In fact, Disney said it expected exactly this type of issue to crop up. According to The Verge, the company's Kevin Mayer said last week, "there are always technology glitches. And you can always improve the technical performance of any service like this and we'll continue to do so. We haven't solved everything by any means." Disney attempted to anticipate some issues by conducting a soft-launch in the Netherlands, but if today proves anything, it's that a smooth launch at scale is tough.

It appears Disney has also delayed the launch of the service in Puerto Rico. The company had said it would launch there on November 12th, just like on the mainland, but it will now instead launch one week later on November 19th. It's not clear if today's issues are related to the delay.

In a statement to Engadget, a Disney spokesperson said, "The consumer demand for Disney+ has exceeded our highest expectations. While we are pleased by this incredible response, we are aware of the current user issues and are working to swiftly resolve them. We appreciate your patience."

Update 10:21AM ET: This post has been updated with a statement from Disney.

In this article: av, Disney, Disney Plus, Disney+, entertainment, error, services, streaming, streaming service, streaming video, unable to connect
All products recommended by Engadget are selected by our editorial team, independent of our parent company. Some of our stories include affiliate links. If you buy something through one of these links, we may earn an affiliate commission.