Sony's baffling wearable speaker heads to the US

Want the convenience of portable tunes but hate headphones and earbuds? Sony has a solution for you in its "Immersive Wearable Speaker" (SRS-WS1), which is perhaps the company's most aptly named piece of audio kit. You wear it around your neck, it emits sound, you get it. The speaker launched in Japan back in 2017 (we caught a glimpse of an earlier version during SXSW 2016), but now it's finally making its way to the US in December. It'll be available for an introductory price of $250 if you pre-order by December 1st, and $300 afterwards. The real question, though, is who would actually want it.

I've been testing out the Immersive Wearable Speaker for the past week, and from the get-go, it was one of the strangest products I've ever used. It looks and feels like a quality Sony device, and it even sits on my neck well with excellent weight balance. But nothing about the speaker works the way you'd expect.

For one, it's not Bluetooth compatible at all. Instead, you'll have to manually plug in 3.5mm or optical cables (ugh) into its wireless receiver. And since it's relying on physical connections, there aren't any playback controls on the speaker itself. All you've got is volume adjustment, vibration controls (which adds a bit of oomph to the low-end) and power. 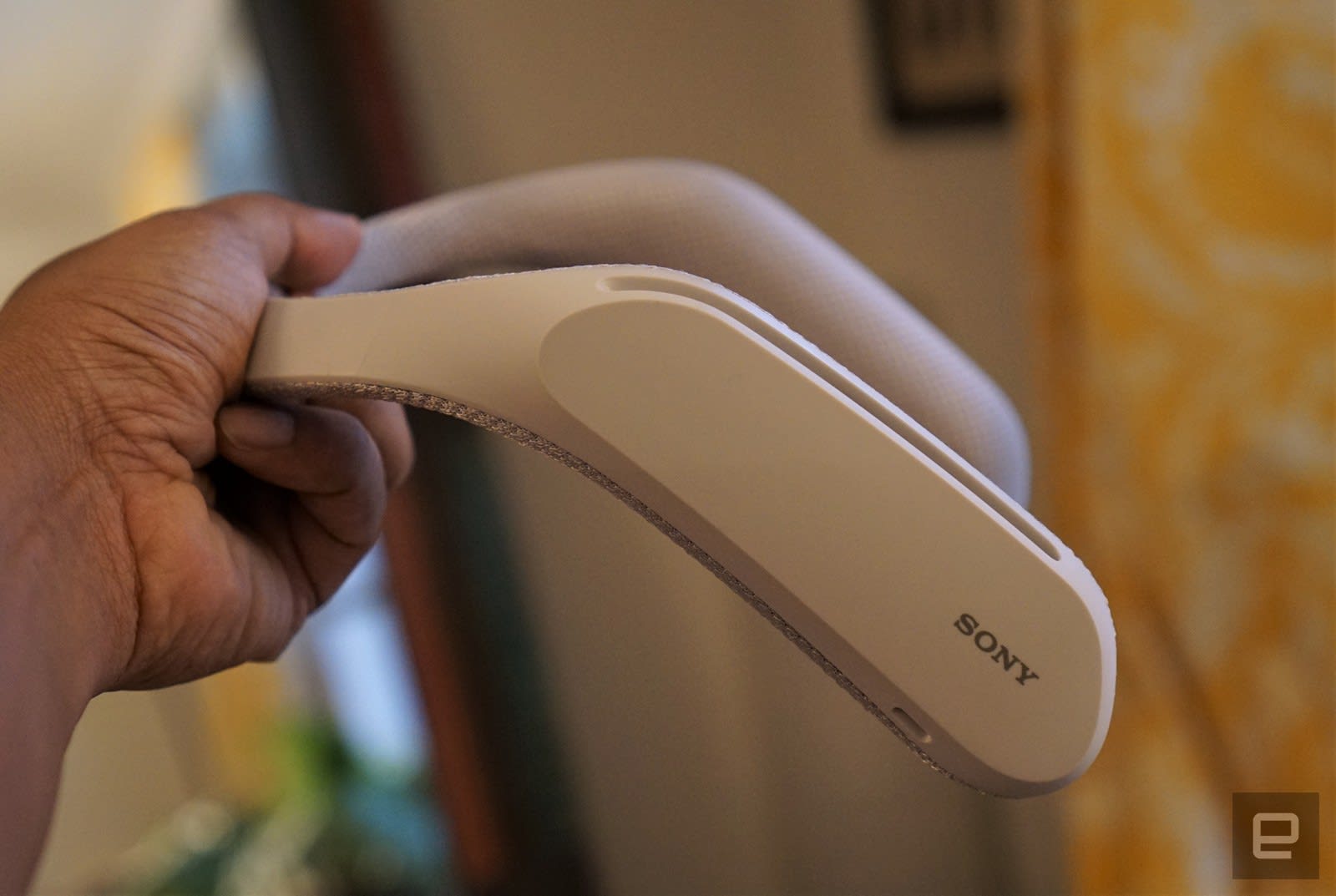 Sony is positioning the Immersive Wearable Speaker as something you'd connect to your TV for late night viewing, so you could think of it as a soundbar for your neck. But it's not actually a great TV solution at night, since it's still clearly audible to anyone else nearby. It's also astounding to me that a wireless product doesn't support Bluetooth, the most widely supported wireless standard out there. You can use a USB-C cable to quickly connect the speaker to a smartphone or tablet, but you'll still have to deal with the battery draining eventually. (Sony says it should last around 3 hours per charge.) 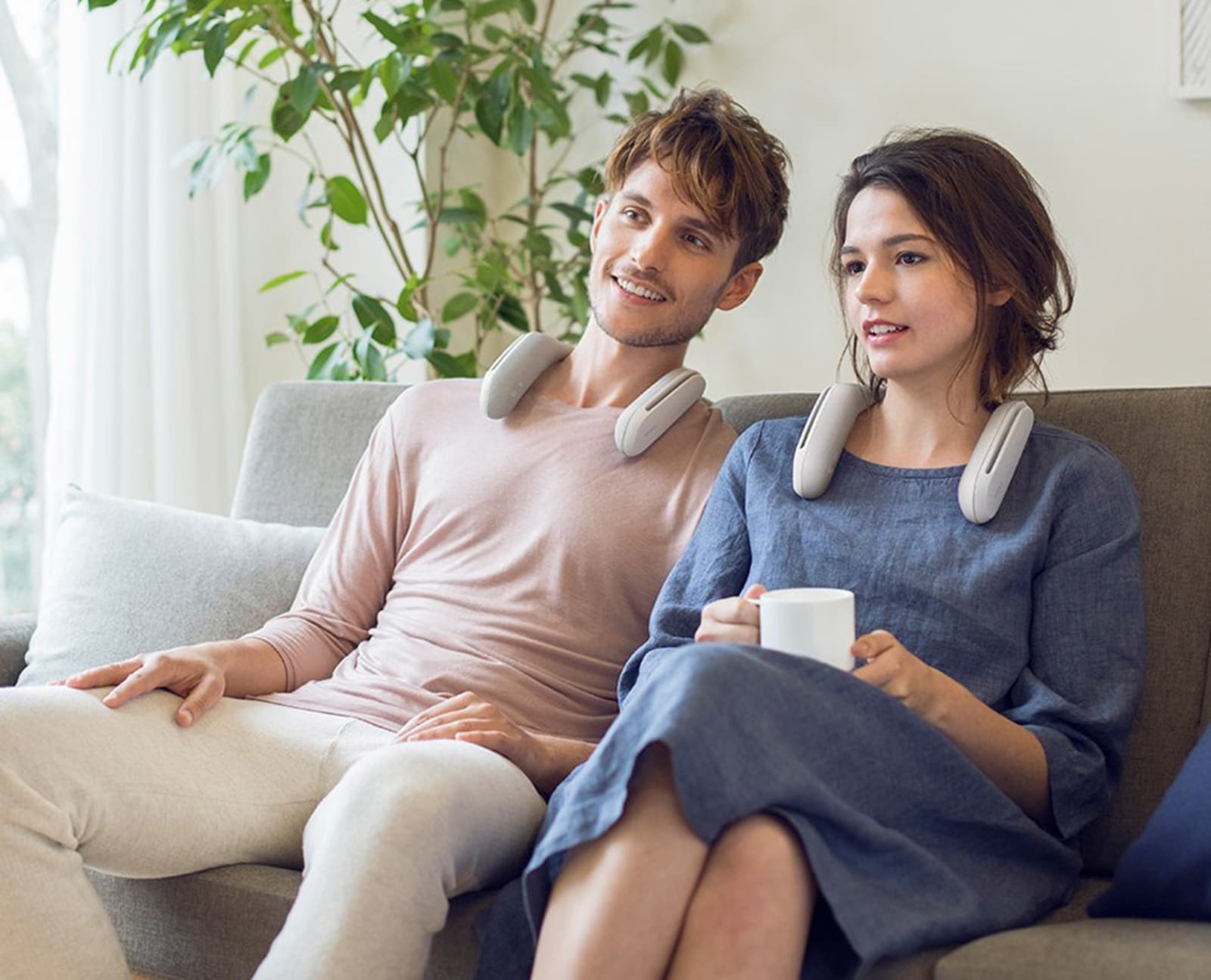 At least the Immersive Wearable Speaker comes with a charging stand, so it can look pretty when it's not in use.

The speaker sounds fine for music, TV and movies, but for the price it left me wanting. FKA twig's "Fallen Alien" enveloped me with its luscious soundscape, but the haptic vibration couldn't make up for the fact that I was losing a considerable amount of detail. I've listened to that song several times on pricey headphones and my home theater setup, and the Wearable Speaker simply didn't feel as satisfying. And it was similarly dispiriting while watching HBO's Watchmen, a show that's driven by a thumping Trent Reznor and Atticus Ross score. I couldn't wait to put on a pair of headphones to finish the episode.

The Immersive Wearable Speaker could be useful for older users who want to hear their favorite shows without donning headphones, and without cranking up the TV volume. It's also ergonomic enough to wear comfortably for hours on end. But the vast majority of consumers are better served with wireless headphones, earbuds, or in the case of TV viewing, a decent soundbar. I've had better audio experiences walking around with cheaper Bluetooth speakers, like the UE Megaboom 3 ($200). 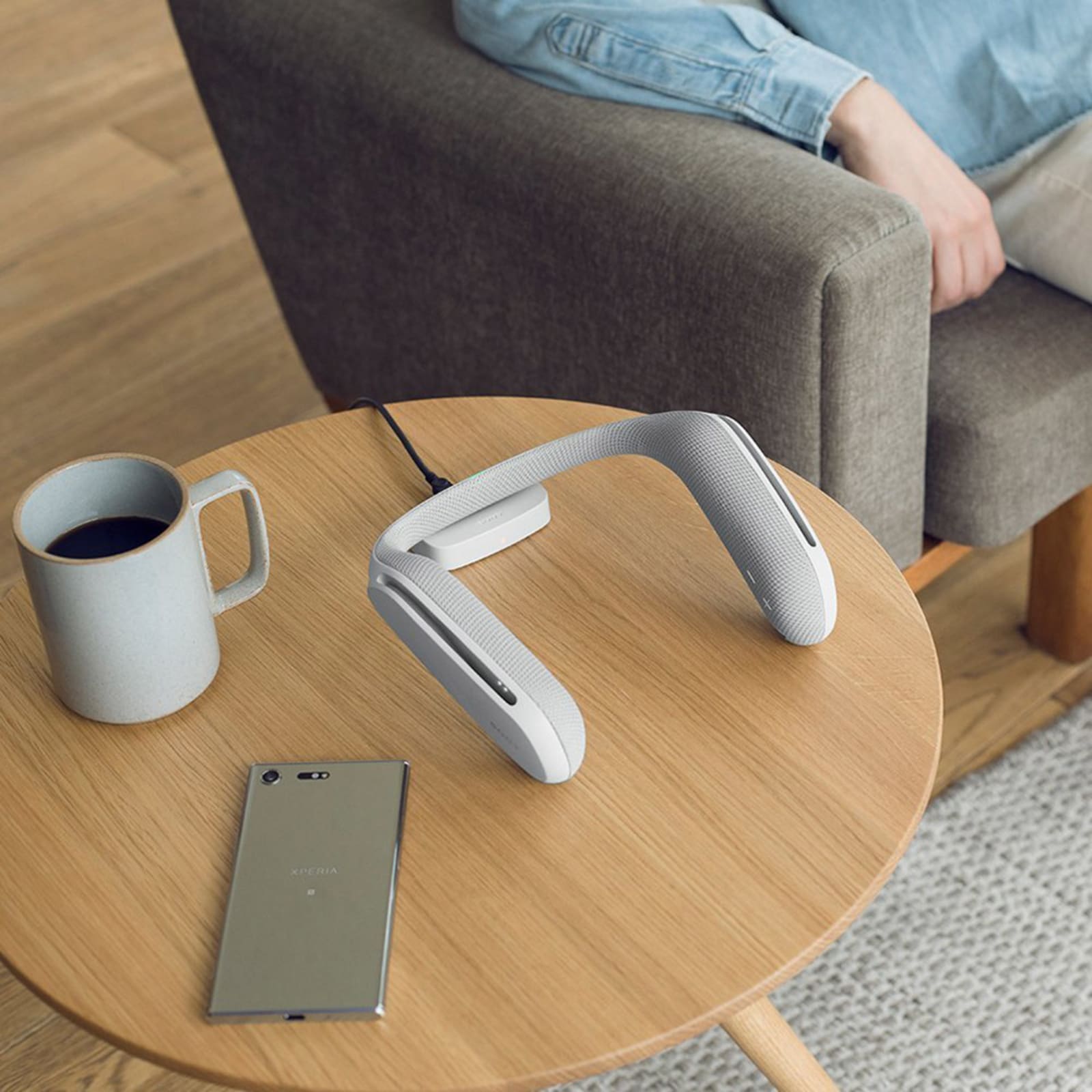 What's truly infuriating, though, is the eventual $300 price. (Update: Sony announced an early bird deal for $250 after this post was published.) That puts the Immersive Wearable Speaker at just $50 less than Sony's excellent WH-1000XM3 headphones, which are still my favorite pair of noise canceling cans. Sony, seemingly aware of its limited appeal, is only selling the Immersive Wearable Speaker through its Direct site. That's not too surprising, because I'd imagine most Best Buy shoppers wouldn't know what to make of it. (At the very least, I'd expect plenty of returns once people realize it doesn't support Bluetooth.)

Making things even stranger is that third-party sellers have been importing the Immersive Wearable Speaker for a while now. The top Google search result for "SRS-WS1" is an Amazon listing for $219. Sony tells us that's an unauthorized reseller, so buyers won't get an official warranty, but I'd imagine anyone really interested in this thing would rather save $80. But seriously, if you're actually considering it, maybe have a friend try to talk you out of it first.

All products recommended by Engadget are selected by our editorial team, independent of our parent company. Some of our stories include affiliate links. If you buy something through one of these links, we may earn an affiliate commission. All prices are correct at the time of publishing.
View All Comments
Sony's baffling wearable speaker heads to the US