This Angry Birds 'Venting Machine' is made for you to attack

It's one way Rovio is celebrating Angry Birds' 10th anniversary.

Rovio is aiming to do something a bit different for the tenth anniversary of Angry Birds on December 11th. What started out as an addictive mobile iPhone game has morphed into a multimedia giant, spanning two films, virtual reality and tons of merchandise. Now, together with the creative firm Droga5, the company wants to let let you express anger in real life with its "Venting Machine." It's exactly what it sounds like: a vending machine that you can punch, shake and shout at in the middle of Times Square's maelstrom of activity. Once you're done, you'll get a small prize that'll hopefully help you chill out a bit.

It's all part of Rovio's "Bring the Anger" campaign, which also includes the "Rage Rider" electric scooter. In Angry Birds 2, Rovio is pushing players to take out as many pigs as they can during November, which will lead to a $100,000 donation to UNICEF's Education in Emergencies fund. It turns out, those irate birds can also lead to a bit of social good.

During a brief demo at the 10xBeta labs in Brooklyn, where the Venting Machine was built, it made a striking first impression. It looks like a giant version of Red, the most iconic Angry Birds character, complete with a pair of bouncy feathers up top. The machine is covered in a soft foam material, with extra padding along the front to withstand your fists, and it has a large screen in the center. It's comfortable to punch, and every hit also lights up an LED to show you've made some damage. (Kicking isn't allowed, since it'll be too hard to clean regularly for a public event.) 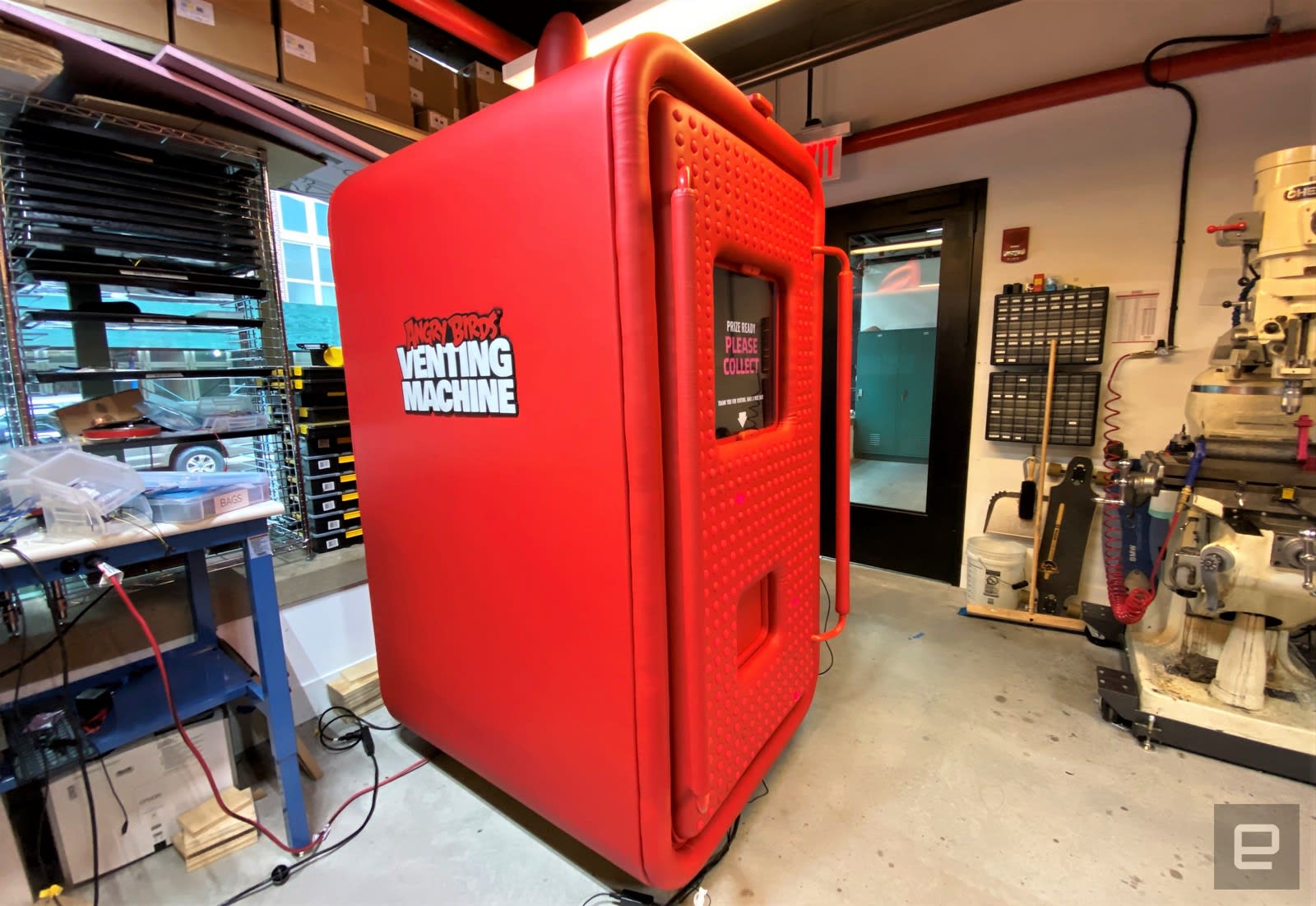 I gave it a few big shakes by grabbing the handle bars up front, and I was impressed by how stable it felt during all of my thrashing. The machine also quickly detected my shouts -- though I had a lot more fun physically interacting with it. Several cameras on the front of the Venting Machine captured my session and gave me a quick replay when I was done. Lucky Times Square participants will also see their footage show up on a nearby billboard.

The Venting Machine will only be available for one day -- Thursday November 21st, between 12 PM and 8PM -- but it'll be hard to miss with WWE star The Big Show putting it through its paces. Rovio also plans to have YouTube personalities like Deestroying and Team Edge stop by for the festivities. The company isn't saying if the Venting Machine will be making any other appearances just yet, but I wouldn't be surprised if it eventually pops up elsewhere.

All products recommended by Engadget are selected by our editorial team, independent of our parent company. Some of our stories include affiliate links. If you buy something through one of these links, we may earn an affiliate commission. All prices are correct at the time of publishing.
This Angry Birds 'Venting Machine' is made for you to attack
Angry Birds
Droga5
gadgetry
gadgets
gear
robots
Rovio
Venting Machine