But the price of the B1 and B2 is as steep as the inclines they can conquer.

The age of automotive electrification is once again upon us. Startups like Rivian and Lordstown are joining industry stalwarts like Ford and Hummer in developing the next generation of EV SUVs and pickups. But none of them can compare to the sheer power and utility of the Bollinger B1 and B2, which the company showed off this week at the 2019 Los Angeles Auto Show.

You might remember Bollinger from the 2017 LAAS when the company debuted its initial 2-door EV truck concept. Well, two years later Bollinger is back with two new models each with 2 additional doors. There's the B1, a 4-seat sport utility truck with an enclosed rear end, and its sister, the B2, a sport utility pickup.

From the quarter panels forward, the vehicles are identical. Both are equipped with a pair of electric motors producing a total 614 horsepower and 668 ft-lb of torque. That gives it a 0-60 in 4.5 seconds with a 100 MPH top speed -- not quite as quick as the Rivian R1T's 3 second score but still faster than virtually any gas-powered truck currently on the market. The B's are just as capable off-road as they are on. Each offers 15-inches of ground clearance which can be raised or lowered an additional 5 inches. Their hydropneumatic suspensions self-level when hauling heavy loads (they're rated up to 5,000 lbs of cargo and 7,500 lbs towing capacity) and both offer AWD.

"The way the suspension is done, it'll feel the same way driving it whether you're carrying 5,000 pounds [of cargo] or not," Robert Bollinger, the company's founder, told Engadget.

The Bollingers get all that power from a massive 120 kWh battery pack set under the vehicle's floor using the same basic "skateboard" design as the Rivian. 120 kWh is simply massive. It's 20 percent larger than the biggest battery pack Tesla sells. That translates into an estimated range of 200 miles or around 10 hours of off-roading. What's more, each comes equipped with a 15 kW inverter, allowing you to run anything from phone chargers to power tools through the vehicles' nearly dozen 110V outlets.

Unfortunately, that huge battery pack also translates into exceedingly long charging times. Even with a Level 2 (240V) charger, you're looking at a good 8 - 10 hours to fully replenish the system. However if you can get access to a Level 3 commercial charger, you can completely refill the Bollinger's batteries in just 75 minutes.

The B's are not available as kits, Bollinger will only be selling them as finished vehicles, but that doesn't mean you won't be able to customize it to your heart's desire. Pretty much everything on the B's is removable. That includes the windows, the doors, the roof panels, the bumpers and the rear seats -- even the windshield if you're so inclined. You can practically strip these trucks to the frame and they'll still function. Most of the body is made from aluminum to keep the weight down, though the company is looking into offering carbon fiber components in the future, as well as potentially a cab-on-chassis design where customers can customize their vehicle from the ground up.

If you do take out the rear seats, the B1 and B2 offer a total of 113 cubic feet of cargo space. And if you need to haul extremely long items, say 12-foot lengths of 2x4s, the Bollingers offer a clever passthrough system running the length of the vehicle. Since there's no internal combustion engine in the way, you can flip down both the rear and the front tailgates to accommodate the long load. 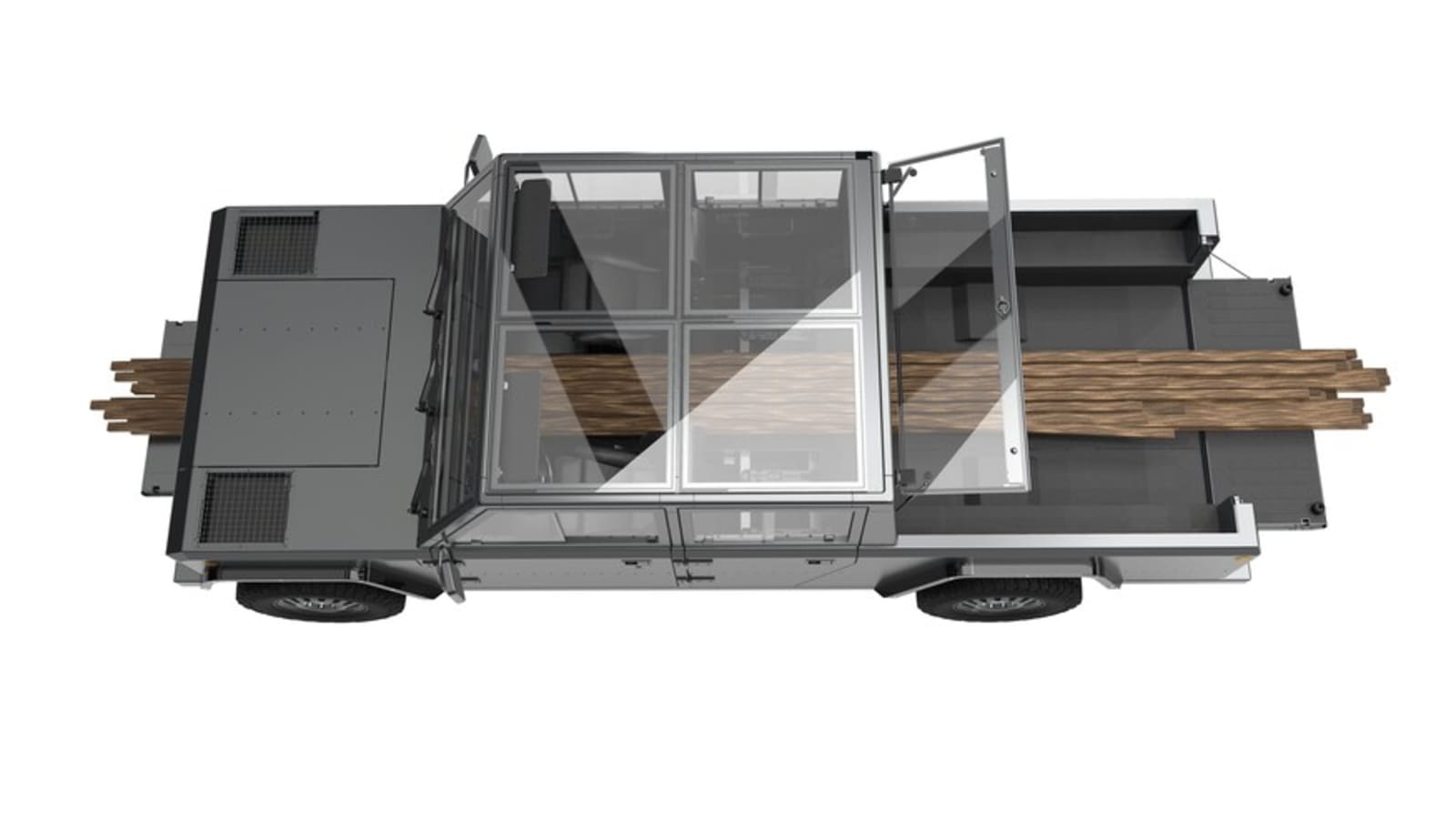 The Bollingers are massive vehicles. They're rated as Class 3 trucks, putting them on par with the likes of the Chevy Silverado 3500 or Dodge Ram 3500 (minus the dually). As such, the Bollingers do not come with airbags. "We simulate side pole impacts for both passengers and batteries," Bollinger said. "Rollover is a big one [on account of the off-roading capabilities], and we also have to crash test for a number of things. We're going to do a lot of due diligence safety work on top of what [the NHTSA] requires."

The company is currently ramping up production on the B's and hopes to have that completed by the end of next year with the first batch of deliveries made to pre-order customers by early 2021. If you want one for yourself, however, you're going to need to pony up $125,000 for either model.

All products recommended by Engadget are selected by our editorial team, independent of our parent company. Some of our stories include affiliate links. If you buy something through one of these links, we may earn an affiliate commission. All prices are correct at the time of publishing.
Bollinger’s badass EV utility trucks arrive in 2021
B1
B2
Bollinger
breaking news
Class 3
EV
gear
laautoshow2019
transportation
truck