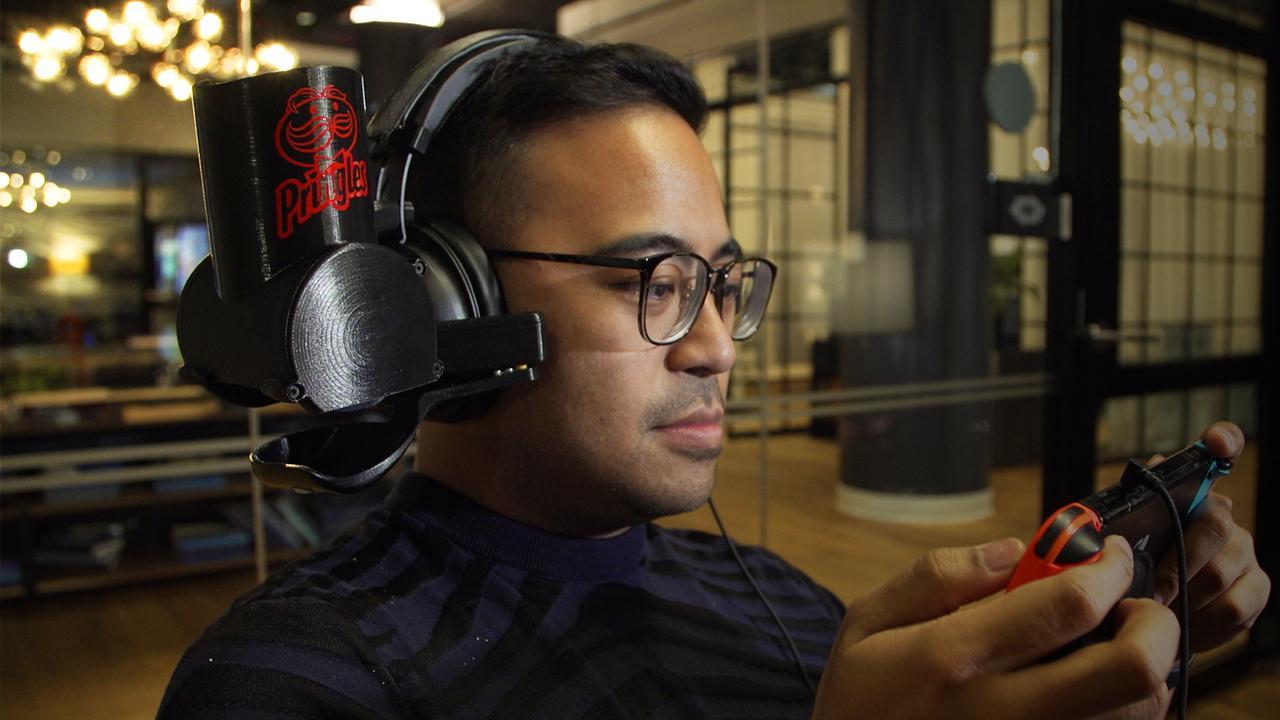 When one is deep in the throes of a game, human needs fade into the background until absolutely necessary. So how, then, does a person in that precise moment balance their dual priorities of making in-game progress and managing their hunger? Well, Pringles' answer was to 3D print a slew of components and rig them onto a Razer gaming headset so that a motorized arm swivels into position in front of a player's mouth with a delicate potato crisp perched enticingly upon it.

Alright, fine: Maybe "enticing" isn't the right word. Pringles are insubstantial, vaguely potato flavored wisps of air crammed into a cardboard tube. Their snackability quotient is high, but is anyone ever really satisfied after eating these things? And as you might have already guessed, the Hunger Hammer is patently ridiculous as a solution to eating while gaming, not to mention pretty awful at what it's meant to do.

It is, however, hilarious, which makes it pretty much gold if you're a) a writer trying to liven up a day at the office or b) a company trying to make nice with streamers to promote a tie-in with the new Gears of War game.

By now, it should be clear to anyone that the Hunger Hammer isn't meant to be taken seriously. It's a gag! But since it deals with snacking, a topic very close to my heart, I have no choice but to take it seriously. (Perhaps overly so.)

The Pringles people referred to the headset as a "beta prototype" to help set expectations, and the label certainly fits. Yes, the headset works for games. And yes, that flimsy arm does get a Pringle or three into the general vicinity of your mouth. The caveats are many, though. It's surprisingly loud, which doesn't seem great when you're trying to really get in the zone, and since you can't really adjust the arm at all, it sometimes just slowly plonks a Pringle into your nose. Worst of all, you have to push a button, either on a remote or on the headset itself to have a crispy potato saddle delivered to your maw. (Had we been allowed to keep the Hunger Hammer, I would've liked to try hacking it to accept voice commands instead.)

I will say that the headset does improve the Pringles-while-gaming experience in one important way: Since you have to manually load Pringles into a feeder chute, you don't have to risk getting your hand stuck inside a tube to get at those dang chips while you're racking up kills. Otherwise, yeah, it's precisely the sort of snort-inducing techie gag gift I wouldn't have been surprised to see in a Brookstone growing up. (If you're really curious about technically clever feeding contraptions that also double as publicity stunts, I'd also like to direct your attention to this human-sensing popcorn cannon.)

As is often the case, though, the product becomes much less important than the good times it makes possible, and I got to burn part of an afternoon watching our editor-in-chief Dana get donked in the face with chips and roping in random coworkers to be in a weird video. That was time well spent, so I guess I owe the Pringles folks some degree of gratitude. Thanks, you weirdos -- now that that's all over, can you bring your Paprika chips to the US, please?

In this article: design, food and drink, food-and-drink, foodanddrink, gaming, gear, video, diy, do it yourself, doityourself
All products recommended by Engadget are selected by our editorial team, independent of our parent company. Some of our stories include affiliate links. If you buy something through one of these links, we may earn an affiliate commission.